I wrote my first HenBlog post in May of 2006, and I’ve been writing several times a week ever since. I keep thinking that I’ve covered everything there is to say about backyard chickens, and then something new crops up in my flock, or I come to a better understanding of what I’m seeing, or there’s simply something amusing that I want to share with you. Nine years, and I’m still enjoying what I do here.

I added The Vintage Hen Blog (that’s the space I’m writing on now) to showcase my collection of vintage agricultural and animals photographs, like this. 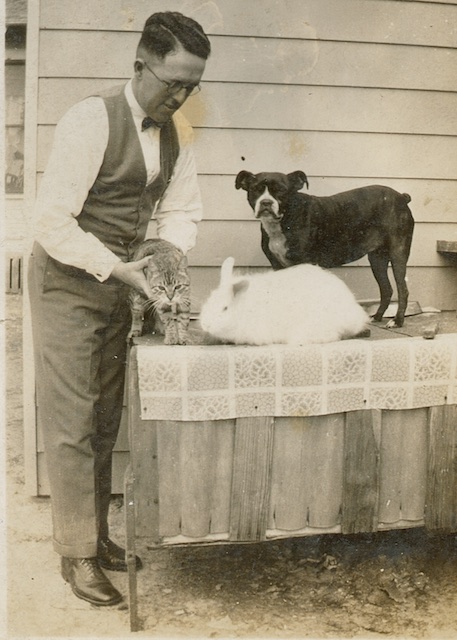 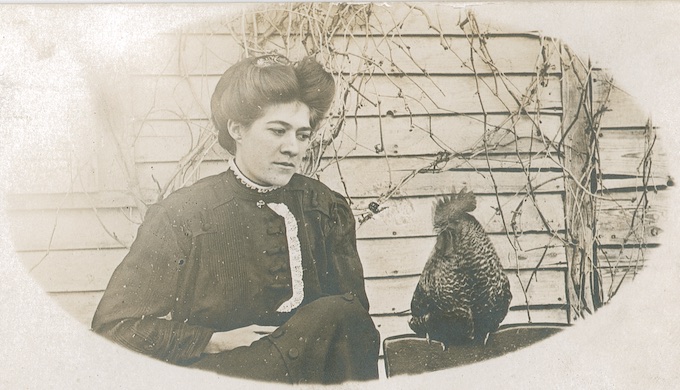 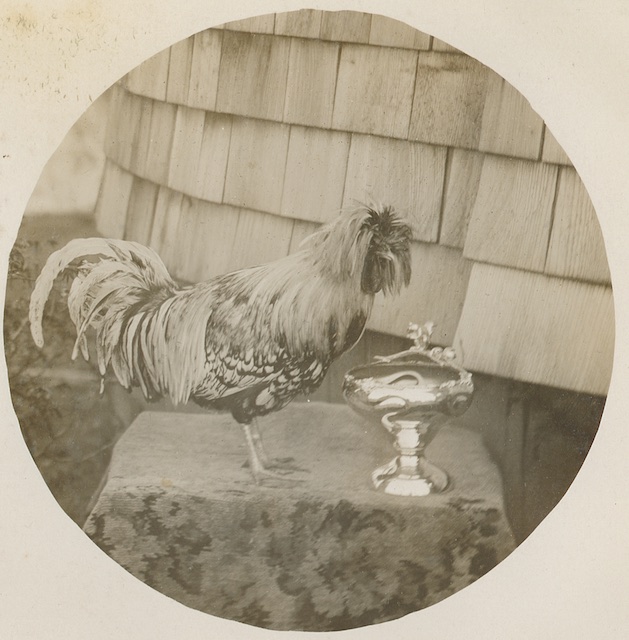 I collected my favorite photographs and put them into books of postcards, which are available in the HenCam store.

I’ve come to realize that I don’t need to have this separate blog, and in an effort to streamline things, I’m combining this space with the HenBlog. All previous posts will be searchable on the HenCam archives through the “search” button on the right of the page. I’ll continue to share these old photographs on the HenBlog. In fact, writing this post makes me realize it’s been awhile since I shared these old images with you. Perhaps I should regularly post a vintage image each Thursday? What do you think?

I need to simplify things here, because I am hard at work on a new website – The Cooperative Horse – where I’ll be writing articles about horses, training, and deeper questions of how we relate to the animals in our lives. I’ll let you know when that’s up.

I’ve scheduled a Chicken Keeping Workshop on Saturday, June 20. It takes place here in my backyard in Carlisle, Massachusetts. You’ll get to tour the gardens, 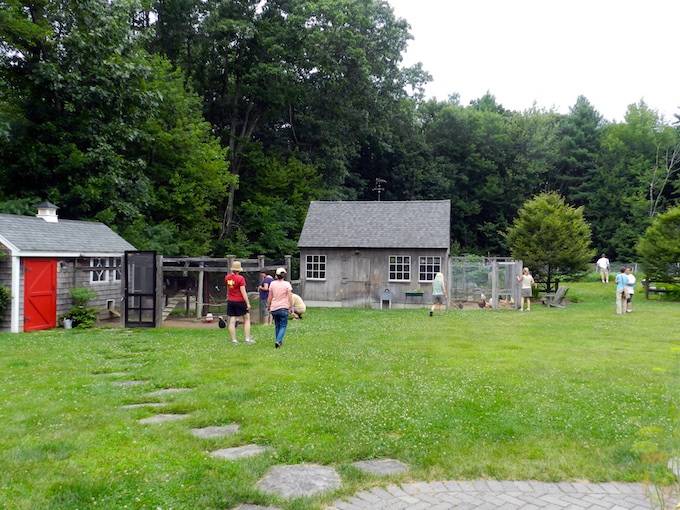 see how my barns are set-up, how I keep them clean, and where all of that manure goes (hint: compost!) 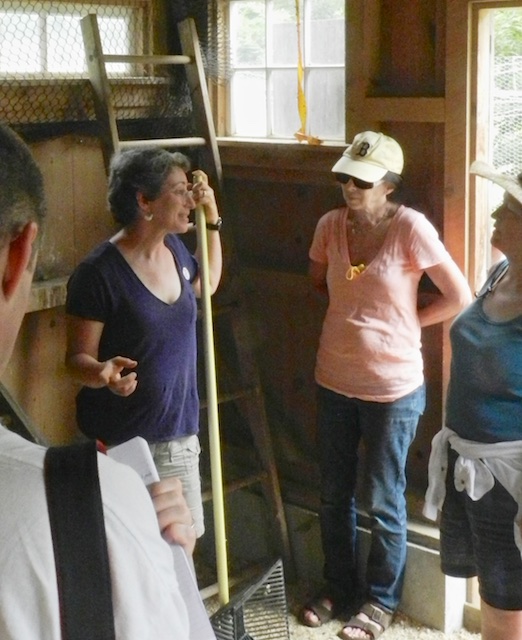 Half of the workshop takes place on the porch, where we’ll talk about chicken care, housing, breeds, and a wealth of other topics. There will be homemade iced tea and cookies to sustain you. 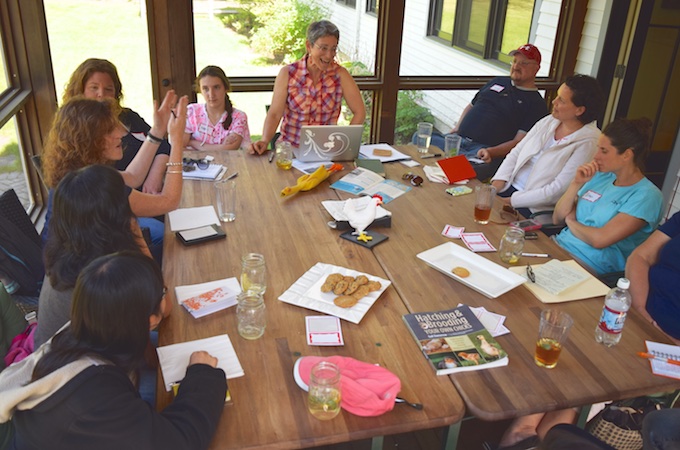 Everyone will get to hold a chicken! 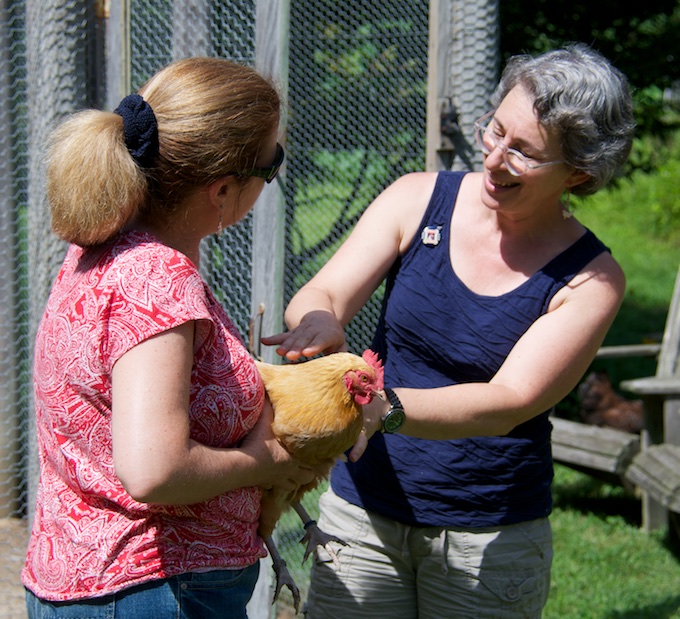 Space is limited to only fourteen participants, so sign up now. Details and registration on my Events Page.

If anyone is interested in an Advanced Chicken Workshop that afternoon, please let me know. I could add that to the schedule. The advanced class covers health and age issues in detail, as well as going more in-depth into chicken behavior.

What breed is Lily? 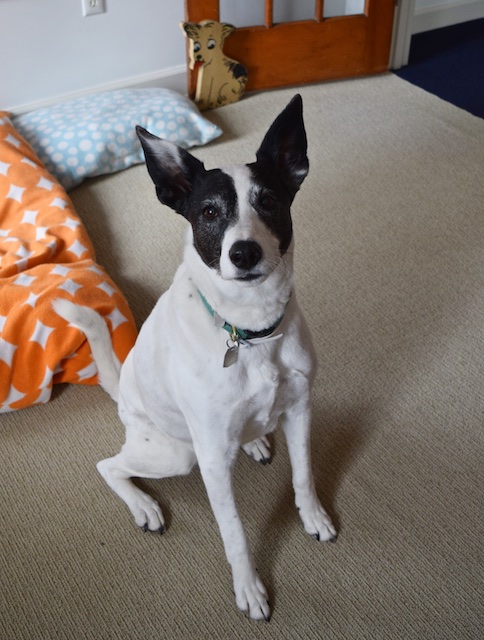 I got her from a border collie rescue, and yes, she’s black and white and the right size. Other than that, she has none of the traits one would expect in a BC. Lily has no urge to herd, and she doesn’t have the crouch and low posture of a BC. She does hunt. She air and ground scents. Going after prey, or chasing off a predator, Lily is a speed demon. She’s smart as can be, but her intelligence isn’t exhibited in the command-focused mindset of a border collie, rather, she’s an independent thinker. She’s hyper-vigilant and wary. I joke that if she was a person, she’d be on the internet with all of the other conspiracy theorists.

And then there’s Scooter. 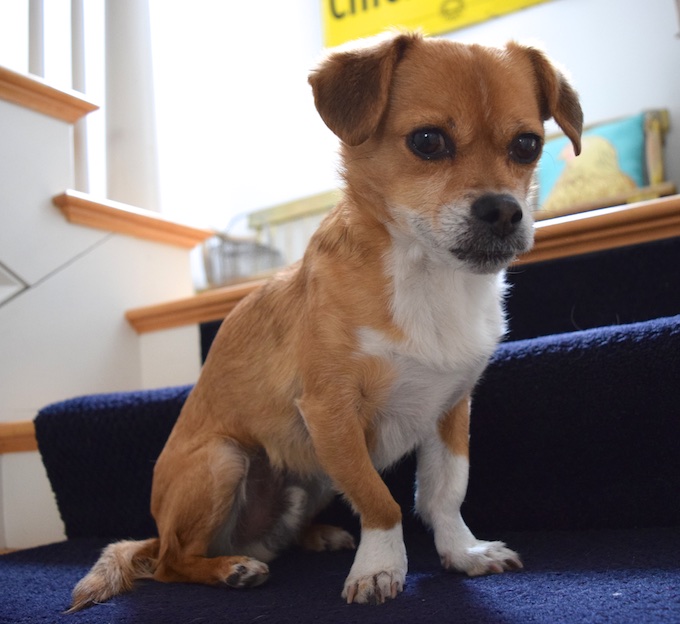 What could his parentage be? His mother was found on the streets of Hartford a day before she whelped three pups. Even skinny, she weighed 25 pounds. She had upright ears and the coloring of corgi. Scooter is 10 1/2 pounds of adorableness. Bow legs. Overshot lower jaw. Tucked up waist. Floppy ears. He is a dog of little brain, but what is there is sweet as can be. 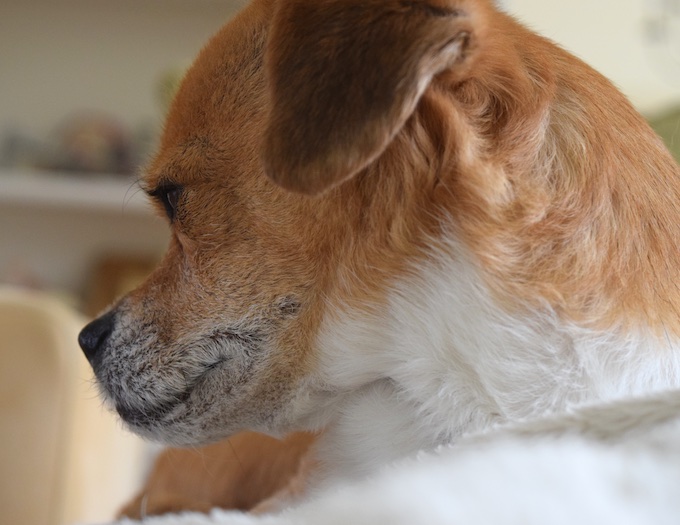 I bought two DNA testing kits. All it takes is a swab of the inside of the lip to get what the lab needs to run the report. Fifteen seconds.

Lily was sure that there was a plot behind this torture. She hid under the desk when I was done. 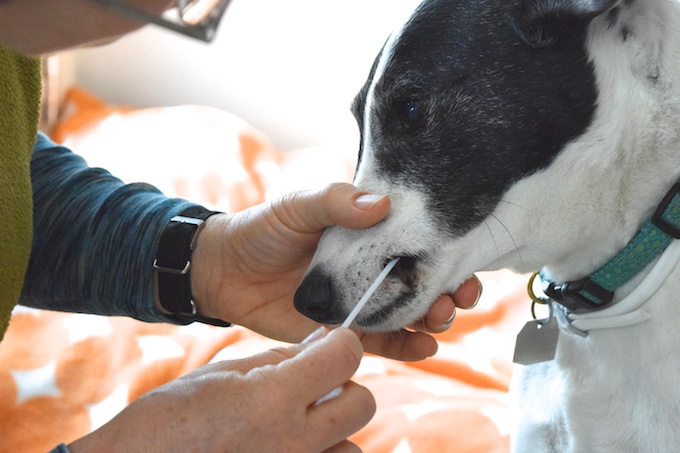 Scooter said that it felt weird, 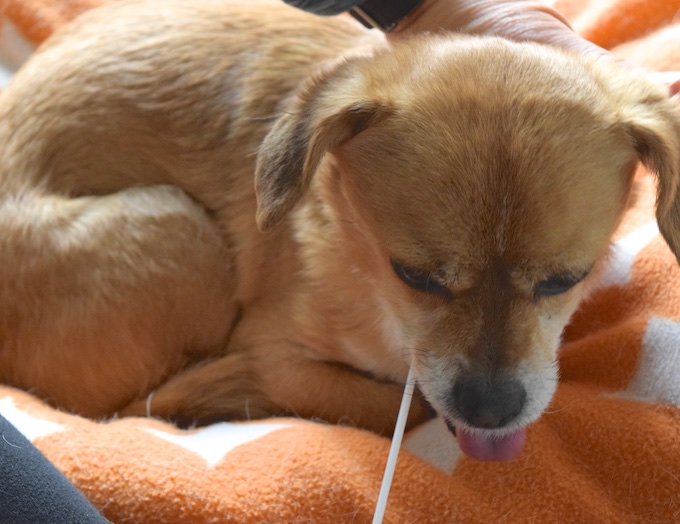 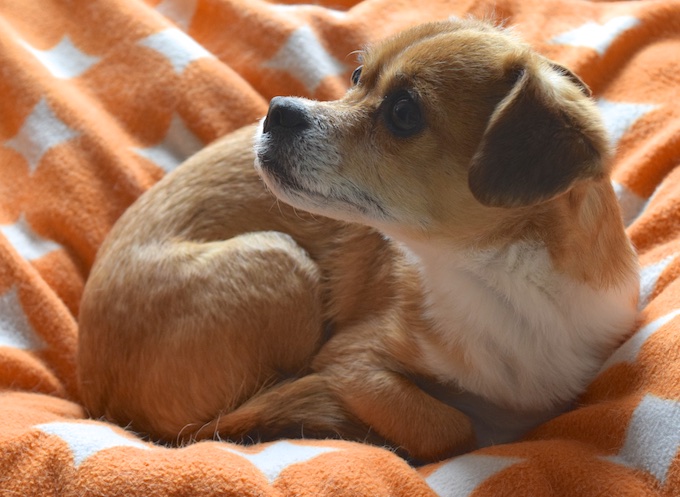 Your guess about my dogs’ lineages is as good as mine. We have a month or so before the results come back, so in that time, let’s have a contest! Whoever guesses the parentage will get a copy of my book, Vintage Dog Photographs. There will be two winners, one for each dog.

The winner will be announced in a post as soon as I hear back from the lab.

There’s still some snow in the shadows by the driveways, but these are in the front yard. I think that I can finally say that spring is here. 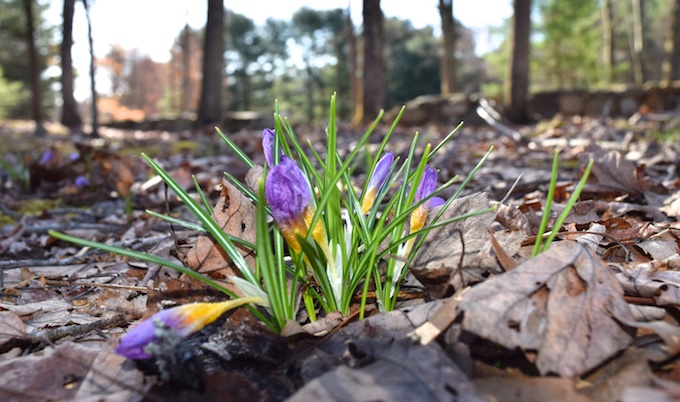 Yesterday I planted seeds: carrots, chives, scallion, spinach and lettuce. The garden still has a lot of tidying up and moving of compost and dirt before I can do the major summer planting, but, oh, how good it is to see this beautiful dark earth with that label stuck in! 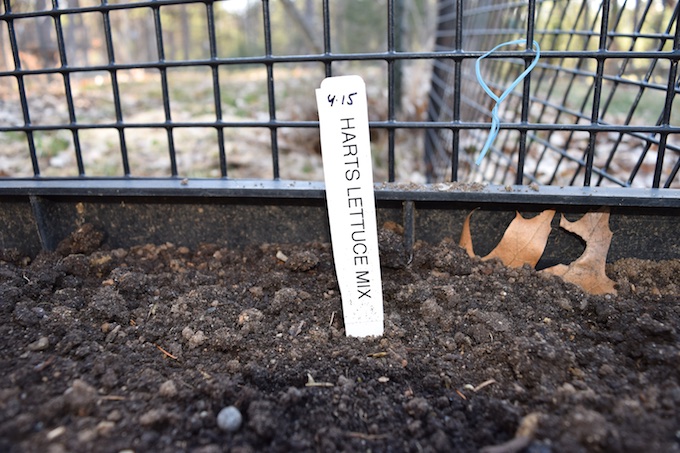 For the last couple of days, temperatures reached into the 60s. It tells you something about our winter that snow remains in the shady areas, 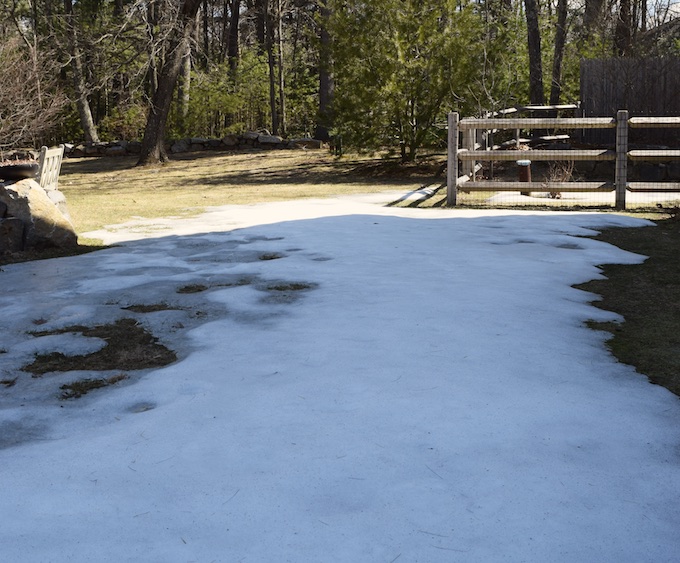 but a large swath of lawn is finally out from under the white stuff! Scooter knows what to do. Sunbathe. 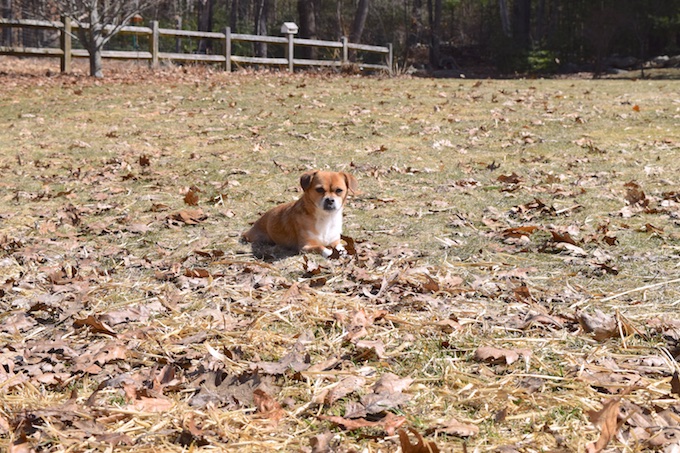 Lucky dog. This weekend, I had other things to attend to. The barns got a good cleaning and an airing out. 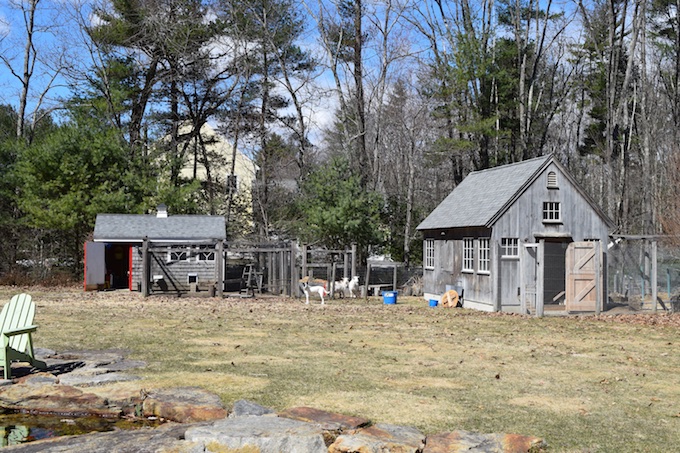 It’s not yet time to do the thorough spring cleaning, but on Saturday I took stock of what needs to be done now that the long and snowy winter is over.

Some plants will need tender loving care. Branches broke under the weigh of the snow. Mice ate bark. But the climbing hydrangea is astoundingly vigorous and sturdy. I clip it back several times a year, if I didn’t it would overwhelm the Little Barn and even lift the shingles from the walls. 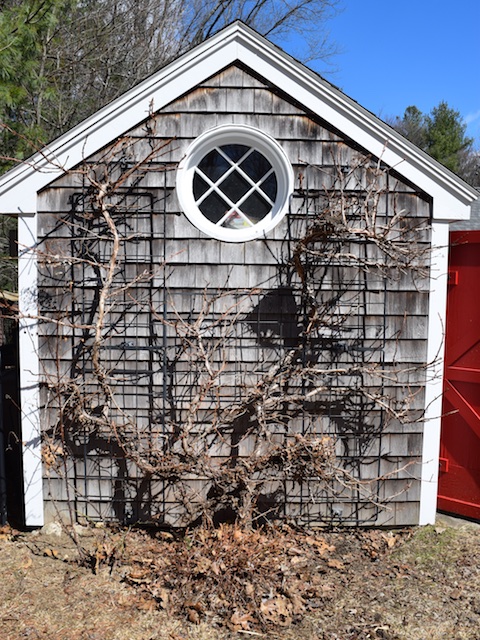 This is the first plant to show signs of spring life. 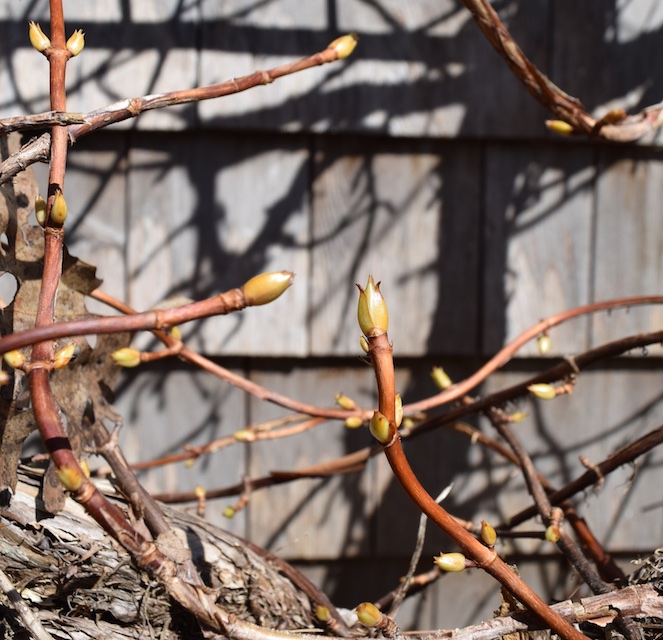 Looking closely, it revealed a secret from last summer. 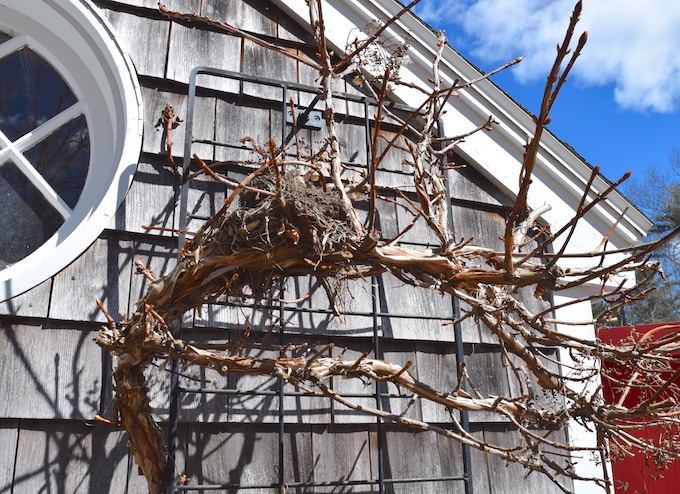 I had no idea that birds had made a home in its branches. 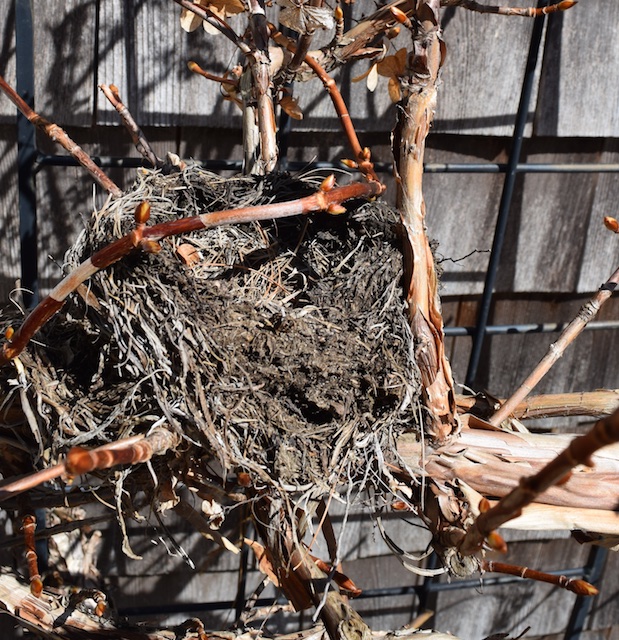 I’ll clear this nest out, prune the plant, and wait to see who moves in this spring.