I’m a great believer in animal training. The animals that we live with should have manners so that they are safe and a pleasure to be around. My goats know the word “off,” which tells them that I won’t come into their stall unless all four feet are on the ground and they back up from the door. Lily sits while her dinner is put in her bowl. I even trained my chickens to pose for the camera so that the tableaus for Tillie Lays an Egg could be photographed. One of my best friends has trained everything from dolphins to alligators and I’ve learned much from her.  And yet, Lily and the hens can not be let out together. I’m realistic about what I can do and what will stick in Lily’s brain.

Some dogs are absolutely fine with chickens. 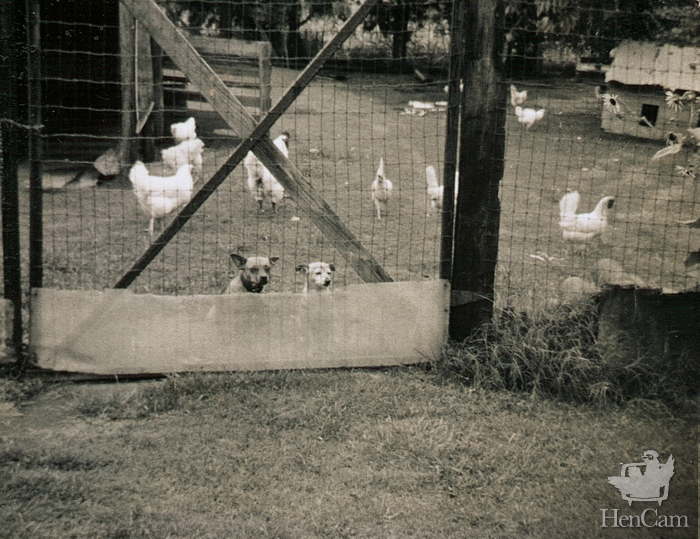 When I first got chickens, I had a dog named Nimbus, who was likely an Aussiej/Husky mix. She was a good hunter. But she also had impulse control and was a joy to train. It was easy to teach her not to chase the chickens. I did this by rewarding her for being still and calm around the hens. I never was, however, able to get her to not eat the poop.

Lily spent the first half-year of her life running wild on a southern farm, where I think that much of her diet consisted of hunting rabbits and such. She is mostly rat terrier and is reactive to movement. I’ve trained her not to charge and bark at the chickens. But, if there’s a sudden movement, a switch in her brain flips and she takes off after it. A squawking, running hen is sensory overload for Lily. With hours and hours of training I could possibly overcome her natural tendencies. I don’t have those hours. And it would never be 100%. So, I rely on fences to keep the chickens safe.

I’m often asked whether a dog will get along with chickens. Yours might. Or not. Don’t assume that all will be well. Put in the time to train the dog to lie down calmly while the hens are near. Teach your dog to come away from the hens when called. Don’t teach through fear and punishment (with water sprays and leash jerks) as that only serves to teach the dog that chickens are something to get angry over. And always assume that a friend’s dog, or your neighbor’s, or the stray wandering through your yard, will be chicken killers.

I’m currently introducing Lily to Phoebe, the new bunny. Lily still hunts and kills wild rabbits. She took one whiff and look at Phoebe in the pen and went into coursing mode. I asked for a down. 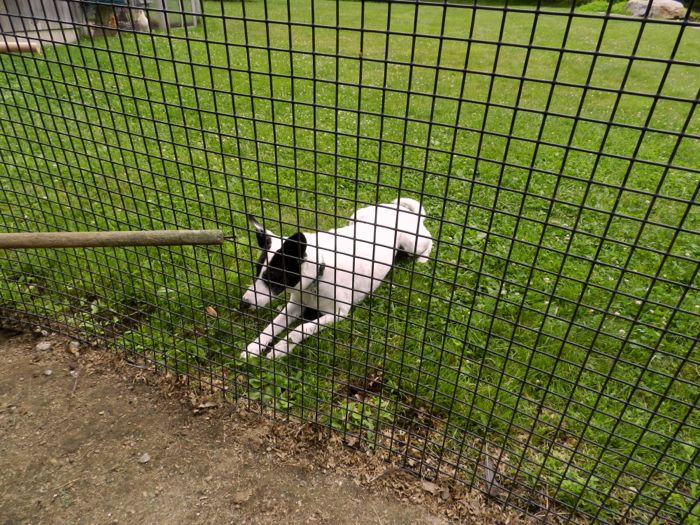 Every time Phoebe ran past, I rewarded LIly for calmly watching. This is what I did to train Lily to accept Candy. Candy discovered that she was quite safe in her pen, and would tease Lily, running the fence line, challenging Lily to chase her. Poor Lily. Those rabbits make it hard for Lily to be a Good Dog. We’ll have to wait to see if Phoebe has the same sense of bunny humor.