For the last year I’ve been involved with a forward-thinking nursing home director who understands that animals can enhance, engage, and delight the lives of her facility’s residents. Ellen Levinson appreciates what dogs can bring to an institutional setting. She has two of her own that work alongside of her. 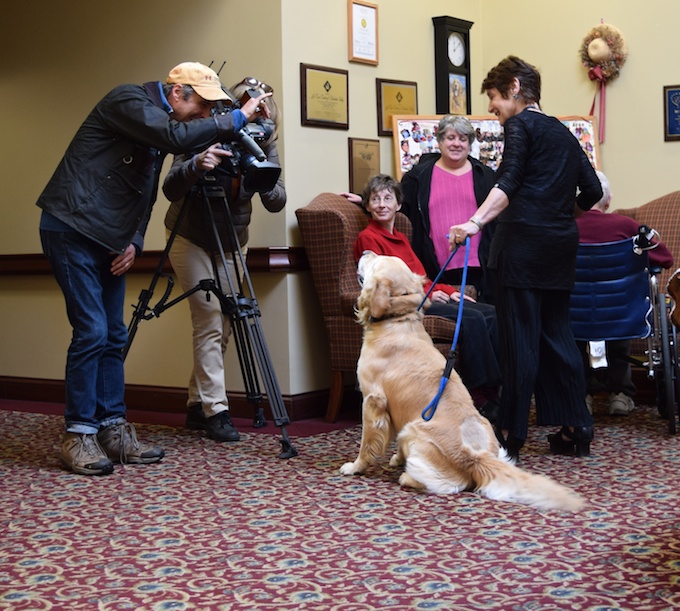 But Ellen wanted to go beyond traditional therapy animals that are brought to a bedside, and then are taken away. The nursing home is owned by a large corporation, based in Texas. Somehow Ellen convinced the accountants that bigger, permanent animals were worth paying for. The home is sited on a large piece of property. There is a field. She had it fenced, built a barn, and installed llamas and goats. Then Ellen came to one of my chicken keeping workshops, decided that chickens were essential too, and I was brought on to establish a small flock of hens on the grounds.

Ellen believes that having animals living on the premises gives the residents a sense of control. They get to choose when they see the animals and how to interact with them. Some just look. Some touch. Physical therapy sessions can take place outdoors, on a track around the pasture. There’s a destination for the exercise.

Yesterday a camerawoman and a producer from Chronicle, the Boston ABC station’s long-running human-interest news show, came to Life Care.

They filmed the hens. In this photo you can see an occupational therapist encouraging her patient to stand up to get closer to the chickens. 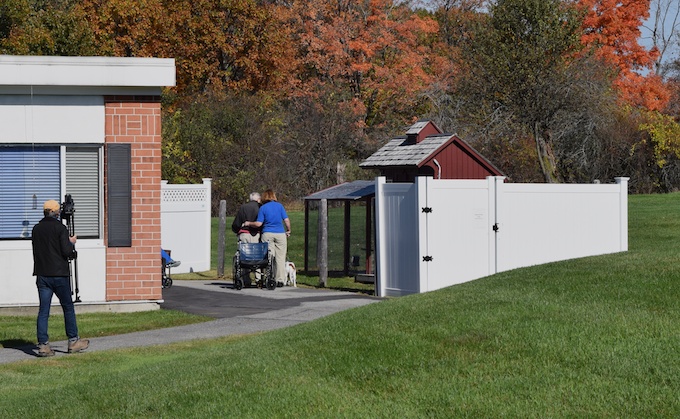 It was a beautiful fall day and so the patients were out on the track, viewing the animals, doing physical therapy, and getting fresh air and sunshine. 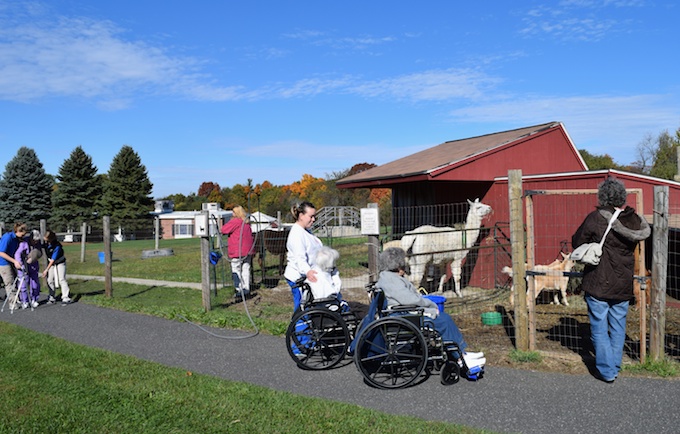 Llamas are unique creatures and Ellen needed someone who knew how to work with them, so Ellen sent one of her employees to “llama school.” This is the designated handler, 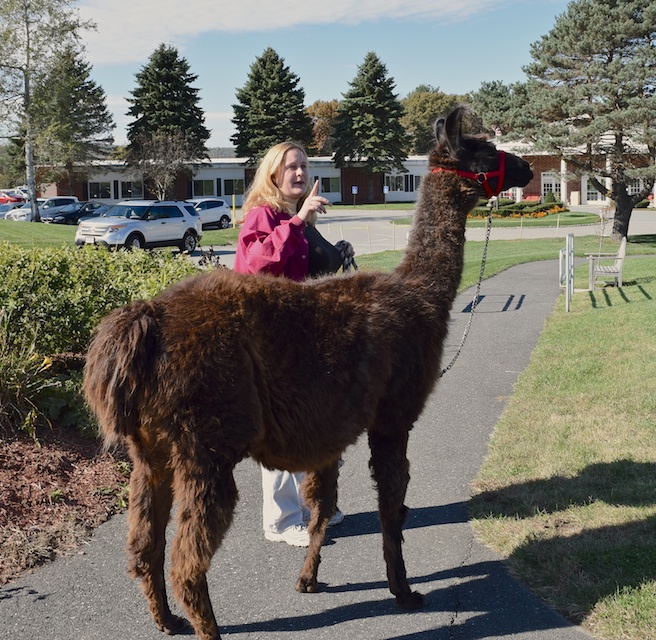 but anyone can pet Travis. 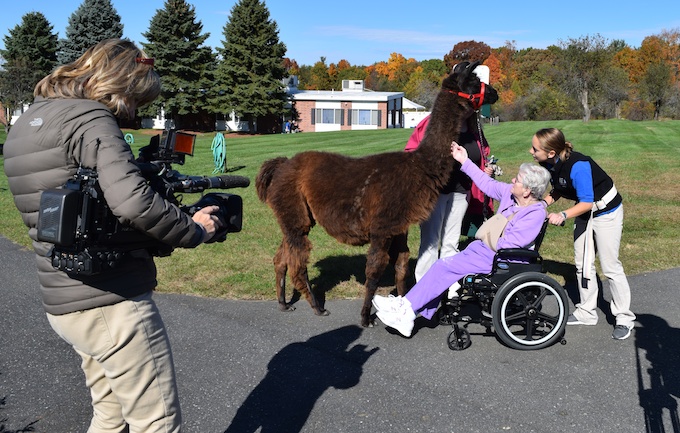 Not all of the residents can go outside. No problem. Travis comes in. 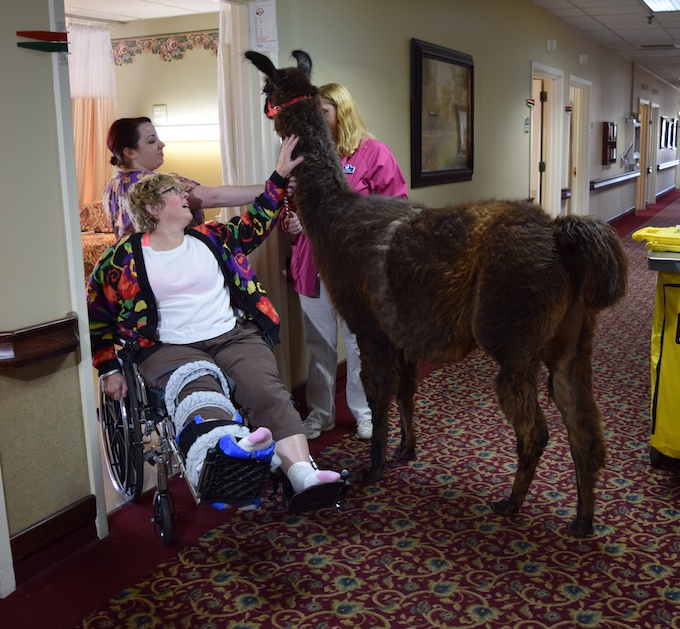 Animals bring the unexpected into a place where life is regimented by meal times, therapy sessions and visiting hours. My photographs failed to capture the sheer craziness and joy of the animals in this building.

Not only was Travis plodding on his camel-feet down the carpet, but there was this young dog in training learning to work with his occupational therapy owner: 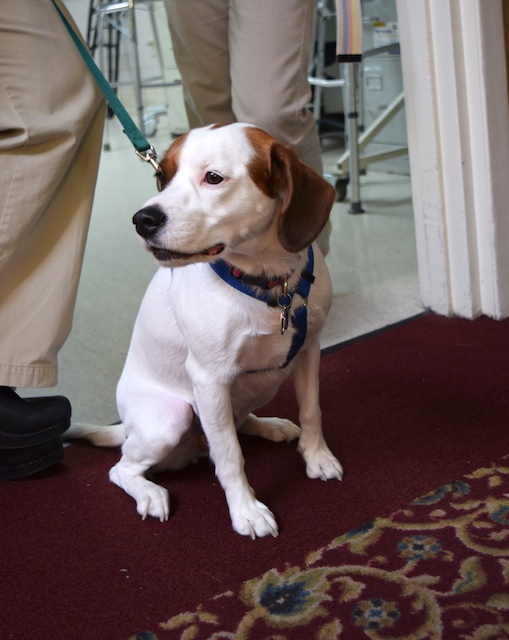 Along with Ellen’s two goldens,  there was this shaggy fellow spreading happiness: 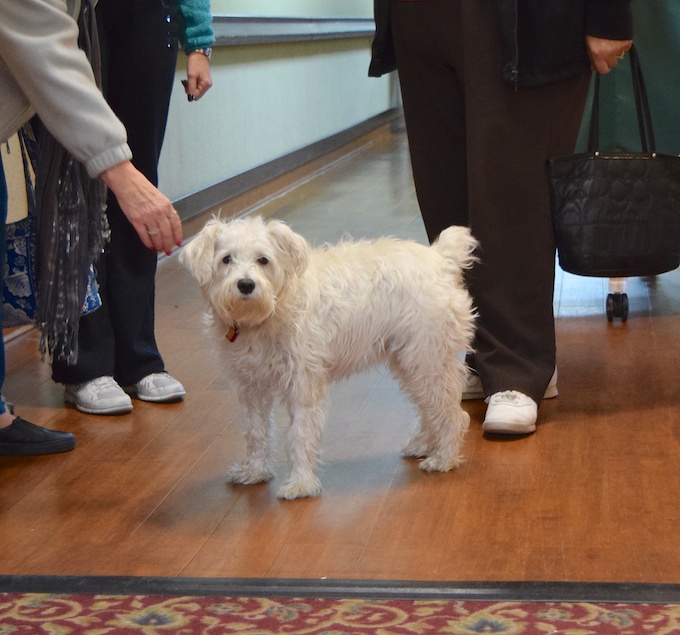 I was taking the whole the scene in and looked up to read this banner: 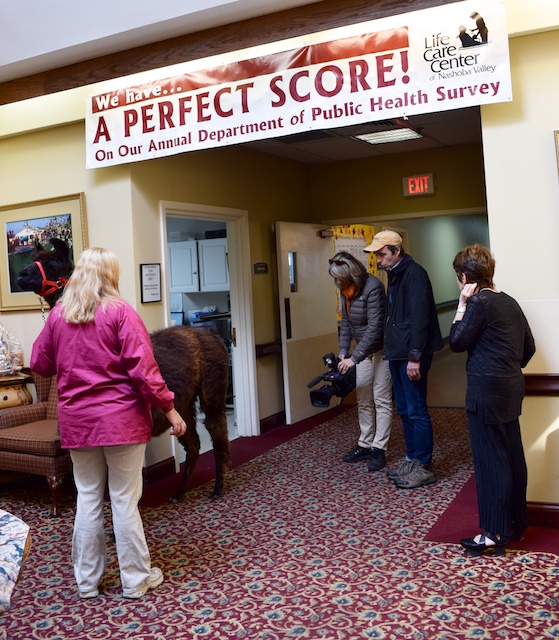 There’s a llama and four dogs in the building, and chickens and goats outside, and yet the facility gets a perfect score from the health inspectors. How wonderful is that?

The segment on Chronicle will air mid-November. I’ll let you know when it’s on.

Um, Ellen? I know all about horses :)

Every year I know it’s going to happen. The change of seasons. The trees change color. You’d think that I’d become blasé. I’m not.

Every year I’m gobsmacked by how spectacular fall in New England is. 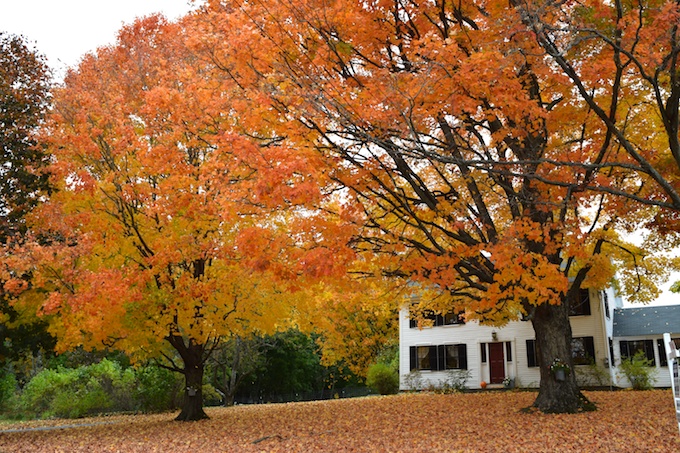 Isn’t it wonderful to have an excuse to use that word? The colors are really and truly just like this. 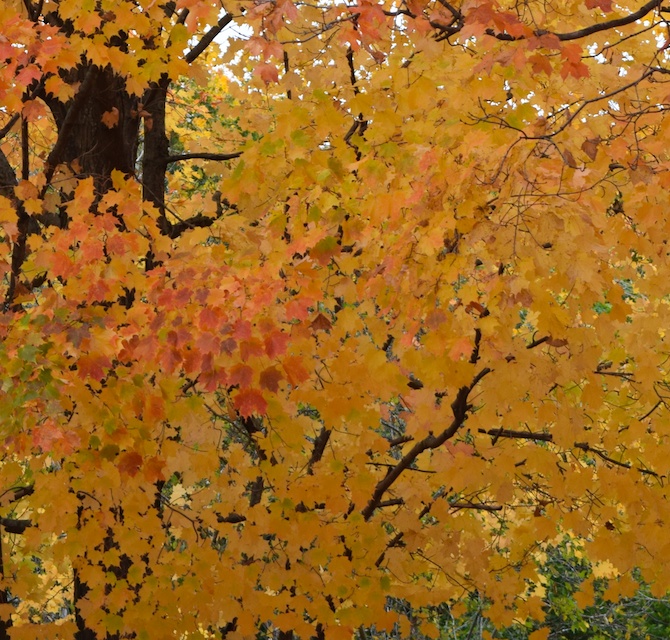 Three days ago there was a torrential downpour and the trees shed leaves. Last night was the first serious frost. We’re now past peak. But fields still look like this. 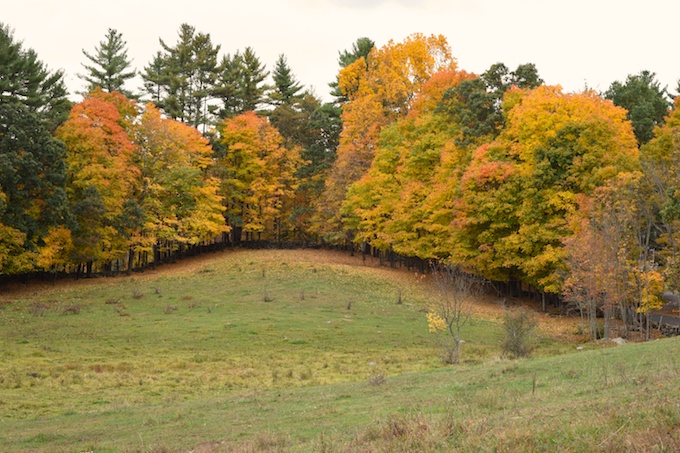 It’s pumpkin season. Bins of pumpkins are overflowing outside of supermarkets. 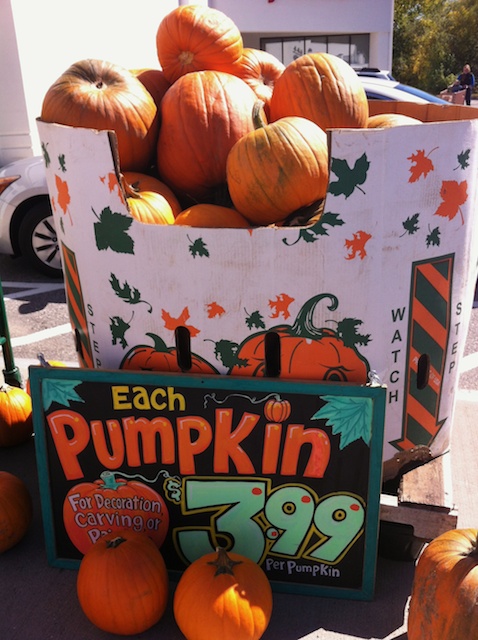 In order to compete, farmstands show off spectacular mountains of pumpkins. 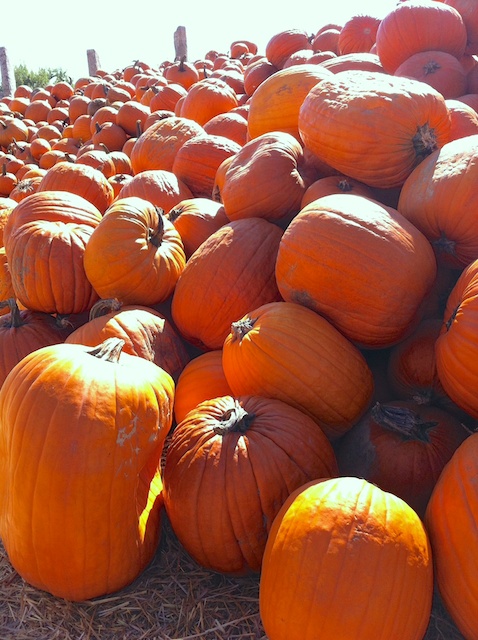 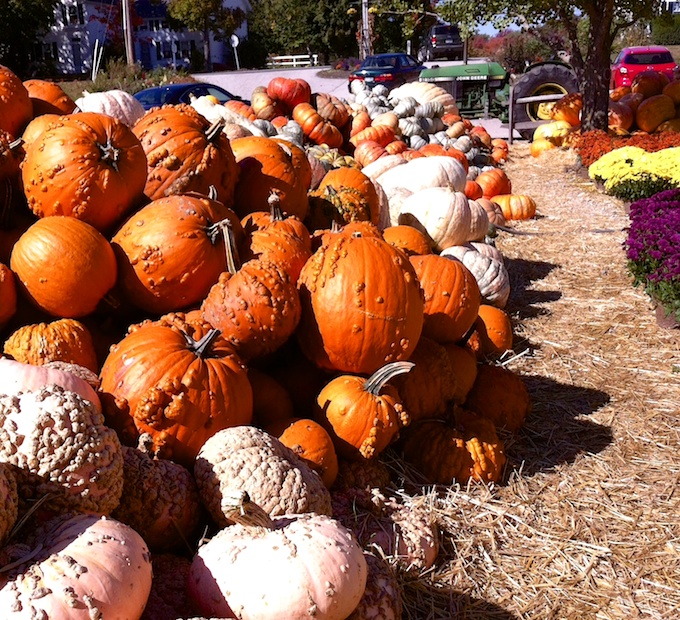 There are big pumpkins. If you buy one, they’ll help you load it into your car. But, how do you carry it out? I know about this dilemma. One year I bought such a pumpkin for a party game – guess the weight of the pumpkin – we did a lot of guessing trying to lug it to the front yard! 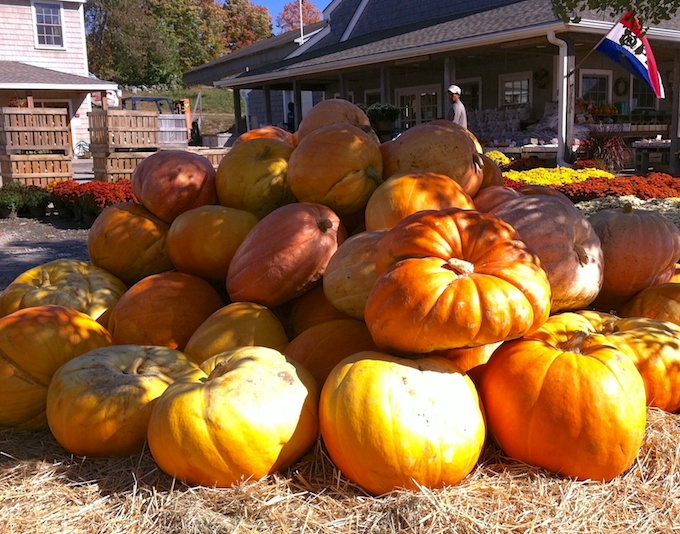 Some pumpkins require a moving company to carry to your home. 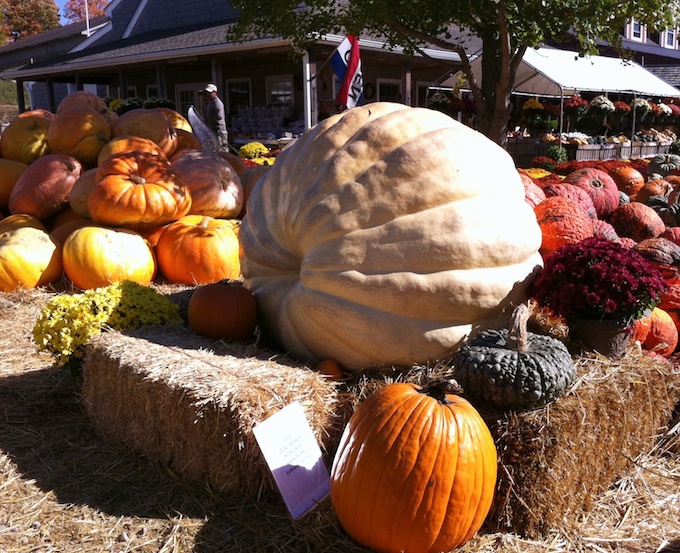 Every year, I buy pumpkins for the hens.

This year, I bought one for the goats. It was an experiment. You never know with goats. They are very fussy eaters. (Yes! Their reputation for eating anything is far from the truth.) 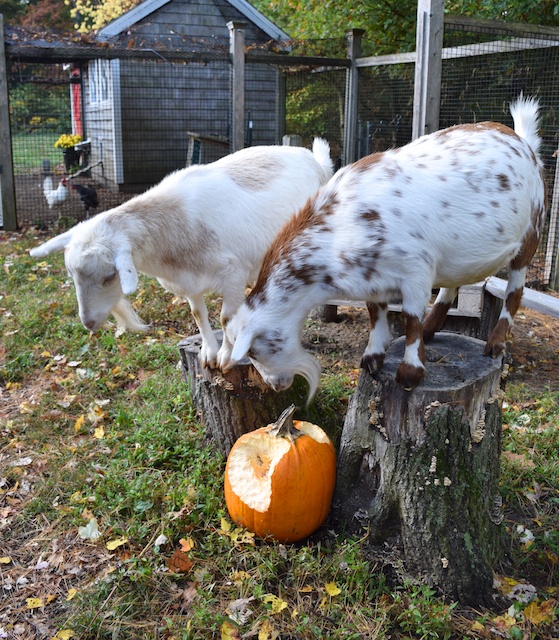 It turns out that the goat boys love the rind, but not the innards. Which is great, because it’s the gloppy stuff that the chickens like the most. I’ll be tossing this pumpkin in with the chickens tomorrow, and buying a new pumpkin for the goats. 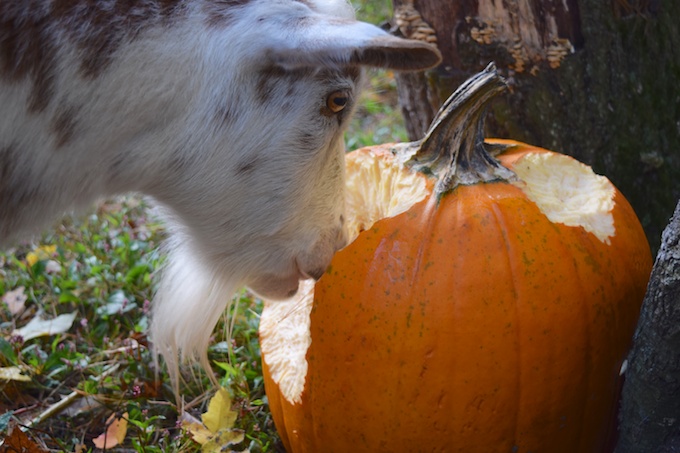 You can contribute to the fall pumpkin festival here at LIttle Pond Farm. Click here to buy the goats a pumpkin (via PayPal). Your support is much appreciated and helps to keep the cams up and running.

Treat the goats to a pumpkin!

This past week I have fielded questions from two readers about clear fluid coming out of their hens’ beaks.

Chickens do not vomit. Unlike humans, they don’t have the ability to upchuck the contents of upset stomachs. So, when you see fluids come out of your hen’s beak, something is very, very wrong. It might be that the chicken has a tumor, or an impaction, or a dead section of the intestinal tract that is blocking the passage of material, so that the only way out is up through the throat and mouth. If that’s the case then what is ejected is dark and vaguely food-like. Your hen might have sour crop, which is when the crop isn’t doing it’s job, and yeasty, sour-smelling liquids accumulate there. Your hen might have peritonitis, which is often caused by internal laying and a subsequent infection. Dark fluids fill up the body cavity, and when there’s nowhere else for them to go, they come out the beak. It’s awful. I’ve seen it here.

If the fluids coming out of the mouth are clear, then it is likely a case of ascites. This is a disease seen across the animal world. Humans can get it. Hypertension and liver damage cause fluid to accumulate in the body cavity. Chickens also get ascites. It is an economic liability in the commercial broiler world. The meat birds grow so fast that their organs can’t keep up. There’s a genetic component to this disease, specific to industrial agriculture, but ascites is also being seen in backyard chickens. There are some possible causes.

Chickens have lungs, but unlike ours, they are fixed in the thoracic cavity and are small and can’t expand. When the hen has oxygen demands that it can’t meet, ascites can occur. Poor ventilation and damp conditions with ammonia in the air can reduce the lung’s ability to function. Too many backyard coops are small, dank, and not well-ventilated. That can add to the ascites risk.

Liver damage can cause ascites. Cancer and tumors in older birds can impair liver function. A necropsy on my elderly hen Edwina showed a diseased liver, with the concurrent clear liquid in the body cavity. This was understandable to find in a nine-year old bird. But if your young (under two-years of age) hen shows signs of ascites, it might be because what you are feeding is harming the liver. Excessive scratch corn can cause fatty liver disease and possibly contribute to ascites.

There is some research that shows that stress, including rapid changes of temperature, can increase the ascites cases in a flock. This makes sense, since the disease is linked to blood pressure and overworked hearts.

So, what to do if your hen “vomits” clear liquid? Unfortunately, that will likely be the first sign that something is amiss, and by then the situation is severe. Do not isolate and bring inside. Your chicken needs fresh air and sunshine. If she is so ill that others are bullying her, separate to her own pen. Do rethink what you are feeding. If your ill hen is eating and drinking, leave her be. She might rebound. However, if after three days she is lethargic, and is not eating, she could starve to death. Please consider euthanizing her. This is the hard part of chicken keeping. You can’t always fix the problem. 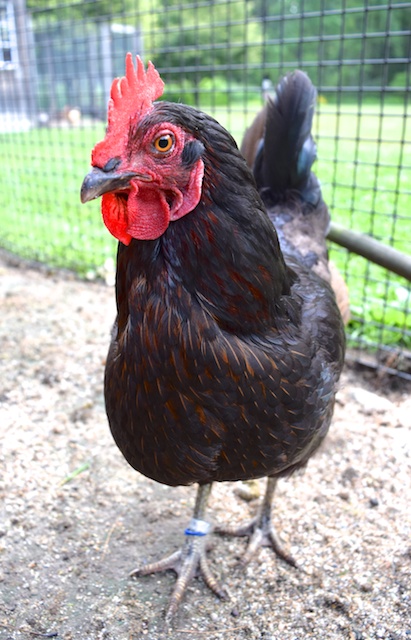