Way back in 2006 I blogged about how I hang a cabbage to entertain the chickens when they’re confined due to bad weather. Over the years, I’ve posted photos (some, like this one, have made the rounds of Pinterest.)

Since this winter is never-ending (0º F this morning, and a big snowstorm predicted for Sunday night) I’ve had to provide the chickens with more than cabbage to banish the winter boredom blahs.

In the Gem’s coop, I have a suet feeder hanging from a chain. I can fill it with anything from greens to a slice of stale bread. The variety is good for their minds and health. 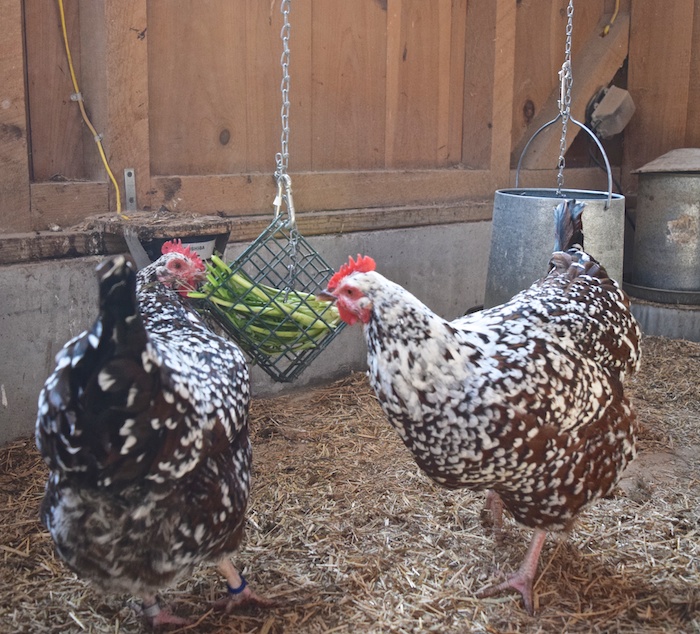 The chickens can’t gorge on the treats. They have to work for them. The feeder swings. The hens have to peck precisely through the mesh squares. It helps to keep them occupied while we all dream of springtime.

I’ve needed a new camera for quite awhile. The camera that I had was good enough. I’m not a technically skilled photographer, but I see stories, and I was able to capture them with the Coolpix. I was frustrated at missing some moments because the focus was too slow, and the shutter speed didn’t allow for action shots (you know how quick chickens move, so I missed a lot!) But, cameras are expensive and I put off purchasing a new one until it became a necessity. Finally, dirt got behind the lens and it couldn’t be cleaned off and so I went camera shopping.

I went to a day-long photography workshop to learn what my options are. Steve and I discussed the right camera for me. I now have a Nikon D5300. That’s why I was able to take that pic of the deer bolting. With this new Nikon, I’ll be able to take more enticing food photographs. If spring ever comes, it’ll do beautiful closeups of the garden blooming.

I was only able to purchase it because of the support of my readers. HenCam is my full-time job. I have to piece together a lot of parts to make it pay. Maintaining the site, with the live-streaming cams, costs about $300 a month. The cams themselves cost $500 each and need replacing every two years. It is challenging doing what I do and not have it be a drain on my family’s finances. The site does not pay for itself. The ads on HenCam bring in very little (a click pays about 10¢.) Associated products, like the calendar, bring in even less (I think that I made $30 this year on that project!) If you start your Amazon shopping by clicking through my website, I make a small cut. It all adds up. Chicken keeping workshops and storytimes help to pay the bills. Luckily, I love the public speaking, and thoroughly enjoy that aspect of my work. I’m also fortunate to be an author, but the financial truth is that being published is more satisfying than lucrative. I make about 5% on the cover price of each new book sold (less than $1 a book) and most books don’t sell more than 15,000 copies over their lifetime. Most of my writing now appears on this website. I love writing my daily blog. I find the topic of what goes on my animals endlessly fascinating. I enjoy the immediate connection and interaction with my readers that blogging provides. I also field numerous private emails daily. I’m happy to answer questions. I can’t think of anything I’d rather do than engage in this conversation with you. With traditional writing, a publisher comes between the author and her readers and pays the bills. With a website like HenCam, the readers come directly to the author. If you were my neighbor and asked for chicken advice, you’d invite me over for a cup of coffee, and so I thought I’d create the equivalent of that friendly cup here at HenCam.  Many of you have bought me a cup of coffee, banana chips for Phoebe, and carrots for Tonka. (There’s an easy link to PayPal on the sidebar.) Truly, I couldn’t put the time into my writing without your support.

The goats are especially appreciative of their peanuts. In fact, Pip says, Put down the new camera and give us a few. 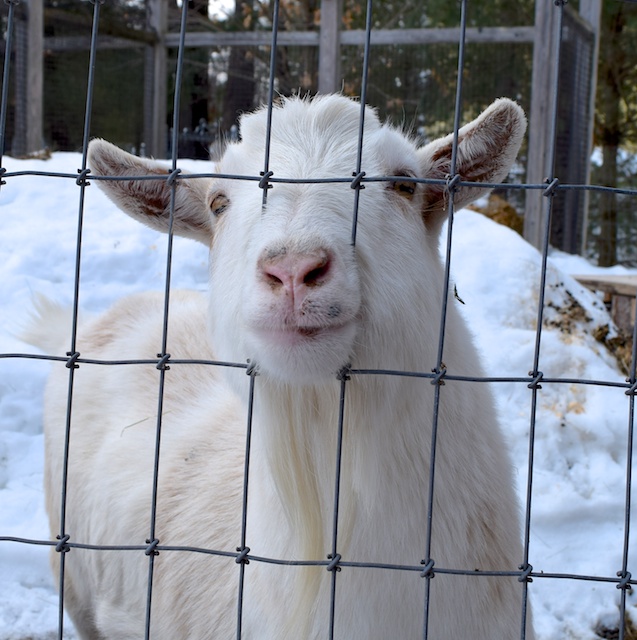 We all say thank you.

Not all of us are born with naturally beautiful features. 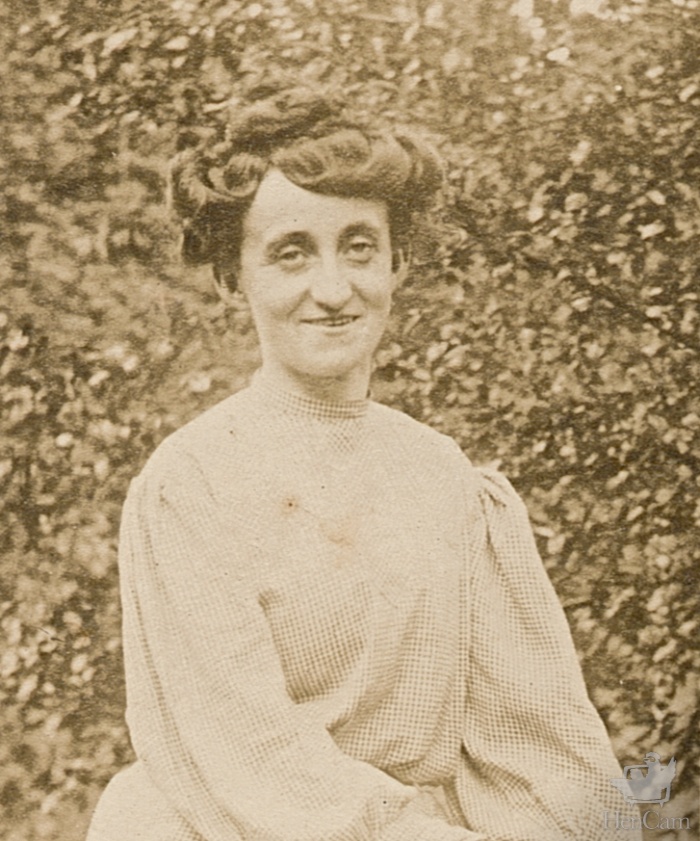 Not all animals are sleek and elegant. 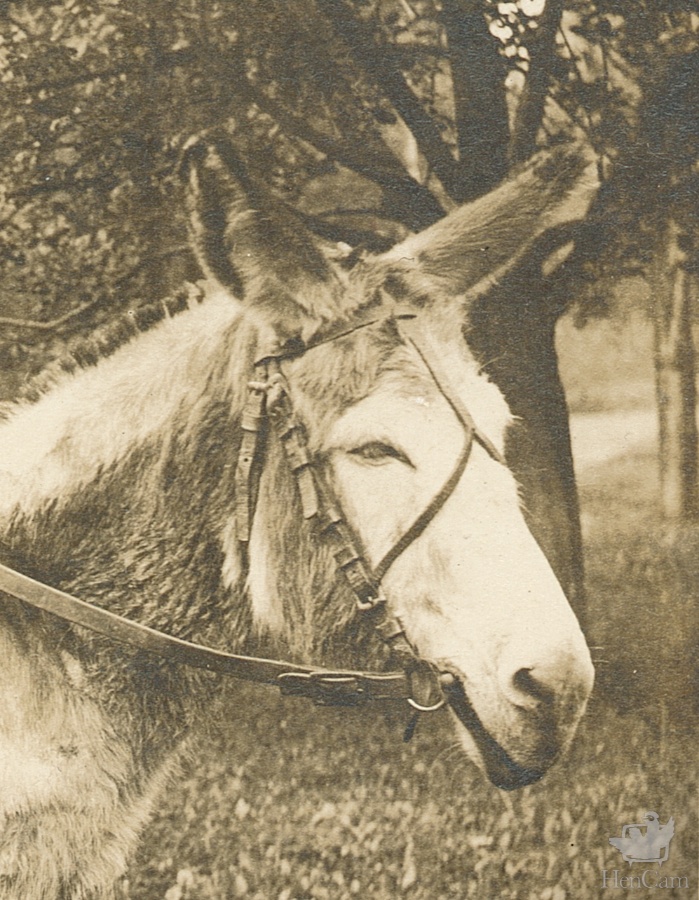 But beauty, the sort that lifts the heart and makes you happy, isn’t determined by features alone.

Kindness, gentleness, love. Combine those, and this is what you get. Beautiful, aren’t they? 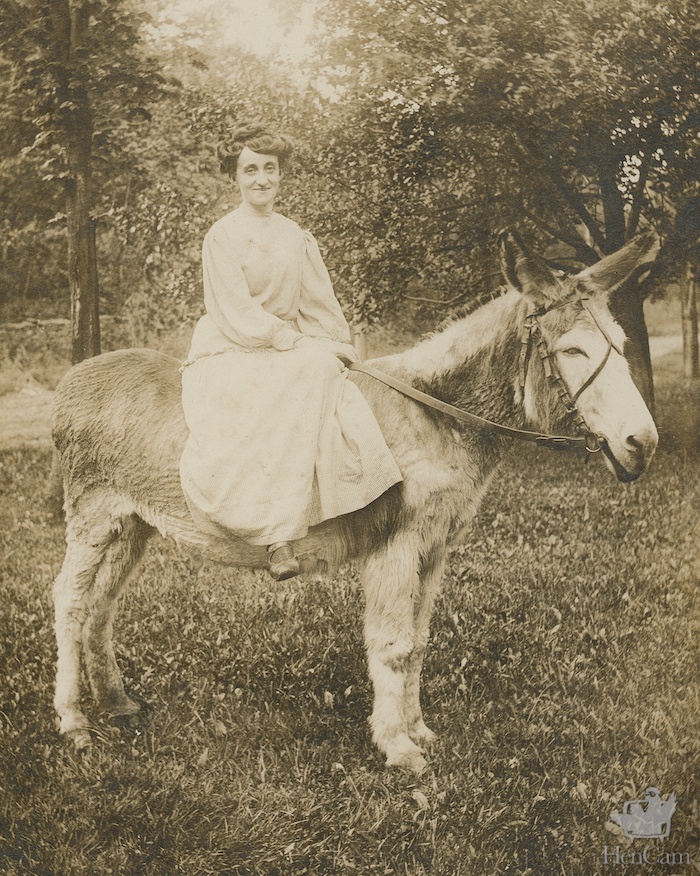 This is what I saw this afternoon in my neighbor’s front yard. White-tailed Deer. 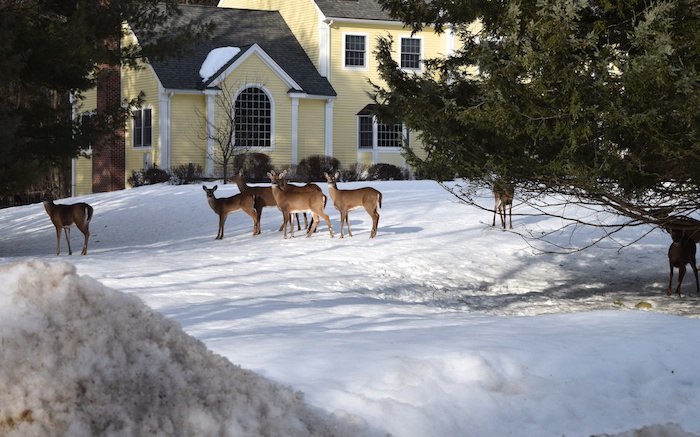 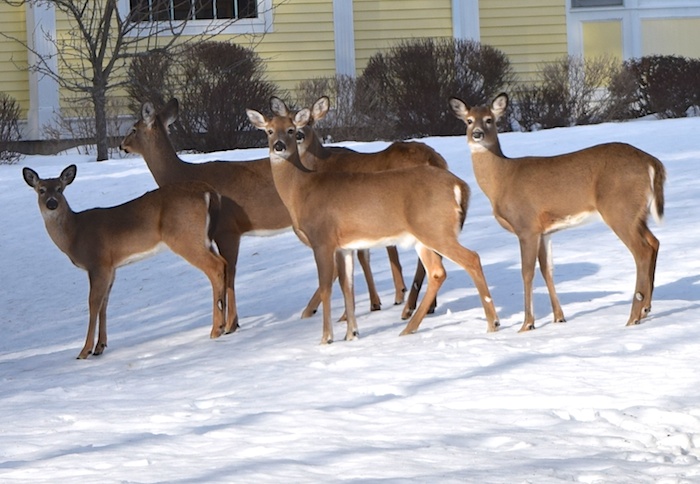 However, I’m not happy to see them. There’s a severe over-population problem, resulting in environmental disaster, not to mention what they do when they get into a vegetable garden. Additionally, deer are a host of Lyme Disease, which is causing a health crisis in my town.

Still, when they dash off, you can’t help but appreciate their leaps and bounds. (Look close, though, and you’ll see that they aren’t all grace – see one crash into another?) 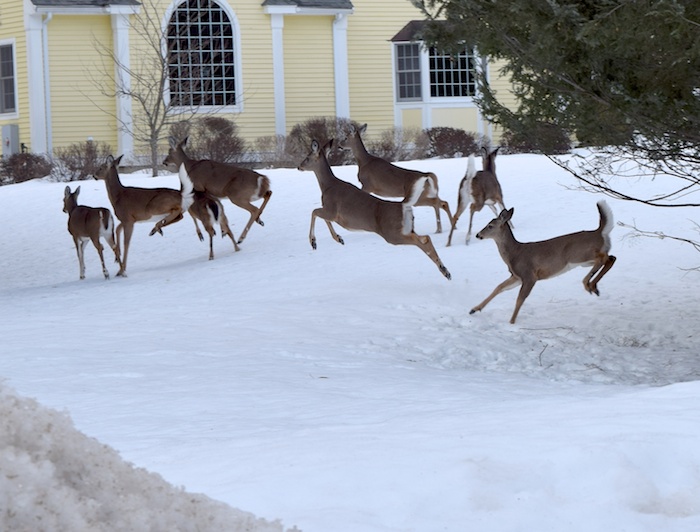 My neighbor doesn’t have a dog, but I have Lily. She keeps the deer off of our property. Good girl! 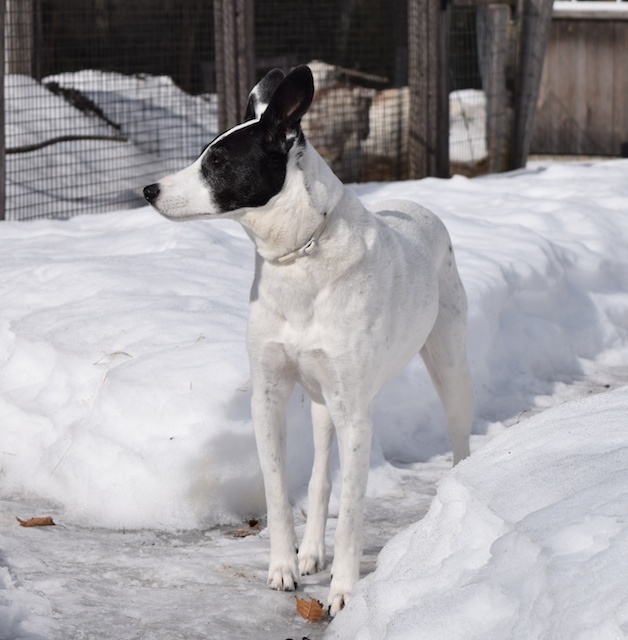 A few weeks ago I got an email asking this simple question: Do chickens smell?

Perhaps, incorrectly, I did not interpret the email as meaning, Does a flock of chickens create a nasty odor? Rather, I took it to mean Do chickens have a sense of smell?

Now that was an interesting question!  There are many researchers currently investigating avian senses, and I’m sure that more details will come with that work. But for now I have a really interesting answer.

Up until recently it was the widely held assumption amongst experts that birds have only a rudimentary sense of smell. But, a few gutsy, out-of-the-box-thinking (mostly) women scientists have shaken that world view. (Read a good overview of that story and research here.) Not only can birds smell, but they rely on it more than once believed. There’s a lot of variation within avian species and so there is a wide spectrum of how sensitive each species’ sense of smell is, and how much they rely on it.  It turns out that some birds that spend their lives soaring over the ocean find food by scent! That’s not the case with our domesticated chickens that have been selectively bred for traits other than sense of smell; chickens are not the animal kingdom’s best sniffers. Still, chickens can and do use smell to help make sense, and make decisions, about their world.

Chickens develop their sense of smell even before hatching. Chicks are able to smell from inside of their shells. In one experiment, eggs were rubbed with strawberry scent. When the chicks hatched, they preferred strawberry scented shavings and water. Adult chickens respond to scents, too. One researcher discovered that chickens respond with alertness when the feces of a prey animal (in this case, a tiger) was put into their pen. Droppings from non-prey animals did not affect the chickens. Another study showed that roosters respond to the scent from a female’s preening gland.

However, chickens do not use scent to make most of their decisions about what to eat or who to consort with. Sight and sound have far more influence. Partly this is due to the fact that taste and smell work in concert and a chicken’s sense of taste is not the most sensitive. A chicken has only a few dozen taste buds (compare that to a cow’s 25,000) and those buds are located well behind the front portion of the tongue which is cornfield (rough). By the time the food reaches the taste buds, the chicken is already committed to swallowing the morsel. They do not taste and spit out!

I have heard anecdotally about flocks that reject a change in feed. To our human noses, the change has to do with the sugar content – one bag smells sweetly of molasses and the new bag does not. Current research doesn’t support our human-centric view of what is going on. Chickens do not appear to respond to sugar. However, studies do show that chickens prefer corn over rye, so the chickens are objecting to something in the  formulation, it’s just not the sugar! A researcher has also looked into flavorings marketed as appetite enhancers for commercial flocks and found no correlation between food consumption and these products.

We’ve been told that our backyard chickens self-regulate for things such as calcium and grit, and that they will seek out foods with nutrient content that’s optimum for them. It turns out that that is only somewhat true. Much more research needs to be done, but it appears that our hens are good at regulating some nutrients by selective eating, but not all. Also, they quickly become indifferent to what was originally offensive to them.  What our chickens do care about is the temperature of their water! Research shows that they drink far less when the water is above their own body temperature. Cool water is a must. I’ve certainly noticed how much my flock appreciates fresh cool water, offered in the shade in the heat of the summer months. (On the flip side of this, if you think you’re indulging your hens by offering warm water and hot oatmeal in the winter think again.)

Perhaps this is more than you want to know! All you have to come away with is this – yes, chickens have a sense of smell and taste, and it does influence them somewhat, but, it’s still up to us to provide them with a balanced diet of healthy and nutritious feed. And, you don’t have to fuss over flavoring their supper. 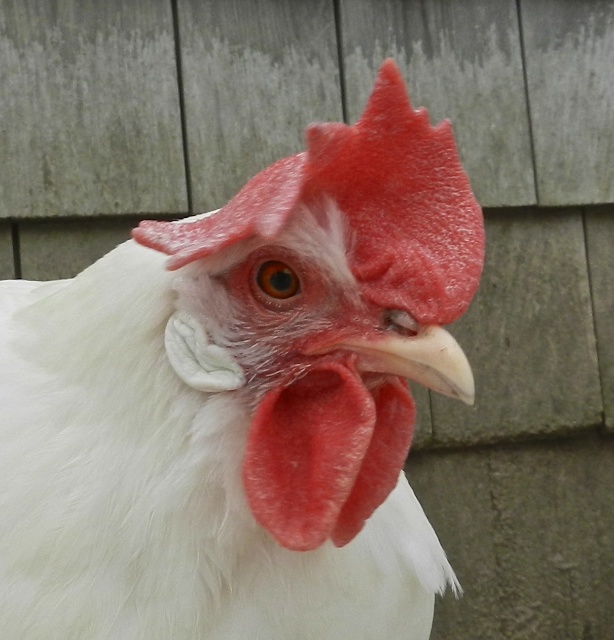