We had company this morning. 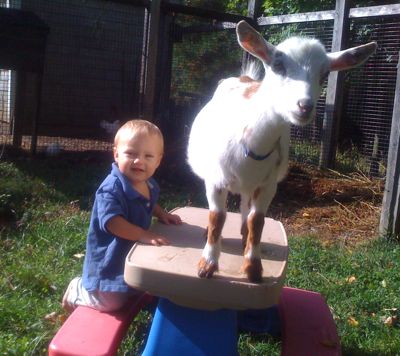 Mason and Caper were hoping for a picnic. 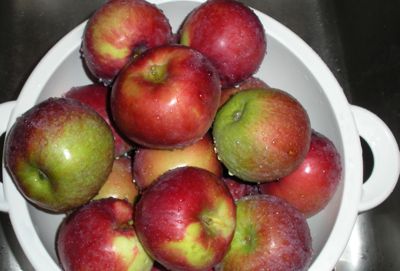 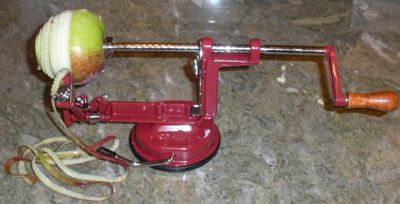 The trees are changing colors and leaves are fluttering to the ground. The goats are amazed at their good fortune – a favorite treat, wilted leaves, is appearing miraculously at their hooves. They trot back and forth, watching as the leaves come down and then snarfing them up.

Here is Caper doing a good job of keeping the lawn tidy. 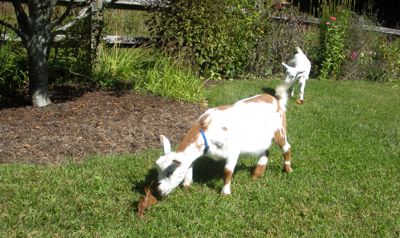 Pip and Caper are much quieter and cuter than a leaf blower. However, leaf blowers don’t do this: 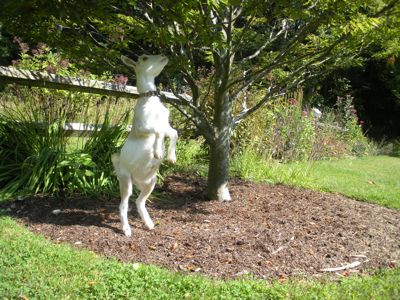 Pip likes his salad with green leaves mixed in. Oh well, I suppose it’s back to the lawn guys and their machines.

One of the fun things about promoting Tillie Lays an Egg is that I get to take my chickens places that poultry are not usually welcome. This past weekend, The Country Club in Brookline, Massachusetts had it’s first Family Fall Festival. The Country Club (yes, that’s it’s name. It’s exclusive enough to be THE country club) is a bastion of privilege. It is an oasis of manicured lawns and elegant, historic club house, and a master’s level golf course. There’s even a curling rink! Suffice it to say, chickens are not welcome on the greens. However, they invited Tillie and me to come to this event, and we were happy to show up. Tillie (in this case, Coco, the actress who plays Tillie), was, of course, already in her country club finery of a white dress and fancy red comb. I put on some lipstick. Tillie graciously let dozens of children pet her. A few older members reminisced about chickens that they had when growing up. Here is a photo of our tent on the club house lawn. It was a lovely afternoon. 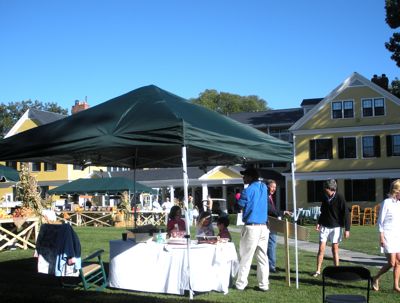 Next, we traveled to the Barnes & Noble in Framingham. Most B&Ns have cafes, and so, for health regulation reasons, I’m not allowed to bring a chicken. But this one’s Starbucks is separate, and so Tillie was invited. There’s nothing like a bringing a hen to a place where animals are totally unexpected. The children sat cross-legged, transfixed by the story and the live chicken. At least a half-dozen B&N employees joined the audience. Who can resist a pretty hen?

Here are Larissa DeAngelis and Muriel Macleod of the children’s department. 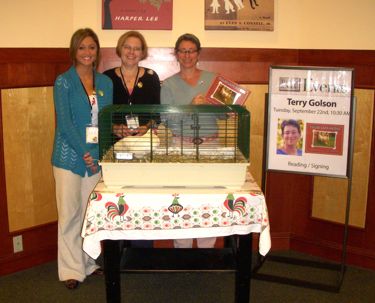 In October, Tillie and I drive 100 miles to meet the children in Springfield, Vermont. We can’t wait.

I’m in a bit of a mood today. It might have something to do with my agent letting me know about a manuscript that we thought would sell readily, but has been “declined.”  I need a new work-in-progress. I miss the emotional entanglement with my characters and the hashing and re-hashing of words. Somehow, all of my projects are now waiting for approval. I don’t have anything in the just-started phase. I do have an idea that involves goats. So, I’ve been spending time with the boys. Nice excuse, isn’t it?

Luckily, the vegetable garden suits my mood. My tomatoes succumbed to the blight and cold nights. I ripped them out. The bean plants, although still leafy, are producing twisted, discolored beans. The nights are too cold and the plants are too old. I tore the vines off of their support trellises and tossed them in the compost. Very satisfying. 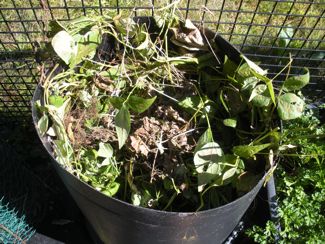 This is not the time of year for planting and nurturing. It’s all about dead-heading and composting, gleaning what’s left, and letting the soil rest for awhile. It’s the perfect metaphor for my life. Okay, that’s a cliche. Not my best writing. But it sure makes for mood-lifting gardening. 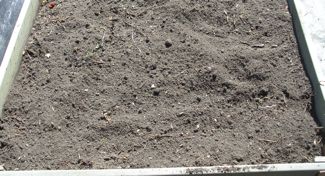