Yes, in Tillie Lays an Egg, the hens share and take turns. But, sorry, that’s a work of fiction. This is what happens in real life: 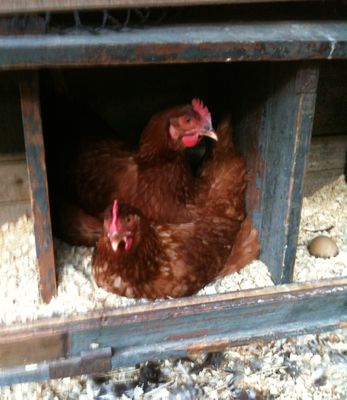 Philomena and Agnes both want to lay their eggs. There are three nesting boxes. The other girls are outside. Plenty of room, right? Wrong. They both insist on the middle box. Today. Yesterday they laid eggs in the right-hand box. What one has, the other wants. It’d be funny, except sometimes they get so pushy that they trample their eggs.

The egg that you see to the right is a decoy egg. It’s wooden. It’s used to convince new layers to lay in boxes and not on the floor. It works. Well, for everyone except for the aptly named Eggers, who lays whenever she is ready, wherever she is. Today it was on the floor of the coop. The other day it was under the bunny hutch. Last week, it was in the mud, in the rain. I stepped on it before I realized it was there. Once she lays her egg, she doesn’t look back, which is a very Tillie-like thing to do. So, there is some truth to my book!

Last week we extended the goat paddock into the back meadow. Remember this lush view? 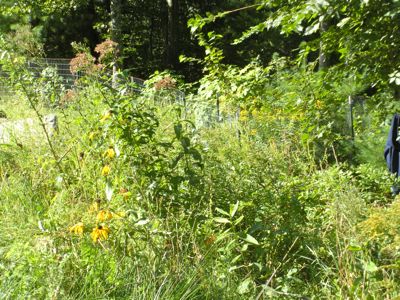 This is what it looks like today, one week later. 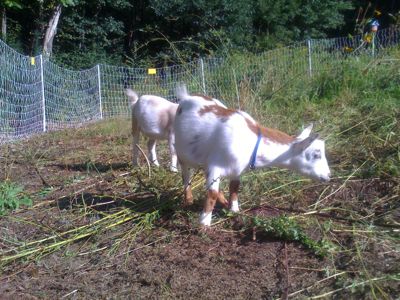 Yes, it looks decimated, but the goats were quite fussy. They didn’t just mow it down. The golden rod went first, eaten with gusto. Cleansing nibbles were taken on the ferns. Then the leaves on the thorny bush were savored, but not all in one sitting. It’s best to tear off the leaves, wander off and then come back. The tops of the clover were eaten, and the leaves ignored. Now, they are doing gleaning forages through the pasture, looking for morsels they’ve missed. They are not much interested in the black-eyed susan, so I might have flowers bloom again next year.

I’ve ordered more fence so that they can browse further back. I’d hoped that the meadow would give them forage until the first snowfall, but at this rate, it will all be gone in a month. Fortuitously, there’s an overgrown meadow across the street. It’s conservation land and mowed only once a year. It could use a good tidying along the edges by the stone walls. I know just the boys for the job.

Lots of people claim that they get backyard chickens to “teach their children about responsibility.” It’s a good way to do it. No one is harmed if you don’t vacuum your room, but if you don’t water the poultry, they’ll die.

I got my first hen when my oldest son was two. He’s now sixteen. However, I didn’t get chickens for him, or for his brother. I got them for me. I like doing the chores. I spent this morning cleaning out the coops and shoveling goat manure. I couldn’t have been happier. I like doing the daily feeding and scrubbing the waterers. My husband does too. Honestly, I haven’t wanted to share that with the kids. Terrible, isn’t it?

Still, the boys, somehow, have learned about putting other living creatures ahead of themselves. They’ve learned about how calming sitting with a hen can be. They know the sweet smell of goat breath. They do have chores, just not barn chores. Among other tasks, they vacuum (up a lot of dog hair!)

Once in awhile, they collect the eggs. You’d think, that after 14 years of bringing eggs into the kitchen, that my eldest would know the routine. But, as I said, my son is 16. There are teenage brain-lapses. A friend of his was over, so they went out to the coops to see the chickens, pet the rabbit, and play with the goats. The backyard animals are always the first stop for visitors. Even teenagers. More fun that a Wii. Anyway, he came in with three eggs and asked me where to put them. How he couldn’t know, after 14 years of bringing eggs into the kitchen, I don’t know. I was busy and didn’t look up. I said, a bit exasperated, “with the other eggs!”

I later asked him where the eggs were. He said, “in the fridge with the other ones, like you told me to.” After a bit of searching, I realized he’d put the freshly laid eggs in the bowl with the hard-cooked ones. Now how was I going to tell which was which? My morning routine is to eat a hard-cooked egg, first thing. I’m usually still half-asleep at 6:30. The jolt of protein helps. I cook up a big batch once a week. I didn’t want to wake up to a raw egg. From the outside, they look the same. How to tell which was which? Take a flashlight and shine it on the egg. A Raw egg looks translucent. A cooked egg is opaque.

The temperature is in the low 60’s, there’s sun and fast-moving clouds, a crisp breeze, no humidity and a clean smell to the air. It’s brisk out. Brisk is one of my favorite words. It sounds like it means, and it describes that fleeting, perfect time between September and October.

Brisk also describes how the animals are behaving. Pip and Caper, who, in my limited experience, are the most mellow goats on earth, celebrated the season this morning by boinging around the paddock and jumping from rock to rock. Candy greeted the day by loping around in circles, and then settled back into her zen-bunny routine. The hens are more active and no longer hunker down in the shade at mid-day. However, Scooter seems unchanged. He still looks for the warmest patch of sunny ground to sun-bathe on. 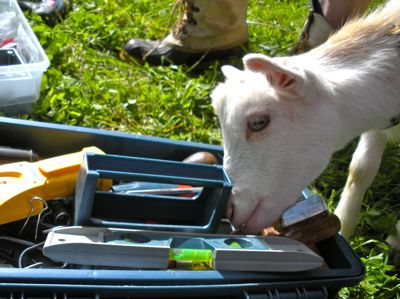 After rearranging the tools, he gives himself a good scratch. 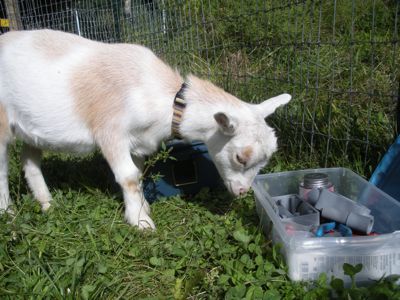 Well, I’ve been in front of this computer for too long! I think I’ll go harvest the chard. No telling when that first frost is going to hit. 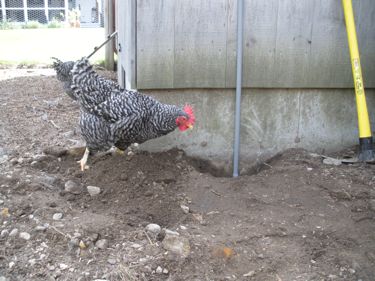 The other girls came over to help clear the dirt of insects. While Steve went into the barn to do another task, the girls were especially helpful by vigorously scratching in the dirt pile, which filled the hole back up.

Steve then worked on the barn wiring. The goats worked hard, too, keeping him company. Goats do not understand the words, “you’re in the way!” 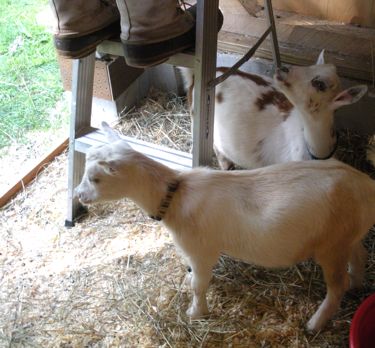 Finally, the new fence is ready! The goats are hard at work clearing the weeds. 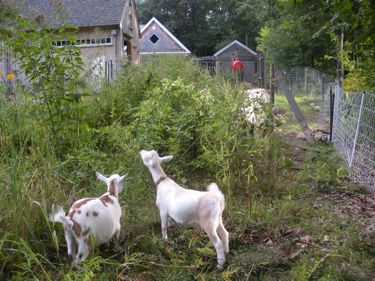