This is what is called a RPPC – a real photo post card. Back at the beginning of the 20th century people often had their snapshots made into postcards. This image is one such RPPC. I don’t know the story behind this as there’s no writing on the back, but I think that this photograph is the perfect expression of a winter’s day. With chickens.

Just look at the tassel on the boy’s hat! The wagon is homemade out of a soap box. The rooster and his two hens seem to be enjoying the ride. I wonder where they’re going. Don’t you? 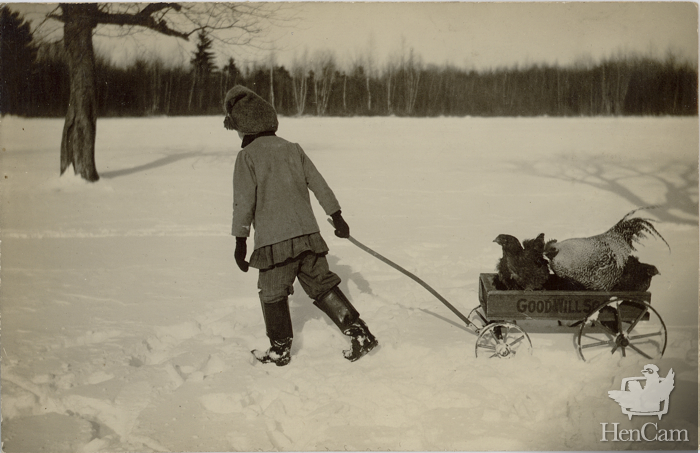 I’ve turned this photograph into a holiday greeting card. It is available at Zazzle.

This photo dates from between 1907 and 1914. I know this because of the style of the printing on the back of the card. I am assuming that this child is a boy because of his dress. Girls at that time did not wear trousers. This child has a boy’s plaid pants and matching suit coat on underneath a winter jacket that has been outgrown. He’s also wearing boots that were likely borrowed from an older male relative. If this were the 1950s, then the clothing would be appropriate for a girl, but, not so in 1910.