Here in America, we have a holiday called July Fourth. Of course, there’s a July 4 everywhere, but for some reason (I’m sure lexicographers have studied this) we rarely call it Independence Day. It’s simply The Fourth and it’s meant to be a celebration of our start as a nation. We put up flags. We have parades. Politicians pontificate. We eat BBQ.

I rather like the flags. Ours is a cheerful and bold red, white and blue. The number of stars changed as the country expanded and added states. But it still looks much like the ones on this Wisconsin poultry farm’s porch, around 1915. 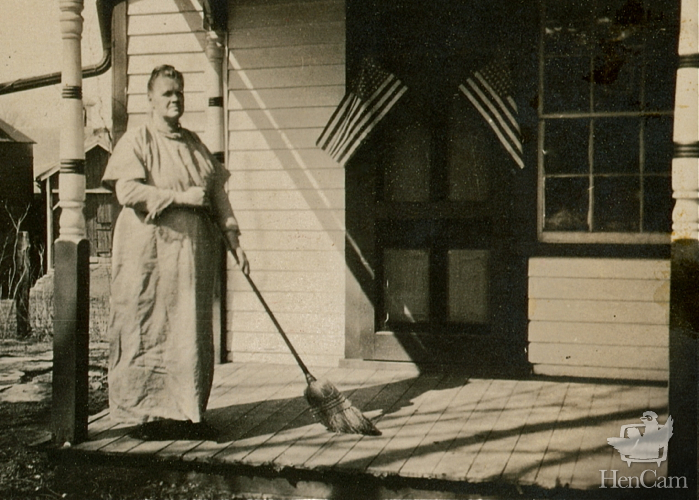 "Mother" on a Wisconsin poultry farm

I live in a little town that loves The Fourth. We have an Old Home Day celebration on a Saturday before or after. Like all good Fourth events, there’s pomp and circumstance. The Honored Citizen, and Conservationist of the Year are announced. There’s a corn shucking contest (the corn is cooked later at the Fireman’s BBQ.) There’s an art show and pet show and a dunking booth.

What makes my little town the best town for celebrating The Fourth is that while we have all of these classic events, what we don’t allow (not anywhere in town that day) are politicians. None kissing babies or asking for signatures or speechifying.

We do have a parade. A parade without politicians. We have a parade with homegrown floats, a few vintage cars, a town hearse (this year pulled by two Belgian draft horses!) AND we have a librarian drill team. The Fourth doesn’t get much better than this.