I call the flock of hens that you see on the BarnCam the Gems, because they are named after rocks (Etheldred honors a pioneering female geologist.) They arrived in a cardboard box, through the mail, from Meyer Hatchery in April of 2011. 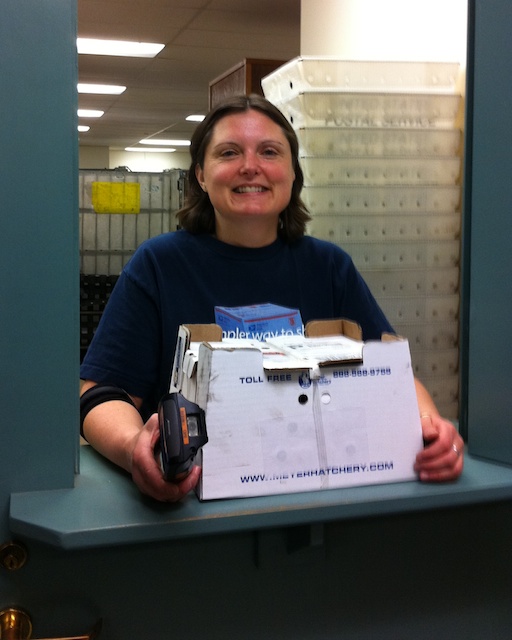 The fuzzy chick phase lasts but a short couple of weeks. 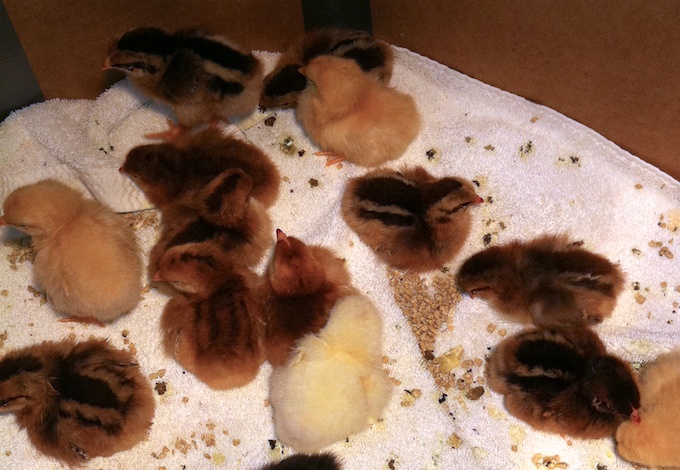 By late summer of 2011, the Gems were laying. They’ve now gone through two molts.

Pearl is in all of her fluffy cochin glory. 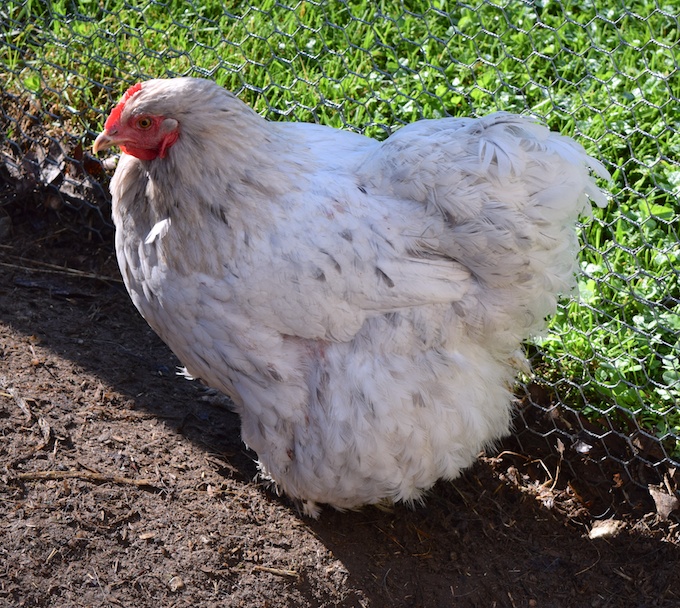 Despite losing her tail to feather picking, and having a rough-looking rump, Jasper continues to be friendly, alert and active. (All of you with feather picking in your flock, take heart! Sometimes the hen just doesn’t care.) 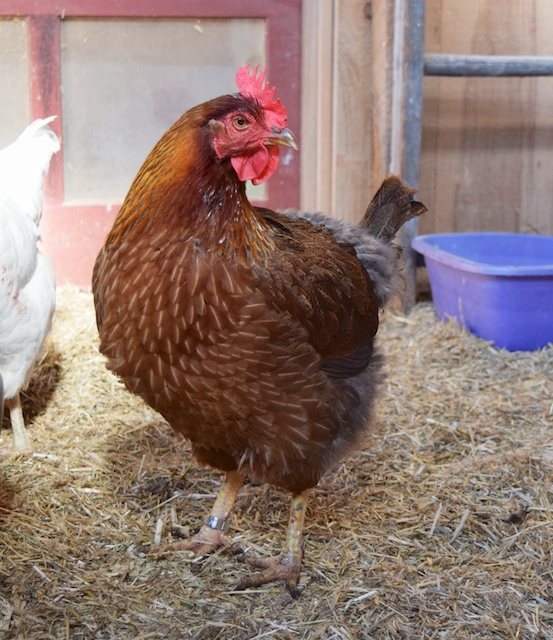 Amber continues to be the perfect Buff Orpington. She has all of their good traits, but she never goes broody. 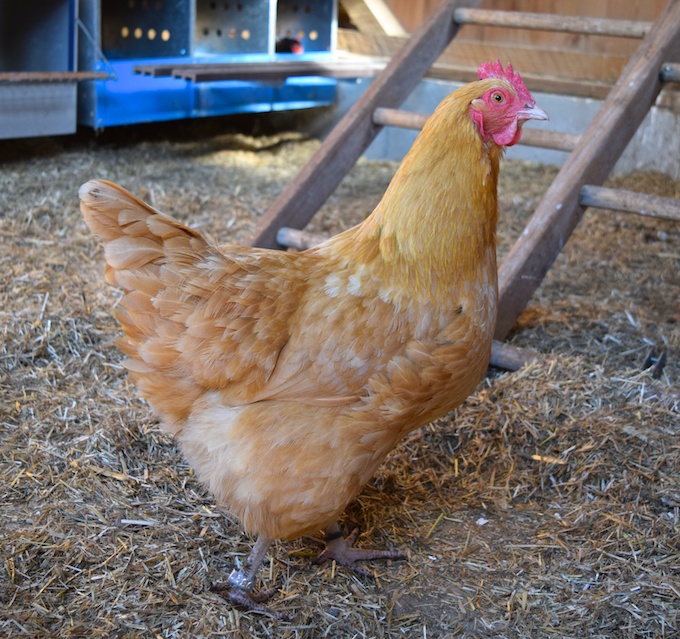 The Gems continue to lay eggs. 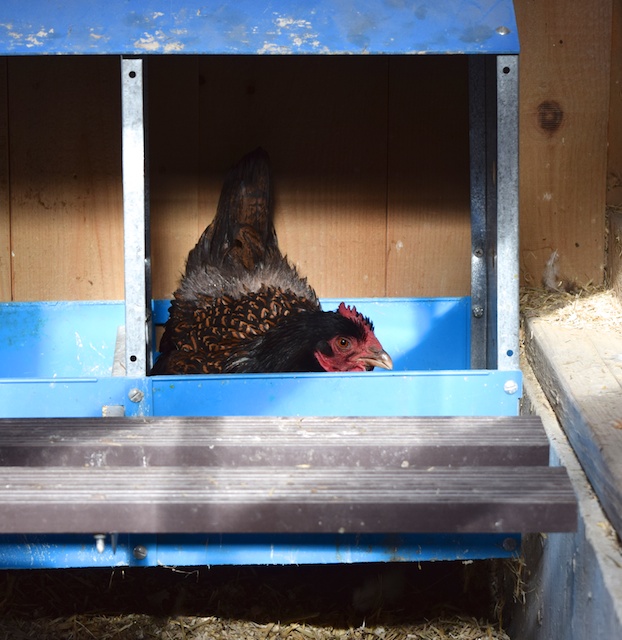 Despite their outward glossy and healthy appearance, the Gems are old.

It’s hard to accept that the normal-looking hens in your flock are old, but by the age of three they are. Don’t believe all of the backyard chicken boosterism that claims that you’ll have hens living and laying for a decade. A rare bird might, but most won’t. At three, laying hens are past their prime. It’s true that many of your hens will keep laying, albeit at a reduced rate. But, it’s not just that the hen is producing fewer eggs, it’s also that they have difficulty constructing sturdy shells and laying without issues. It takes a lot for a chicken to metabolize nutrients from feed and turn it into eggs. By their third laying season, their nutritional tracts aren’t up to the job. Sometimes, internal organs are tumorous. Sometimes, they’ve just not as efficient at digestion.

Early this springtime, there were days when I collected ten eggs from this group of eleven birds. But, lately, that number has halved. It’s not just the rate of laying that has slowed. Egg laying has become problematic for some of the girls. Egg shells are thinner. Some are so fragile that they break, and then the hens eat them. Once in awhile an egg is laid that is as soft as a water balloon. These sorts of glitches lead to bigger problems. The chickens strain to lay rubbery eggs. An egg might break inside of the hen. Eggs might back up in the tract and they become impacted, or the hen will become an internal layer. I’ve seen all of these problems, and I’ve confirmed them by doing necropsies after death.

If I was a “real” farmer, this flock would be gone. The shells would be too thin to pack in cartons without cracking. The margin for making a profit would disappear. But, I’m not a farmer. I have hens in my backyard that I’ve gotten to know. I can afford to keep them around. Because I know what’s going on with the Gems, I can do a few things to make egg laying easier for them.

An optimal diet for the older hen is essential. They need chicken grit – yes, you have to spend $10 on a bag of rocks. Without grit of the right size and type, they can’t grind food up in their gizzards. They need oyster shell, offered free choice. (I use a rabbit food dispenser.) Most importantly, they can no longer eat anything and turn around and make eggs. They can no longer be given all of your kitchen scraps. No more bread and pasta. No empty calories. Forgo the scratch corn, too. They should fill up on pellets before being given healthy treats such as greens and watermelon. However, finding goodies by free-ranging on your lawn and garden is still a good thing.

I’m now treating my healthy-looking Gems as the old girls that they are. Careful management will allow them to lay eggs as sturdy as they can make them. Some hens will sail through the next few years. I hope that most of them do. But, I expect that I’ll see difficulties in the months to come. This is as much a part of chicken keeping as is being smitten by those day-old chicks. This is not depressing. Being realistic about your animals’ lives allows you to enjoy them for who and what they are and to care for them appropriately. Meanwhile, it’s a beautiful day and I need to get into the garden. The hens are ready to help with the bug control and turf turning, and I look forward to their company.