None of the hens in the HenCam coop are in their prime. The youngest, the Golden Comets, Agnes and Philomena, are two years of age. The oldest, the Barred Rocks, are seven.

Here is Eleanor in her grand old age. She hasn’t laid an egg in ages. 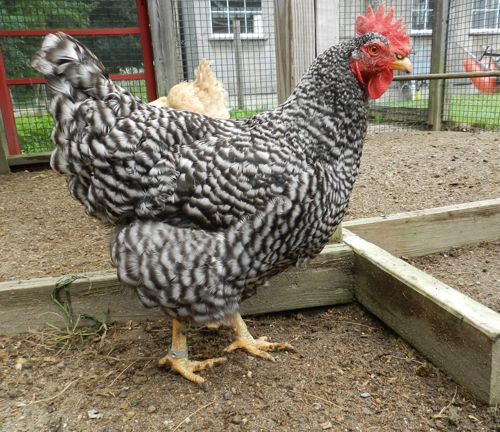 But, the Comets have. They are designed for egg production. Their first year, between the age of 20 weeks and 20 months, they cranked out about five, or even six, eggs a week. They did this every week, right through the winter. Things slowed down the second year, but they kept laying. They’re heading into their third laying season and I’m still getting about four eggs a week from each hen. Tina Turner and Siouxsie are the same age as the Comets, and although they’re ditzy Polish hens, kept for decorative reasons, these hens lay every other day.

Each egg requires calcium for shell formation. My hens are fed quality commercial laying hen pellets that contain this essential mineral. They also have oyster shell free-choice. But, the calcium doesn’t go directly from the digestive tract to the shell. First it needs to be deposited in the bones, and then reabsorbed into the body in order to be useful. As the hens age, their bodies can’t keep up with the loss of calcium through shell manufacture. Things go wrong.

Last month, right around the time my hens were fighting off a respiratory disease, the Comets started laying soft-shelled eggs that broke before they hit the shavings in the nesting boxes. Then, Tina hunched over and laid eggs that were streaked with blood. Maizie became lethargic and her abdomen looked red and swollen. Antibiotics can cause problems, but there was something else going on here.

I took a hard look at my farm management. One of the things that I love about keeping chickens is that they eat up all the stuff I might otherwise throw out – stale bread, leftover pasta, a frozen pizza that, when cooked, was inedible. I was giving my hens the equivalent of junk food. In their prime, these girls could have eaten every bit and remained healthy (just like teenagers – I have two sons who seem to thrive on a diet of ice cream. Believe me, they’ve tried it.) But, these older hens needed more calcium, and more of the other vitamins and minerals in their laying hen pellets – which they weren’t eating because I’d given them a banquet of empty calories. There’s no way a hen is going to eat that boring oyster shell grit when there’s spaghetti in front of her. Even without the pasta, the girls aren’t fond of the oyster shell. Chickens don’t always “eat what they need.” None of us do.

So, as much as I’ve hated to do it, for the last two weeks I’ve been throwing my leftovers into the trash (I don’t have another predator and vermin-proof compost area to put it in.)

The girls say that they are starving. They tell me that every time I go into their run.

They’re not. They’re eating a balanced ration of laying hen pellets. They’re getting out onto the grass and scratching around in the dirt several times a week. They get a small handful of scratch corn in the morning for a treat. (Small! A few pecks each. Corn makes hens fat, and fat causes laying issues.) 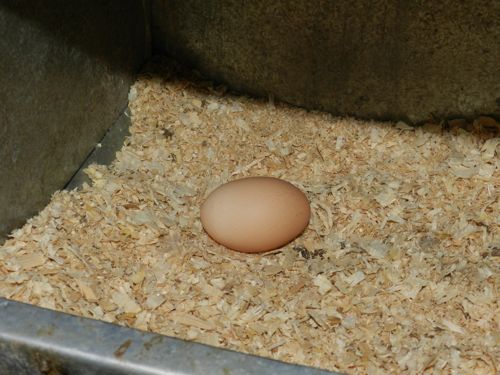 The eggs aren’t quite perfect yet. Look closely and you’ll see wrinkles. 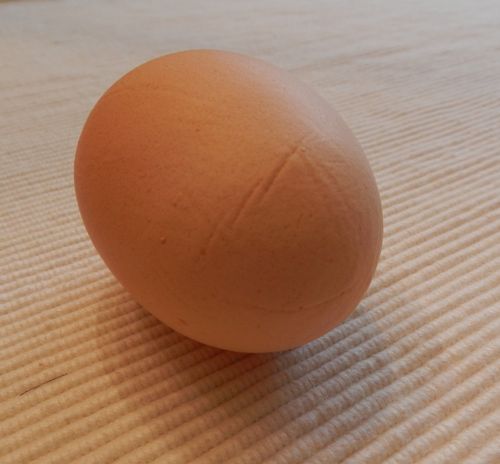 But, the shells are thick enough to need a nice whack to crack.

When faced with thin-shelled eggs, the common advice is to add calcium to the diet. That might work -for a young flock. But, if you’ve got older girls, or if you’ve been cleaning out your kitchen shelves, don’t use your hens as garbage cans. A correct diet really is a miracle cure. My hens are relieved that I’ve finally figured this out. It must be mighty uncomfortable to try to push out breaking, rubbery eggs. They’re now walking upright and with gleams in their eyes. In a few more weeks, I’ll add some of the healthier kitchen scraps back into their diet and I’ll figure out a new composting system. But, for now, I don’t mind taking out the trash, and I sure do like seeing my hens thrive and having eggs to put in my basket.