The footing has been so treacherous that it has been too dangerous to ride. Tonka is barefoot, and his feet slip on ice like unwaxed cross country skis. The snow is wet, it balls up in his hooves, and so at times it’s like he’s walking on rockers. But that doesn’t mean that training him has come to a halt. We’re working on all sorts of fun and useful behaviors, like “come” and “stand” and “head down” and “let’s go” (which means walk next to my shoulder, off-lead.) I reward him with carrots, but once in awhile I like to give him a high value treat. Tonka certainly likes commercial horse cookies, but they’re expensive, and I’m not thrilled with their long list of ingredients. I decided to make my own. I developed a recipe to meet my criteria of simple, healthy ingredients, a large batch with shelf-life, and very tasty.

I warn you that these smell so good when baking that your family will be disappointed that they are for the horses!

1. Preheat the oven to 350º F. Line two cookie sheets with parchment paper or nonstick liners.
2. Shred the carrots and apples. Please use flavorful apples, like Macouns or Macintoshes. Do not use drab delicious. 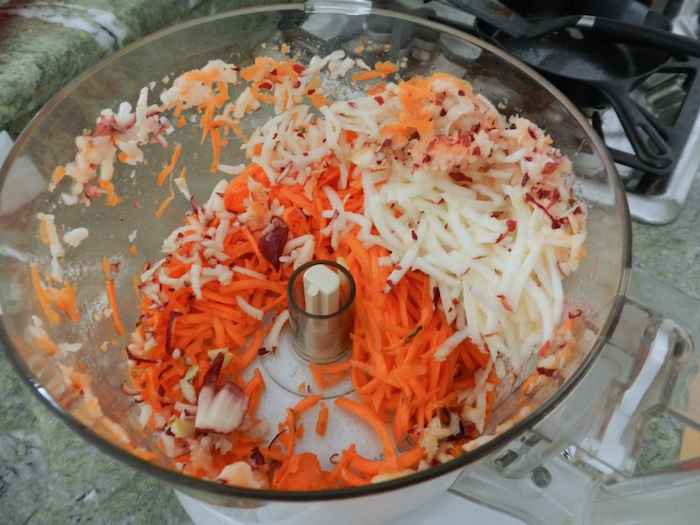 3. Put the shredded apples and carrots into a bowl, preferably of a stand mixer. (You could do this by hand, but the mixer will create a better texture and it is much easier. Most handheld mixers aren’t powerful enough for this dough.) Add the remaining ingredients. Cooking tip: measure the oil in the measuring cup and swirl around before pouring out. Next, measure the molasses in the same cup. The molasses will then slip right out into the mixing bowl.
4. Using the paddle attachment, beat the mixture until all is shiny. 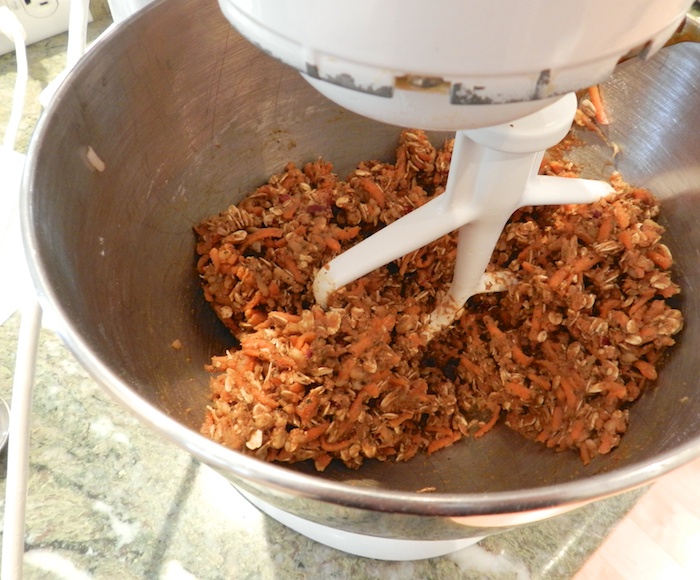 5. Scoop out small balls, they’ll be uniform if you use a scoop (you can make them half the size shown here by using a melon baller.) 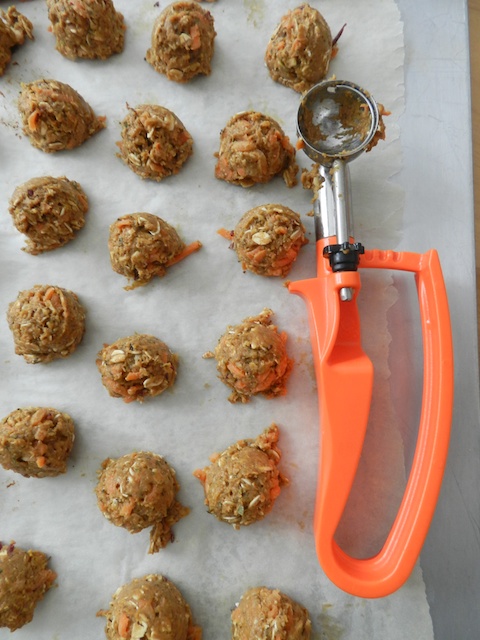 6. Bake for 1 hour, or until dry all the way through. If the tops turn dark brown before the centers are done, cover lightly with a sheet of tinfoil. Cool on a wire rack.

After fussing with this recipe, I took the treats to the barn to see what the horses thought.

Mica, Dune and Cisco loved them, but they’ll eat anything. 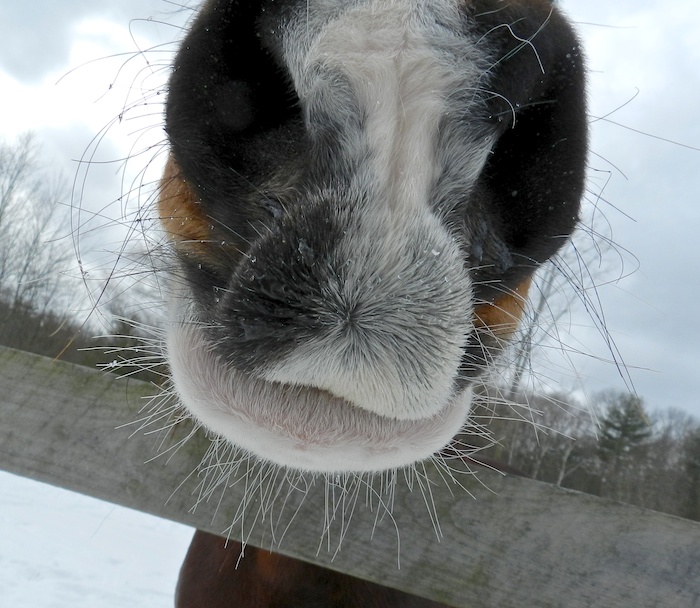 Tango, though, is a fussy thoroughbred. He spit out the first one offered. But then he thought about it and decided that he really, really liked them. 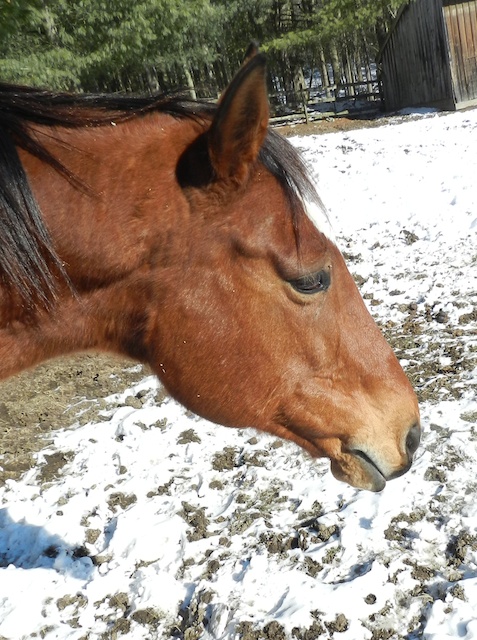 Tonka said that the cookies were a nice change from carrots. Here he is coming when called. 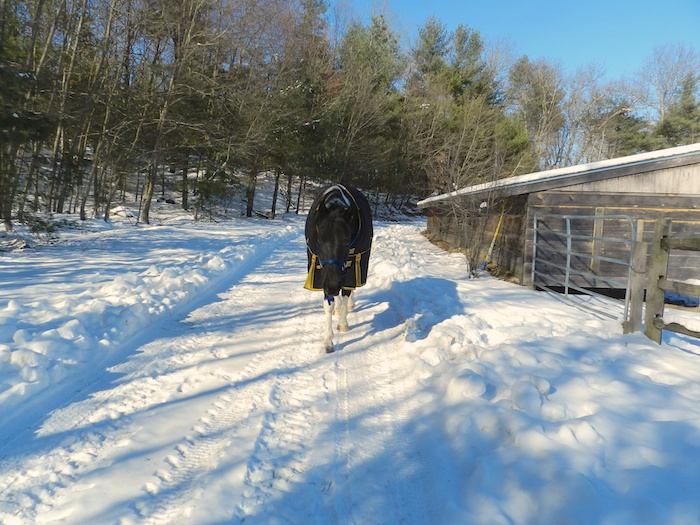 I’ll be writing more about training with treats in future posts. But for now, it’s important to say that I never give food “just because.” Horses are large and potentially dangerous animals. They can get pushy. A swing of a frustrated head, a shove, a bite, can do much damage. With this in mind, I only hand over a treat in response to a desired behavior. Also, how a horse takes a treat is as important as what he does to get it. A horse is capable of taking a treat with the gentlest of lips. Because of my parameters and attention to my horse’s body language, Tonka remains polite and calm, even during training and eating. 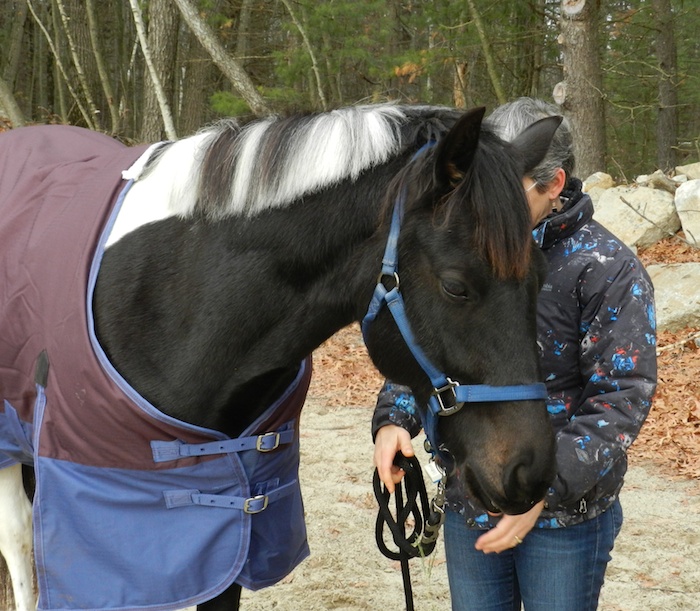 The goats also like treats. You might be surprised to hear that they are fussier than Tango! Pip turns his nose up in disdain at wilted parsley, and Caper has refused animal crackers (that his brother would have gorged on if I’d let him.) The ultimate test of this recipe was whether or not both of the goats liked them.

Like my horse, the goats are asked to behave before being fed. Sometimes I have them stand on their stumps, sometimes they are asked to back up. When I came into the barn with these new cookies, they could smell them. Their little tails wagged. They enthusiastically backed up, and then they smacked, crunched and swallowed. Success! 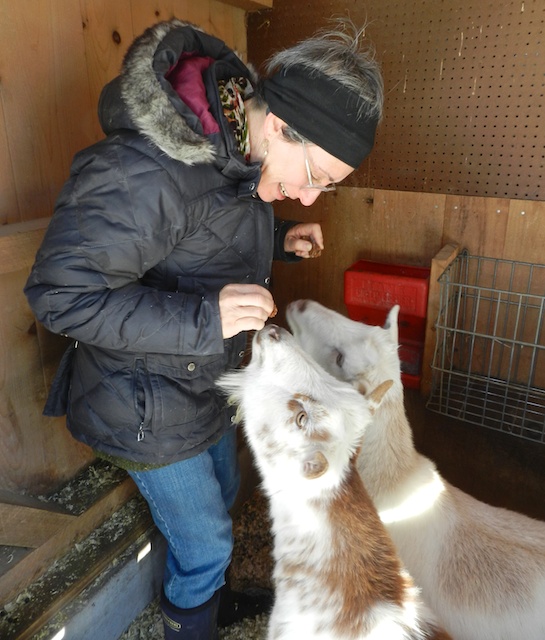