I’ve been concerned that one of the Ladies is eating her eggs. Once in awhile a pullet’s first eggs are thin-shelled or just a membrane. They’re easy to break, and no hen can resist eating runny yolks. Sometimes, a young hen doesn’t know how to settle into a nesting box, and breaks the eggs that are there. She quickly learns to stomp on purpose and eat the eggs. Sometimes a pullet lays an egg while out in the run, while on the run. The egg falls onto the hard ground and cracks. The other hens learn to look for eggs dropping out of the back end of another and peck as the egg is coming out. Sometimes you’ll find a bit of shell leftover, sometimes you’ll see egg yolk smeared on feathers or the beak, but more often than not the entire egg will be gone.

Nancy Drew has been laying for a couple of weeks. Daily I’ve watched her go into a nesting box, but there there’s not always an egg there when I go out later with my basket. I suspected egg eating, but I wasn’t sure, so, last weekend I sat down on a stool in the coop and watched. I sat there for an hour. I’ve found that my assumptions about animals are often proved wrong with steady and patient observation.

Owly was the first to sit in a box, and Nancy soon followed. 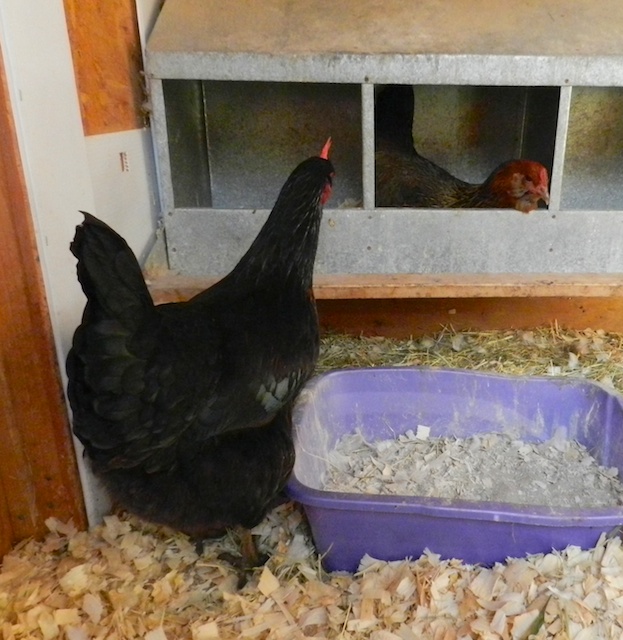 Nancy got in and out a few times, but then settled in. She showed the classic laying behavior of picking up bedding and placing it on her back. You see this with broody hens, too. Most of the shavings slid off, but a couple stayed put. This took awhile. Owly laid her egg and left. Betsy came over to claim it. I tossed Betsy outside and put the egg in a basket. Meanwhile, Nancy sat. 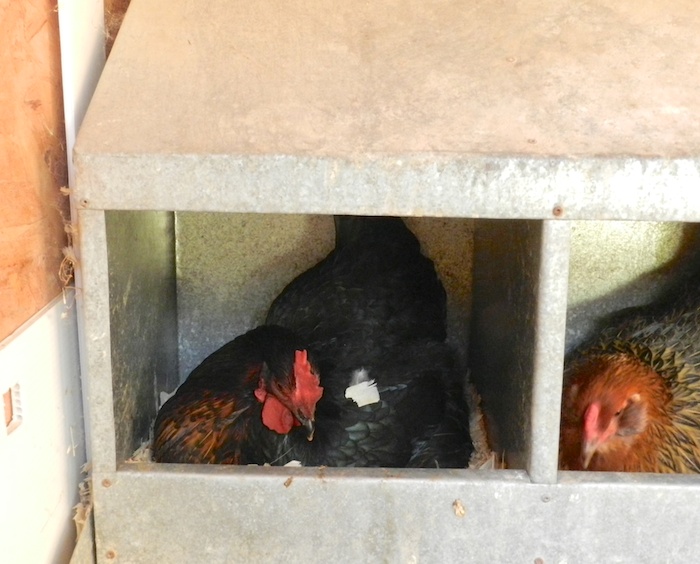 After about a half-hour, Nancy stood up and laid her egg. You can see how strong those legs are. It wouldn’t take much to smash an egg. I think the surprising thing is that it doesn’t happen more often! 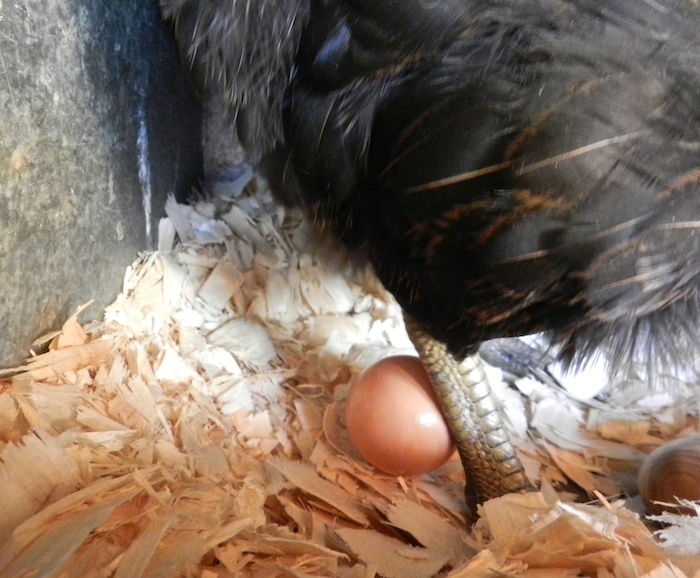 But, Nancy didn’t break her egg. She used her beak to position it under herself, fluffed up and sat down. 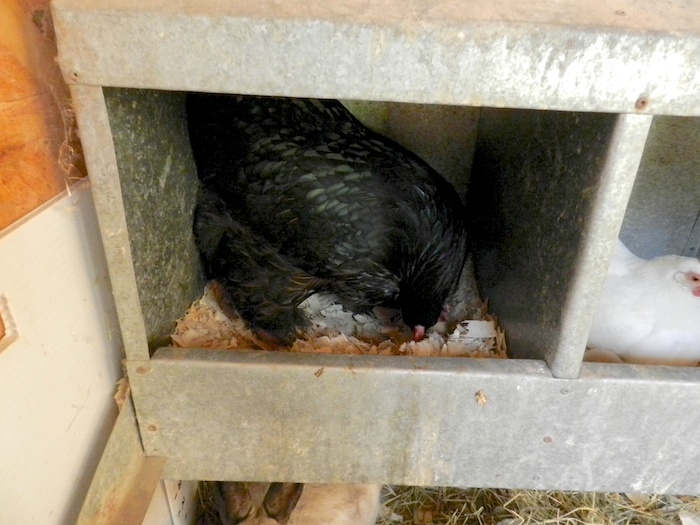 She stayed there for about ten minutes, then calmly got up, hopped out of the box and went over to the feeder to eat some pellets. Unlike some of the other hens, who noisily announce their achievement (Beatrix, I’m talking about you) Nancy was calm and quiet. Once sated, she left the coop, with nary a thought about that egg in her mind. 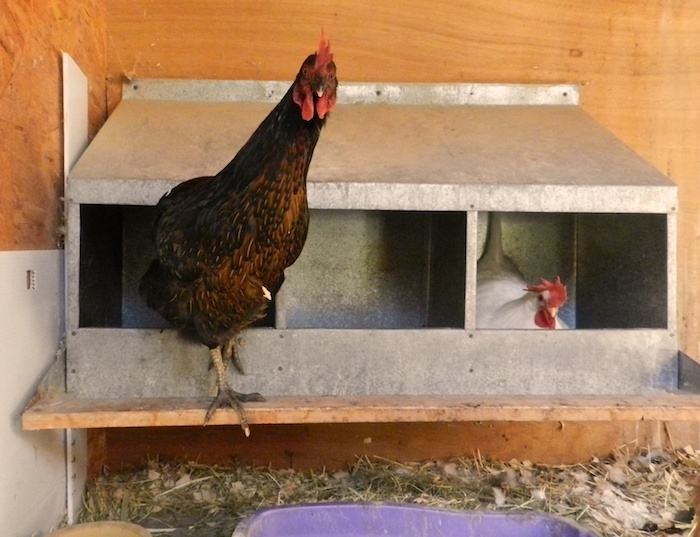 Obviously, Nancy Drew was wrongly accused. (Didn’t this happen in the Nancy Drew books?) But, what of the other hens? Is there an egg eater in the lot? I observed Beatrix and Twiggy lay their eggs. Both hens showed exemplary behavior. Betsy Ross, however, was a pest. She watched from the roosts. Although no longer broody in the sense that she doesn’t spend her days in a nesting box, that little hen is hard-wired to sit on eggs. As soon as she spied a hen laying, she tried to wedge herself into the box and claim the egg. Twiggy was really ticked off at her.

Here’s Twiggy, huffed up to twice her size, giving Betsy the evil eye and churring angrily. 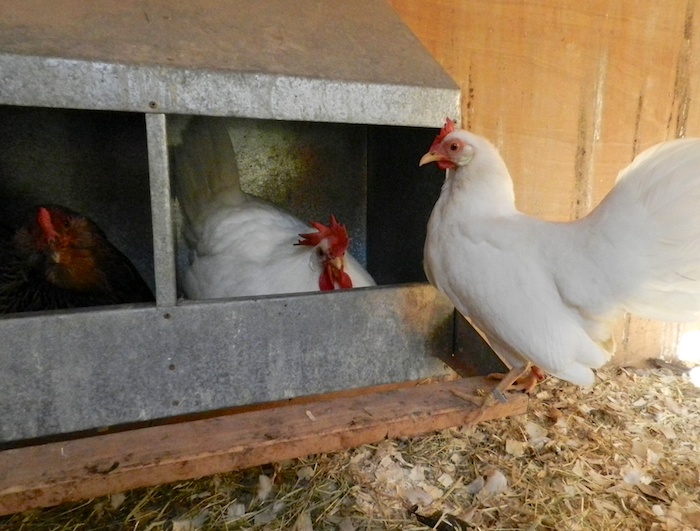 Perhaps Betsy has been causing the hens to break eggs in their attempts to get her to go away. In the past I have found tell-tale egg yolk on Betsy’s white breast. But, I haven’t caught her in the act. Perhaps she is innocent. I have some more sitting in the coop to do.

Have you entered the book giveaway yet?