Siouxsie died this morning. I found her on the floor of the coop. The other hens ignored her body, which is how they usually react when one of them passes on. I was not surprised to find her dead. Actually, I’d expected to find her gone well before now. For a year she’s had stretches of labored breathing. She was a regular layer of medium-sized white eggs, but she often looked stressed before laying. Yesterday I noticed her flagging her tail in discomfort and gasping. But, she continued to move about and eat, and at night she roosted with the rest of the flock.

If her distress was new I would have given her an epsom salt soak. But, I’ve already applied my Spa Treatment to her a number of times. If a hen doesn’t perk up and stay recovered afterwards, then there is likely a serious underlying condition. I don’t believe in prolonging the lives of hens who are diseased. I’ve learned how to do necropsies. I’ve opened up enough birds to know that they can live a long time with horrible ailments and are likely suffering for longer than we realize.

This afternoon I did a necropsy on Siouxsie. As always, what I found inside was unexpected. She was the first older hen (Siouxsie was four and that counts as aged) that I’ve examined that was not tumorous. She was also the first with a functioning ovary with developing yolks. She had an egg, fully formed with the shell, halfway down her reproductive tract. Yesterday she tried to lay it, but could not. Did that make her “egg bound?” The assumption is that an egg bound hen has a stuck egg, and with help (massage, bath, oil, poking with a finger) it will come out and all will be fine. I think that those assumptions are usually far from the truth, and doing the necropsy confirmed my belief that there was much wrong inside of Siouxsie, and that it was a kindness to let her pass on.

The first thing that I found inside of Siouxsie was a thick layer of yellow fat on her right side. When a chicken has an uneven distribution of fat, then something is wrong with her metabolism. The fat, itself, will cause laying difficulty as it takes up space needed for the egg to move easily through the reproductive tract. Worse yet for Siouxsie, was what I found on her left side. There was a mass that looked like two white water balloons fused together, which were filled with what looked like yellow custard. It was the size of her drumstick and taking up precious space inside of her body cavity.

I’ve seen similar masses before, although none exactly like the one in Siouxsie. The reproductive tract is not a closed system. There is a gap between the ovary and the long tube that the forming egg moves through. When a yolk is released from the ovary, it must be caught by the infandibulum to begin its journey and development. If the egg material misses the entrance to tthe tract, you have what is called an internal layer. I’ve seen the body cavity filled with solidified yolks, with jelled whites, and with infected fluids. Siouxsie’s mass wasn’t anchored to anything, and it hadn’t broken up and caused peritonitis (infection of the bodily fluids) and so she must have survived for awhile with discomfort, but without it totally obstructing her bodily functions. Perhaps the mass shifted. Perhaps combined with the body fat there was no way an egg could pass. Perhaps it was something else. My necropsies are crude – I don’t sent tissue samples to a lab and I am still learning to identify disease. In any event, what is clear is that it is a good thing that she passed peacefully away today and did not seem to suffer.

Siouxsie was an infuriating bird. She had no chicken sense, no sense whatever, really, not even a sense of direction. She was the only hen who didn’t come when called. She attacked other hens and had no sense about when to back down from a fight, or even have any sense of why she was fighting in the first place. While the other hens kept their external parasites at bay with dust baths and grooming, Siouxsie needed applications of louse powder. She didn’t know enough to come in from freezing rain. Her top knot needed trimming in order to keep her dry, and so that she could see where she was going. Infuriating. Sometimes, though, the most ridiculous characters are the most fun to have around. She will be missed. But, no, I will not be getting another Polish for the flock. 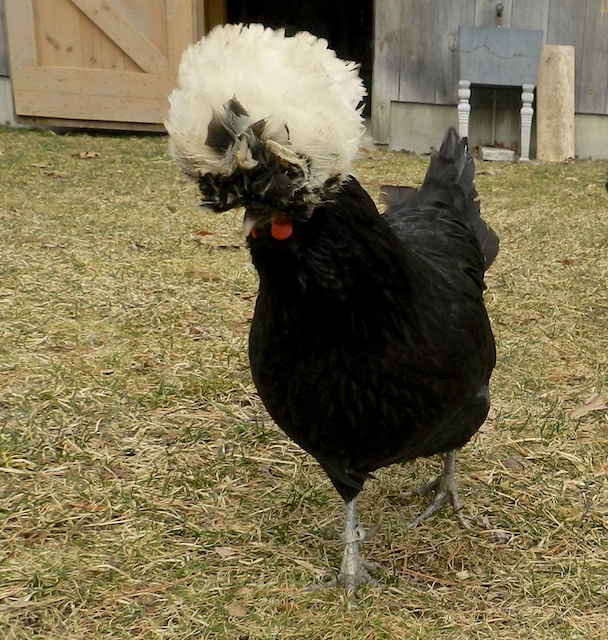 Someone has been rearranging the dirt in the corner of the Little Barn pen. 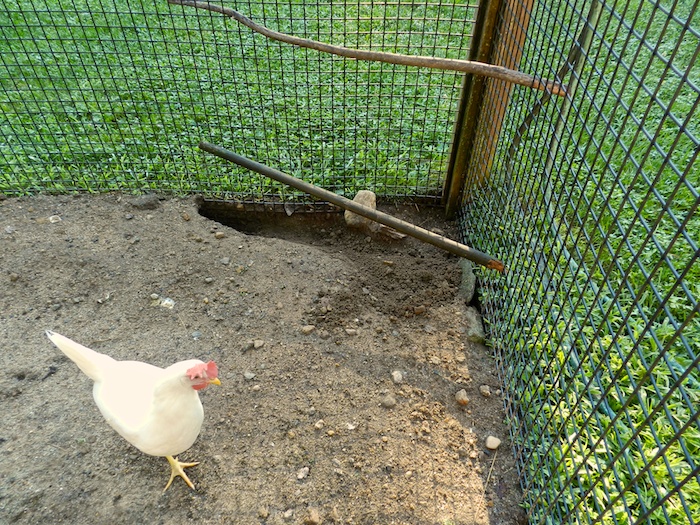 Misty says, That rabbit has been busy. 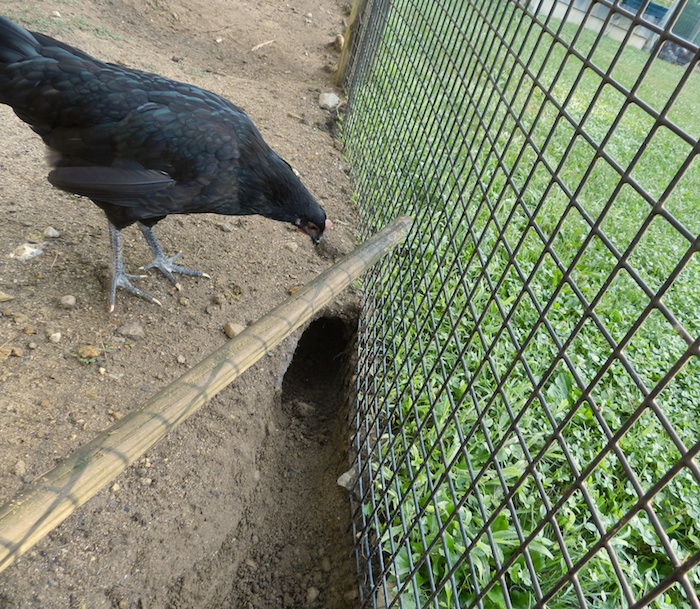 It’s getting rather deep. 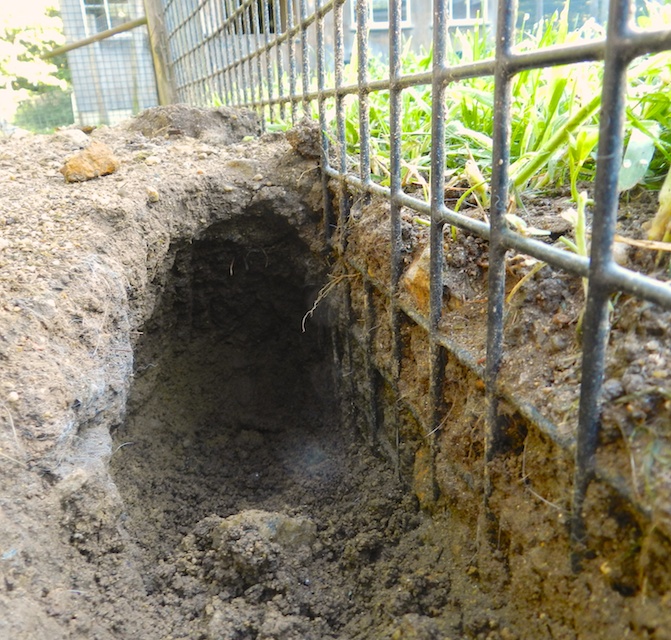 Rabbits dig and burrow. It’s something that they love to do and one reason why my bunnies have been so content living outside. It’s also why the fence is buried 8-inches below ground. But, that’s not far enough down to keep an industrious rabbit in. Rocks are being added along the edge. 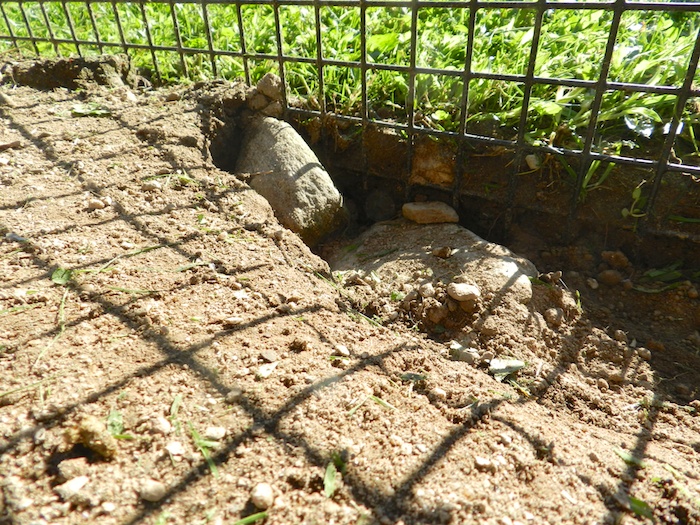 Don’t be fooled by that adorable innocent face. 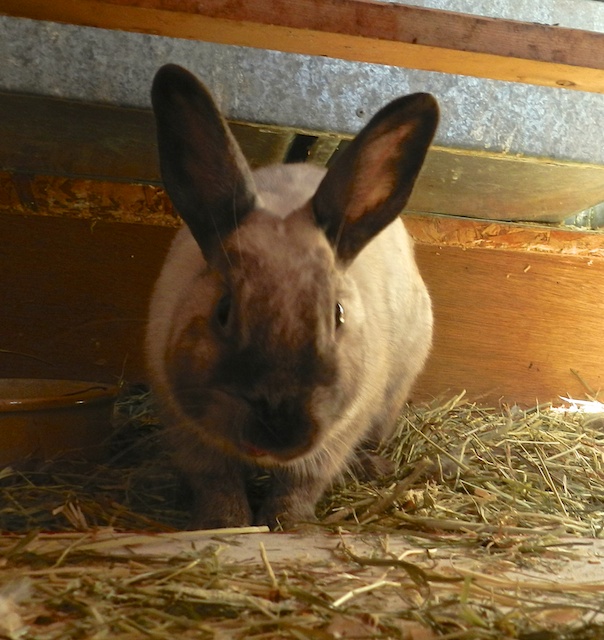 Phoebe says that there are plenty of other places to tunnel. She’s contemplating her next move. I’ll be checking the perimeter daily.

All flocks have pecking orders. Hens raised together since chickhood begin to sort out everyone’s status from day one, but it’s not fully decided until they are mature. Right now, the Girls are teenagers. There’s a lot of running, chasing and testing of boundaries. I’ve managed their environment so that this doesn’t escalate to aggression and bloodshed. Most of the time the interactions are subtle, but I already know who will be the Top Hen.

When I let the Girls out for a bit of time on the lawn, look at who strides out in front. 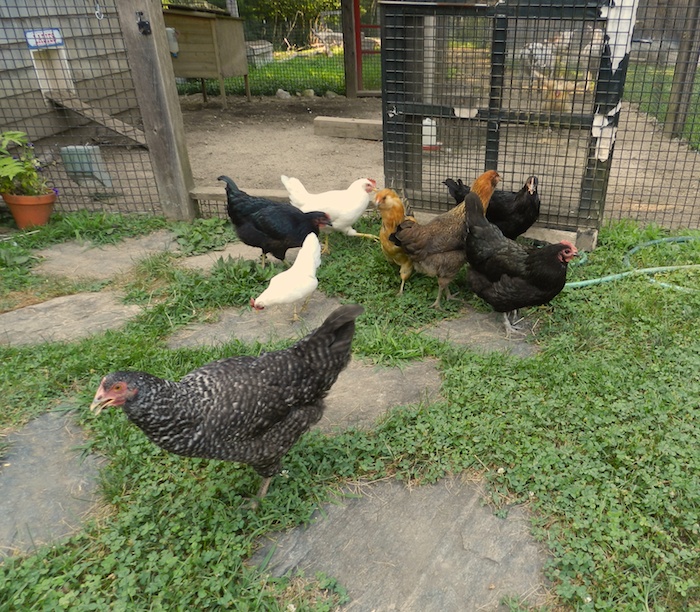 While the other hens spread out to graze and hunt for yummy tidbits, 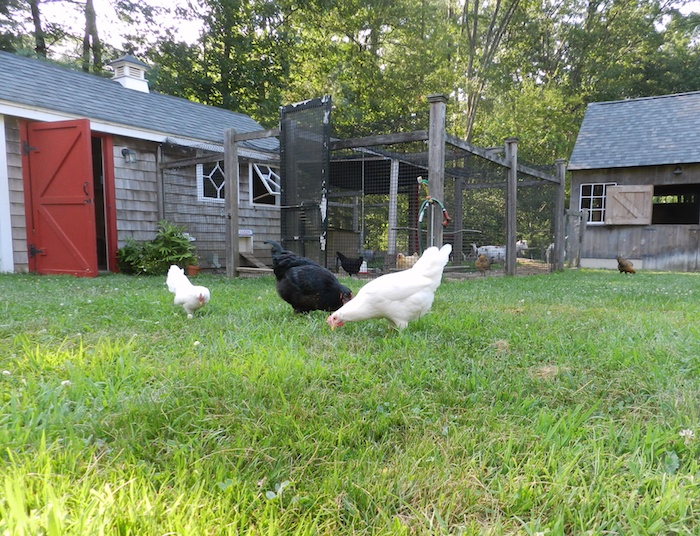 one hen would rather take a look at what I am doing. The Top Hen ruins a lot of photographs. 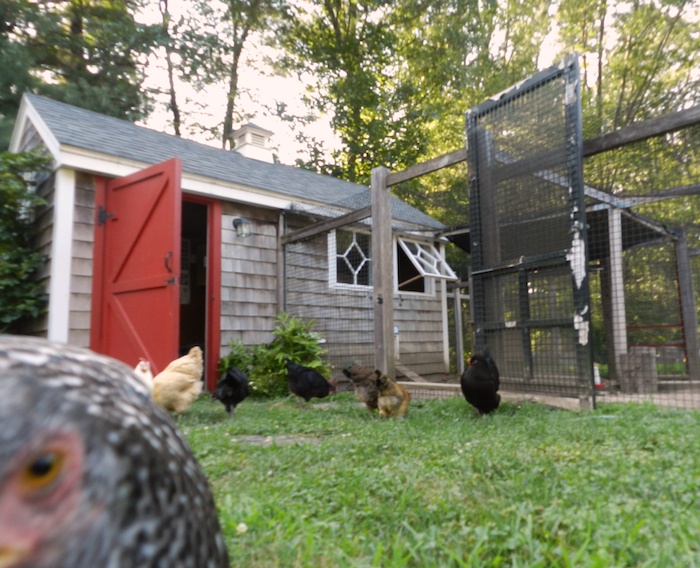 You don’t need a telephoto lens when trying to capture the Top Hen’s image, 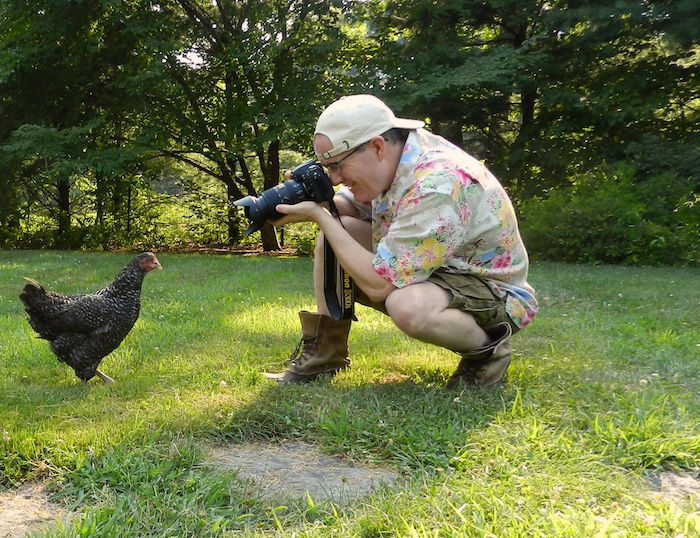 but you might need a camera that can photograph objects moving at speed. 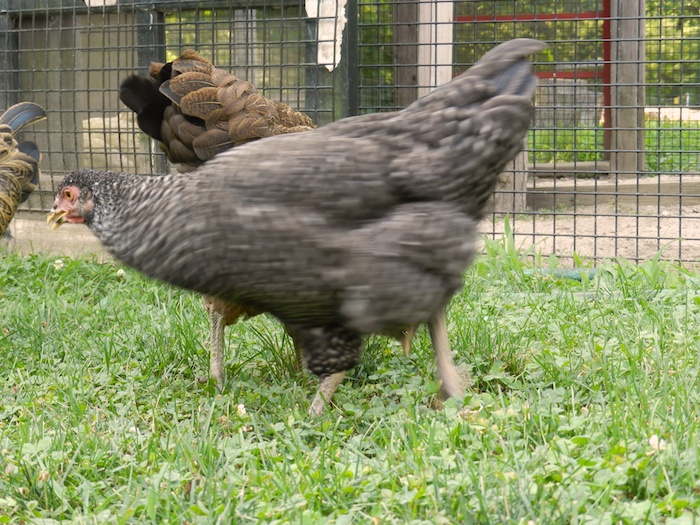 When confined in the pen, like a good Top Hen, Veronica is not a bully. But she does get first dibs on the kitchen scraps and rests where she wants on the roosts. Veronica is definitely the Top Hen of the young Girls, 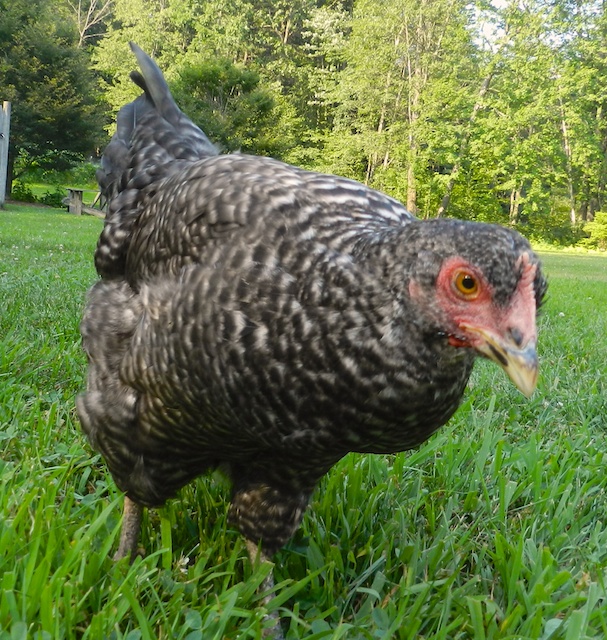 but she is no fool. She leaves the Grand Old Dames, Twinkydink, Buffy and Betsy, alone. 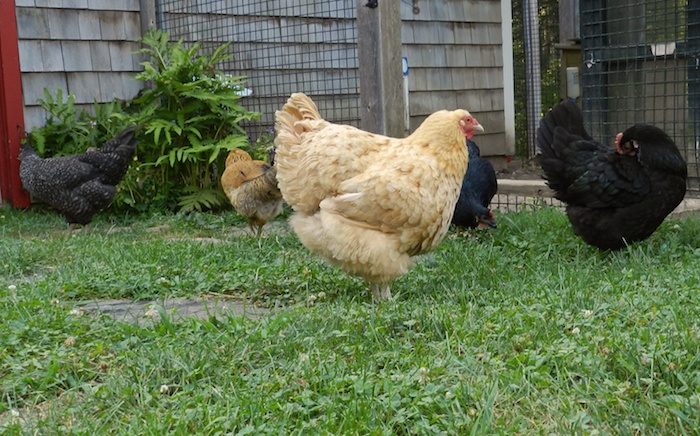 Last week, Jasper and I were invited to the Maude Eaton Girl Scout Camp. I read Tillie Lays an Egg. I talked a lot about chicken poop (always a popular subject!) and chicken behavior. I taught the girls the word omnivore and Jasper illustrated its meaning by sharing their pizza and bananas. Then, they all got to pet her. Children are always surprised by how soft feathers are.

Afterwards, while I packed up, the girls made chicken cluck noisemakers out of plastic cups. What a great craft! I have a teacher’s page for educators. I’ve added the “clucker.”  I also have an annotated list of my favorite children’s books about chickens. Stuck inside on a rainy summer day? You’ll find plenty to keep your young ones busy  on those two pages.

Here is a photo of Jasper at camp. (For privacy reasons, I don’t have photos of the Scouts.) 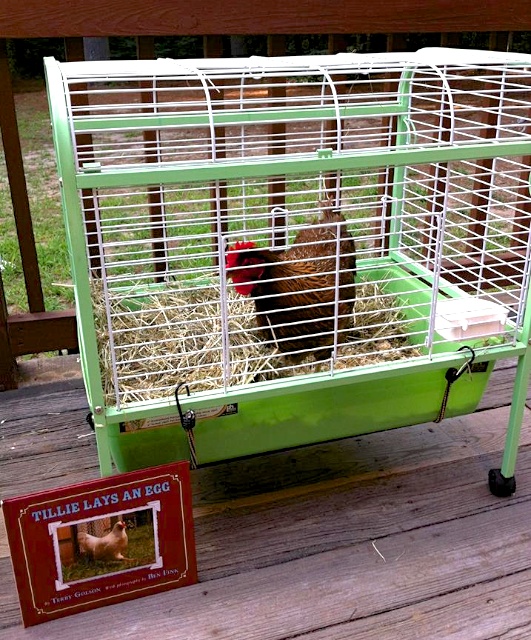 I’ve already posted this on my FaceBook page (if you haven’t yet, do friend me!) It turns out that many of my readers were Girl Scouts and they had ideas for badges that Jasper could work towards (she is now an honorary Scout.) What about Creative Nesting? Scratching and Pecking? What do you think? I can just see her in her sash arrayed with badges…

(Please share my Teacher’s Page with educators. Let’s get more children to learn about chickens!)

The pullets at the nursing home are doing great! I checked in several times during the heat wave, and they weren’t suffering from stress during that hot and humid spell. Of course, the nursing home has an ice machine, and so a tub of ice was put into their run daily. The kitchen supplies the chickens with plenty of greens and cantaloupe. The hens vote that kale is their favorite. They also get the occasional outing onto the grass. 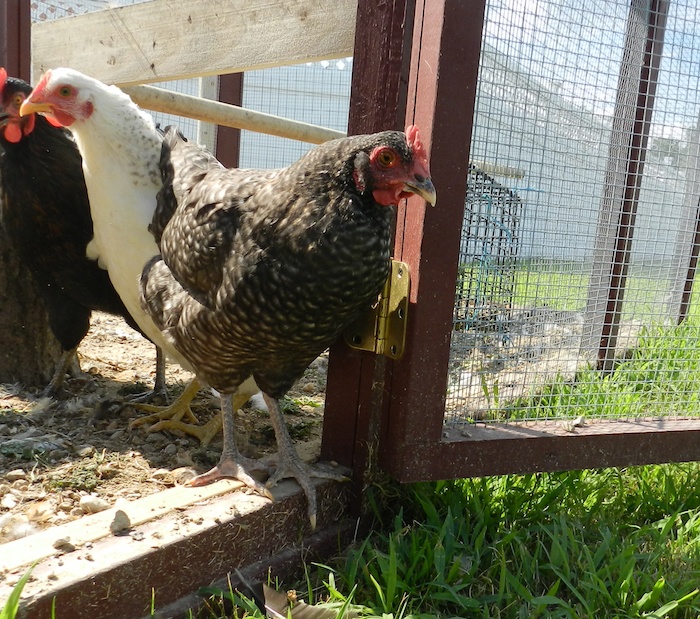 A shade tent has been set-up for the comfort of the elders and their visitors. 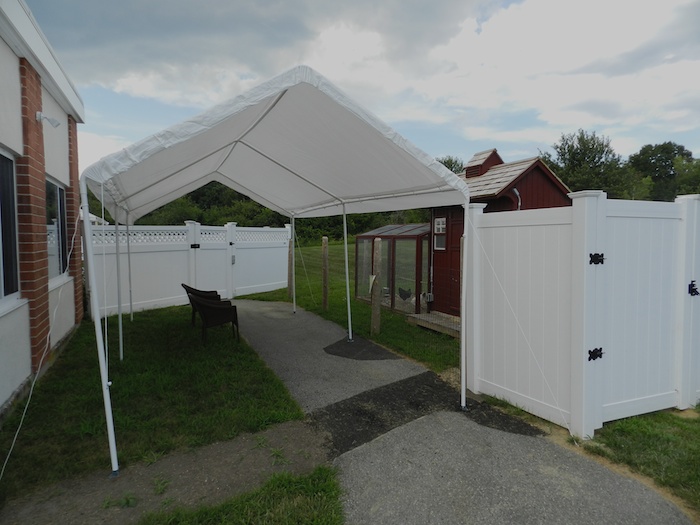 But on this extremely hot day, the residents watched from the window. 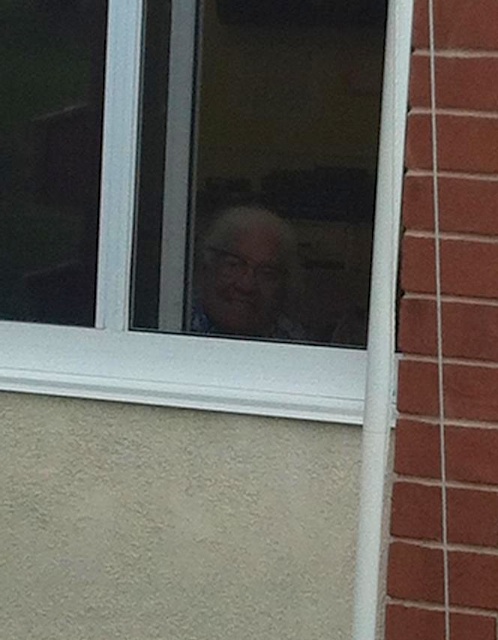 I have put together a packet of information that I can provide to facilities interested in bringing chickens into the lives of their elders. I am also available to do a one-hour enrichment program at nursing homes within driving distance of my home near Boston. Email me with contact information for the facility, and I’ll send the packet out.