Here in America we’re heading into a long holiday weekend, Labor Day, that marks the end of summer. It’s always a weekend of transitions, and this is a big one for my family. One of my sons is leaving tomorrow to go back to college, and the other begins high school on Tuesday. It seems as if all of a sudden the garden switches to fall-mode, too. Pumpkins are ripening and there’s a hint of orange is in the trees (the goats are pleased about that and are snarfing up the first of the fallen maple leaves.)

But, for today at least, the temperature will be hot – in the 90s – and the frogs will be hanging out in the pond. 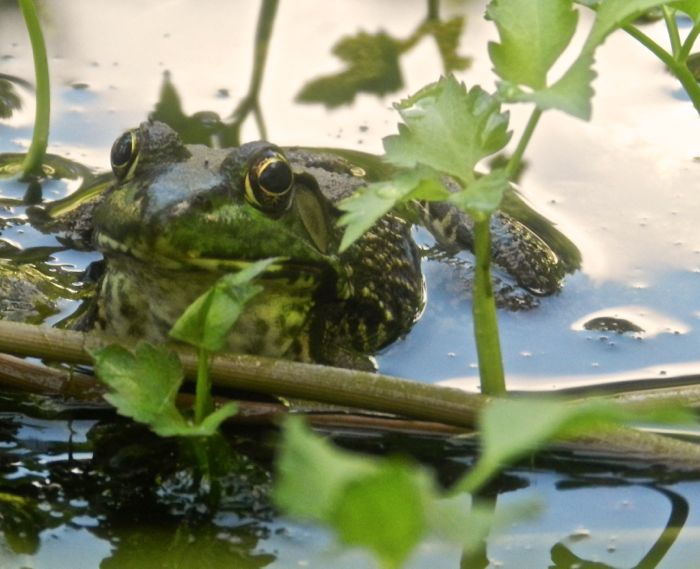 I’m working flat out on several projects (I hope to tell you about them soon!) but I’m going to take a break today and join the frogs. I’ll catch-up with you on Monday!

Most of the animals that I live with do not exactly have mellow temperaments. Candy is imperial. The Speckled Sussex hens are loopy. The goats thrive on mischief. Lily is a genius dog who is on the lookout for alien invasions and squirrel armies (perhaps the same thing?) And yet, I want the animals that I share my life with to be polite. Despite the potential for chaos, this is not an unattainable goal. It takes me knowing what I want and communicating that consistently. This requires time and training. But mostly it takes an attitude of calm stewardship.

When I posted about how to hold a hen, I heard from many readers about how they embrace their chickens. I also heard about hens that cannot contain their enthusiasm and leap onto shoulders, which makes for a hilarious story, but not one that I would want to have happen more than once. Personally, I don’t want  a five-pound hen (who has likely just stepped in manure) flapping her ungainly self at me in an attempt to roost up on top of my head. Even if I found this acceptable, I wouldn’t want this to happen to a guest or a child.To ensure that your hens greet you and your friends politely, let them know that good things happen on the ground, at your feet, not near your face. Feed them treats tossed away from you. Do not feed them from your hands when they get pushy and peck.

Sometimes, though, it’s fun to have a hen on your shoulder. It certainly makes for a funny photo. Clearly, these women and their chickens are familiar friends. The birds look quite calm and polite. (Do you think it a family photo with rooster, hen and feathering-out chick?) 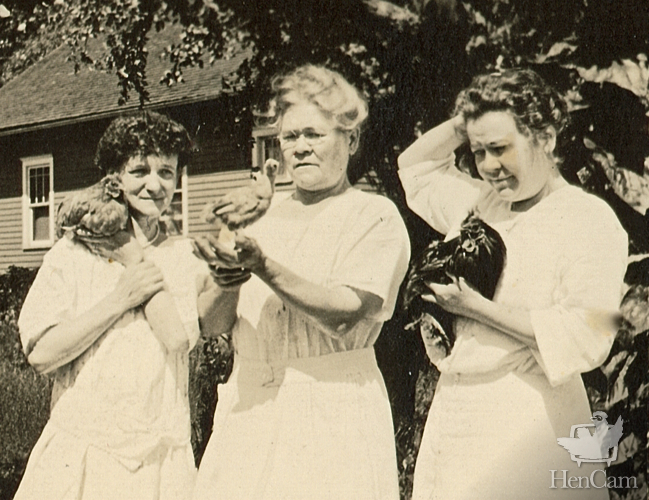 I’m sure that these ladies, with their long hair pinned up into buns, wouldn’t let one of their chickens leap up onto their shoulders. Can you imagine what a tangled scene that would be!

It’s late summer. The perennial flower bed is faded. The echinacea and Joe Pye weed are a dull dusty rose color. Petals are turning brown and falling to the ground. 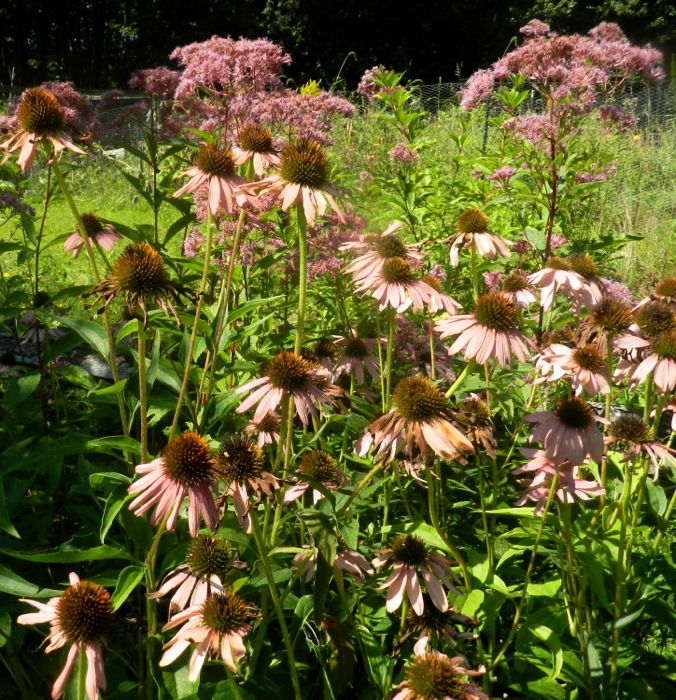 The bees are no longer interested in these plants, (they’ve moved on to the goldenrod in the meadow) but the birds are feasting on the seeds. 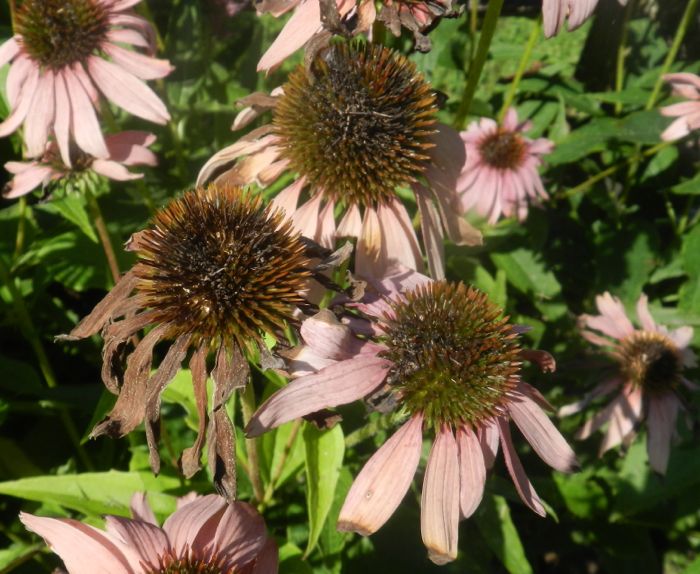 Despite the natural progression of the season, the herb garden near my back door is bursting with garish color. I’ve planted annuals that defy the season. Zinnias are in bloom. 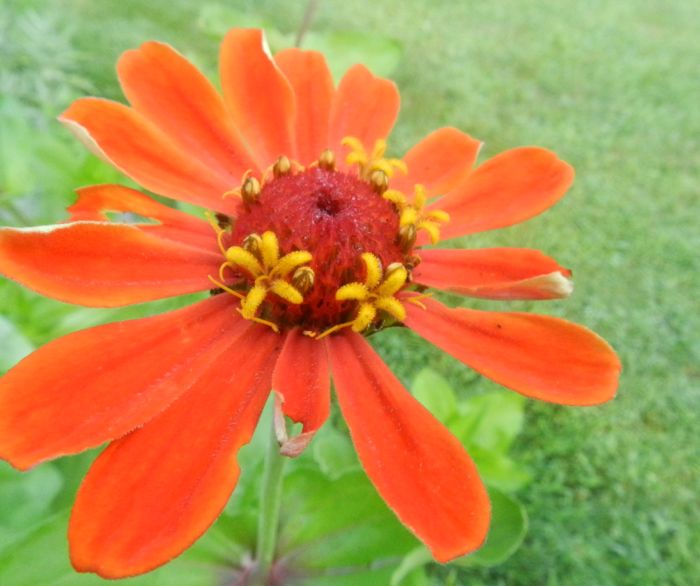 I just love how the center of each zinnia has what looks like a miniature garden of tiny bright flowers bursting out. 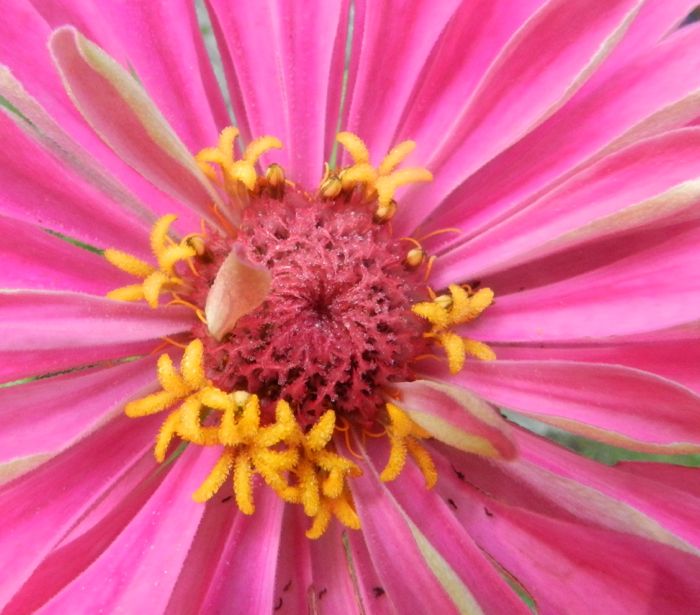 The buds have a charm of their own. You just know there’s a party of color in there about to unfurl. 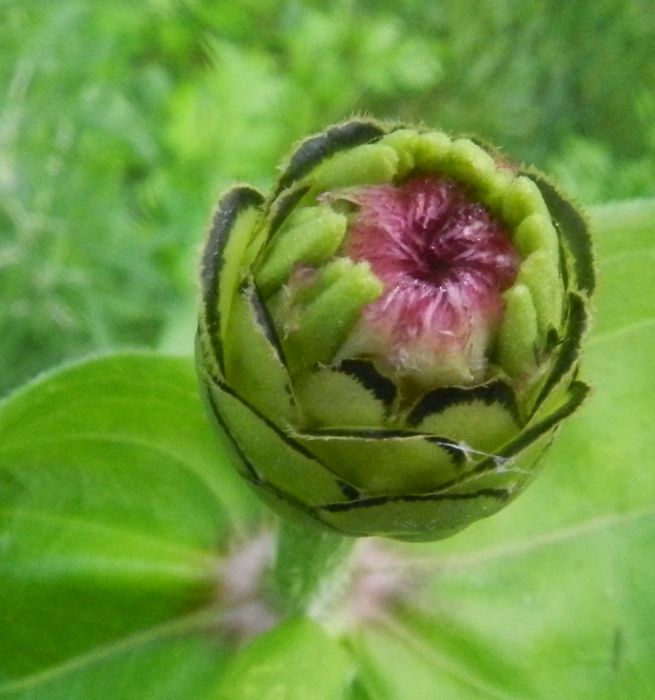 I’m not the only one to appreciate these outrageous blooms. 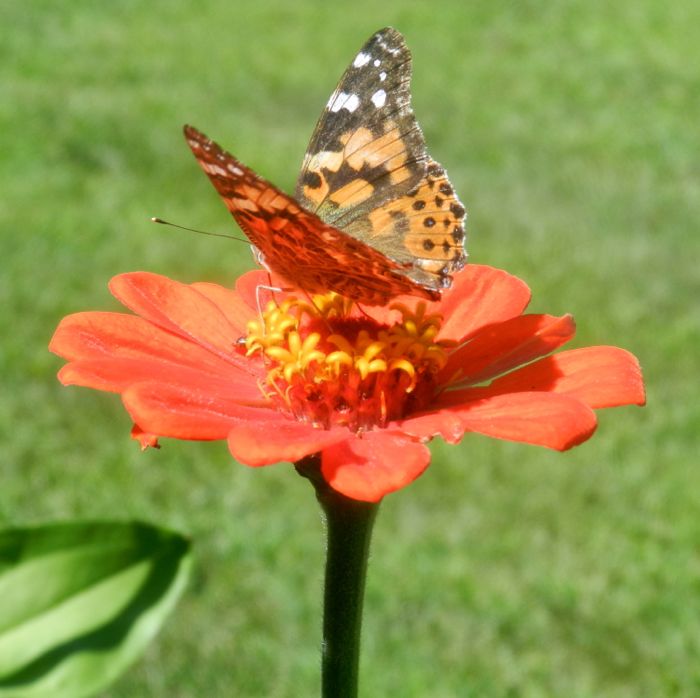 To someone not familiar with chickens it looks like the birds just mill around. Actually, despite the constant going hither and yon, they are hanging out with their friends. It becomes obvious when you take the time to watch a small group of hens that each chicken is selective as to who she wants to spend time with.

Usually, in a backyard flock of various breeds, hens that look alike form cliques. For years my two black Australorps, Twinkydink and Blackie, were inseparable and showed no interest in the other chickens (except to chase them away from what was theirs.) The expression “birds of a feather flock together” is true in a coop! But, there are always exceptions as the dynamics between the Gems illustrate.

There are twelve Gems, all 16 months of age, and they have been together since they were 3 day-old chicks. In the mix are seven different breeds.Two are Rhode Island Reds, named Garnet and Ruby. There is only one Welsummer, Jasper. You’d expect Garnet and Ruby to be friends, but that’s not the case. Jasper and Garnet are friends.

Yesterday, I let the girls out for an outing. Jasper and Garnet ate grass by the chairs. 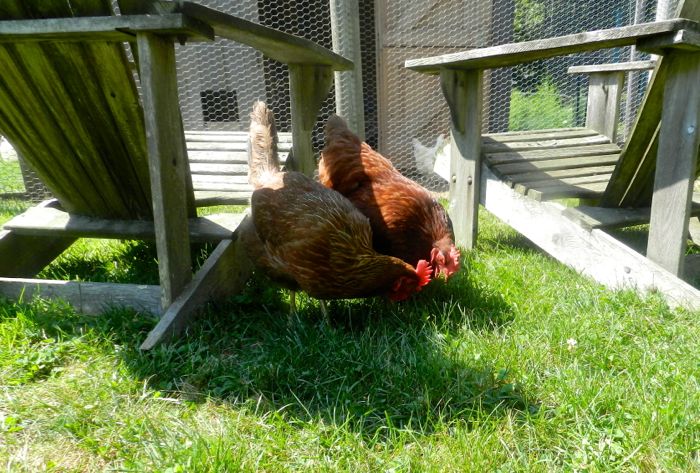 Garnet moved on to the back meadow. Jasper followed. 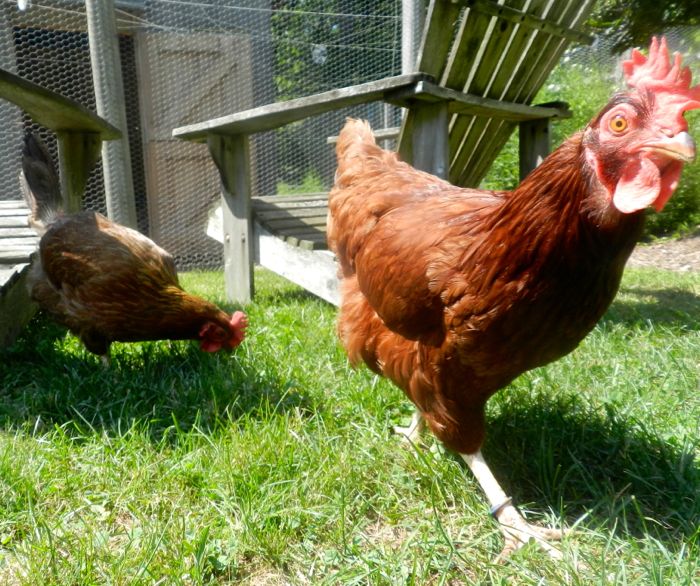 They foraged together for awhile. But then Jasper moved off to the flower bed. 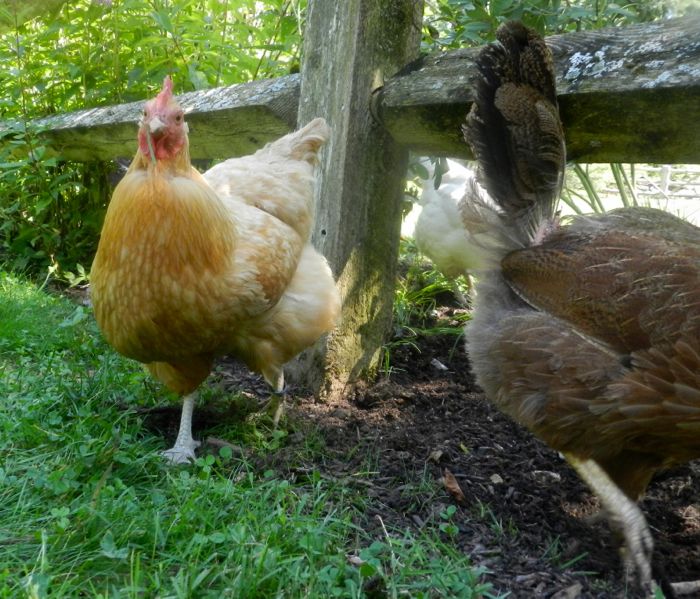 Garnet looked up from eating seeds on a weed. I’m alone! Where did she go? (The answer is, only a few feet away, but like a toddler, a chicken can snap from being happily busy to feeling abandoned in a span of a few seconds.) 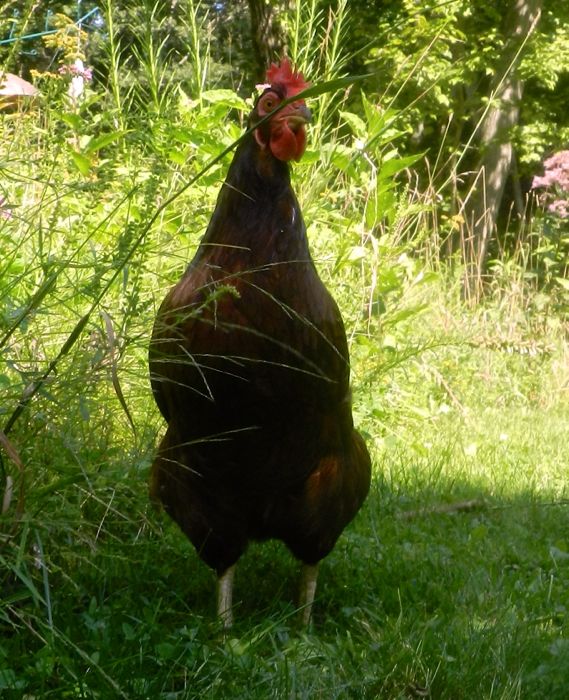 Garnet hustled after Jasper to join her best friend the clover. Together again. 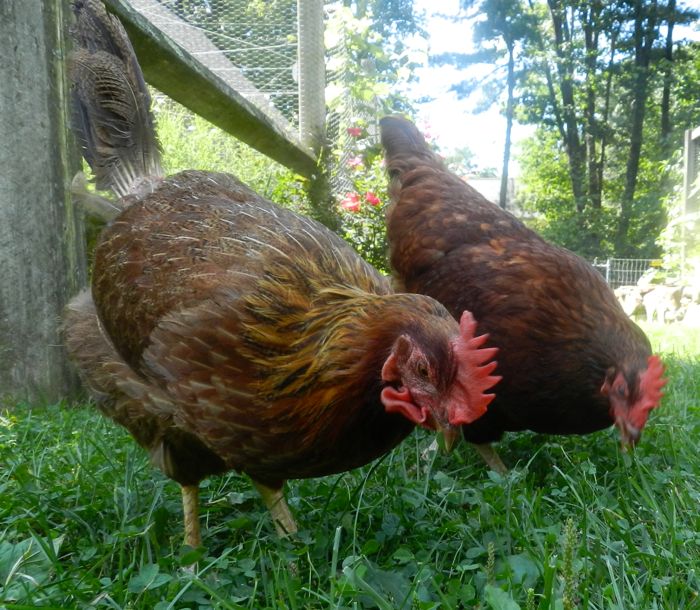 Are there any unexpected friendships in your flock?

Dragonflies ignore humans. It’s as if we don’t exist to them. Or, rather that we exist but are of absolutely no consequence. A person, standing in the right place, might be as interesting to a dragonfly as a branch to land on. Or not.  I try to imagine seeing the world through 30,000 facets, 360 degrees around, and with light in spectrums that I can intellectually understand but never truly experience. Despite taking in all of that incredible detail, to a dragonfly, my camera and I are of no importance. It’s as if dragonflies live in a parallel universe. I love that about them. 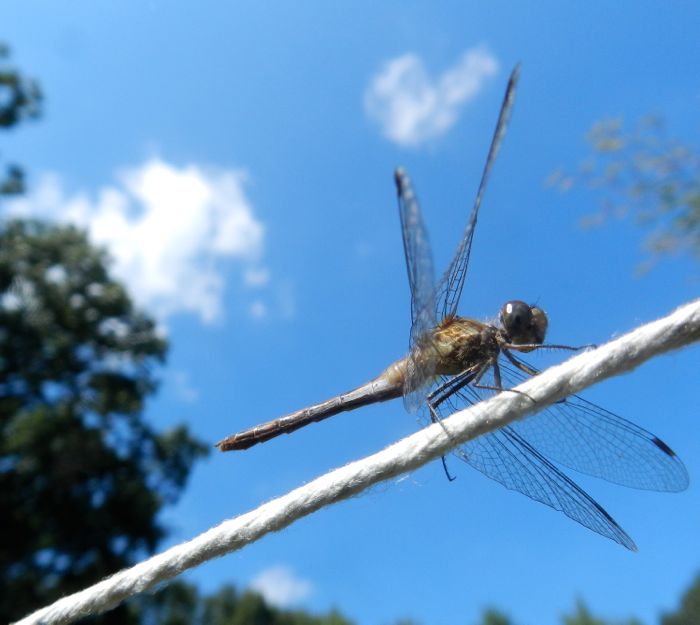