Four of the chickens in the Big Barn were hatched April 25, 2011 at a large midwestern hatchery, and shipped here through the United States Postal Service. I call them "the Gems" because they are named after rocks and famous women geologists. The "Literary Ladies" are younger hens and were hatched March 29, 2013. Watch these hens on the main HenCam, and you can see inside their barn on BarnCam. 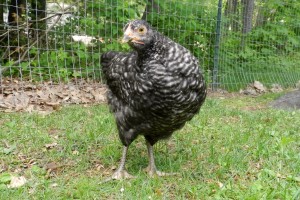 This Cuckoo Maran is friendly yet calm, and gets along well with others. I named her after a book that I loved as a child – Veronica by Roger Duvoisin. It’s about a hippo that looks like all of the other hippos, all of whom live boring lives in the lake. Veronica goes to the city, has adventures, and when she comes back she is not like the other hippos. She is a storyteller. This Veronica hatched March 29, 2013. 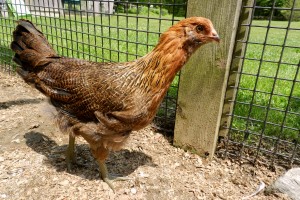 Owly’s funny personality was immediately obvious. Even as a week-old chick, she looked curious and she looked up. She also had the markings of a round-eyed owl, hence her name. Owly is not the prettiest Ameracauna, but she does have the heart of a clown, and her expressions are endearing. Hatched March 29, 2013. 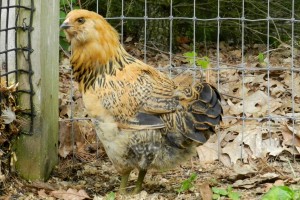 Beatrix is an Ameracauna with a classic face muff and gorgeous feathering, and what looks like a necklace around her neck. She is, like most birds of this breed, aloof but not flighty. She is named after Beatrix Potter. Hatched March 29, 2013. 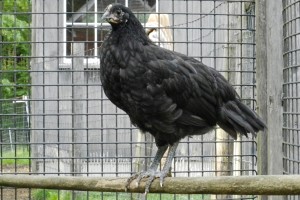 Misty is a Blue Andalusian. She doesn’t look anything like her namesake, Misty of Chincoteague; perhaps I should have named her Stormy, for another horse in that book series. I read every one of Marguerite Henry’s horse books, and this hen is my way of acknowledging those classics. Although this Misty has slate grey feathers, she will lay white eggs. Hatched March 29, 2013. 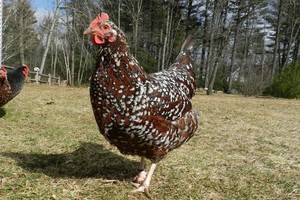 These two are Speckled Sussex. These hens, though of the same breeding, are unique unto themselves. In fact, all of the Speckled Sussex that I’ve had have all been full of character—friendly, active, curious and demanding. They might be my favorite breed. Florence is named after Florence Bascom, the first woman hired by the United States Geological Survey (in 1896). She is the smallest, quickest and smartest of the two. Agatha Agate is a very, very sweet hen of very little brain. She likes to sit on laps. She likes children. She would never peck anyone. Agatha is the perfect hen for school visits and is adored by many. 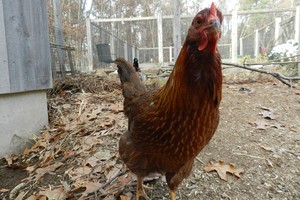 Jasper is a Welsummer, which is a light-weight breed. She is very pretty, and is curious, active and gentle. She is the only hen that has been picked on. For some reason, the other girls like to pluck out the feathers at the base of her tail. I’ve tried all sorts of remedies, but to no avail, and although it makes her look scrawny, it doesn’t seem to bother her. Jasper tolerates the feather-picking and no blood is drawn. Her eggs are dark brown. She is a very nice hen to have around. 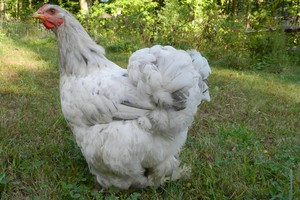 Pearl is a Cochin with blue-grey feathers. Cochins have masses of soft feathers all the way down to their toes. This makes them very pretty, but also high maintenance. They suffer in the heat, and when it is cold, get mud and snow stuck to their feet. Cochins are heavy-bodies birds, so waddle more than run. Pearl is a sweet, mellow bird.

There are other animals to get to know here at Little Pond Farm. Read their bios here. 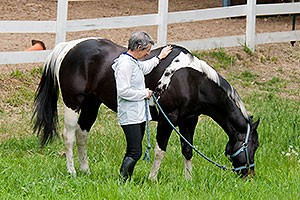 Although Tonka lives twenty miles up the road at a boarding stable, he is a part of our animal family. Tonka is a registered American Paint Horse and hails from Texas. He was foaled on February 11, 2006. Tonka was owned by a gentle trainer who taught him to be a sane trail horse. I purchased him in December 2013. Tonka and I do dressage and take long treks in the woods. For more about horses, see my other website The Cooperative Horse. 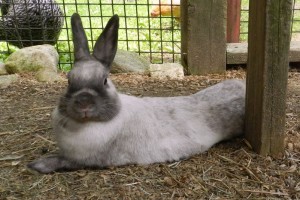 Phoebe is a mixed breed rabbit born sometime in April, 2012. She was adopted from an animal shelter where she had very good care and had been spayed. Phoebe is friendly and playful. 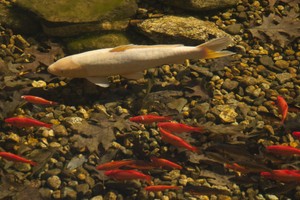 The Beast arrived at Little Pond Farm in 2003 when she was a little fish, no longer than two inches. She looked pretty – all white, with a big black spot on the top of her head. But as this koi grew, the spot didn’t, and now she is a pale peachy color. The Beast lives year-round in the water feature that we call a “pond.” There’s a big rock, with a fish cave under it, where this huge, savvy old fish stays safe from Great Blue Herons, and hibernates in the winter. Smaller goldfish, and goldfish/koi mixes keep her company. 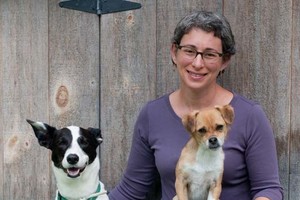 Both of these dogs came from rescue organizations. According to DNA tests, Lily is Collie, Chesapeake Bay Retriever, Dalmatian and Husky. She’s unique! She’s smart and has a high prey drive. She’s a good farm dog – she chases hawks out of the sky and keeps raccoons away. She was born sometime in April, 2003.

Scooter’s mom was a mixed-breed stray. DNA testing tells us that he has a lot of Chihuahua and Shih Tzu in him, too. Scooter’s job is to be a pest to Lily to keep her busy (he gets her to play by biting her toes). They are our comedy duo. Scooter was born January 8, 2007. 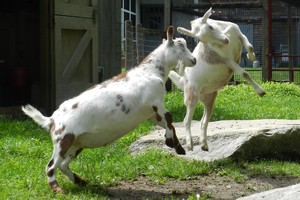 Pip and Caper are twin brothers, born on April 26, 2009 at Village Haven Farm in Maine. They are purebred Nigerian Dwarf Dairy Goats. Pip and Caper are pets. They’re gelded males, and their only job is to delight and amuse – which they do very well! They also help to keep the back meadow free of briars and poison ivy.

Caper is the goat with the darker splotches. He is the talkative, loud boy, and the smarter of the two. Pip has the caramel-colored markings, appears to be always smiling, and is the domineering one (you’ll see him butt Caper away from the food.)