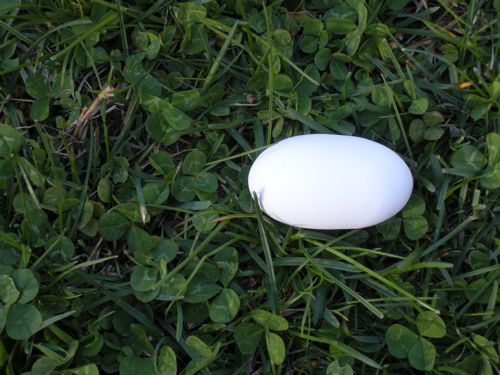 a) a giant’s tic-tac mint

b) a horse pill

c) an egg laid by Siouxie

You’re right! The answer is C. It’s the odd egg of the week.

Roosters crow. Even if you’ve never seen a rooster in real life you know what he sounds like because we grow up with storybooks about roosters, sing songs about them in elementary school, and have watched cartoons with pompous rooster characters. In English, we write the noise as cock-a-doodle-do! Other languages have different words, but they are always loud and brash, and instantly, universally recognizable as rooster talk.

Hens, when their voices are written about at all, are usually relegated the boring cluck. This is a shame, because listening to the hens talk is one of the pleasures of the backyard chicken keeper. Just like human voices vary, so too, do chickens have voices unique to themselves. Some chickens don’t say much at all. In the five years that I’ve had Twinkydink and Blackie, I don’t think I’ve heard either of these Australorps say more than chirrup once or twice. The Bantam White Leghorns beep. Little voices for little hens. During school visits, Coco will, once in awhile, look at a child say beep-beep. It’a chatty and sweet. The whole classroom hushes when they hear her.

Buffy has recently been quite loud, which is very unusual for my placid Buff Orpington. Two years ago, she almost died from a mysterious paralysis. She couldn’t stand up for weeks, and it took months  for her to start acting like a healthy bird. She hasn’t laid an egg since, but lately, she’s been sitting in a nesting box each day, and  then loudly gets down. Chud-bup! But-but-BUT! Maybe there will be an egg soon?

On the far end of the talkative scale is Marge. She’s now six years old, and every day of her life she’s been vociferous. She announces her entrance into the coop, and then let’s everyone know when she’s leaving. When she sees me she complains that I haven’t fed her lately. She says buk-BUK-BUKBUK-BUK! I’m glad she’s not a rooster, or she’d be unbearable. Her sister New Hampshire Red, Petunia, listens in, but rarely says a thing.

Lulu, being a scatter-brained hen, talks on and off during the day. I’m not sure what she’s saying. Sort of like a crazy person who talks to herself. Chuck-chuckle. The punk rock hens, Tina and Siouxsie don’t say much. Nor do the Golden Comets. How much and how loud a hen talks is linked to breed. Then again, that doesn’t explain Marge. 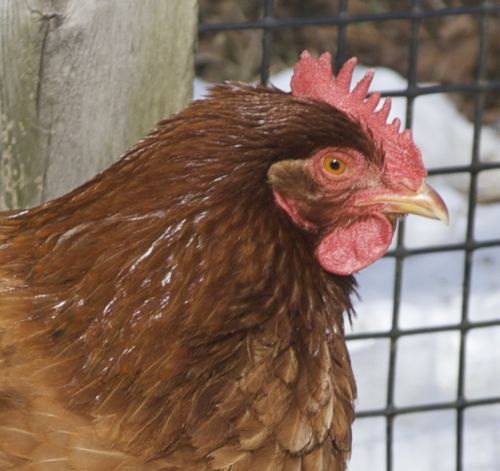 Goat are silly animals with big personalities. They have beards. They stare. They talk. They get in your face and climb on your lap. It’s no surprise then, that artists don’t take them too seriously. Do a google image search for “goat art” and you’ll see what I mean.

However, beauty is all in the eye of the beholder, and as comical as my boys are, they are also beautiful. So, I was thrilled when, at the Boston Museum of Fine Arts, I came across these andirons. 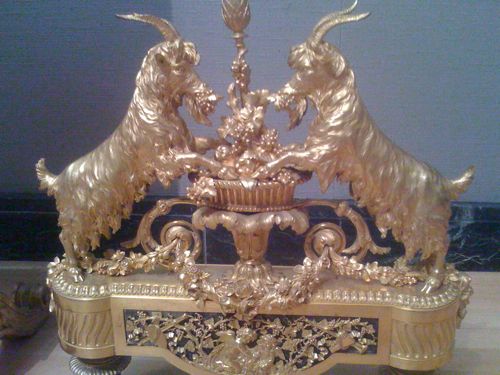 They were crafted in Paris in 1785. Imagine them with a blazing fire behind. Glowing gold goats! Alas, the gift shop doesn’t sell reproductions.

Thank you all for your birthday goat wishes. For a special treat, I let my boys graze under the oak tree. They ate their fill of acorns, and then trimmed my oregano patch for a digestif.

Pip and Caper are a year old today! They are twin brothers, and like many siblings, they look and act nothing alike. Also, like many brothers, despite jealousies and head buttings, they are best friends.

What should they get for their birthday dinner? Acorn cake? Bramble salad? Clover pie?

The goats make me happy. I’ve yet to meet a person who doesn’t go gaga over my goats. Try NOT to smile when you hang out with them. Impossible! Even when they jump on the goatcam camera and break the housing and Steve has to spend much of Sunday fixing it, he still smiles at the goats. That says something! 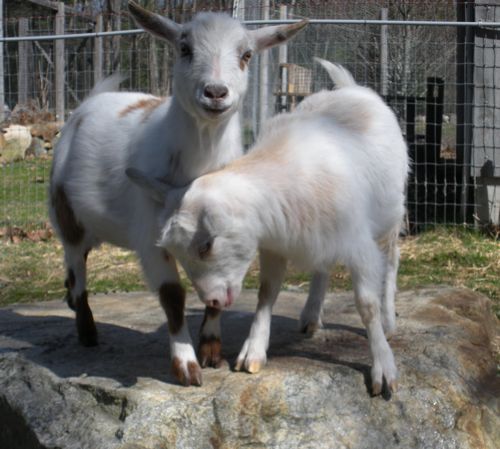 It’s April School Vacation Week here. Fortunately, we hadn’t planned an extravagant European vacation, so we were spared a long holiday in an airport (although my husband, who has a degree in geology, would LOVE to visit Iceland!) We decided to drive up to Montreal – about 300 miles. Why?

a) we thought there’d be very good croissants there. My boys love croissants. The baked goods proved to be only so-so (anyone want to give me suggestions for next time?)

b) my 16 year old son has his driver’s permit and we promised him that he could get a lot of highway experience. He’s a good driver, however, it turns out that I am a terrible backseat driver and by the trip home, no one could stand it anymore and I got back behind the wheel.

c) we’d never been and we wanted to go somewhere that looked and sounded different. Since all of the signs were in French, it did feel as if we were far away!

The best part of the trip was the afternoon we spent at the Montreal Botanical Gardens. We were quite disappointed that the Insectarium was closed – the insect keepers were on strike – but the gardens were open, including a butterfly house that was magical. The greenhouses were lush and filled with wondrous plants. Outside, not much was in bloom of course, but I saw this garden arch that I’d love to replicate in my garden. 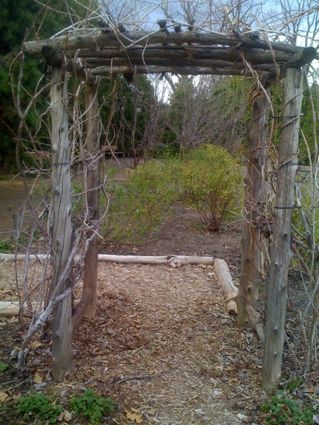 This rock garden was fascinating! 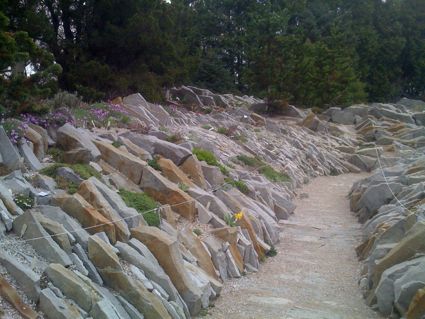 The rock slabs are laid vertically, and they catch heat and rain water. The plants grow in the crevasses. But, now that I have goats, instead of fully being able to appreciate it’s beauty, I thought about how much the kids would like a playground like this in their yard.

We were gone for only four days. It’s spring, so change happens quickly. Flowers are in bloom, the croci are already wilting and the dandelions are up. However, the goats are still shedding.