This is what my asparagus bed looked like on Saturday: 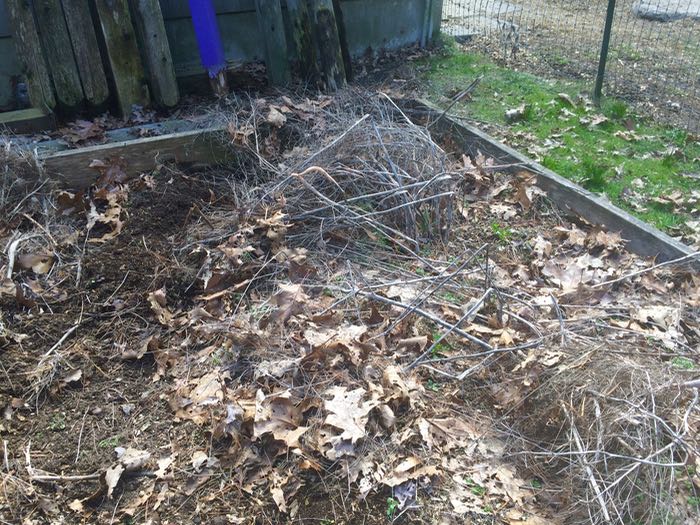 Obviously, it needed a serious cleaning up. Luckily for me, I have friends to keep me company as I work. 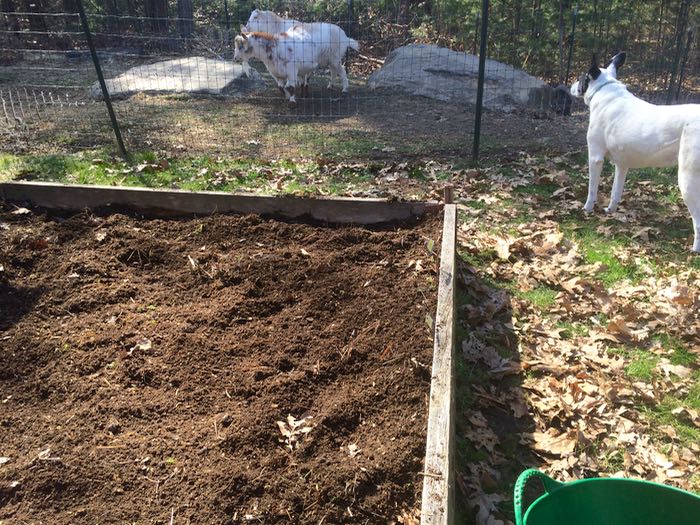 Yesterday I spent some time in the vegetable garden, raking leaves and taking stock of what needs to be done next. The goats helped. 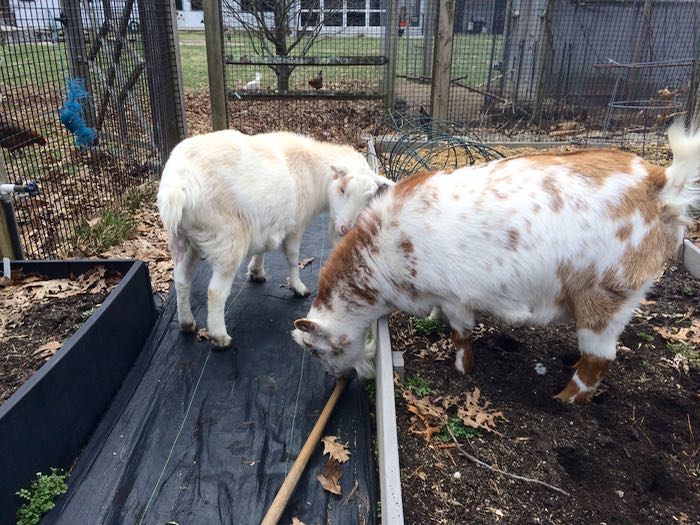 I let the Girls out, too. They were more helpful than the goats.

They helped get rid of overwintering bugs in the pumpkin patch. 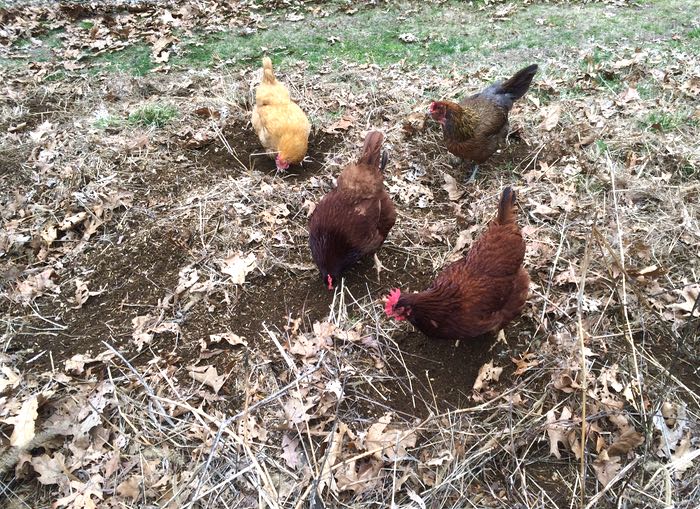 They tidied up the butterfly garden. 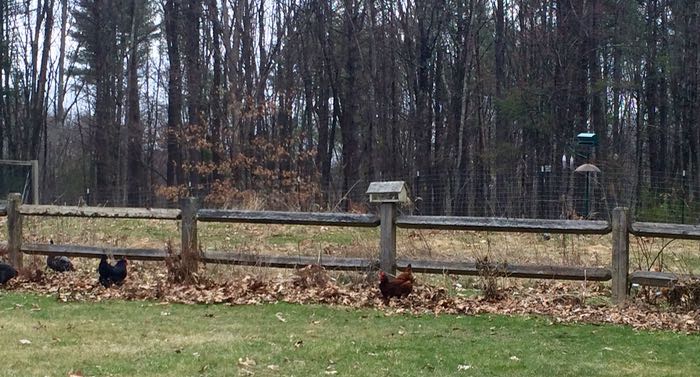 They fertilized the lawn (which obviously needs as much help as it can get – I’ll be reseeding soon!) 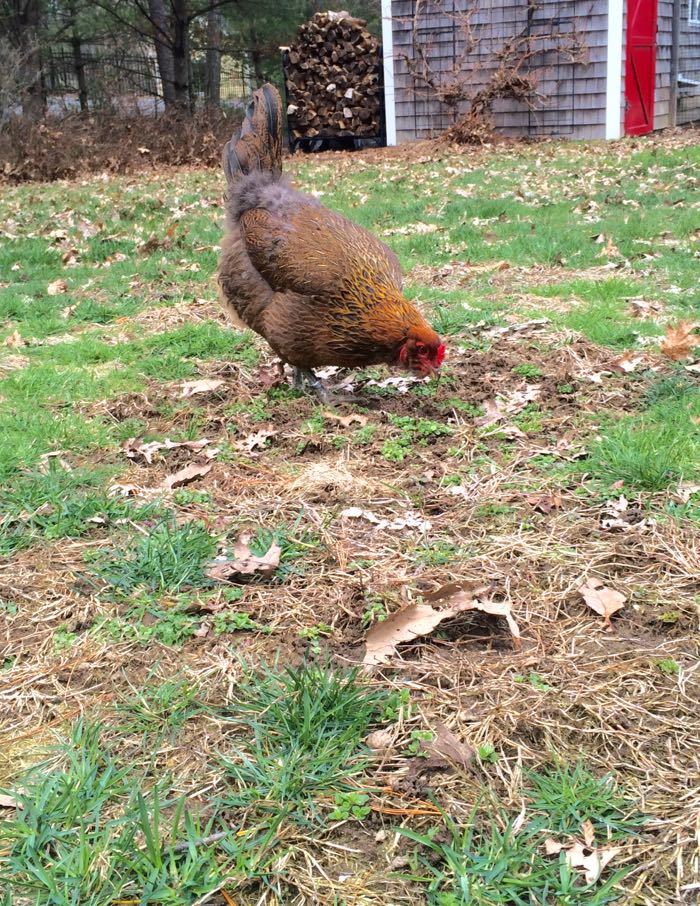 They looked under the leaf cover near the roses for grubs. 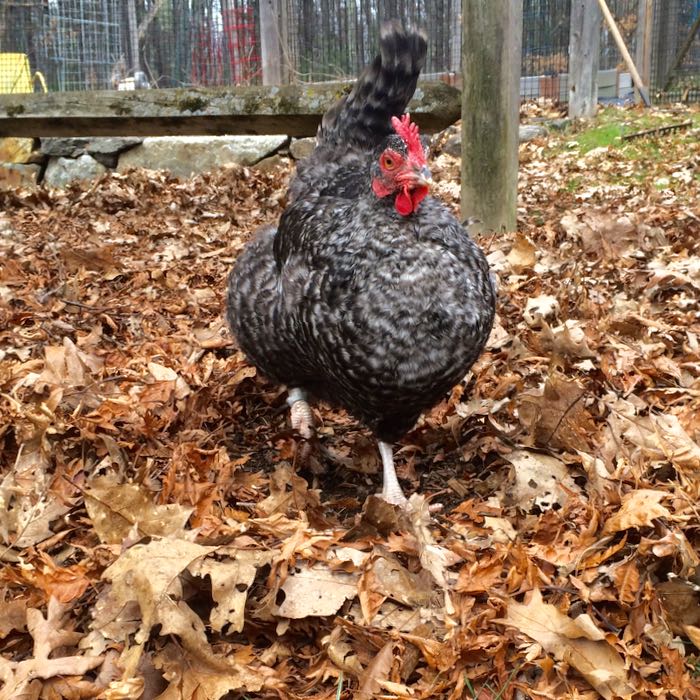 When it’s time to put them back into the safety of the coop, all I have to do is shake a canister of cracked corn and holler Girls! and they all come running home. (Watch this video.)

Still, I always count the hens to make sure that there’s not a wayward hen too distracted by the great outdoors to come back to the coop. Yesterday, I called them home and counted thirteen in the run. I have fourteen hens. Beulah was missing. I looked in all of the usual spots. Under the wood pile (a favorite dust-bathing site.) Not there. In the deep leaves of the raspberry patch. Nope. Behind the asparagus bed. Not there. I called. I shook the can of scratch grains. No hen.

I looked in the barn. I didn’t see or hear anyone. But I had a thought. Do you see that gap between the hay bales and the wall? 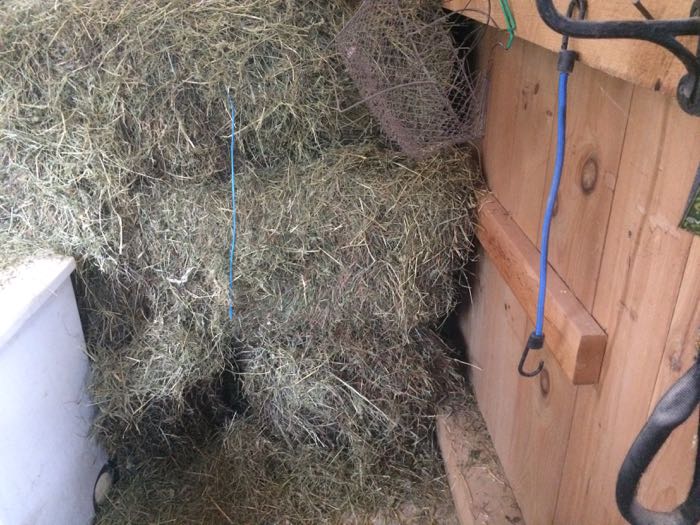 Beulah was there. She must have thought it’d be a fine place to lay an egg, but then discovered that she was stuck. She couldn’t turn around and she couldn’t back out. I reached in and extracted her. Beulah was quite relieved to rejoin her flock. So, the lesson of this story is to always count your hens!

Last week I attended ClickerExpo, which is a conference all about positive reinforcement training. Most of the people who go are dog trainers. It’s great to go to a conference where dogs are welcome! (I fell in love with this Bull Terrier.) I went to seminars that help me be a more nuanced trainer, and I got to talk, non-stop, with like-minded people. 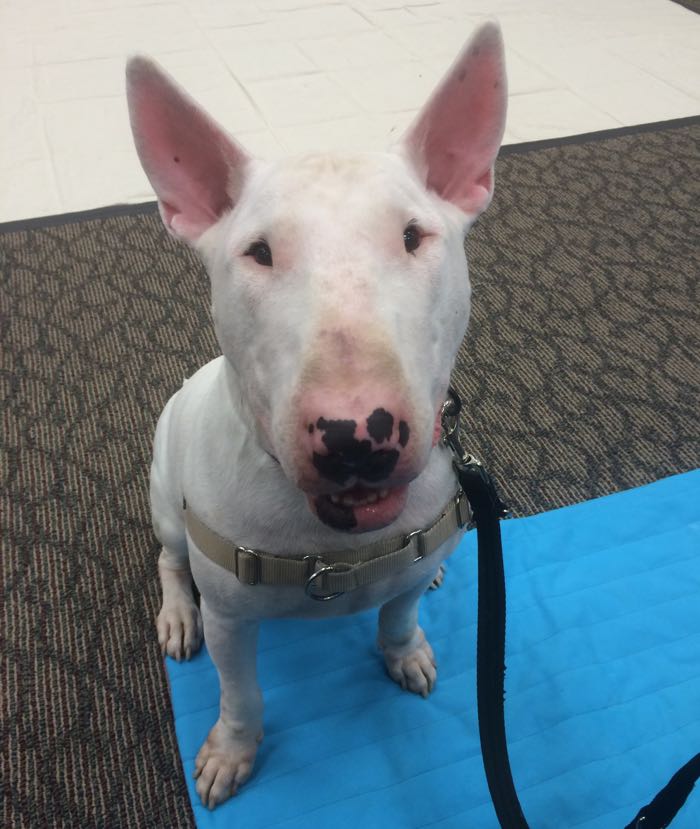 At ClickerExpo, along with the dog people, there were also horse trainers, like me, and zoo keepers, too. One day at lunch I sat next to a man who, for the last 17 years, has cared for penguins at a zoo. What a great conversation that was!

I understand why some people don’t like zoos. It can be upsetting to see wild animals confined in small areas, on concrete and behind bars, in environments that aren’t like what they’d have in the wild. I remember going to the Staten Island Zoo decades ago, on a school field trip. Being near the animals was thrilling, but seeing the conditions, even then as a an uneducated child, was unsettling. On the other hand, there is nothing like being within a few feet of an exotic animal. At a zoo last week, I was transfixed by the flamingos, watching them dip those ridiculous heads, balance on one leg, and simply blink. The difference between in-person viewing and in a book is like the difference between seeing art on a postcard or in a museum. Just like a Jackson Pollack painting might look like a simplistic splatter pattern when viewed on a piece of paper that fits in your hand, when you stand next to a wall-sized canvas, you get it. So, too, a video of manatees isn’t anything like being two feet away from these massive, peaceful creatures as they float and bob up for air 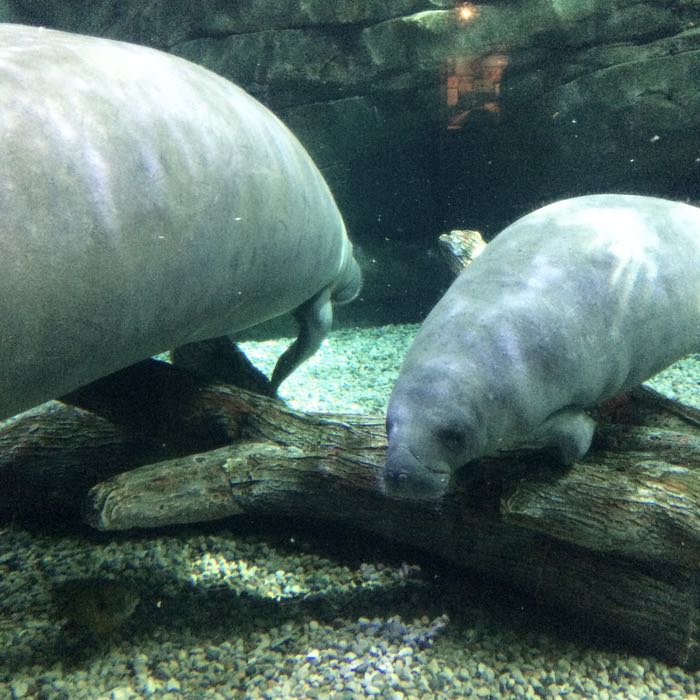 Zoos have gone through, and continue to go through, transformation for the better. Some zoos are making more progress than others. Enclosures are now designed with the animals’ needs in mind. There is enrichment so that their lives are more interesting, and training so that veterinary procedures and handling isn’t stressful. For example, the elephants at the Cincinnati Zoo have been trained to put each foot, in turn, on a platform so that their toes can be trimmed. No longer are whips or tranquilizers used. Zoos are focused on education and on conservation. In some cases, some species would be extinct if it weren’t for the knowledge that they’ve gained studying the animals in the zoos, that has enabled resultant reproductive programs.

The conference was inspiring, but for me the highlight was the pre-conference backstage tour of the Cincinnati Zoo. We watched cheetahs get their exercise and fun by chasing a toy at 40 MPH. Afterwards, this cheetah purred as loudly as a car engine, while licking her handler. This sort of relationship only comes through training, respect, and providing the animal with what it needs to thrive. 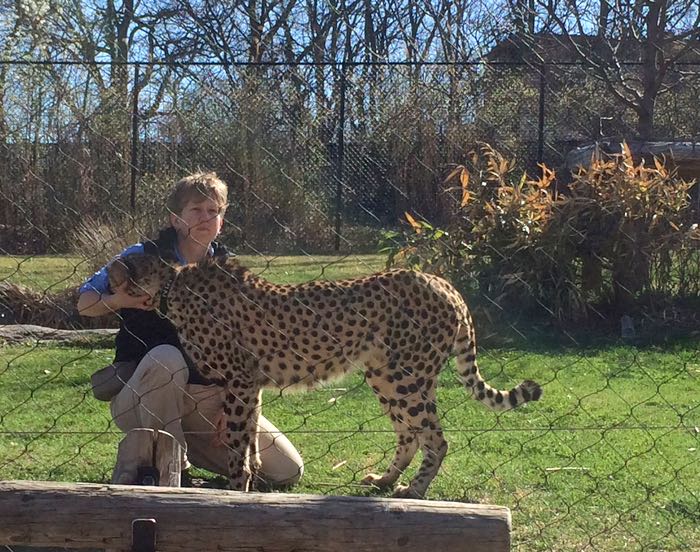 A tortoise was out for a stroll with her keeper. It’s hard to know what a reptile thinks, but the joy of the children who got to pet her shell was obvious. 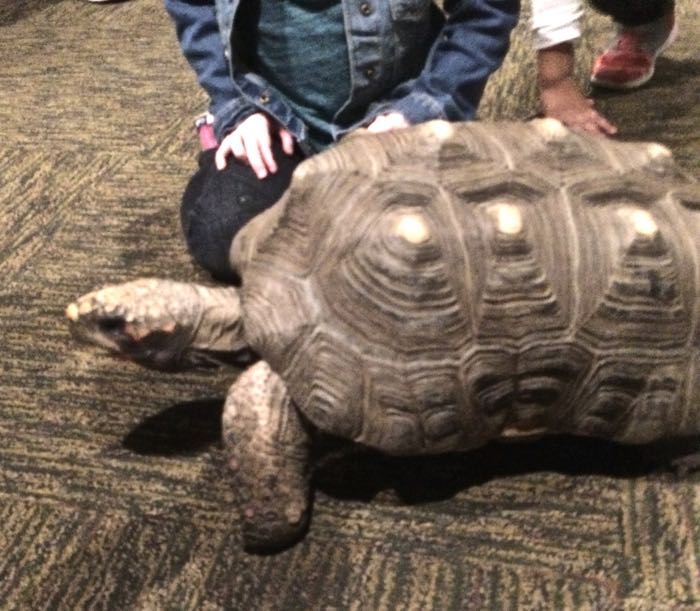 Educating children is part of this zoo’s mission. They have a petting area and a show that entertains while teaching about the animals. Among the stars, there is a trained skunk, a pig, a rabbit, a dog, and goats. The goats have been taught to paint. First they learned how to hold a paint brush in their mouths, and then how to swipe it on a canvas. Being typical picky goats, during the training process, they told their handler in no uncertain terms that they each had to have their own brush. No way would one goat deign to put a brush in his mouth that had been slobbered on by another goat. Others in the audience were surprised to hear that goats are fussy like this. I was not! We got to see a goat paint, and I got to be the easel! At the end of the video, note the click sound – that marks that the goat has done her job and is about to get a cookie.

One of my friends trains rhinos at another zoo. These are massive, dangerous animals, and yet it turns out that they bond with their keepers. She says that the ones that she knows like to being scratched on the folds of the skin on the hind end and will lift their legs to show their favorite place to be itched. She also says that the youngsters will roll over on their backs like dogs for a belly rub. Now that thought makes me happy! 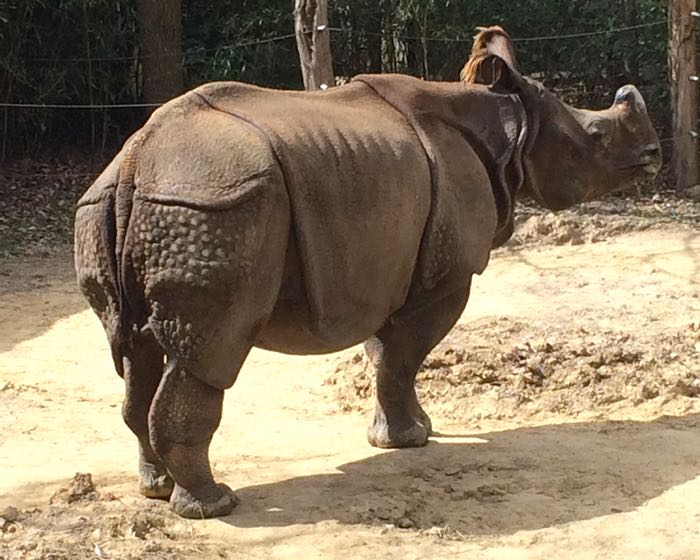 This is the first week of spring. 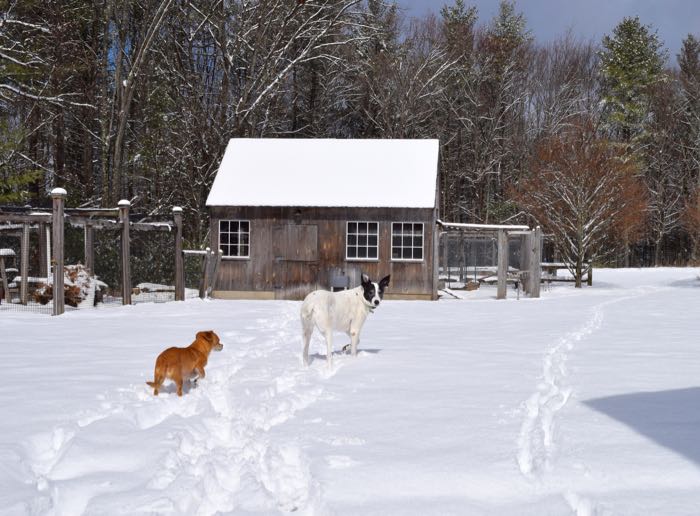 Last night I arrived home from an animal training conference where I had met two women who each had moved their horse farms from this northern clime to Florida. Sure, they don’t get snow but they do have alligators in their ponds. I’ll take snow.

Scooter is determined to bound through it to get to his favorite potty area. 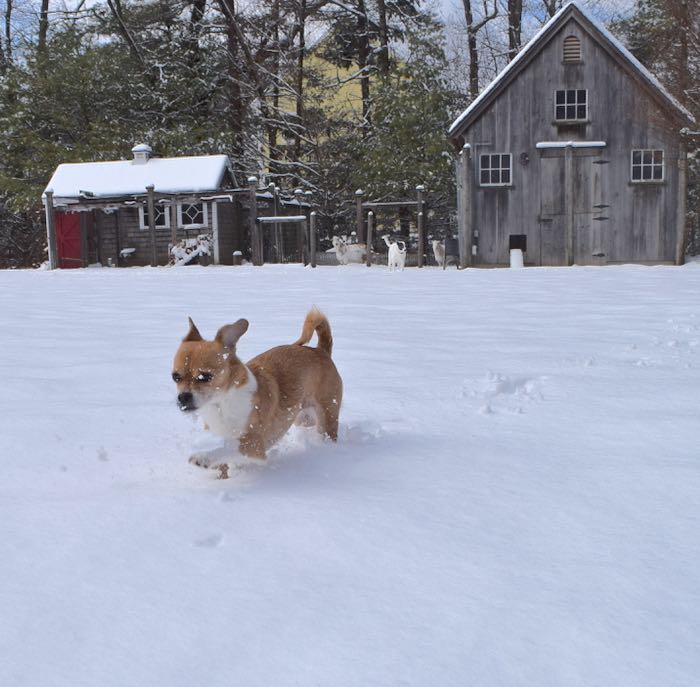 The goats don’t like snow. They’d much rather spend their day standing in their stall than walking around in this sticky wet stuff. So, to get them moving a little, and to make their lives a tad more interesting, I use the skeletons of Christmas trees as hay mangers. Pip and Caper deign to tippy-toe through the snow to get to it. 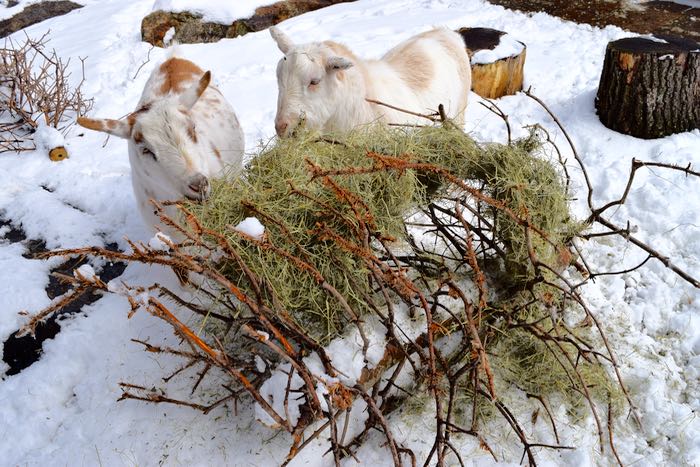 The branches make it more difficult to eat quickly. The Goat Boys are up to the challenge. 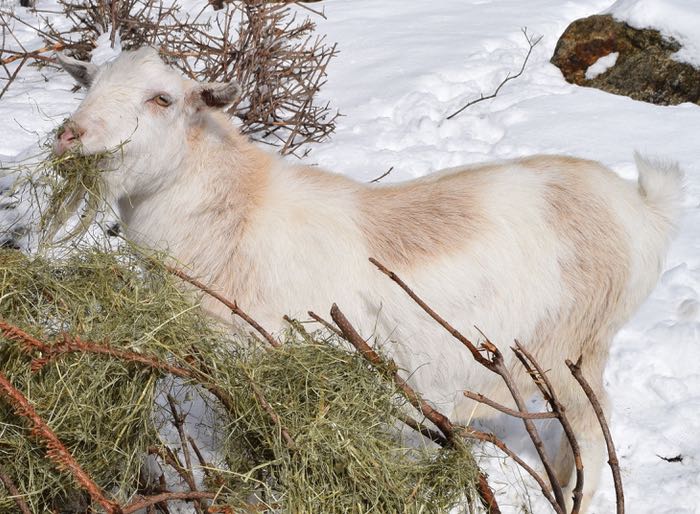 The year after we built this house, in 2004, I planted hundreds of bulbs in the woodland in the front yard, where there’s leaf cover and high shade – perfect for crocus, daffodils and scilia.  A hole had to be dug for each bulb. It was a lot of work but the vision of soft waves of color under the trees kept me going.

Unfortunately, the chipmunks had visions of dinner. Or maybe it was the squirrels. Each little hole was dug up again. Those critters worked as hard as I did!

Somehow, what the chipmunks left were a few white flowers. Perhaps they’re not as yummy? It’s a more subtle show of spring than I’d imagined, but it still makes me happy. 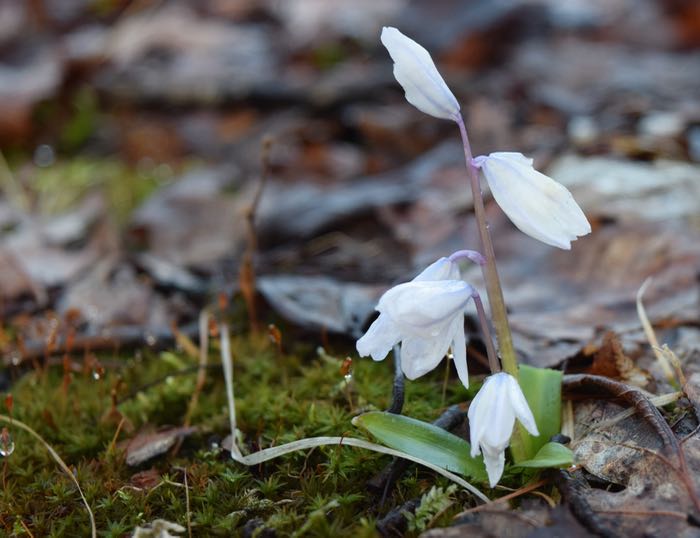 The chipmunks did miss a few of the blue and purple flowers, but I haven’t seen them yet this year. 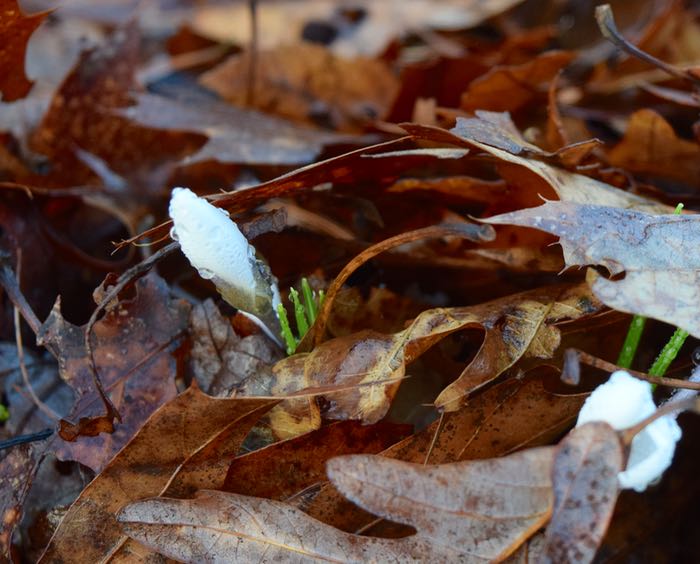 I’m flying out to Ohio today for ClickerExpo, an animal training conference. Tomorrow I’ll get to take a behind the scenes look at the Cincinnati Zoo and learn how they train the cheetahs and elephants. Keep an eye on my Instagram page, where I’ll be posting photos! (I’ll also share on FaceBook.) And keep watching that page, because I have a feeling that when I’m back home next week, that one or two of those elusive purple flowers will have emerged and will be in bloom. I’ll try to get a photo before they hide away again.