I’m a writer. I believe that the words that I choose to use – and not use – matter. As someone who has had her manuscripts marked up with red ink by editors, I know that the words that I have in my head, when put down on paper, aren’t always as clear as I intended. Words convey emotions as well as facts. I once tussled with a copy editor who wanted to make my recipes sound more authoritative with words like must and have to. I was able to keep my friendlier tone. I’ve also had an editor immensely improve my writing by changing one word in an opening sentence. I respect the craft of writing and work hard at it.

Now that I’m writing about animals, training and relationships, the meanings of words are even more fraught by interpretation because of the intense emotional connection that we have to our animals. All of us who ride horses want to believe that we’re doing right by them. But built into working with these large and potentially dangerous creatures is the potential for abuse. We use bits and saddles, ropes and halters. 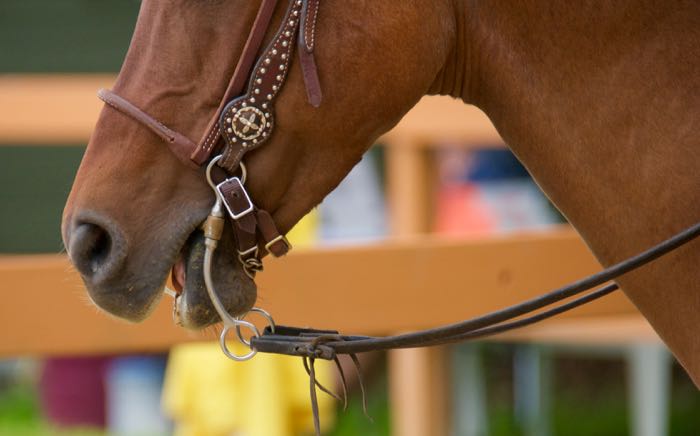 Horses are kept in stables, taken places away from their herd, and asked (hopefully asked and not coerced) to do things that they wouldn’t normally do as a grazing animal of the plains. We can form a bond, communicate clearly, and train so that the activities we do are mutually rewarding. Or we can punish and force our way to our goals.

Traditional training has been all about dominance. Whips and spurs. 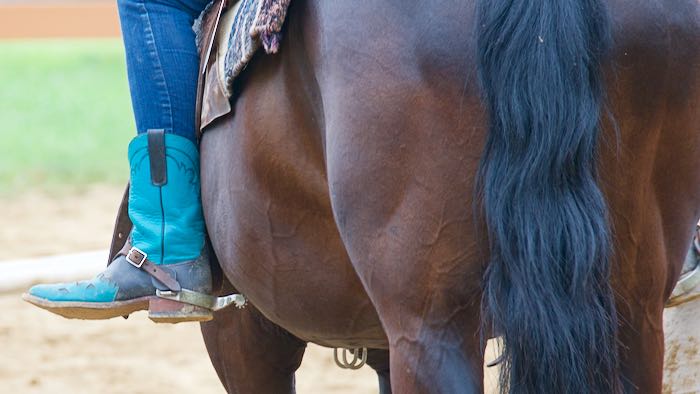 Restraint and fear. It’s still going on. There are thousands of YouTube videos (and clinicians who have wide audiences and pack arenas) who use these techniques. Turn off the volume and you see horses been chased into submission. Turn on the sound and you hear words making excuses for the training. Words like leadership, respect, talking like a horse and hooking up. At the end of these videos you see pliant horses doing amazing things – jumping through rings of fire without a bridle! Trotting with a head in a perfect arc with the rider seemingly doing nothing! Watch the training, not the end results, and see if you can write the script in a positive way. I can’t.

The word reinforce sounds so positive. A bridge is reinforced to make it stronger. Troops are sent in to reinforce an army’s position. When a rider tries to get her horse to move forward with the squeeze of her legs, and nothing happens, the instructor says “reinforce that with the whip.”

In a recent issue of the United States Dressage Federation’s magazine, an article about using the leg states, “If the horse is not responsive to the leg aids, you can use the whip and the spur to reinforce the leg. These artificial aids must be used correctly and conscientiously so as to encourage the horse forward rather than punishing him for being unresponsive.” (Oct. 2015, page 31)

There are many positive words in this advice. Correct. Conscientious. Encourage. It explicitly states that you’re not punishing.

But what is the author really telling you to do? Look at it from a behavioral science point of view. You are cueing the horse to go forward with a squeeze of your calves. If the horse doesn’t respond to that cue, you put the sharp tip of your spurs against his sides and tap with the whip. If he still doesn’t move forward, you press and hit harder. Behavioral science tells us that actions can do one of two things: stop a behavior or make it more likely to occur again. A behavior is stopped using punishment. Spurs and whips are not rewarding anything, rather they punish the laggard movement. Let’s say that you hit the horse because she didn’t move forward from your leg pressure. The whip made her unenergetic stride stop – but that doesn’t mean that you taught the horse to move with energy. Sometimes whipped horses stand still, or buck, or rear. If the horse does move forward, then the spurring and hitting ceases. This relief from the rider’s actions is rewarding, but it’s essential to recognize that to reward in this way, one had to initially apply an aversive. By saying that a whip encourages the horse ignores that fundamental first step of punishment.

Scientists try to eliminate the many interpretations of words by codifying terminology with clear definitions. Unfortunately, for trainers who want to use science to underpin what we do, the words behavioral scientists use carry far too much emotional content. For example, there is “positive punishment” and “negative punishment.” In these two terms, positive and negative are simply words from math – you add something (positive) or you take it away (negative.) However, even if you know you’re not supposed to think that positive punishment is a warm and fuzzy way to punish your animal, you can’t help but see the word “positive” as something good.

Riding is not black and white. Good or bad. I liken it to ballroom dancing. When I dance, my partner has his hand at the small of my back. A slight firmer touch directs where I go, even such nuances as angle and lift can be cued by a minute change in the position of that hand. Dancing with a compatible partner is magical. Dancing with someone who shoves me around and isn’t in tune to my body language is a miserable experience. When I ride my horse, my position, my weight, how and where I press with my legs, and how I hold the reins, all can communicate as subtly as a dance partner’s hand. In riding, like dancing, body language can quickly change to pressure that the horse wants to avoid, and to outright punishment if it hurts. Add whips and spurs, draw reins and harsh bits, and the potential for serious abuse is compounded. Most riding disciplines are based on the premise that you use some sort of pressure to get the horse to do what you want, and that you reward that behavior by alleviating the pressure. I want to understand what I’m doing as honestly as possible. Words can hinder and excuse what is actually happening, but they can also clarify. Is a moment of riding pressure and release, pressure and relief, pressure and reward, punishment and reward, or as a behaviorist might say, positive punishment or negative reinforcement?

I don’t think that, when on the back of a horse, one can (or should) eliminate all potentially aversive actions, but the vast majority of the time, I want it to be positive for both of us – in the lay person’s understanding of those words. Positive: optimism, agreement, affirmation, confidence. Reinforce: strengthen, support. Reward: fair return, recognition, gift, appreciation.

I’m firmly behind what behavioral scientists have brought to the understanding of animal behavior and I am committed to using this science as an underpinning for how I work with my animals (and in fact, relate to the world.) However, I want to use words that are clearer and more effective in communicating the message than what these scientists are restricted to because of the protocols of their field. So, as I continue to discuss these topics, understand that I am not using the terms as defined by scientists, but that I am using principles that they’ve worked so hard to discover.

This all brings us to the question: When you want the horse to go forward, how do you do that without using that whip (or a kick and spurs)? I’ve been working on this in my lessons with Kim Litwinczak. She’s a Grand Prix dressage rider, steeped in traditional methods – and very successful. (This week Kim is showing at the USDF Finals in Kentucky.) I’m so fortunate that she’s willing to try out my ideas. We’re using a clicker and food rewards to teach Tonka to do dressage. I’m still using traditional aids – done right they convey information between both parties in a way that is immediate, subtle, and complex. Kim not only helps me learn how to execute those aids, but on the ground she’s able to watch for the perfect stride and is marking that with the clicker at the exact moment that it happens. This knowledge and precision is essential when doing dressage. Tonka appreciates the immediate feedback and clarity – and the cookies that he gets for those marked behaviors. We started by training a square halt and we are now clicking for an energetic working trot. Both Tonka and Kim are engaged and happy with this method. It’s very exciting, and I’ll be sharing what we’re doing in future posts. 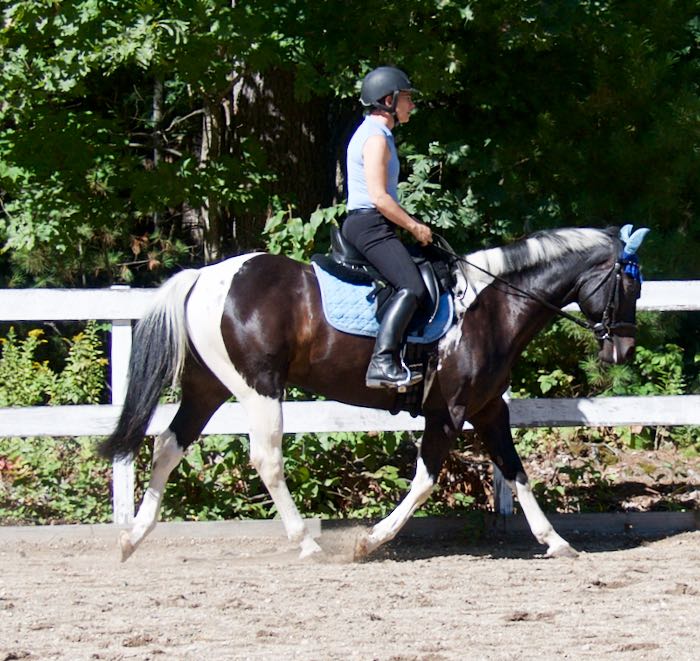 But for now, here is a video of how we taught Tonka to do a square halt. What I love about this is that once he understands what the behavior that I’m asking for is, he takes ownership of it, and I no longer have to micromanage where he puts his feet. (Please note that for this video I didn’t have a treat bag and the cookies were stuck in the small pocket of my breeches. I’ve since purchased a pouch that doesn’t bang when I trot and treat delivery is much quicker!) Do notice the relaxed attitude and the seemingly conflict-free training.