There are some gardening tasks that I can’t do. When we built this house a dozen years ago, we planted a screen of bushes and tress to hide the view of the neighbor’s large yellow house and lawn. It was designed to look natural, but it still requires occasional pruning. I don’t go up ladders, but I know the best people who do. I’ve been using the crew at Rudy’s Tree for twenty years. 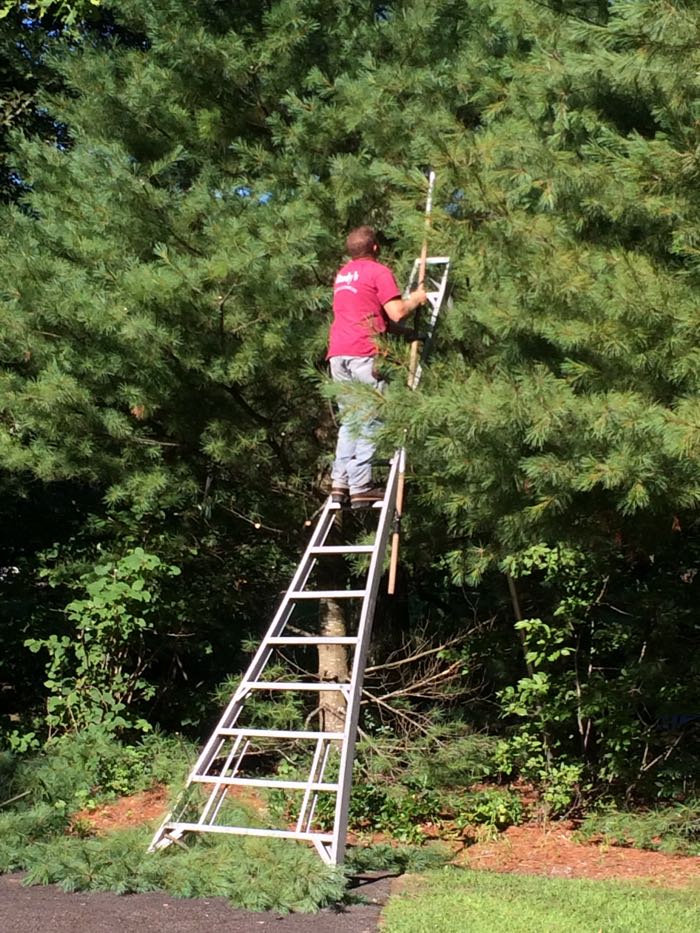 I asked them to give some of the branches to the goats.

I’ve got a huge stand of rhododendron in the front woodland. It’s a gorgeous plant that must be over seventy years old. The guys were trimming it, too. They know and love my animals, and decided to give them some rhodie branches because they know that deer like it, and thought it’d be a treat for the goats. It was my total fail that I didn’t tell them to not feed it. Rhododendron is toxic to goats. An hour or so after the crew left, I saw the rhodie branches in the goats’ enclosure. I tossed them into the woods. I wasn’t worried. The goats have walked by these plants numerous times and never nibbled at them. The guys had given the goats plants that are tasty and that they gorge on, like pine and birch. I didn’t think that the boys would bother with the rhododendron. That evening, Pip looked a bit off his hay, but I still wasn’t worried.

What I didn’t know that this plant doesn’t just cause stomach upset. It kills.

Steve opened up the barns the next morning at 7. He came and got me. Pip was vomiting. It was green. He was foaming at the mouth. I still didn’t know enough to be in a panic. He’s eaten things before that have upset his stomach. However, even bloat that doesn’t cause vomiting is serious, and I immediately drenched him with pepto-bismol, and then did an additional drench of epsom salts. This is done using an oral syringe. It’s messy, but effective.

I called my vet, Dr. Sarah, who has cared for these goats since they were two months old. What she said did send me into a panic. There’s nothing that I can do. The plant is toxic. If we’re lucky, he vomited out the worst of it, but it’s been in Pip’s system for 12 hours. His body has already digested and absorbed the toxin. You’ll know if he’s going to die by tomorrow.

It looked dire. Pip was lying down. He was not chewing his cud. His mouth was swollen. One ear dipped down, as if he was having a stroke. As always, though, the two brothers were together. 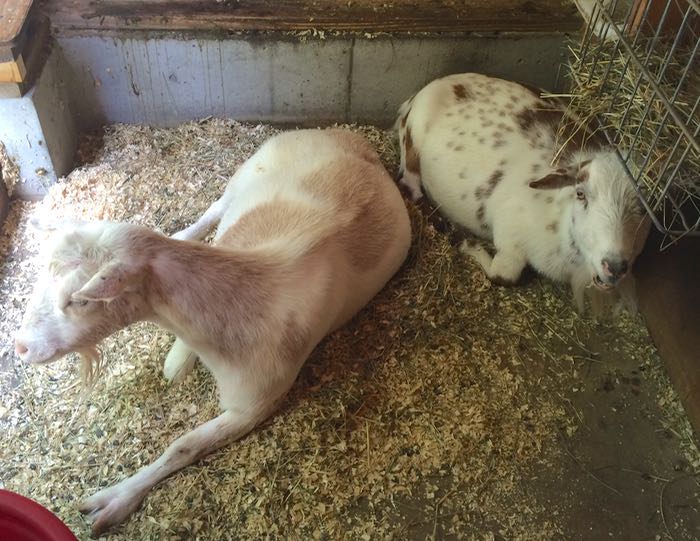 There was nothing that I could do about the toxin, but I could keep Pip as healthy as possible so that his body could fight back. For goats, that means keeping food in the belly and the rumen working. When the rumen shuts down, the goat dies. I hand-fed mint. He nibbled a leaf and stopped. I tried a peanut. He chewed and it fell out of his mouth. I thought that I was watching my goat die. I massaged his belly.

I put out hay and baking soda. Baking soda is very good for a goat’s digestive tract. They actually know to eat it when they have an upset. At first Pip was too miserable to touch either, but mid-morning I saw him lick some of the baking soda. It gave me a glimmer of hope.

As you can see in the photo, Pip’s eyes are half-shut in pain. Caper remains by his side. 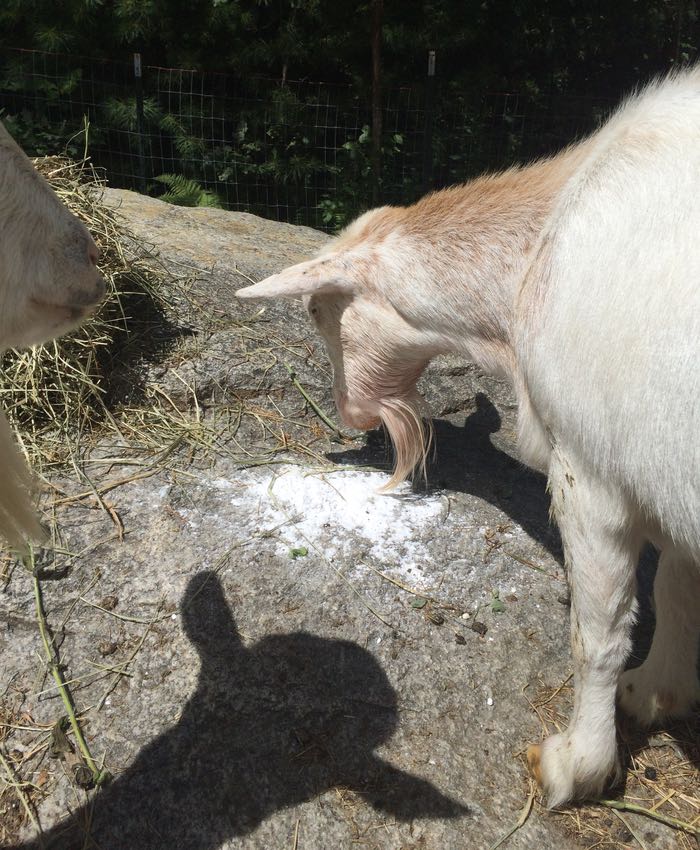 Using Caper as a lure, I got Pip up. I let them eat things that they’re never allowed to eat, like the raspberries. Pip could not resist. 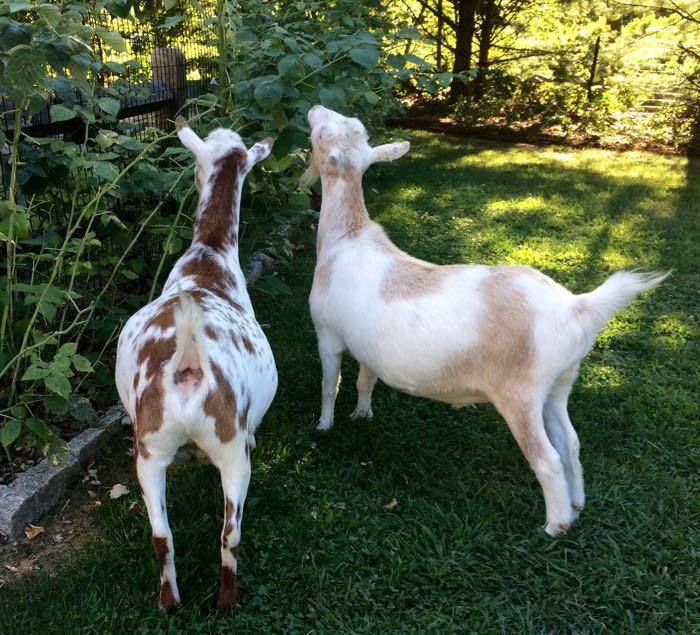 After a rest, I lured him back out to the strawberries. Even a goat with pink pepto-bismol in his beard, and pain in his gut, will eat strawberry plants. Caper could not believe his good fortune. 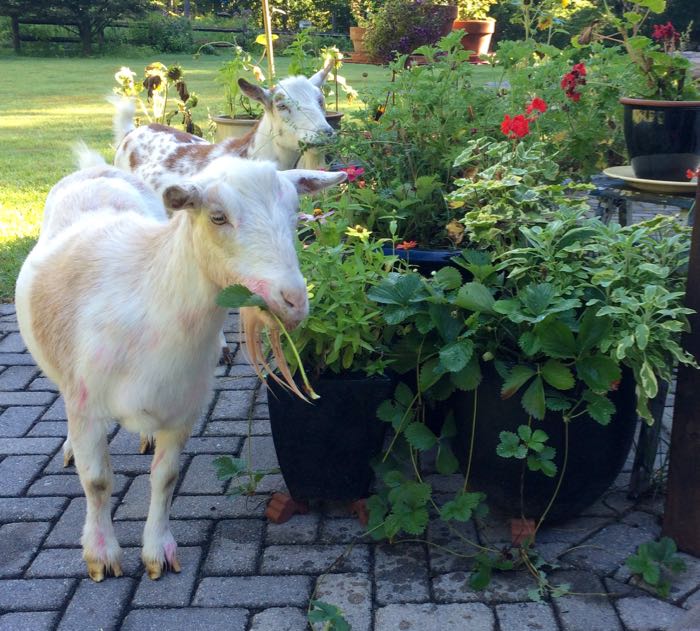 In between the eating, Pip would lay down in the sun and look miserable. I rubbed his belly some more. 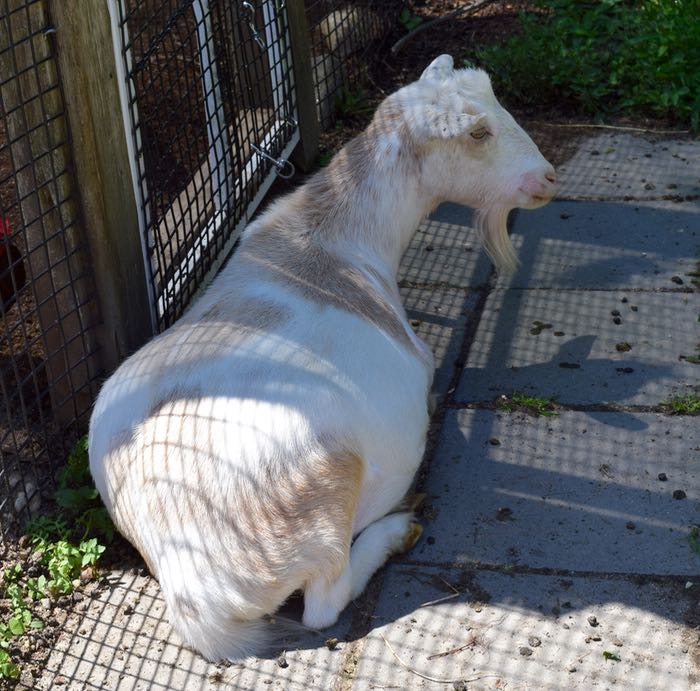 Finally, in the late afternoon, I saw Pip chewing his cud. That was a sign that the digestive tract was working. Pip even head butted his brother out of the way when I handed over a peanut.

I avoided googling frothy bloat (which is what this is called) all day. I trust Dr. Sarah, and I didn’t want to see all sorts of “remedies” to subject Pip to. If he was going to live, it was going to be because of sheer luck that he didn’t ingest enough toxin to kill him. But now that he was looking on the mend, there were things to do to hasten his recovery. I did an internet search and set off for the pharmacy.

The tree guys were still on the property. They were as worried as I was. While I was gone, they massaged Pip’s belly and encouraged him to walk around. (I found this out later, and have no doubt that the TLC from Pip’s friends was an essential component of why Pip pulled through.)

I created a magic goat elixir. Activated charcoal and

(to detoxify the system), mineral oil (to whish out anything bad remaining in the nooks and crannies of the goat’s gut), dried ginger (to settle the stomach), pepto-bismol to soothe, and water to hydrate a goat who hadn’t had anything to drink all day. By now, Steve was home from work. He held Pip and I dosed with the oral syringe. It wasn’t difficult. Pip said that it was tasty, and that the water was fine. He smacked his lips.

Still, the toxins might have been working silently. Were they going to kill him overnight? I woke at 5 and went out to the barn in my pjs. Pip was chewing his cud. Where’s my breakfast? he asked.

A day later, and I’m sure that Pip is fully recovered. 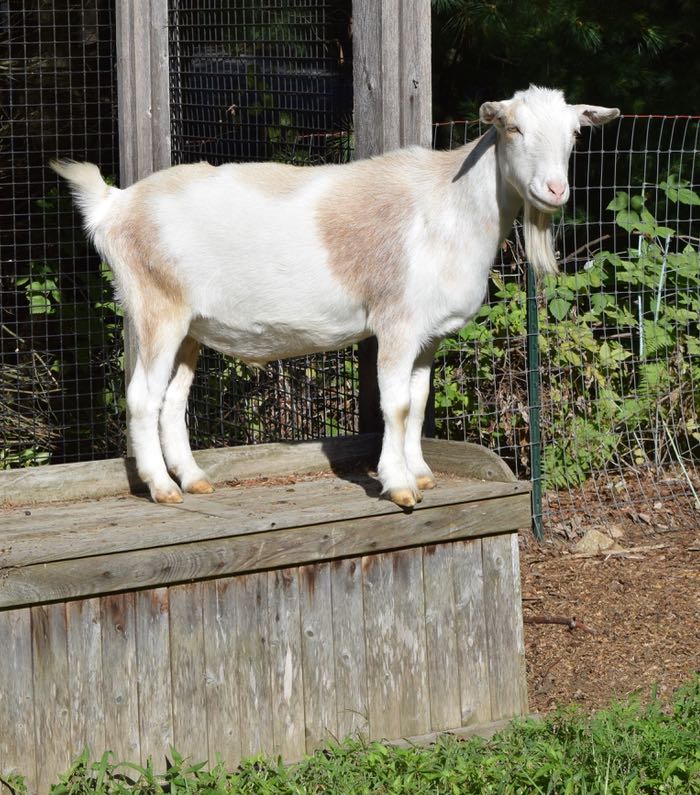 He’s wondering why the raspberry plants are again off-limits.