Having graduated from the KPA-TP course, I’ve decided to get back into being a professional trainer, and part of that plan is to have Tonka assist me. He is a young horse (9 years old) but sane and careful. He’s also one of those unique individuals who’s very presence calms down other horses. Tonka and I will be teaching others how to enjoy getting out of the riding ring and onto the trails. For horses who have always been restricted to a flat surface and told where to place their feet, a path through the woods can be scary. This is true for the riders, too! We’ll be there to guide and reassure.

Tonka and I haven’t gotten out for months. My trailer was under several feet of snow. The paths were too deep and too icy. But, before we can teach others, (our students include two retired Grand Prix dressage horses and a young horse who’s never been outside of a ring) we have to get the miles under us. I also need to scout out the best places to take my clients.

Yesterday we went to Hazel Grove, where there’s a big grassy riding field to stretch out in, and flat trails through the woods to walk down. 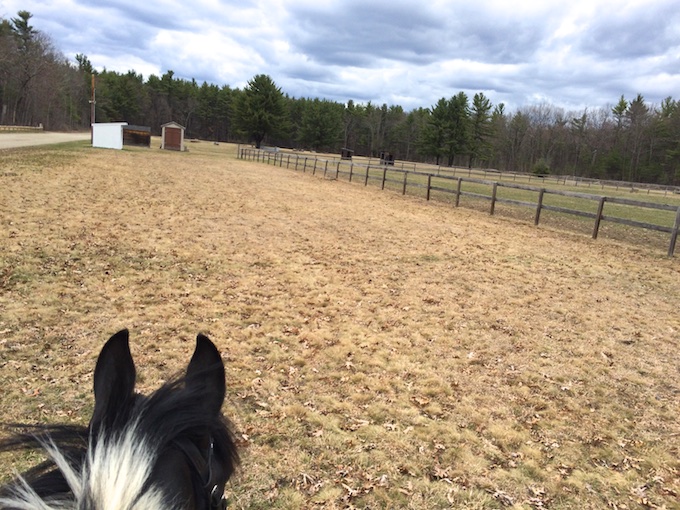 Even for a horse like Tonka, it’s asking a lot to leave his friends from the barn and to go out alone. Horses are herd animals, and can be insecure and scared when away from other horses. Tonka has to put his trust in me. We are a herd of two. A frightened horse can be dangerous. A horse’s first reaction to something that startles him is to flee and then look. I’d rather that Tonka not bolt off, but wait and ask me if everything is okay. There are different ways to train this. One method teaches the horse to be compliant. It doesn’t matter what happens, he behaves the same way, regardless of what is going on around him. This is taught by shutting down the horse’s natural flight reaction. In the science of behavior, it is called learned helplessness. This can feel safe to the rider, but to achieve this state requires training with punishment, which I don’t do. Besides, it’s not what I want. I want a cooperative horse, one that is calm because he’s thought through the situation and knows that he can handle it, one that trusts that communicating with me will be worthwhile and rewarding. I want an engaged partner. This takes time and skill, and it also takes listening to one’s horse. It paid off yesterday in an unusual way! 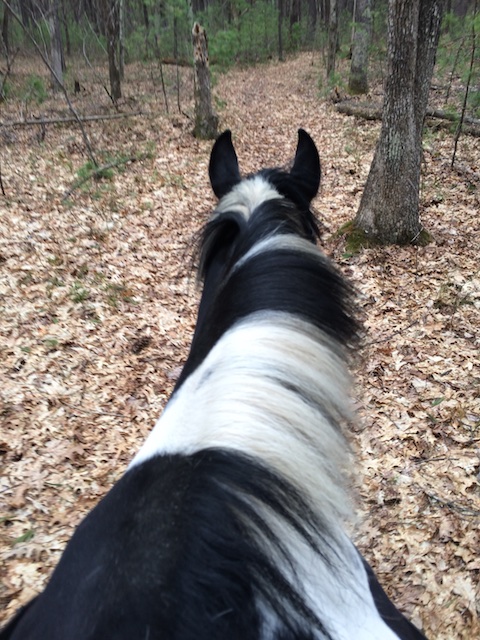 We were the only ones at Hazel Grove when we arrived at 10:30 am. Tonka and I warmed up in the field. He was a bit “high” which means he was on alert. There was tension in the way he moved, but we talked it over (my deep, calm breathing relaxed him) and I let him look around. He settled. So, we headed down the trail. About 400 feet into the woods we came across a tree blocking the way. I was riding “on the buckle” which means that the reins were loose. We stopped and I looked about to try to figure out how to get around the obstacle. A worried horse would have jigged or tried to wheel around to get back to the safety of the trailer. A compliant horse would have stood there like a statue. My cooperative horse put his head down and snuffled in the leaves. What the heck was he doing? There wasn’t any grass there for him to eat. He was clearly telling me that there was something on the ground that I should pay attention to. I looked. There was a small black leather purse. I got down and picked it up. Someone had lost their cell phone. I’ve known dogs who find things, but a horse? This is what happens when you allow a horse to be curious and to talk with you.

There was no convenient stump to use as a mounting block, so we walked the short way back to the trailering area. (I can get on without a stump, but it’s kinder on his back if I use one.) Tonka raised his head to alert me to something going on up ahead. Sure enough, things had changed. Two trailers had pulled up. I hoped that someone had arrived who was connected with the group that manages Hazel Grove. I could give them the phone to return. I asked a woman. She said, no, she’d just driven up from Rhode Island, which is two hours away. I said I’d found a phone. That’s mine! Her excitement was the first thing to rattle Tonka all morning. She had been to Hazel Grove the day before to do a 16 mile ride. She had no idea where she’d dropped her phone purse. So, she and a friend had returned with two horses, assuming they’d have to ride the full trail again, in the vain hope of finding the phone in the leaves. What a coincidence that we were there at the same time! If not for Tonka’s curiosity and communication, it would have remained lost. Tonka has a new fan.

We said our good-byes, and returned to the trail. Not many horses would have willingly left the company of other horses to go back into the woods. There wasn’t anything else to find and we had a pleasant, uneventful walk. Good boy, Tonka! 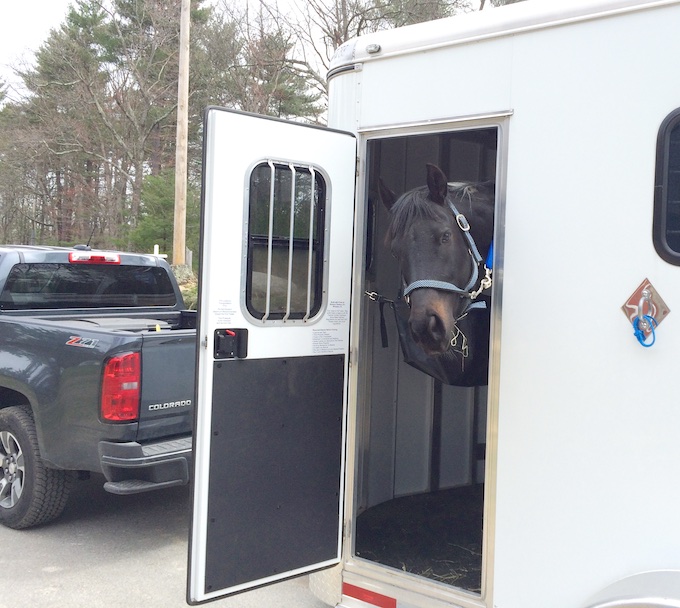