Tonka was born in Dripping Springs, Texas on February 11, 2006. His sire was a black and white paint stud, named Last Chance Investment, who was known locally as quite a good roping horse. Tonka’s dam was also a black and white paint. Her name was Moon King Bea. As far as I know, for his first four years he was pretty much left alone by people. He lived in a large group of horses, likely with his aunties and cousins. He learned how to read horse body language from the mamas who kept him in line. He was outside 24/7, able to graze all day and during the night, too (horses wander and graze at all hours.) That made him strong and kept him sane – horses are designed to forage, not stand in one place and eat only a few times a day. Tonka and the other youngsters played games, which is essential if you want a horse to know how to relate to others. Animal ethologists and behaviorists have recently learned that play isn’t about asserting dominance or even, among predators, all about learning to hunt. Rather, it’s about cementing social relationships, and it’s important for brain development. For horses, who are amenable herd animals, and who must get along with others in order to survive, play is not frivolous time. It’s necessary.

Tonka was lucky to grow up in a herd. Socializing with other youngsters and aunties is more essential than constantly being handled by people. In fact, foals that are kept stalled and separated from the group often have behavioral issues. When Tonka was four, he was purchased by a kind rider, who taught him gently about saddles and life with people. She brought him up to Maine, and although she loved him, could no longer own him. When I first met Tonka, it was clear to me that this was a horse with a sound mind. It’s why I bought him. The fact that he is handsome is icing on the cake.

Back there in Texas, in his herd, Tonka learned how to gallop, to watch his footing, and to take care of himself. And so, when I ride him out on the trails, I respect what he has to say. Some people teach their horses to be compliant – to always and only do exactly what is asked of them. You see this with horses trained in “natural horsemanship” in which they are chased around until they give up and either do as told, or do nothing. I don’t want that relationship with Tonka. I want a cooperative horse. I want a dialog. Here’s an example. Last summer I was riding Tonka on a trail in the woods. We were walking along when he stopped dead in his tracks. If I had a compliant horse, I would have told him to go on, and he would have. But, I have a cooperative horse, one who trusts that if there is an issue, that I’ll weigh it with him. I looked to see what he was alerting me to. A yellow jacket (a very nasty wasp) zipped past. It’s uncommon to see them in the trees. Tonka took a moment to cautiously look for a ground nest. There wasn’t one in our way. We continued on. I was grateful not only for his caution, but also that we were able to communicate about what we both knew about the trail. This is not to say that I let him do what he wants. I do assert my right to be in charge of the decisions. He’s learned that if we disagree about something that worries him, (for example, he has a fear of wild rabbits) that if I insist that we go on, that nothing bad will happen. Trust is built, not forced. 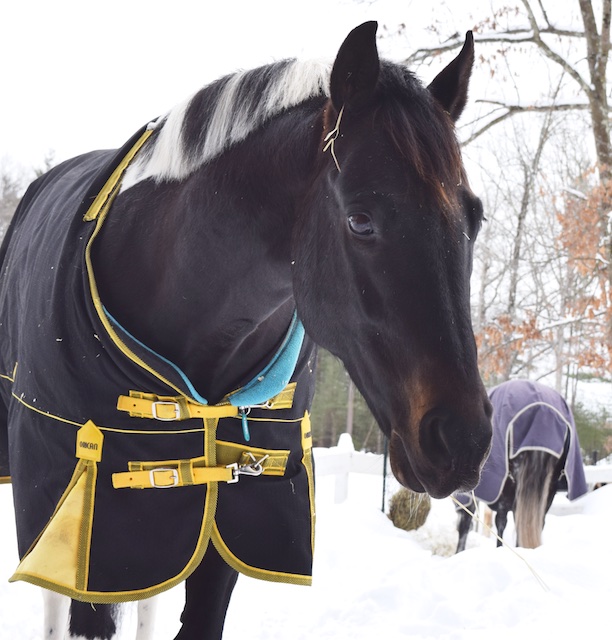 Today Tonka turns nine. A horse reaches his prime in his teens. With luck and good care a horse can be ridden into their late twenties. Here’s to a lot of good years, Tonka! 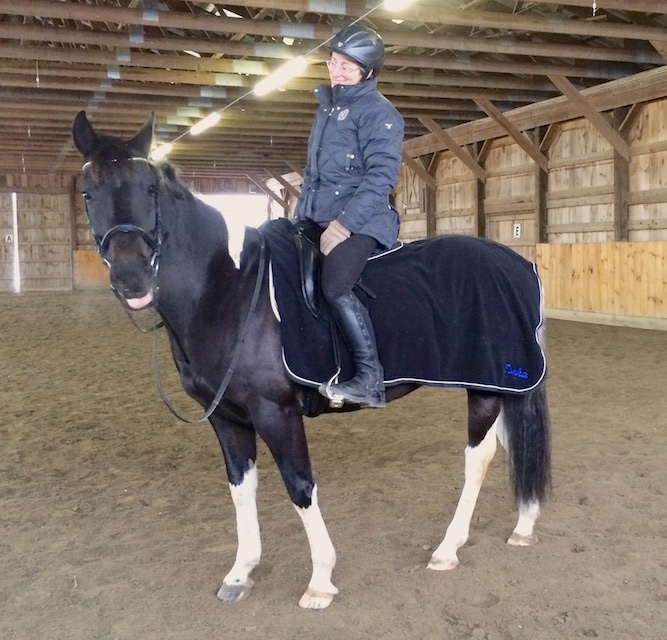 (That’s his I just had a peppermint candy face.)