Just over eight years ago I decided that my good farm dog Lily needed a buddy. She was working hard, chasing foxes, coyotes and neighbor’s dogs off of the property. Because her job was to keep these canines away, it wasn’t easy for her to make friends. How was she to know who was a threat and who wasn’t? Lily didn’t take a break during her day. Even when napping, she would listen for hawks in the sky. I thought that Lily looked stressed. She needed a light-hearted playmate. It was time to get another dog.

I knew that it was going to be hard to integrate a second dog into the household, so I looked for one with the right temperament and history. I found an 8-week old puppy that was in loving foster care, with a big dog and teenagers in the house. He was happy and unfazed by what was going on around him, and friendly to us.

In the last eight years, Scooter has earned his keep as Lily’s sidekick. He’s Robin to her Batman. When she gets too serious, he pesters her to play. He keeps her company on her watch. Sometimes his nap vibes are so powerful that even Lily relaxes. 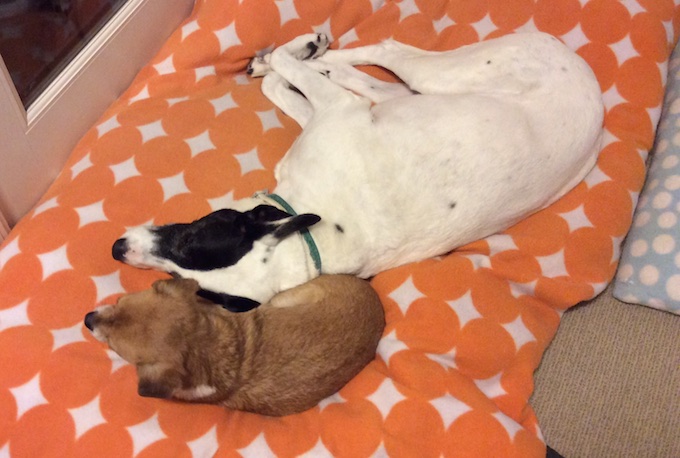 Scooter was born perfect. Potty training was easy. I didn’t bother with any formal lessons. I didn’t have to.

But last year, that changed. I enrolled in the KPA Professional Trainer’s course. This is a six-month program that teaches how to train animals with positive reinforcement (a system sometimes called clicker training.) Part of the curriculum entails doing exercises with a dog that has never been trained with this method. Luckily, I had one right in the house – Scooter.

When I started training him, he was seven years old. Yes, you can certainly teach an old dog new tricks! Before we began, he didn’t do much more than turn his head if you said his name, and even then, he rarely looked for eye contact with humans. Rather, being a little guy (only eleven pounds) and close to the floor, he paid attention to our feet. Unlike other dogs who make connections – the jingling of keys means a car ride is imminent – Scooter went through his days oblivious. For example, he has never connected the leash with going for walks (which, by the way, he loves.)

Despite being a dog of little brain (and I do say that with love), I knew that he could do the coursework. Positive reinforcement isn’t useful just for smart animals (it’s what’s used to train dolphins.) A clam can be trained to open it’s shell with this technique. Surely, I could train Scooter. For the final evaluation, Scooter had to be able to do ten behaviors on cue, with no breaks in-between. The criteria for these behaviors are exacting. The cues had to vary, some auditory, some gestures, some the presentation of a prop. The response to the cue had to be immediate and the behavior precise. You can’t just say, “My dog will stand on a book.” You have to say with which feet. Does your dog sit? Well, is that for 2 seconds or until released? I’m spoiled with dog training. Lily is a genius. She has a whole repertoire of tricks that I’ve taught her just because I could, and it was fun and easy. Lily watched the training sessions that I did with Scooter. You could almost see her roll her eyes. I trained Scooter to whack a tile with his right paw. Progress was slow. In frustration one day, Lily got up from her place (where I’d asked her to wait – she is a well-trained dog) and she thwacked the tile as if to say, Dim wit! This is what she wants you to do!

Training is simply a way to communicate with animals. Be consistent, clear, tactful and rewarding, and the being you’re working with engages with you. Even Scooter. Soon, instead of a dog that looked at my toes, he was gazing into my face. And he was asking for more training sessions. 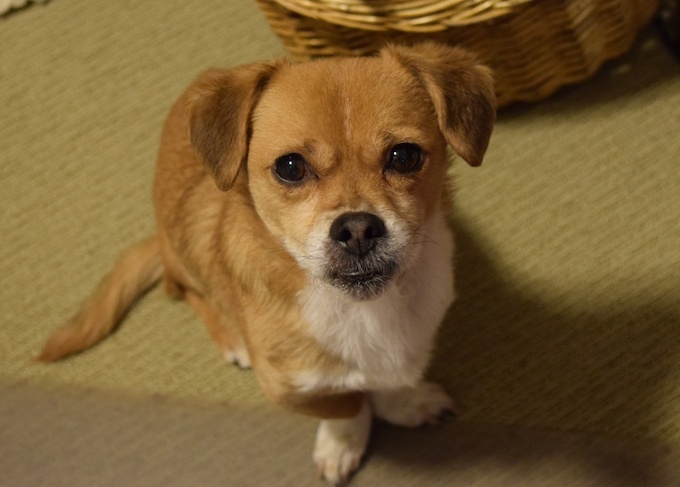 In between all of that work, Scooter kept to his usual schedule, which entailed sleeping in, and many naps. 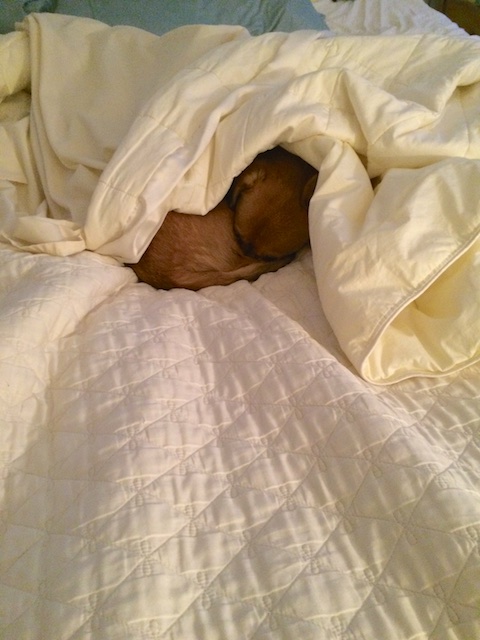 The final exam was last week. We drove to a dog training facility, which was a stressful place for Scooter. There were smells and weird surfaces to walk on. Dogs he didn’t know, barking. Lily didn’t come. It was Robin, all on his own.

Scooter did his behavior chain flawlessly. He was quite proud of himself. Here he is right after, back in his safe crate, where, after he let me know that he is a genius dog after all, he promptly curled up and fell asleep. 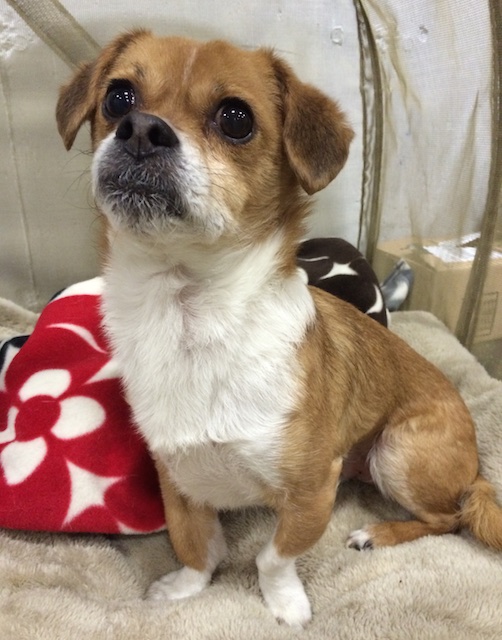 I don’t have a video of the final, but here is one taken about a week before. (Note that the paw whack there is with his left paw. I retrained that for a consistent right paw touch. Scooter learned that in 3 days.)

I am taking my certification and training skills into the horse world, where there is much need of kindness, and of training based on science and ethology. If you want to understand why your horse does what he does, if you want a cooperative horse that eagerly engages in training and enjoys his work, I’d be happy to help. I’m available for email, Skype, or in-person consultations.