Even when winter brings a deep freeze, most chickens will do fine. They have upwards of 10,000 feathers. The downy ones provide insulation and the harder, tighter outer feathers provide protection from wind, rain and snow. As long as the hens have shelter that is dry and draft free, they’ll be plenty warm. You might be worry about those areas not covered by feathers. There’s a risk, but with proper management, it’s not big. Although there’s no insulation in these chicken feet, and yet Twiggy and the other hens are able to walk on the frozen ground. 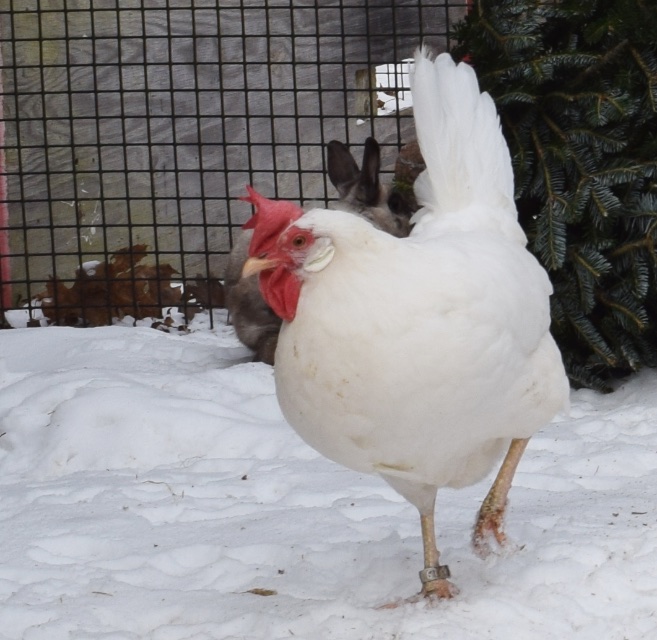 According to the Cornell Lab of Ornithology, birds rarely get frostbite in their feet. This is because there is very little fluid in the cells of their legs to freeze, and because their blood circulates so fast back into warmer parts of the body that what is there doesn’t have time to freeze. They don’t need insulating feathers on their feet to stay warm. In fact, I think that my Cochin, Pearl, has the coldest feet of the lot because her feathers get muddy and then icy. She also doesn’t have those protective hard outer feathers. It’s important to have dry housing for Cochins. 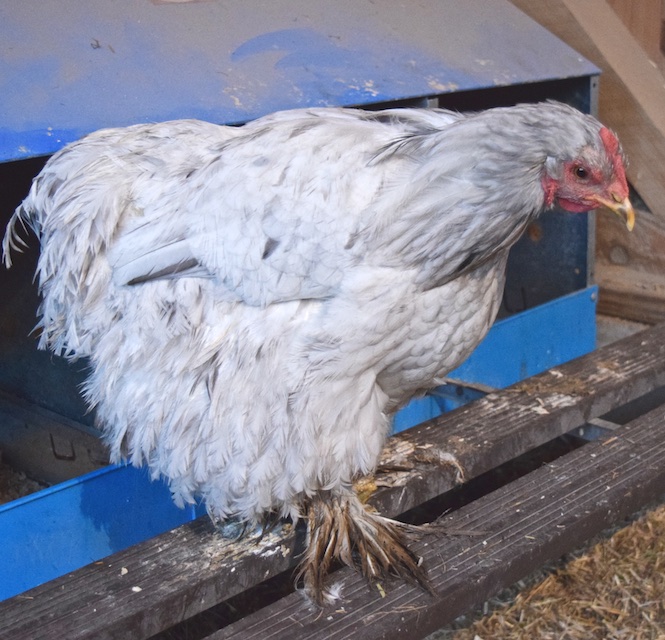 That said, chickens forced to stand on ice all day will get frostbite in their toes. Your hens must spend most of their winter days on dry bedding and on roosts. Given the right options, they’ll keep themselves safe.

Combs are susceptible to frostbite. Chickens like Wyandottes, with their close to the head rose combs are called winter hardy because they have a low risk of damage. Onyx, the Barnevelder, has a small comb that poses no risk of frostbite. 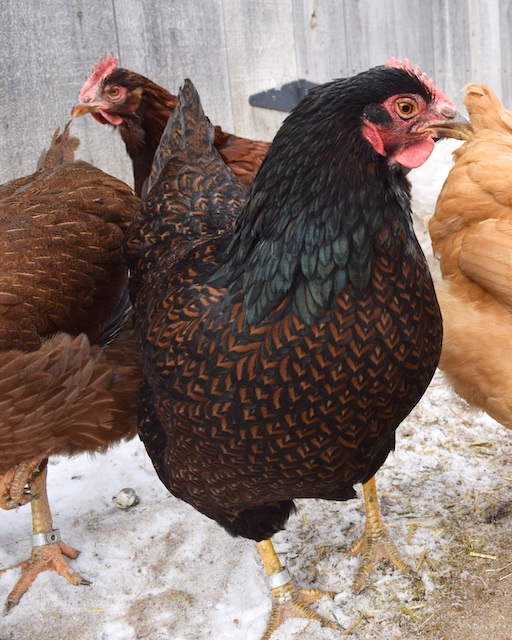 Other hens in my flock, despite larger combs, also weather the weather fine. Their combs go grey and shrink a bit, but this is not frostbite. Misty’s comb is bright red and floppy in the summer, but this is what it looks like now. 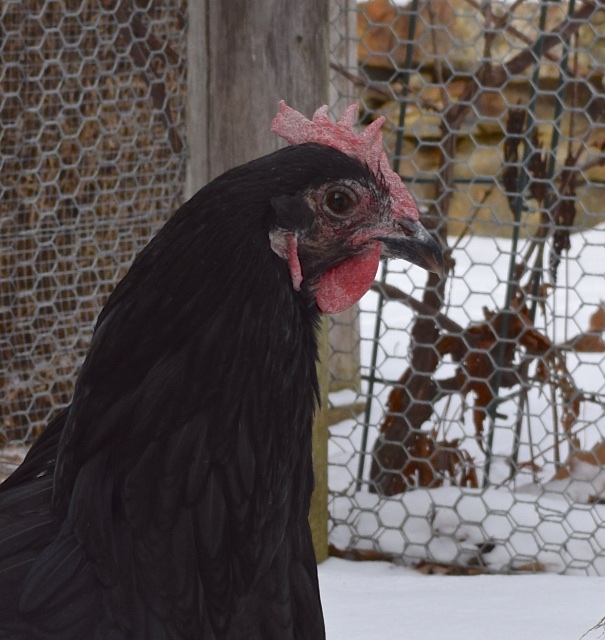 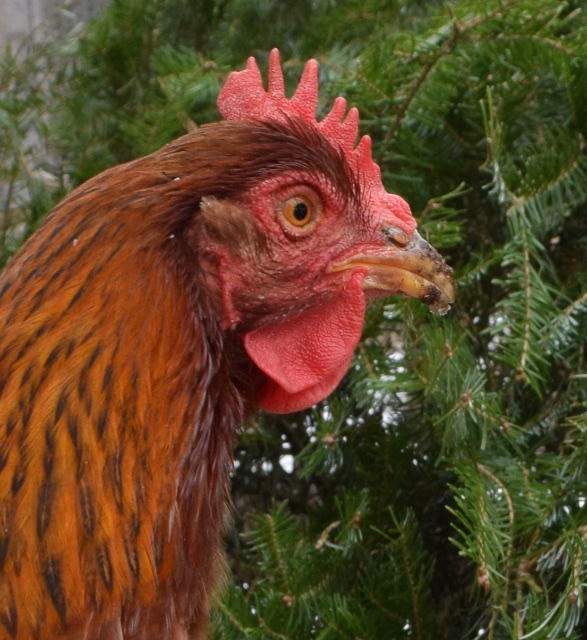 In twenty years of chicken keeping, I’ve never had a case of frostbite, but that doesn’t mean that it can’t happen. When the air is damp, moisture will cling to combs, then freeze, causing the tips to die. I’ve heard from people who have chickens that have gotten frostbite. In one case, the coop was so well-insulated that the air inside became damp; this was in northern Canada, where it is really, really cold. In that case adding vents to reduce the humidity inside of the barn, and installing a radiant heater (the safest type for a coop, as it doesn’t have coils that can spark a fire) solved the problem. Another coop was further south, but the combination of no ventilation and not enough mucking out of manure caused the problem. That was solved with management, not a heater.

I recently heard from a reader with a perfectly designed coop which is dry and clean. A couple (not all) of her hens got frostbite. This is what frostbite looks like – note that the tips of the comb are black. (The comb is shiny from ointment.) 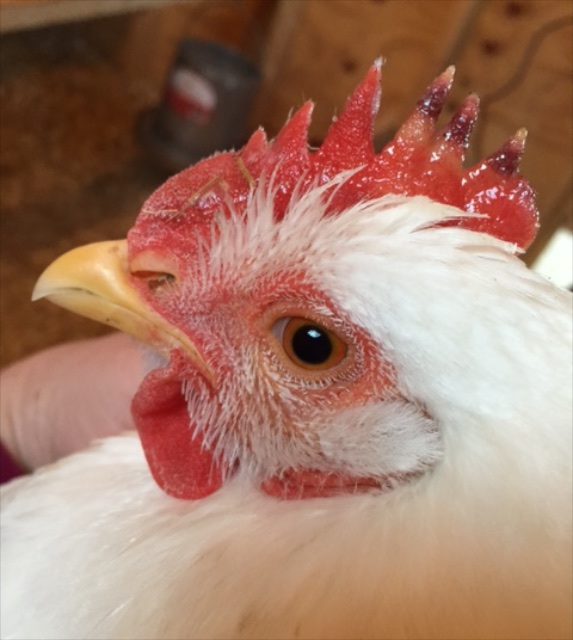 Frostbite is not a condition to ignore. It can be painful. The dead tips can fall off and become infected. The color change can cause pecking issues amongst hens. Roosters will have a drop in fertility. This hen was treated with bacitracin, and a day later looked much better. (She did get dirt on the sticky stuff, and so the comb looks dark, but that’s not more frostbite.) You can clearly see the typical white tips caused by frostbite. 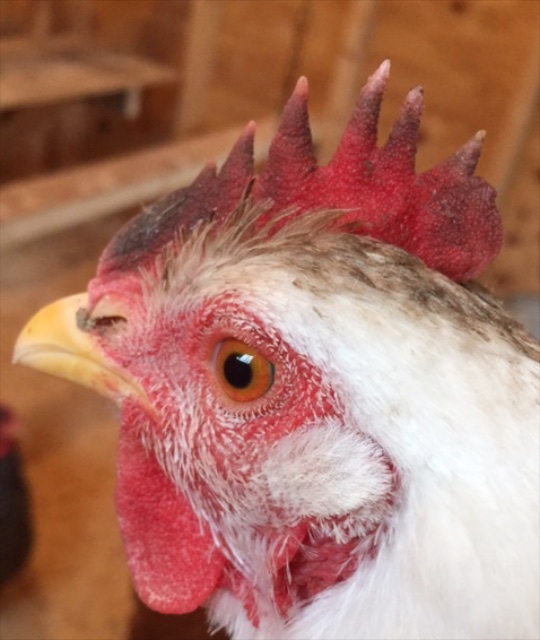 The question is, why did this hen get frostbite? After much back and forth with her owner, I think that we figured it out. The day that this happened it was blowing which caused the windchill factor to dip so dangerously low that school was delayed. Her hens stayed smartly inside. But, she still had the pop-door open. This hen is low on the pecking order, which means that she was the one delegated to stand closest to the windy opening, and so got frostbite.

If your chicken does get frostbite, bring her in and clean the affected area with a warm saline solution. Blow dry her. Slather with an ointment like bacitracin, or for a natural soother, aloe vera. If she appears to be in pain, you can use an analgesic cream found at your pharmacy. Then, I’d put her right back out with the flock. If the damage is so severe that the others peck at her, then you’ll have to isolate until healed, but be aware that it will be difficult to reintegrate her with the flock later, so it’s not a kindness to keep her inside if you don’t have to. Then, reevaluate your coop. Is it dry? Is it large enough so that all of the hens can be inside and active even during bad weather? Are the hens protected from the wind? In the case illustrated here, you can be sure that on days when the weather service warns about the windchill factor, that the hens will be inside (it’s a lovely coop with big windows) and that pop-door will be closed.