This is a post about why not to keep a rooster. First of all, hens lay eggs whether there is a rooster living with them or not. You do not need a rooster to get eggs. A backyard flock of laying hens gets along perfectly nicely without a rooster. In fact, they do better without a male in their midst. In almost twenty years of chicken keeping I’ve never kept a roo. Yes, like everyone who purchases supposedly sexed chicks, a boy has found it’s way into the mix. The male chick is always the most out-going, the most charming, the one that you get attached to. I’ve sent them all away. Luckily for those boys, I know people, and have been able to find them homes that needed roosters. That’s not usually the case.

In the past, and this is not the recent past, but more like eighty to a hundred years ago, chickens were kept for both meat and eggs, and so the male birds were useful. They were what you had for Sunday chicken dinners. The only roosters that remained with the hens were the very best of the best.

Before the advent of mail order hatcheries (which really got going in the 1920s), you’d have to breed your own stock. Prize roosters were highly valued. 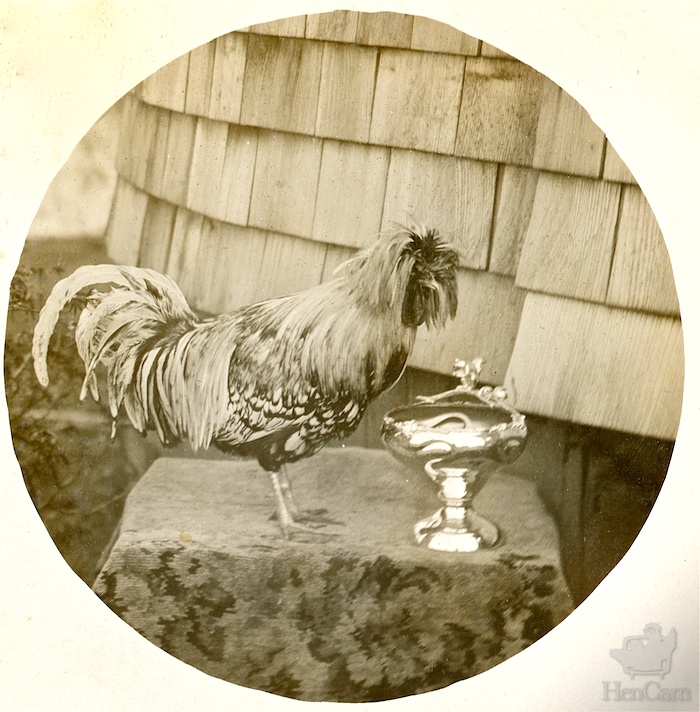 Since half of all eggs develop into males, there were a lot of roosters to choose from. For a breeding program, one rooster covers about eight hens. Only the ones with the best temperaments were kept to maturity. 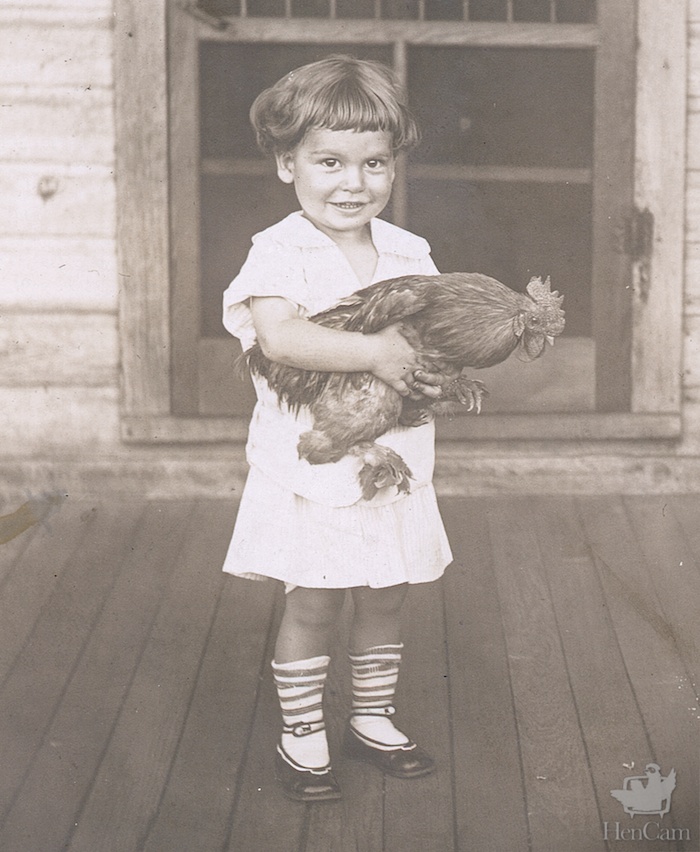 Mean roosters went into the stew pot. Even those used for breeding were rarely kept for more than a year.

Some people keep a rooster to keep peace among the hens, and believe that the pecking order is minimized with a rooster to quell spats. Although roosters can change the flock dynamic, I don’t find a rooster necessary. I’ve never had a rooster, and my girls get along peacefully with each other. If you do have a rooster, your relationship with your hens will change. My hens are very friendly and hurry over to see me when I go out to their pens. But, a rooster will keep the girls focused on him.

It is true that roosters will stay on the alert for danger. The boys will keep an eye on wandering hens, and another eye on the sky looking for hawks. For a flock that free-ranges, this can add a level of protection. However, it’s not fail-safe. I’ve heard of plenty of roosters eaten by foxes.

Most backyard flocks are not free-ranging. Being let out for forage in a small yard is not the same thing as being able to wander in fields. Backyard flocks are kept in a confined space, and that’s not suitable for keeping a rooster. Roosters mate the hens, and they do this by pinning the hen down with a beak on the neck, and treading the hen – stepping on her and flattening her down to the ground. A rooster will do this many times a day. He’ll often have a favorite hen that he bothers incessantly. Some hens will lose all of the feathers off of their backs, and some will get scratched from the rooster’s spurs. In a truly free-range situation, the hens can avoid the roo, not so in a backyard. Experienced breeders recognize this. They’ll put a mating trio together for only a short week, and then the rooster is removed from the pen. If you do keep a rooster with your hens, the ratio is one rooster per eight to ten females. Fewer hens than that, and the rooster will abuse the flock.

A rooster protects his flock, and that often means that he will chase people. An attacking rooster is a scary thing. The beak is sharp, and the spurs are dangerous. This aggressive behavior doesn’t turn on until the rooster hits maturity, so it can come as a surprise. That said, some roosters remain gentle, even as they age. The more handling they have, the better they are. 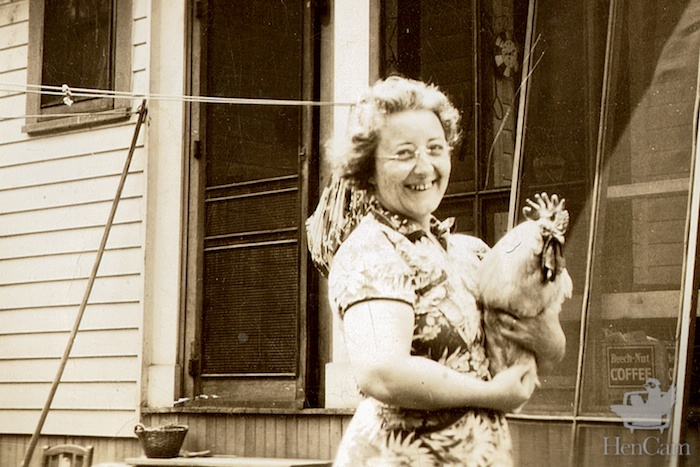 However, some are never safe to have around. Sadly, I heard from one mother whose daughter needed reconstructive surgery after the pet cockerel tore into her daughter’s face. It used to be that chickens were expected to live amiably with others in the farmyard, and breeding stock was selected for temperament. Only the nicest roosters were bred. But, that is not the case today – hatcheries select solely for looks or egg production. If you end up with an aggressive bird, please don’t keep him. 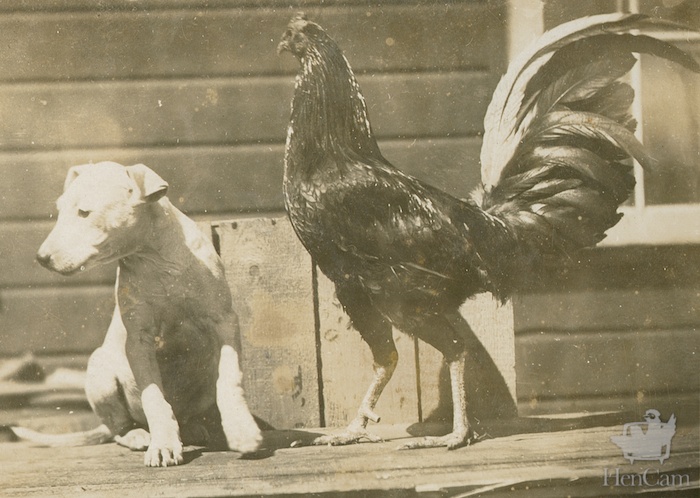 The main objection to roosters is that they crow. Although children’s books tell stories about roosters that crow to wake up the farmyard, which seems rather sweet and useful, in actuality, the rooster begins crowing at daybreak and doesn’t stop until nightfall. Some roosters even crow after dark. Crowing is deeply ingrained in roosters. I’ve recently seen a product that purportedly stops the rooster from crowing by restricting the neck. I believe that, contrary to the manufacturer’s claims, that it is cruel.

You might not mind the sound of a rooster crowing, but it’s likely that someone will. In my small town we’ve had a dispute between neighbors. It escalated into a terrible situation of animal poisoning. That can never be condoned. (I’ve written about that in a letter to the editor of the Boston Globe.) However, what’s clear is that a rooster’s crow is often not welcome. Since your laying hens are productive without a rooster, be considerate if your neighbors are within earshot.

Some people keep roosters because they want to breed their own chicks. This is wonderful if you are a responsible breeder. Remember that half the chicks will be boys. You will not be able to find homes for them, and you can’t keep them as pets. Are you prepared to raise them for your own table? Will you send them to the livestock dealer so that someone else can harvest them? If not, then you shouldn’t hatch out eggs.

I love going to poultry shows and seeing 4-H kids carrying their pet roosters around. I very much appreciate the people dedicated to perpetuating historic breeds by hatching eggs and raising chicks. But, just like I love dogs, but don’t breed them, so too, I love my chickens but rely on responsible breeders to supply me with stock. I hope that you do, too. 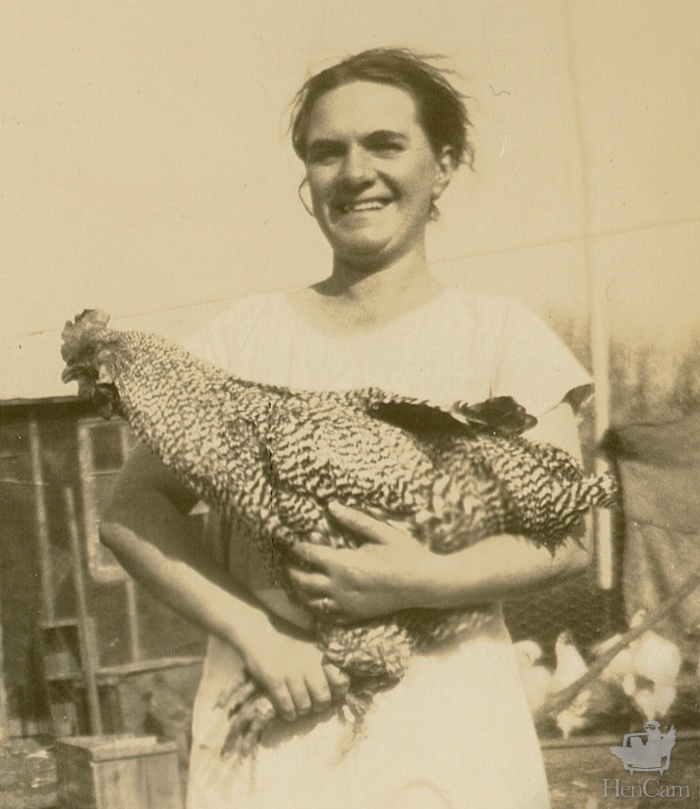