A chicken can’t chew. She doesn’t have teeth. She does have a pointed, hard beak that pecks. Sometimes she breaks food into smaller bits with it, but often she takes in as large a chunk as she can swallow. She has a triangular tongue that fits perfectly inside of that beak. The tongue helps to push the food to the back and into the esophagus. Muscles help her to then move the food further down the digestive tract.

Chickens are designed to eat small amounts, constantly. That’s why feeding big handfuls of treats is a bad idea – hens need to be active and work for their food. Their systems aren’t made for eating a few distinct meals a day. But, sometimes what a hen swallows is big. I once saw Lulu slurp a baby snake down whole, like a strand of spaghetti. Sometimes hens find a bonanza of bugs in the garden and gorge themselves all in the course of a few minutes.

The first stop for all of this food in the digestive process is the crop – which is a pouch in the hen’s neck. Physically breaking down the food happens later, in the gizzard, which is a very powerful muscular sack, inside of which are tiny pebbles (grit) that the hen has swallowed on purpose. The gizzard effectively acts as a millstone to grind up food as coarse and hard as corn. The crop isn’t like the gizzard at all – it’s mostly just a holding area. Watch your hens over the course of the day, and you’ll see the crop change shape. This can be worrisome for a new chicken owner. A hen that looks like this: 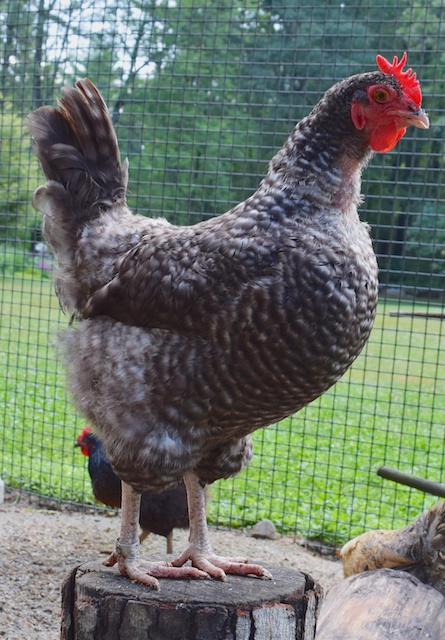 will sport a huge and solid bulge like this: 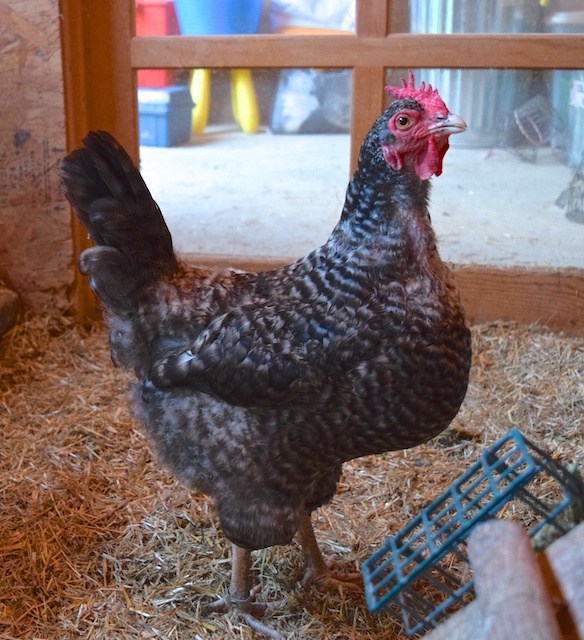 What isn’t normal is when that mass becomes impacted. This can happen when the hen eats long strands of grass, or too many sunflower seeds with the shells still on, or other such foods that get tangled up and hardened in the crop. If that happens, your hen will show signs of distress. She’ll stretch her neck. She’ll become listless. She might look panicked (as one of my hens did when she got a long, tough leek stuck in her.)

If your hen is impacted (and not just a glutton, as Veronica in the above photos – she’d just come in after a glorious afternoon of free-ranging), then there are a few things that you can do. You can massage the crop to try to break up the mass and move things along. You can also feed her olive oil, either by soaking some food with it, (if she’s still eating) or by carefully dosing her. (See my YouTube video.) Crop impaction is serious. I’ve done a necropsy on a hen that died from impaction. It was a friend’s bird and what I found out was that she had gorged on long grasses and leftover garbanzo bean curry (fed to the hens with the kitchen scraps.) What the hen didn’t have in her crop were laying hen pellets. That’s why I like to see my hens eat easy to digest pellets before going free-ranging. I think that it reduces the risk that they’ll gorge on the wrong stuff.

In any event, impactions are rare. What is normal is a healthy, happy hen with a ridiculously bulging crop. Don’t worry about her.