I was not surprised to get the call, yesterday, that Clementine had died. She had been a very sick hen, and when I pulled her back from the brink, (read about that here) I didn’t expect her to go on to a long life, but I had hoped for more than the two weeks that my care ultimately gave her. 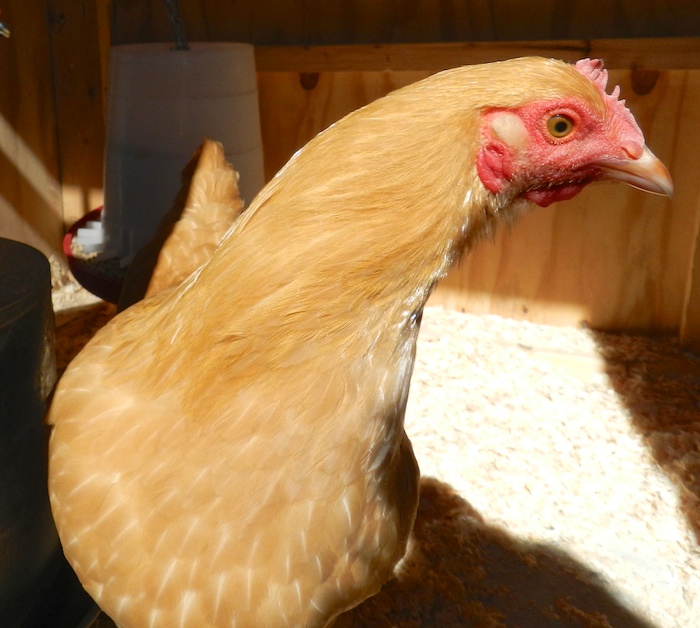 Clementine as a young and healthy pullet.

Still, she had been able to rejoin her flock, get love from her best friend, Lisa, and comfort the residents of the nursing home.

Clementine died peacefully in her sleep. Few hens pass so easily, and so that was good, too.

I did a necropsy, which confirmed what I had deduced. Clementine was an internal layer. Instead of the yolks progressing down the reproductive tract, and forming eggs, they were dropping into the body cavity. This is not uncommon. Sometimes a yolk misses the fallopian tubes, and so drops into the body cavity, where it is reabsorbed, and so the hen is ill briefly, and then she recovers. Sometimes the fluids in the body cavity become infected. Dosed with antibiotics, the hen might stabilize, the unformed eggs solidify, and she can go on with her life. In other cases, the the internal laying turns into peritonitis, and that kills the hen. Often, when the internal laying isn’t severe, my spa treatment of an epsom salt soak helps to move things along, revitalize the hen’s systems, and she goes back to laying normally.

The necropsy on Clementine showed something that I haven’t seen before. Clementine was egg-bound. A soft-shelled egg had become stuck in the reproductive tract. It was so far up that palpation would not have detected it. It must have formed in the shell gland (which is near the exit point) and then, instead of moving out, backed up. Over time, yolks and whites progressed towards this stuck egg, surrounded it, and formed a mass. This effectively blocked her tract, and so new yolks, being released from the ovaries, had no place to go but into the body cavity. Her abdomen was a solid mass of yolks. Poor girl.

It is amazing what a hen can live with. Clementine, up to the end, was eating and drinking. The necropsy showed a full gizzard and a healthy amount of muscle. She had rejoined the flock, which had accepted her. She was weak, but otherwise acting normally. In Clementine’s case, saving her so that she could have a last two weeks was the right thing to do. But, this is rarely the case. Clementine revived, and was eating and functioning on her own. A hen that is listless and can only eat gruel, one that has to be kept isolated and in a cage, should not be kept alive. When a hen acts like that, something disastrous has happened inside of her. Something that cannot be fixed. Having done over twenty necropsies on such birds, I can tell you that if the spa treatment, TLC, and (depending on the symptoms) antibiotics, don’t improve things in a day or two, that heroics and babying the hen, actually causes suffering. I’ve come to the conclusion that if the hen can’t live a good chicken life outside with her flock, then she should be euthanized as soon as she stops being able to eat on her own, or at least be allowed to pass on without intervention. When a hen doesn’t want to eat, she’s sending a very strong message in the only way she can. It’s up to us to respect that.

These decisions are hard. They go against the grain of us wanting to do anything and everything for animals we love. But, letting hens go is as much of a part of backyard chicken keeping as collecting eggs is. If you have a small flock, you will be faced with these decisions. I’ve discovered that with these animals there are few grey areas. Either they are well, or they are not. Either they will revive with sensible care, or they won’t. And if they don’t rebound, it’s up to us, as their caretakers, to not let them suffer. As evidenced by Clementine, a hen can live for weeks and even months, with things going catastrophically wrong inside of her. Clementine, amazingly, retained a decent quality of life to the end. But, if she hadn’t, prolonging her life would not have been a kindness. Having seen what I did in the necropsy, I am glad that she passed quietly in her sleep.

I will be discussing this case and others in my Advanced Chicken Keeping Workshop. For more information about that and other programs, go to my Upcoming Events page.