Clementine is the most beloved of the nursing home hens. So, when I got a call from Life Care telling me that she wasn’t looking well, I hurried over.

When I arrived late in the afternoon, Clementine was in an upright “penguin stance.” She was incapable of walking up the ramp and putting herself to bed. It was obvious that she was in distress. When a hen stands like that, she has something very, very wrong going on inside of her. I put her in a dog crate and brought her home. I set Clem down in my dark and warm laundry room. I didn’t fuss with her. Honestly, I thought that she was a goner. Usually, with a hen this ill, it is not a kindness to extend her life. I hoped that Clementine would pass peacefully overnight.

But the next morning, despite her extreme posture, Clementine was alive! 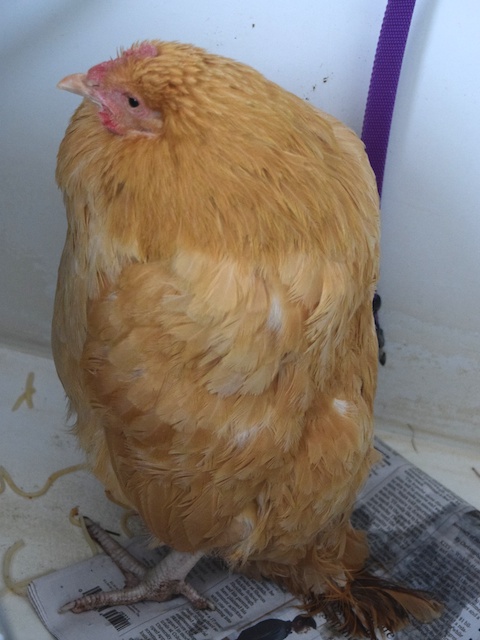 She was so upright that she was balancing using her tail feathers. I palpated her abdomen. As I expected, I could feel a large mass. Without actually looking inside (via autopsy after death) I couldn’t be 100% certain, – but I suspected that Clem was an internal layer, and that eggs had been dropping into her abdominal cavity, where they solidified. (Sometimes they remain liquid and become infected, but that feels like a water balloon, and Clem’s abdomen was hard.) I’ve have found such masses, doing autopsies, and know that the birds had lived with the solidified eggs for months if not years. Then again, Clem’s mass could be cancer. That I can’t treat, but if it was internal laying she had a slight chance of survival. This hen was very special to some special people. I set to it.

I laced her water with Duramycin, an antibiotic approved for poultry. If a hen is too weak to eat or drink on her own, I do not feed with a dropper. Not eating or drinking is a sure sign that the bird be allowed to die. Clementine showed that there was still life in her. She drank. 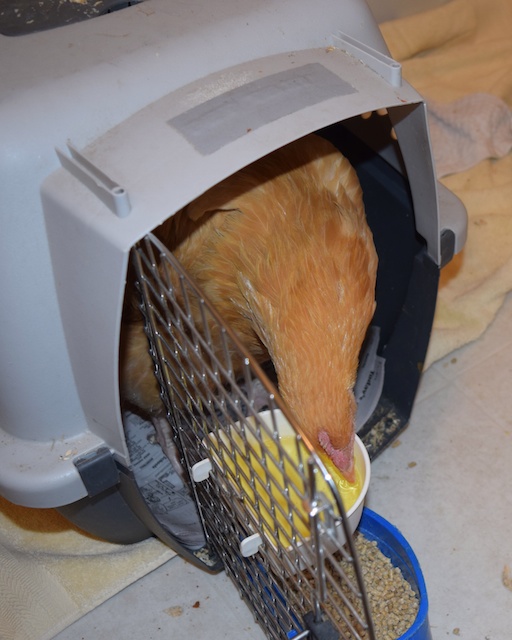 Sometimes hens take on that penguin stance because they have a diseased or blocked intestinal tract. They won’t (and shouldn’t) eat, and they can’t produce manure. Clem, however, was pooping. Another good sign was that there were bits of solids in the manure, and it wasn’t bright green or yellow (those colors indicate an active infection.) 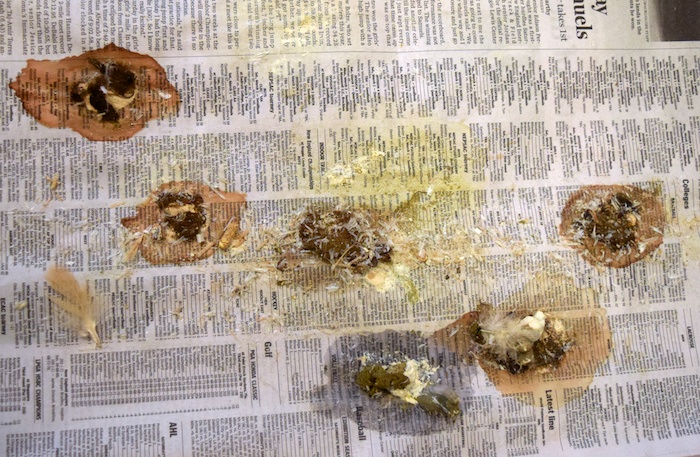 Clementine’s keel bone stuck out sharply, which is another sign of an ill hen that hasn’t been eating or digesting food properly. I fed her scrambled egg and gave her rolled oats for treats. She ate with the appetite of a healthy hen. She was particularly delighted with spaghetti coated with olive oil.

Next, I gave Clementine a long, warm soak in epsom salts. If there were any impacted eggs in her reproductive tract, this would help to move them out. Epsom salts are also a revitalizing tonic. She didn’t excrete lash, but she did like the spa treatment. 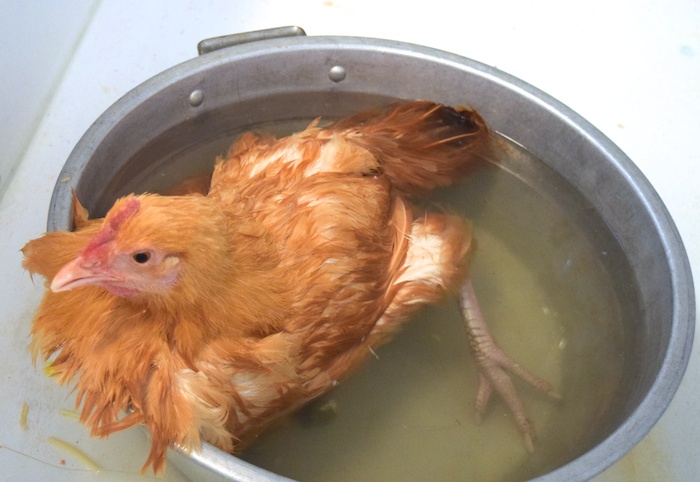 Clem also liked the blow dry. She waddled up and sat on my lap. I believe that one reason that she was reviving was because this is a friendly hen. That’s why she is such a good therapy hen. Clem is calm and trusting. 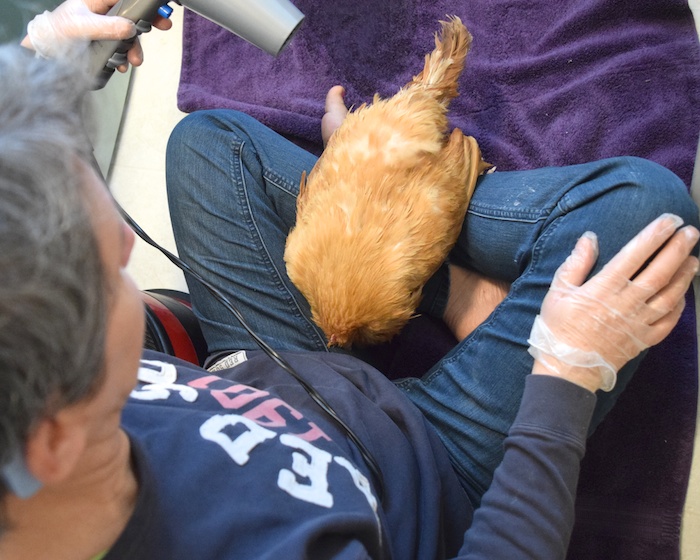 Still, she was a very sick bird. 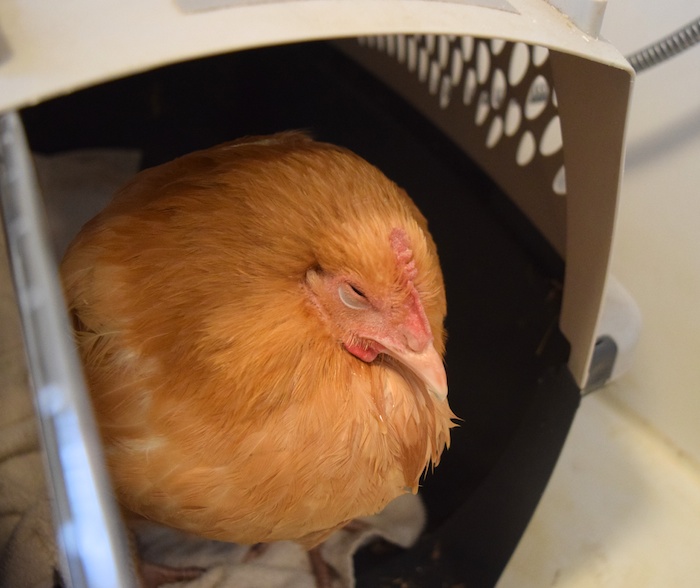 I don’t usually bring sick hens inside for any length of time. However, Clementine wasn’t part of my flock, and she was ill, so I didn’t want her in my coop. Also, temperatures were well below freezing. Not only did she need to be warm, but I didn’t want to go outside numerous times during the day! She stayed in my laundry room.

Over the next few days, I continued to give Clementine antibiotics in her water. I kept her calm. I monitored her manure production and food consumption – both improved, as did her stance. 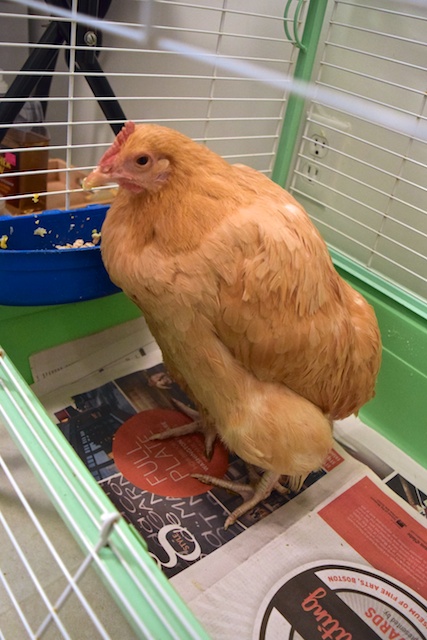 Each day saw an improvement. 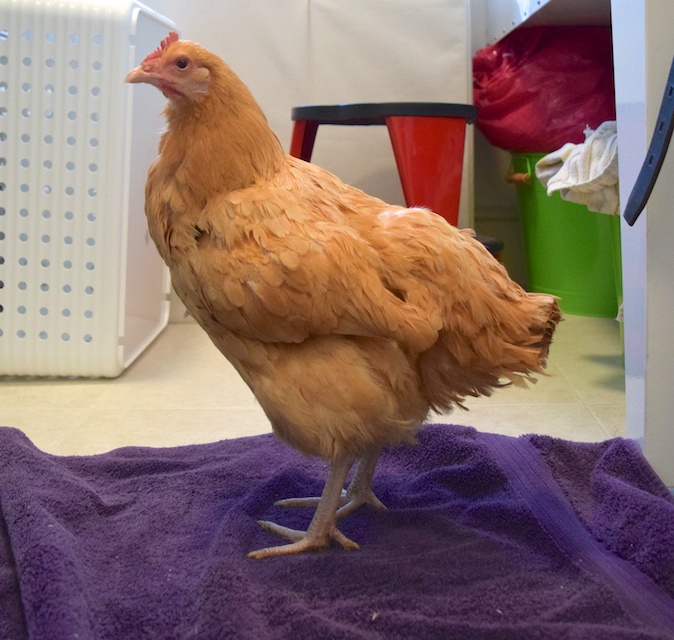 I trimmed off her tail feathers ruined by her penguin stance, but she no longer needed them to balance! Clementine was now walking in a more chicken-like way. She was able to peck. She started scratching the ground. She was even able to preen. 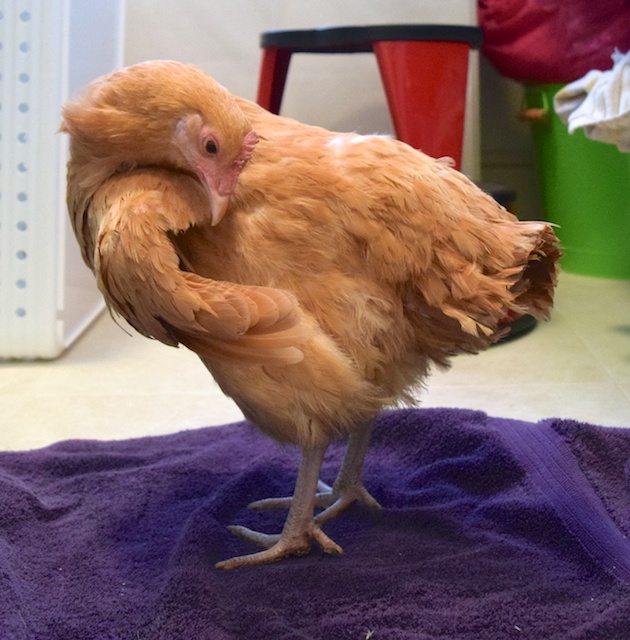 But, a hen kept indoors, and one that has been too weak to dust bathe does see an increase in the numbers of poultry lice crawling on her. She needed a dusting with louse powder.

It is not good to keep an ill, listless hen alive. One that can’t do normal chicken behavior, or eventually live in the coop as a full member of the flock, should not be kept going. I observed Clementine carefully. This was a hen on the rebound. I had never before been able to bring a hen back from such a severe case of (what I believe is) internal laying. Clementine continued to earn her stripes as a very special chicken, indeed.

I picked her up from the nursing home on a Thursday night, and a week later, on a Friday, I returned her to the flock. More about that in the next post.