As much as I like the idea of a closed flock – one that is raised together and never exposed to other chickens – there are times when I do add a hen into my established group. I do this with trepidation, as it is rarely easy to integrate a new chicken into a mature flock. Chickens establish a pecking order. Once it is in place you shouldn’t notice it much. Closely observe your flock and you’ll notice subtle body language. Perhaps when a treat is put down the highest status hen will get it first and keep others away. You’ll see some hens always at the outskirts and others keeping a clear distance from birds that they don’t get along with. Where chickens roost is determined by the pecking order. Bring in a new chicken and the established routine is upset. The hens lowest on the pecking order will challenge the newcomer to see if they can move up. Your dominant hen will want to ensure that she keeps her place. Everyone will tell the new hen to go away. The behavior can range from pinning the new hen down and pecking at her head (which can kill), to chest thumping, chasing, and blood letting. Less severe reactions to a new hen will be to pull feathers and keep her away from food. Even if you have only one or two hens and you want to add a “friend” your chickens won’t see it that way and drama will ensue.

That said, it is possible to increase your flock size by adding a mature hen to the group. This past weekend I had to bring Beulah, a Black Star, back into the fold. After starting out her life here, she left as a young pullet to be part of the nursing home group. When it became clear that Beulah was pecking too severely at her flock mates I decided to take her back. In this case I didn’t have to worry about bringing in disease, so no quarantine was necessary. I just had to integrate her with her old chickmates.

I have no idea if she remembered the coop or the hens. I think that she at least recognized this place, as she looked comfortable and familiar with the surroundings and seemed to know where to go. But, before she could explore and meet the Ladies, I put her into the rabbit hutch so that she could see the flock and they could see her. 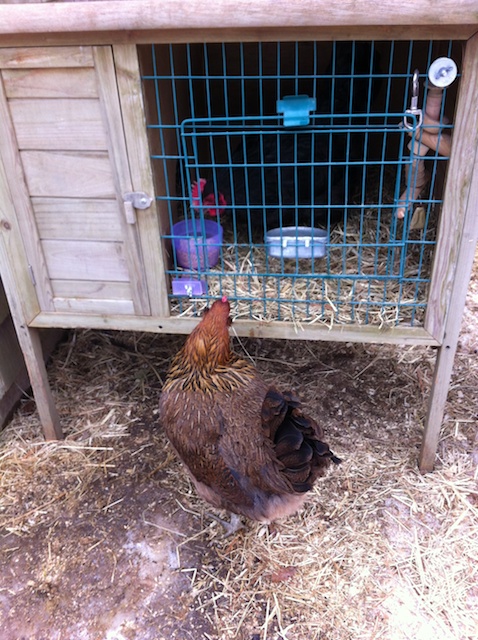 The next day I put her into the storage side of the Little Barn. There’s a screen door so everyone could eyeball each other. Beulah felt comfortable enough to lay an egg. 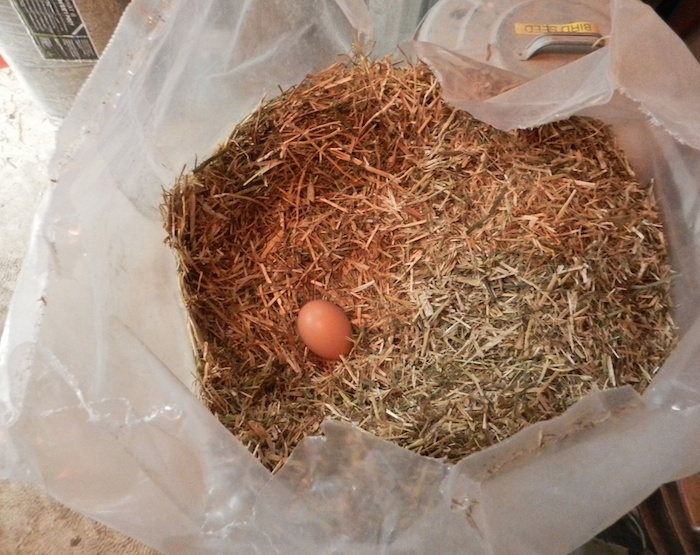 Since there was no chest-thumping and challenges across the screen door, I moved on to the next stage which was to put the new hen in the same space with the flock. I let the Ladies out onto the lawn, and then brought Beulah to join them. It’s always best when integrating a new hen into a flock to do it on neutral turf away from the coop, and in a space large enough so that the hens can make grand gestures, but have plenty of space to move away from each other. 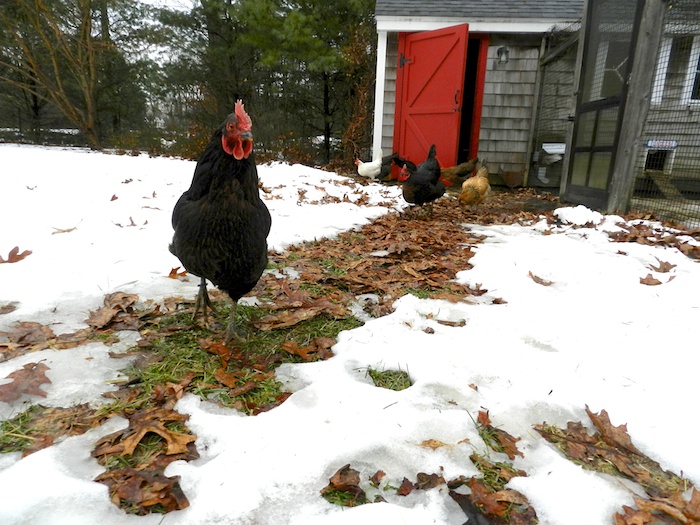 It’s also good to have distracting things to eat. The hens were so excited about seeing the ground and green (albeit frozen) grass, that they began grazing and ignored Beulah. For awhile she was able to eat alongside of the others 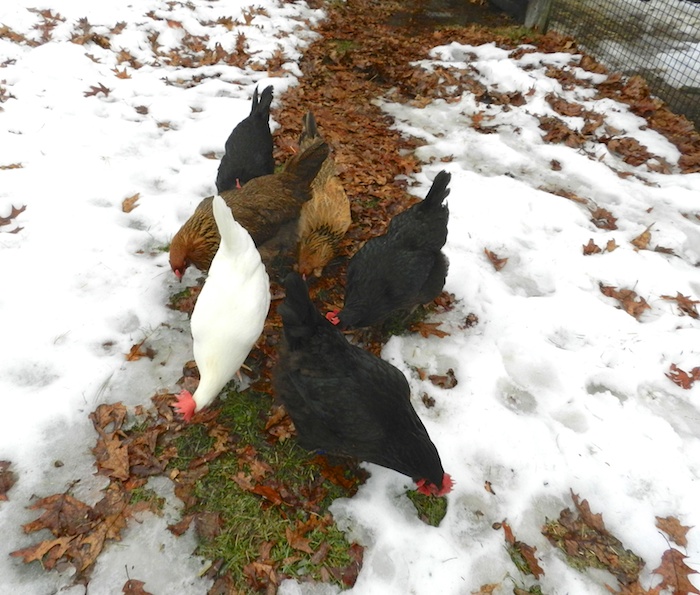 But then the other hens noticed the interloper in their midst. They told her to go away and she moved off. 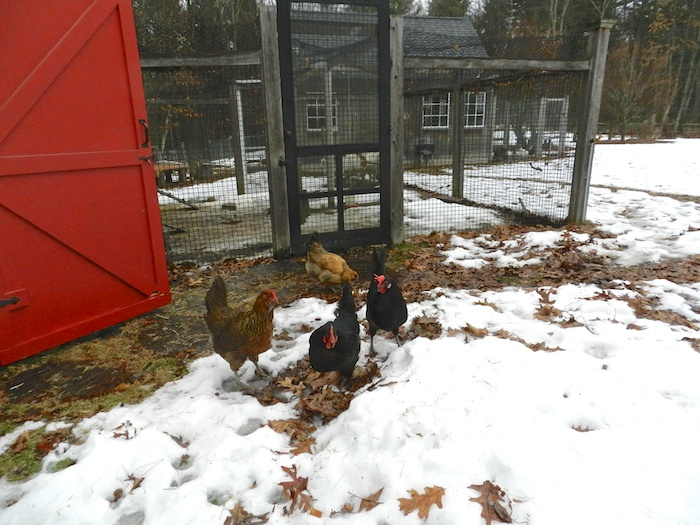 I didn’t see severe aggression, so I tossed some scratch grains into the pen and invited everyone in. Once again, Beulah was able to join the flock until the food ran out. Once the grain was eaten up, she was relegated to the outskirts, but no one attacked her, which was very good behavior on the part of the Ladies. 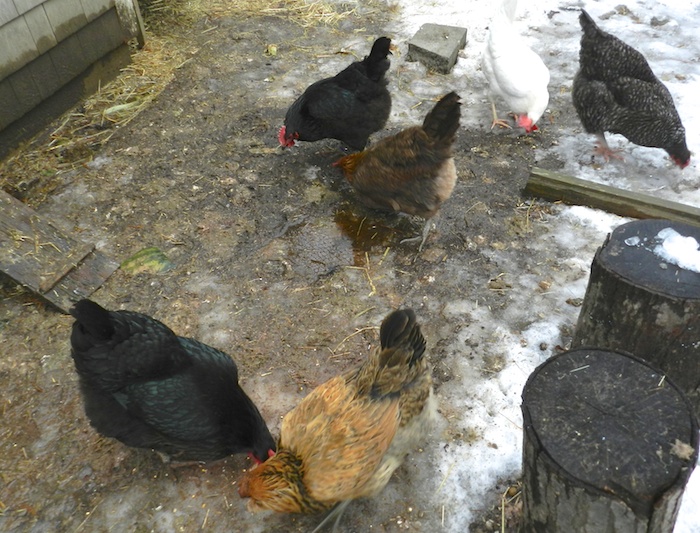 Things were going well, but as it grew dark, I put Beulah back into the rabbit hutch. I didn’t want her to be crowded in with the others in the morning before I opened the pop-door. As much as they were getting along in a large area, I didn’t think that things would go so well if they were all confined to the coop.

The next morning I let Beulah back out. The hens mingled. Misty, the highest status hen, made sure that Beulah stayed at the fringes. It started to lightly snow. Everyone wanted to go inside. Misty had no desire to accept Beulah into the coop. Beulah stood at the ramp, looking in. I was pleased that she wasn’t being chased away from the entrance, and she wasn’t huddling in a corner (as some rejected hens do.) But, she was getting snowed on, and so I tucked her back into the hutch. Then I went into coop. Although the Ladies look healthy and in fine feather, and the flock dynamics appeared to be peaceful, the time spent watching Beulah interact with them raised some red flags. I’d noticed that Owly is missing feathers along her neck, and I was mildly concerned about Beatrix, who seemed to be occasionally fluffed up in an unhappy stance. I decided to spend some time watching the Ladies. The key to taking good care of your animals is to spend quiet time observing them. This often doesn’t happen in winter when the temps are well below freezing. Within a half-hour of watching, I discovered a serious problem.

Misty is a feather picker. I saw her walk up to Owly, who stood there placidly, while she pulled feathers out of her neck. Misty did the same to Beatrix and even to the higher status Nancy Drew. Bad behavior is not always accompanied by commotion, so this had been going on for awhile without me knowing it. Feather picking is very bad, and I’ll write about it in my next post.

Misty was brazen in her behavior, so I scooped her up and had her swap places with Beulah. Now Beulah could join the flock, while Misty paced inside of the hutch. 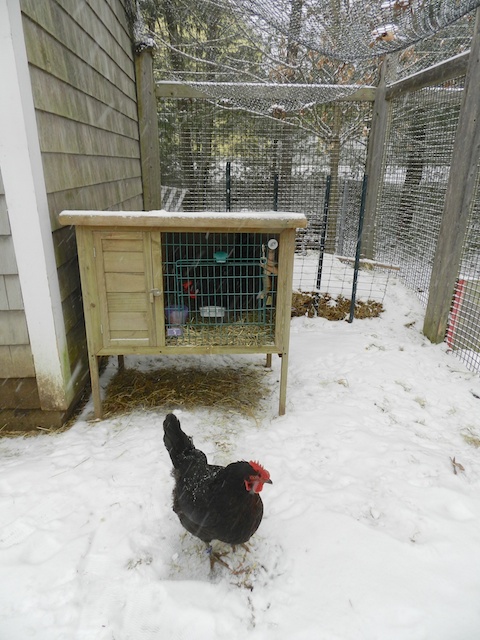 Beulah decided to leave the snow and go into the coop. There was a bit of consternation. She smartly got onto the roost. Twiggy and Beatrix moved in to get a closer look. 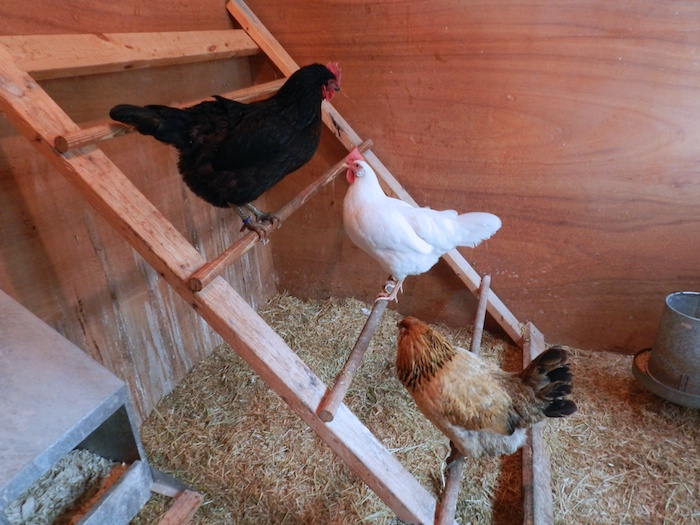 Beatrix, hoping to increase her status against this interloper, pecked at Beulah’s head. Beulah was taking it and I didn’t want to see blood, so I needed to stop this behavior. All I had to do was to put my hand between them. Beatrix tried four times, encountered my hand (I didn’t push her, I simply gently blocked her pecking), gave up, and went back to the floor of the coop. 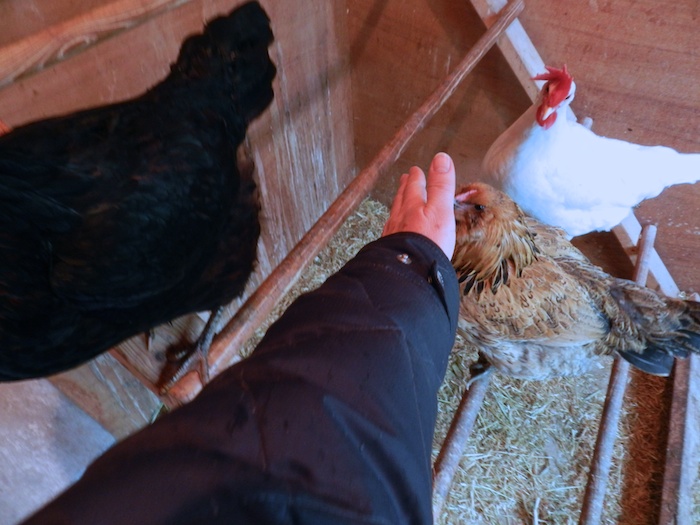 Within minutes, I was quite pleased to see this body language. The flock was going about their busy day, ignoring the new hen. Beulah was comfortably on the roost, not being harrassed. 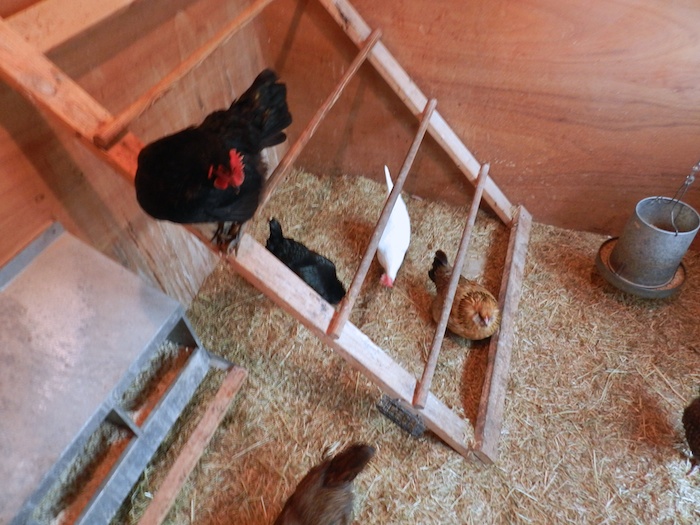 Then it got better. Twiggy and Veronica hopped onto the roost. They each selected a rung, and all three started preening. Birds only groom themselves when they feel safe and comfortable. 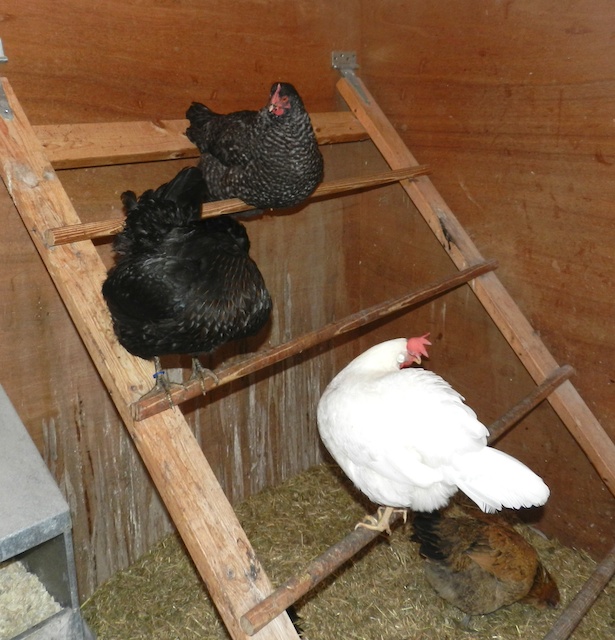 And then Veronica took a nap. 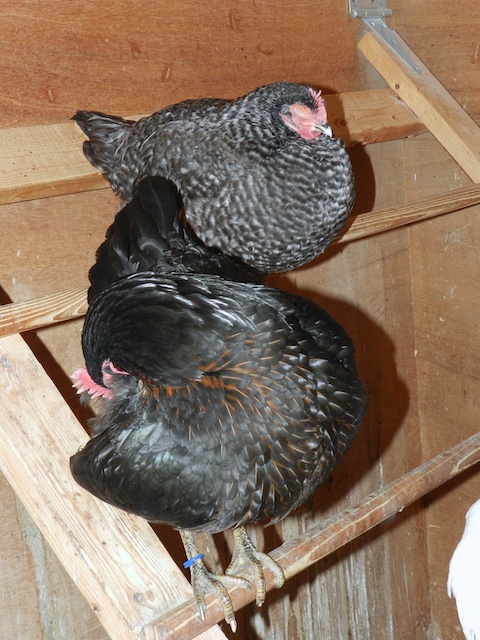 Success! Beulah got to stay with the Ladies. Misty spent the night in the hutch. More about that story tomorrow.