A chicken is designed to peck. It’s beak is hard, pointed and curved just so to be able to peck and pull. A hen’s neck is built so that it can turn quickly, and jab in a sudden motion. A chicken’s eyesight can zero in on the smallest speck, and stay locked in even when she juts out and pecks. A chicken’s beak serves her well for the sort of food she eats, but it also is crucial to her social life. Status is determined by body language, and if posturing doesn’t convince a flockmate to back off, a hen will resort to a swift peck. I’ve written about pecking order, and how to stabilize it and keep it in check here. Sometimes, though, even in flocks with no pecking order drama, a related problem arises that causes no end of consternation on the owner’s part – feather picking.

The feather picking that I’m going to talk about here isn’t the aggressive, status-seeking pecking that happens with pecking order squabbles. Feather picking can occur in the most peaceful of flocks. I’m currently seeing it with my Ladies (the six young hens raised together as chicks, seen on the HenCam main cam.) For awhile now I’ve noticed that Owly’s neck feathers have been looking sparse. 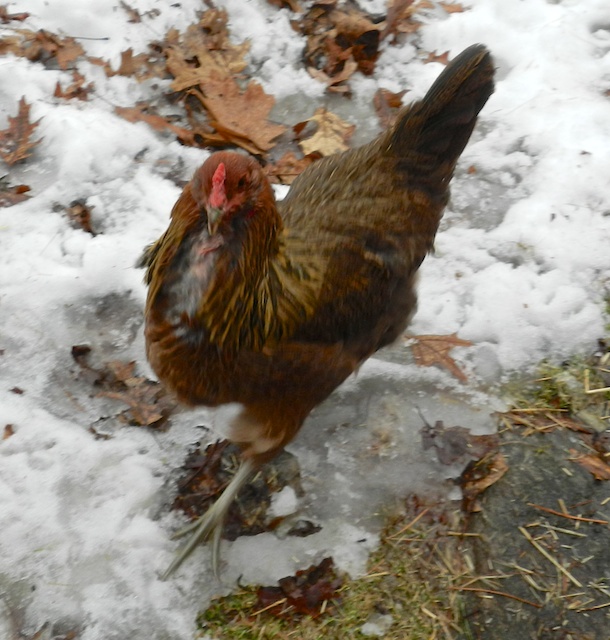 I didn’t worry much about this. There are no bare or red areas, and everyone else is in good plumage. But, over the last few days, as I’ve reintegrated Beulah into the group, I’ve been watching flock dynamics closely and I haven’t liked what I’ve seen.

I observed that the dominant hen, Misty, is a confirmed feather picker and eater. I watched as she walked up to Owly, pecked a feather off of Owly’s neck, and ate it whole. 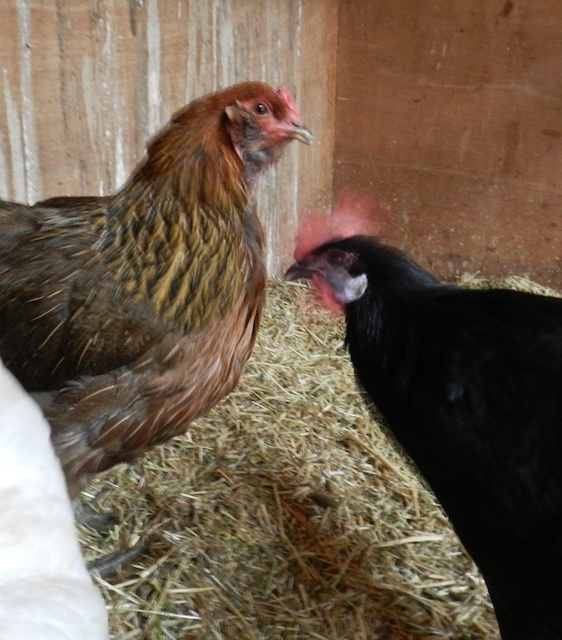 Owly as much as offered her the feather. She didn’t budge. She didn’t look concerned or bothered. I watched as Misty walked over to other hens, eyed their feathers, and pecked. She targeted specific feathers, purposefully plucking one at a time and eating each. None of the hens seemed to care a whit. This is how feather picking can go on and the henkeeper won’t notice until there are bare spots. The exposed skin isn’t pretty for us to look at, but it’s not a big deal to the hens themselves. However, if the feather picking escalates and blood is drawn, then you have a serious problem, because when chickens see red they will peck, sometimes causing severe wounds or even death.

Sometimes you’ll see feather picking occur at only one time of day or in one place. Betsy used to have the habit of going up to dust bathing hens and plucking out their soft vent feathers. This behavior stopped when the weather turned and the girls no longer dust bathed at length. Feather picking is also prevalent at roosting time, when one hen will pluck the feathers off of another’s back. This can get so localized and severe that a hen can have a hole pecked into her. Years ago this happened in my flock, and it was only chance that I discovered a large wound under the covering of hard outer feathers. Removing the hen for treatment changed the pecking order. When she returned she no longer roosted in that spot, and the issue disappeared.

If it was just a dominance issue, it’d be easy to solve – remove the offending hen for four days, and when she returns, she’s lower on the pecking order and therefore won’t feather pick. That’s what I’ve done to Misty. Not only is she a feather picker, but she is also an overly assertive hen who had become too pushy. She’s now in with the Gems, who I’m hoping won’t let her near them to get a feather or peck at a comb. (I’ve been watching, and she’s tried to feather pick. It’s too early to know how this will play out.) I’ve fortunate to have the Gems, a sensible and calm flock of hens who don’t put up with nonsense. They reformed Edwina, who was a bully, and would have killed Buffy if she could have, but in with the Gems she is a polite old lady. I have confidence that Misty, too, will settle in and behave herself.

The first thing to do when you see signs of feather picking is to assess the damage. Is it cosmetic, or are there wounds? Bare skin should be darkened with blu kote (in some countries called gentian violet.) Hens won’t turn cannibalistic if they don’t see red. If the skin is broken, or if there are serious wounds, then that hen must be removed until she heals. If there is only one hen doing the feather picking, you can remove her from the flock and hope that she won’t go back to the habit when she returns. One hopes that the hens will tell her to stop, but there’s not much to be done when the picked-on hen encourages the behavior, as Owly did with Misty. It’s hard to understand chickens, sometimes.

One theory about feather eating is that the hens are looking for roughage. There might be truth to that, so always have poultry grit (coarsely ground granite) available free choice. They might also be looking for calcium, so supply oyster shell in a dispenser. Although I have these things out in the pen, looking back, I realize that there were many winter days when they were frozen under snow or ice.

You also want to provide as many interesting and nutritious things as possible for the hens to be distracted by. Feather picking is often worse in winter when hens are confined and bored. Put out cantaloupes, squash, cabbage and kale. Don’t close up your hens in cold weather – as long as they have clear ground to walk on, they can go outside. Sunshine and exercise is essential. Reevaluate how much space your hens have. Provide outside roosts. Give them a compost pile to scratch in. All of that will lessen the severity of the picking.

But, nutritional deficiencies and boredom don’t explain all of feather picking. This bad habit often starts during the molt, when feathers are on the ground. A hen tries one and likes it. Then she sees feathers loosely fluttering on another hen, pecks and eats that. Soon, she’s plucking the feathers off of her neighbors. It is often is the dominant hen that feather picks. Perhaps she pecked at another hen to assert her claim over a treat and ended up with a feather in her mouth. She ate it and decided to get another. In some flocks only one hen will be the feather picker, but in others it might be several.

Meanwhile, I’ve uncovered another feather picker in with the Ladies: Nancy Drew. And, I’ve just added Beulah, who’s reason for return is that she was harassing and feather picking the other hens at the nursing home. Both hens are Black Stars and look alike. This just might solve the problem. Hens of a feather flock together and so already the two are hanging out. Yesterday I saw them companionably next to each other on an outside roost. Nancy pecked at Beulah who snaked her head and said no. Then Beulah tried to peck at Nancy, who also made it clear that she wasn’t a source of edible feathers. Perhaps they’ll cancel each other out? Meanwhile, despite a bit of feather loss, the flock is healthy and behaving like happy chickens. I’m going to do what I can (grit, oyster shell, healthy distractions) and leave it at that.

UPDATE: I’ve been looking further into feather picking. There’s quite a lot of research (much done in the European Union because of their new poultry regulations)  that sheds light onto what causes feather picking. Genetics, diet, and housing all come into play. I’ll be reading the scientific papers and distilling it with a bit of my own commonsense to come up with suggestions for the backyard flock keeper. Stay tuned!