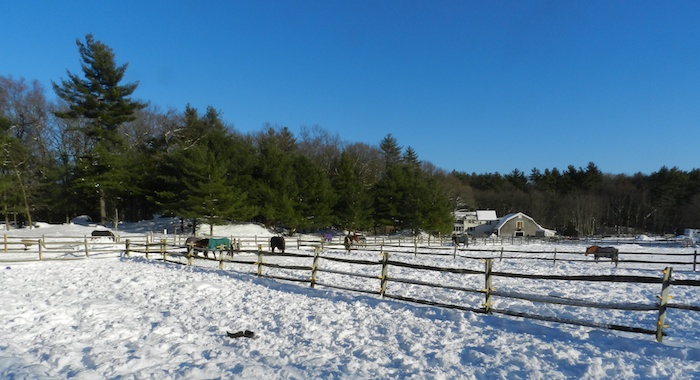 There’s a mare at Little Brook who has become hard to catch. At night, her two pasture buddies come right up to the barn manager, let her put on their halters, and take them back to the stable where hay and grain is waiting. The mare dances off. The barn manager has a lot to do, and in winter the evening chores take longer. She leaves the mare, attends to other animals and comes back. But the mare dances off. To the human it is annoying, time consuming, and rude behavior. But, the mare is enjoying herself. The winter days are long and boring. Despite the food waiting for her in the barn, she’d much rather see the person stumble through the snow and try to catch her.

I’ve been watching this drama unfold over the last few weeks. I’ve seen the mare frustrate a number of good horse people, already red in the face from cold, go even redder. I was at the stable yesterday afternoon and offered to go get her. The mare has no history with me, although she has watched me come and go. The geldings were already in the barn. The horses who live out were eating their hay. The mare was at attention, waiting for the person to make a fuss and try to get her. This, more than grain, has become the highlight of her day. I walked into the field and said hello to her. She raised her head. Hah! She said, Catch me if you can! I said, Oh, I’m not interested in you, and I headed across the pasture towards the fence line where another mare lives, a mare that also likes to get the geldings’ attention. Hello Tallulah, I said. I ignored the mare. The mare is very beautiful and arrogant. This is not a bad thing in a horse. In the show ring she would have presence. A horse that shows off is fun to ride, as there’s energy and flash underneath you. But, in this case, that arrogance was her undoing. Out of the corner of my eye I could see the mare take a step towards me. I stopped, turned to her and called her name. She stood quietly. I walked up to her, put on her halter, and walked her calmly out of the field. Good Girl, I said. I am, she said.