Most chickens are not long-lived, but a few defy the odds and make it into a grand old age.

In October of 2004, I got five chicks from a neighbor who had purchased a large order from Murray McMurray Hatchery. Two were Barred Rocks, two were New Hampshire Reds and one was a Black Star.

The Barred Rocks were named Eleanor and Edwina, and I soon rued the day that I got them. They were voracious eaters, and woe to any chicken that got between them and their food. They established themselves on the top of the pecking order, and stayed there with the use of brute force. On the plus side, they didn’t go broody and they laid eggs fairly consistently. Other hens died, but they lived on. Eleanor and Edwina stopped laying eggs. They got older and older, and yet remained the dominant hens. Edwina became one of the stars of my children’s book, Tillie Lays an Egg. She was a smart hen and food motivated. It was easy to train her to pose for the photographs. That made me like her a little more.

Eleanor died in 2012. Edwina kept on. She bullied Buffy and so was sent to live with the Gems, who were unimpressed by her swagger. Edwina learned to live unobtrusively. She didn’t bother anyone and they didn’t bother her. It turned out that I rather liked this Grand Dame. As other chickens aged, fell sick and died, she lived on. Her comb remained red and her appetite remained intact.

Last month I noticed that the normally pristine feathers around her vent were streaked with white manure. A week ago I noticed a distinct change in her energy level. Three days ago her comb went from red to grey. Last night she stood hunched, a pose Edwina had never done before. Although she was failing quickly, a chicken can hang on in that almost-dead state for days, if not a week or longer. She’d had a very good run. I didn’t want her to suffer. This morning I asked Steve to euthanize her. 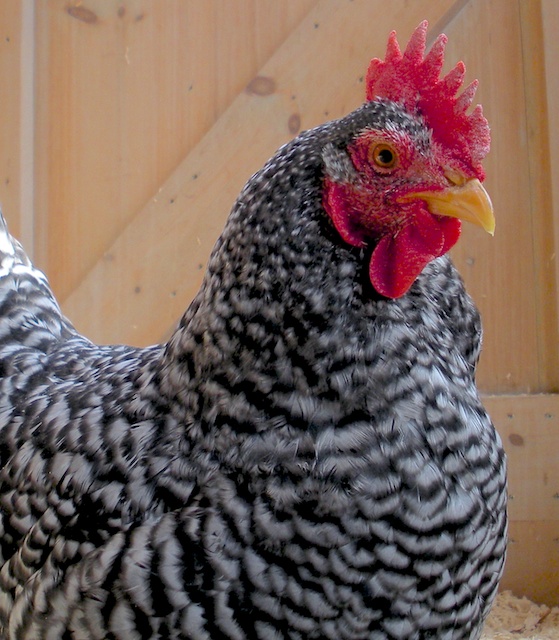 As I always do with my deceased birds, I did a necropsy. As with my other very long-lived birds, she didn’t have tumors or cancer. What she did have was an old intestinal tract that was no longer functioning. If I hadn’t euthanized her, she would have starved to death. Prolonging an old or sick chicken’s life is rarely a kindness. Edwina had earned a humane end. Despite our early history, she had become a solid presence in the chicken yard. I shall miss her.