It’s been cold. On many nights, the needle on the outside thermometer has dipped well below 0°F. Daytime temps rise only into the low teens. I’ve written about cold weather care for chickens here and here. I’ve followed my own advice of don’t worry and keep things dry and give them a little extra feed. I have well-designed coops, and that makes all the difference in how the hens fare in this bitter cold.

The one thing that I do is to keep an eye out for frostbite. Surprisingly, chickens can walk around on ice and snow and not show any pain or signs of freezing in their feet. However, their combs will succumb. Frostbite can cause pain. It can reduce a rooster’s fertility and stop hens from laying. You’ll know severe frostbite when the tips of the comb turn black. They might even fall off.

I don’t worry about that with Veronica. She’s a Cuckoo Marans, which is a winter-hardy breed. Not only does she have an extra layer of soft feathers under her harder, water repellent outer feathers, but she also has a tight, low comb. She’s not going to get frostbite, no matter what Old Man Winter throws at her. 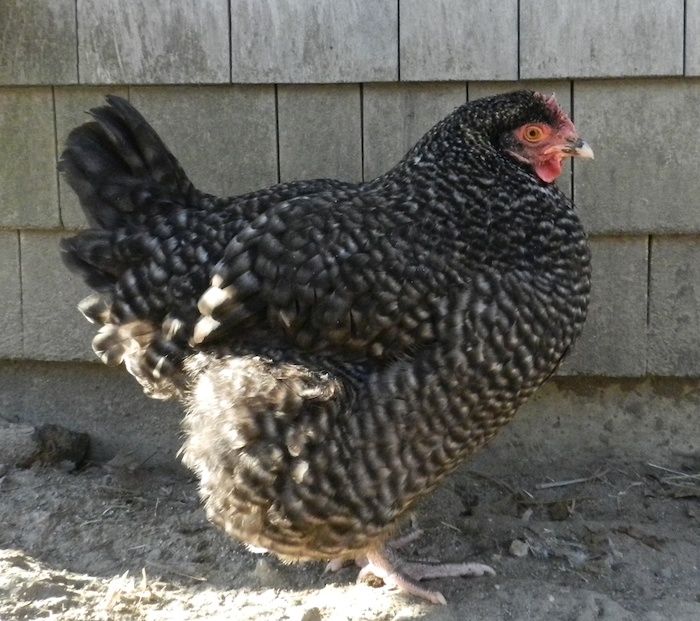 Nancy Drew is not a winter hardy breed. She’s a Black Star – a hybrid designed for laying. She has an upright, medium-sized comb. But, the cold hasn’t stopped her. She’s consistently laid an egg every other day. However, her comb is a duller red than the bright flame of summer. 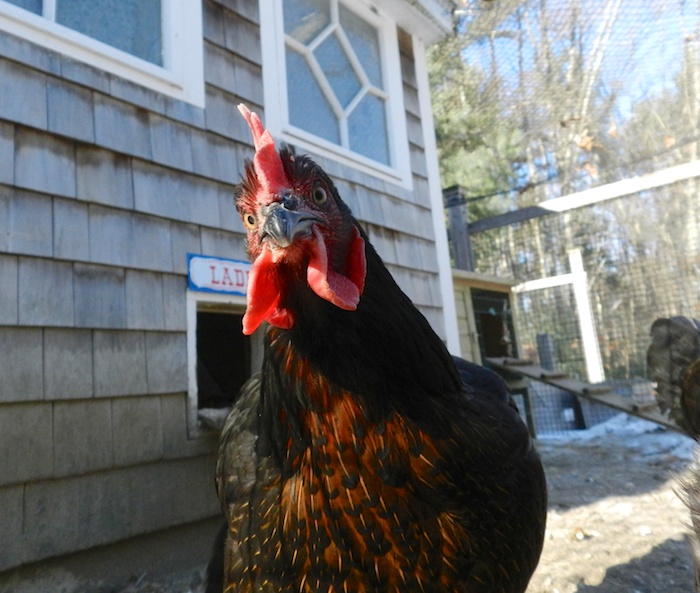 I’ve kept a close eye on Twiggy. Leghorns are not winter hardy. They don’t have downy undercoats for warmth. 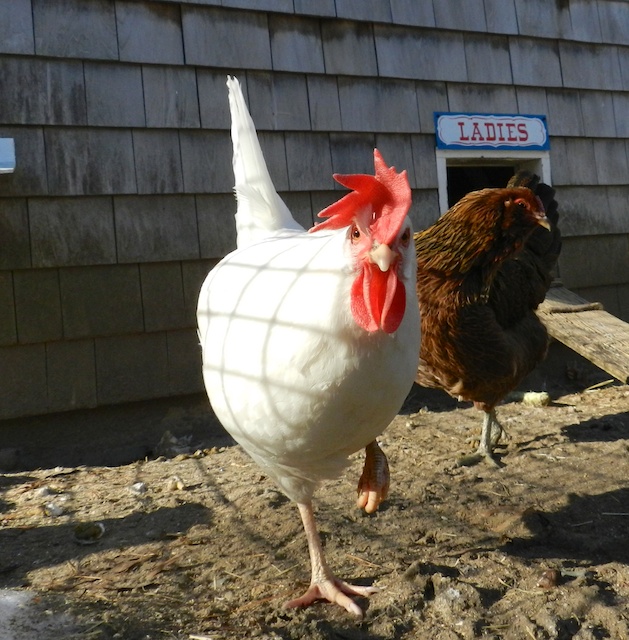 They have ridiculously large and floppy combs which are useful for dissipating heat in the summer, but prone to frostbite in the winter. Twiggy’s comb has a bit of a grey cast to it, but is otherwise fine. 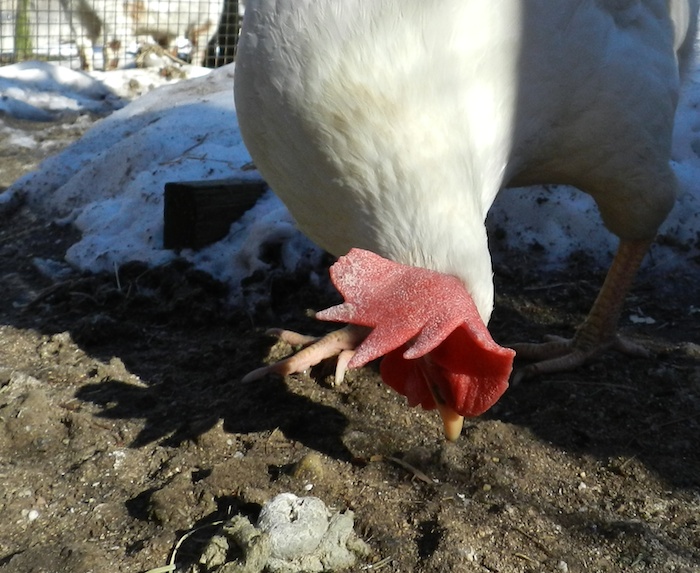 Smearing vaseline on the comb might protect it from frostbite. The petroleum jelly keeps water off of the comb itself, and therefore makes it less prone to freezing. My hens, in their dry coops, don’t have wet combs, and besides, rubbing vaseline on a hen is a messy, difficult job. Additionally, the hens that would benefit are the ones that don’t like handling. So far, I haven’t bothered.

The cold has not stopped Twiggy from laying her daily egg. The other morning it was -5°, and I saw her hop into the nesting box to do her job. She is also the first one outside in the morning. I suspect that if she was in weather like they have in Montana, down to 20 below, that the cold would be too much for her. But, here in frigid New England, Twiggy is doing fine.

However, the cold has been hard on Misty’s comb. Like the Twiggy, she’s a Mediterranean breed, sleek and with a large comb. She’s a flighty, nervous girl, so she’s not going to sit still in a warm patch of sun. Her comb, which looks like this in the summer 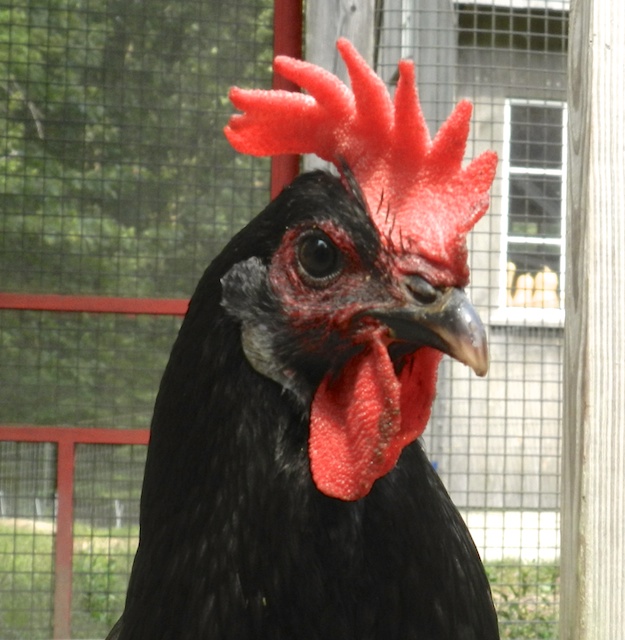 has shrunk down to a grey ridge. 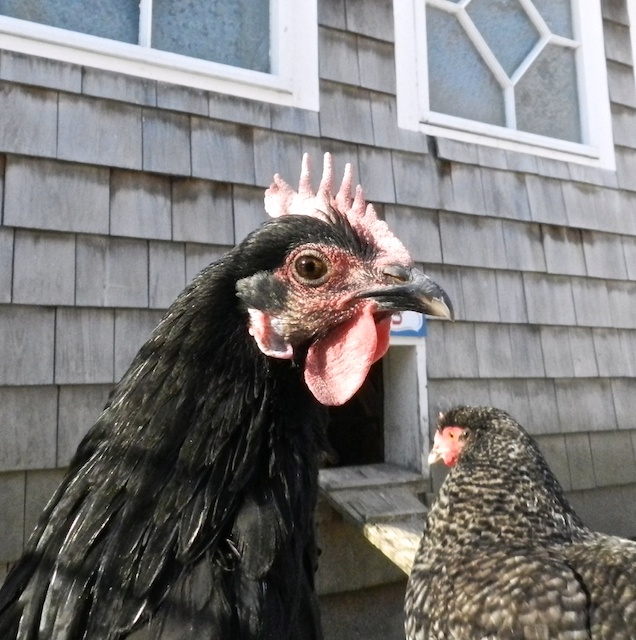 Misty shows no sign of distress or pain, and there are no blackened dead spots. Will it plump up again in the summer? I don’t know. Will Veronica ever lay an egg? I don’t know that either.

I do know that all of the hens are behaving normally. The ones that lay, do. The flock goes outside for exercise and sunshine. This frigid polar weather isn’t getting them down.