The deep litter bedding system has been widely touted and has become a trend. The gist of it is that you start with a 12-inch layer of clean bedding, and leave it there for up to a year. The chickens add manure, which they shred as they scratch around, it eventually disappears into the bedding. The bedding itself breaks down creating rich humus. Bugs arrive and burrow and the hens eat them. The bedding is added to over time so that the top layer remains dry, and yet underneath it is like a warm, damp compost pile. Done properly there is no rank odor and the hens are happy, busy and healthy.

It’s wonderful in theory, and is a good system – but only in certain situations. It is rarely adaptable for the backyard chicken keeper of a small, mixed-age flock. It is also not the no-work system that people say it is. Like a properly done hot compost pile, it requires constant attention to maintain the right balance. Done right, your hens’ entire coop floor becomes a rich playground to scratch and feed in (for bugs will thrive). Done improperly and you have a manure-laden, disease-breeding, stinky mess.

My first issue with deep litter is that is should be built on a dirt floor. A wood floor will absorb ammonia and moisture and will eventually rot. Concrete doesn’t allow for microbes and drainage. But, I don’t like dirt floors. They allow for vermin like rats and mice to burrow in to the coop. Predators can gain entrance. Depending on drainage, a dirt floor can absorb and hold wet and ammonia.

Secondly, you’ll have a foot of bedding in your coop. Do you have the appropriate doors that can open and shut with that much bedding pressing against them? Are the walls of your coop constructed in such a way that they won’t disintegrate with that bedding fermenting against them?

In order for the deep litter system to work, the bedding needs to stay damp under the top layer of dry shavings. There will be a lot of moisture in the air. The coop has to have very good ventilation. Production farmers who do deep litter in large and airy barns, often with fans and cupolas, are providing their flocks with good air quality. But, I’ve heard of many backyard hens, housed in small coops with deep litter who suffered from respiratory ailments due to breathing bad air.

Another issue that I have with deep litter is that its success depends on active hens foraging and turning over the bedding. If your chickens spend most of their days outside and only roost in the coop at night, the poop will build up, especially under the roosting bars. The barn floor will simply turn into a big, stinky manure pile. If you have old hens that stand around more than scratch, then they won’t be able to keep the deep litter working properly. If you have too few hens, the deep litter will not be turned over as needed. Too many hens and manure is added faster than the system can break it down.

I also worry about the buildup of internal parasites that happen in deep litter systems. Manure carries eggs and bits of nasty creatures like tapeworms, that burrow into the bedding, and continue their life cycles by being consumed by insect hosts, which are then eaten up by the chickens. I control internal parasites here by mucking out the pens weekly and so interrupting the parasite’s lifecycle. I’ve never had a parasite problem here and have never had to use chemical wormers. The deep litter system, by housing the hens over their manure, can be a breeding ground for infestations. On top of that, it can also be a nursery for fly larvae. I recently heard from an inexperienced chicken keeper who lost two birds to fly strike (maggots get into the animals’ flesh. It’s horrible.) Supposedly, with deep litter, the chickens eat all of those larvae and maggots. However, if the population of the bugs becomes greater than the chickens can control, you will have a very serious problem.

Deep litter can be accomplished successfully in an all in/all out system. This is when the farmer gets a flock of pullets and puts them all into fresh deep litter bedding. After one or two laying cycles, the hens are harvested, the bedding removed, the barns sanitized, and then a new flock is brought in. This mitigates the fly and parasite problem. Also, the hens don’t live long enough for an internal worm problem to take hold. But, all in/all out is not practical for the backyard enthusiast.

People who advocate for deep litter claim that their barns stay warm, because the deep litter, while breaking down, creates heat like a hot compost pile. A deep litter system in a perfect balance does make the coop cozy, but chickens really don’t need heat in the winter, and the damp that comes off the pile can cause an unhealthy chill, especially if ventilation isn’t ideal.

Promoters of deep litter talk about the ease of care, that all you have to do is top off the bedding once in awhile. That’s true, but when I think about a year’s worth of manure and compost to shovel and haul, my back starts to hurt. I’d much rather tidy up weekly.

I do agree with the advocates of deep litter that earth and compost contains healthy microbes, and that loose dirt to scratch in provides necessary activity and also protein from the bugs that are consumed. But, you don’t need deep litter to provide these things. I have a compost pile in the chicken run. It does all of the positive things of deep litter, but it also keeps the run and coop dry and tidy. My compost in the chicken run is a modified deep litter. There’s soft earth for digging, healthy microbes, and bugs. I toss in garden refuse, bedding cleaned out of the goat stall, and scraps from my kitchen. 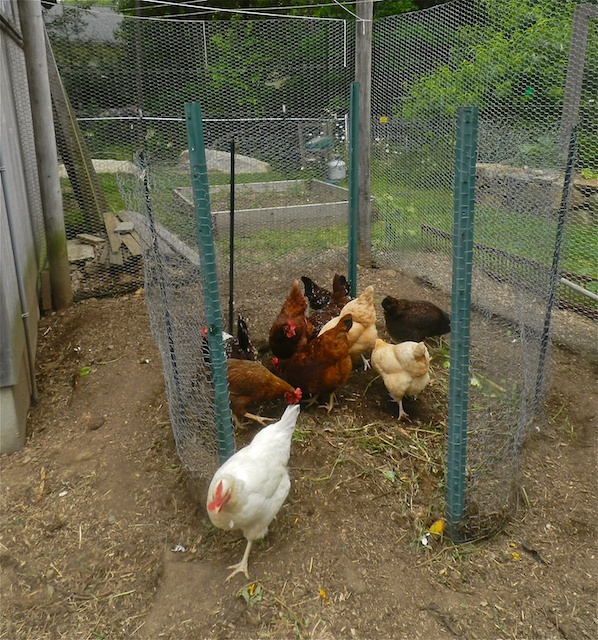 Meanwhile, the coops are dry and clean. It works for me.

The deep litter system might work for you. If you have the proper housing. If you are experienced enough to recognize when it is right and when it isn’t. If you have active, young chickens to do the work. If you know enough to regulate moisture and can judge when to top off the bedding. Don’t jump onto the deep litter bandwagon because it is the trendy thing to do, or because you’ve been told that it’s the best way to be sustainable/organic. It’s one option. It can provide an enriched environment for your hens. But it can also go very, very wrong. As with all animal keeping, pay attention to the individuals under your care. Think critically about the facilities you have. Constantly monitor your flock’s health and behavior. There’s a lot of advice out there and right now, it might seem as if everyone is telling you to switch to deep litter. Heck, I give a lot of advice here on this blog – of course I hope that you’ll agree with me. But, what I’d really like you to do is not to blindly follow what I say, but to listen to your animals. Spend time in the barn with them. Breathe their air. Watch their behavior. Then you’ll make the right decisions for them and yourself.