In the past I’ve been able to grow pumpkins and other hard winter squashes using a practice of benign neglect. The pumpkin patch is dug over in the spring, compost added, plants set into the ground and then the whole thing is ignored until harvest. One can get rather smug about one’s systems until things go horribly wrong, as they finally have done this summer.

Over the summer, the plants flourished. There was a jungle of huge pumpkin leaves. Weeds sprang up, too. Bees hummed. Sure, there were a few squash borers, but the plants still thrived. Squash were spied in the lush undergrowth. In the last few weeks, the plants wilted, from, what I thought, was typical fall mildew. 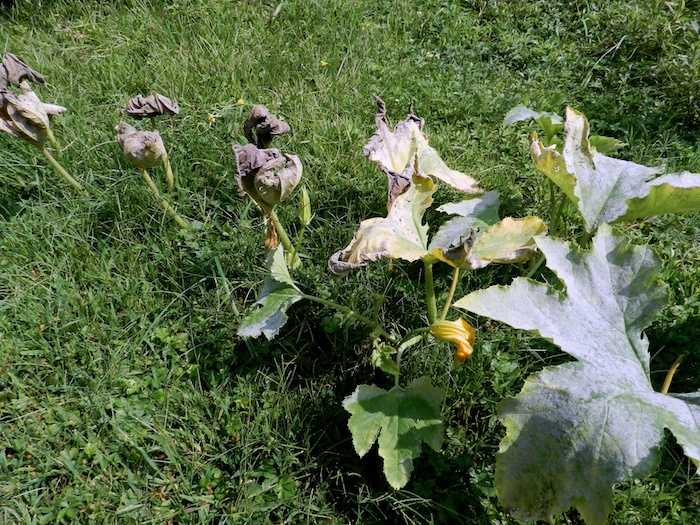 But a closer look revealed a serious pest hidden right in plain sight. Isn’t evolution amazing? The mature squash bug is exactly the same color as dead squash leaves. Train your eyes to look and you might see one. 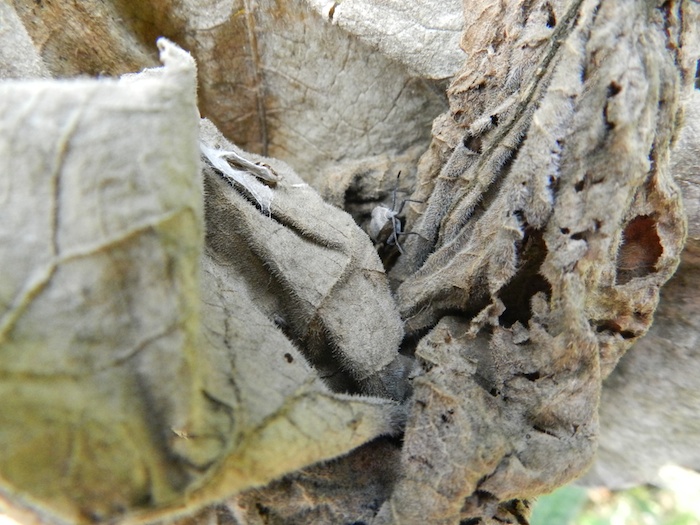 Look again and you’ll see a ravenous, rampaging army. I cut off some infested leaves and tossed them to the Gems. They are even too nasty for the chickens to eat. 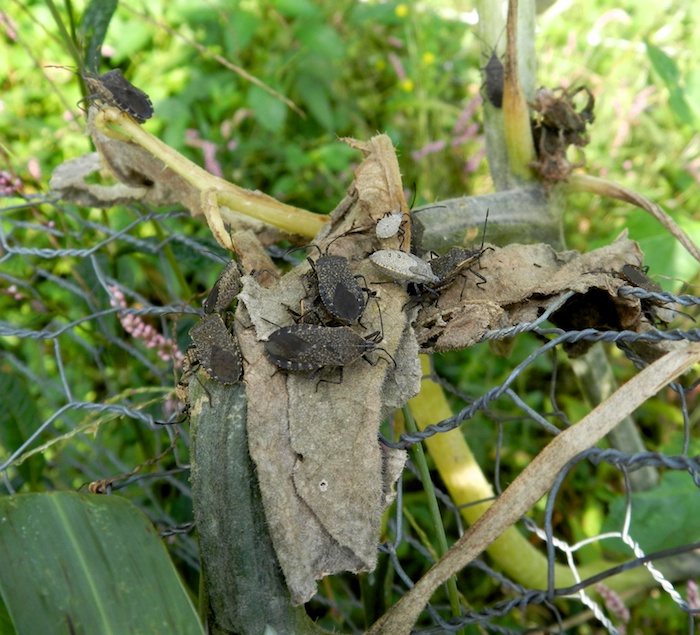 This late in the season, the squash bugs continue to lay eggs and multiply. 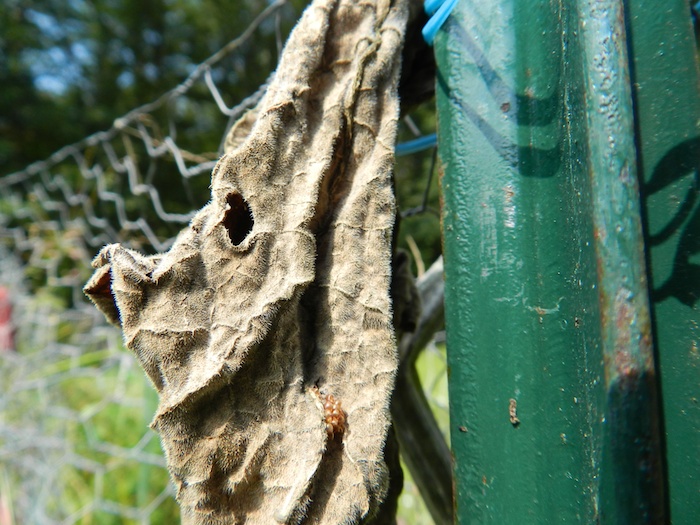 My system of letting the hens turnover the pumpkin patch in fall and spring to control insects helps to keep the borers in check, but it turns out that squash bugs overwinter as adults. I couldn’t just pull out the diseased plants and compost them, as that’s exactly the environment that the insects thrive in. The only thing to do was to bag up all of the plant matter (and as many insects as I could grab with it). The extension service info says that gathering and throwing out all of the plants will help to control the borers, too. Any bugs left on the ground will lack shelter and hopefully will die in the cold. 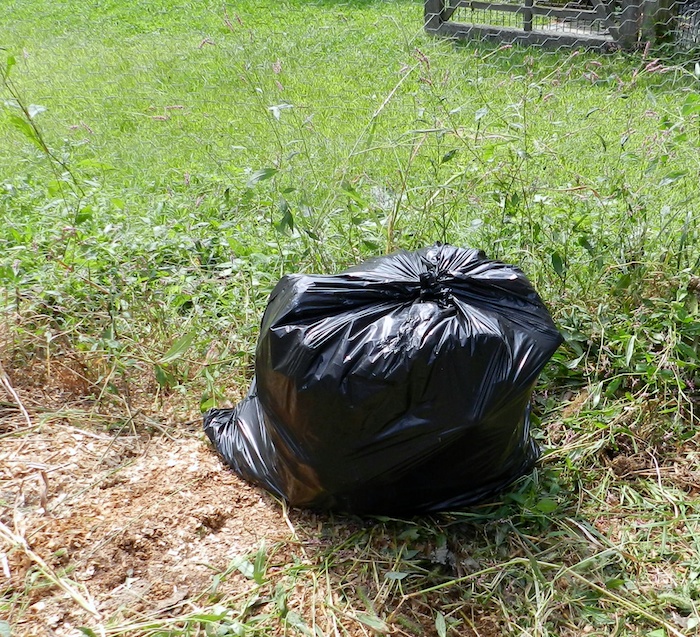 Underneath the weeds and the plants was a sparse harvest. 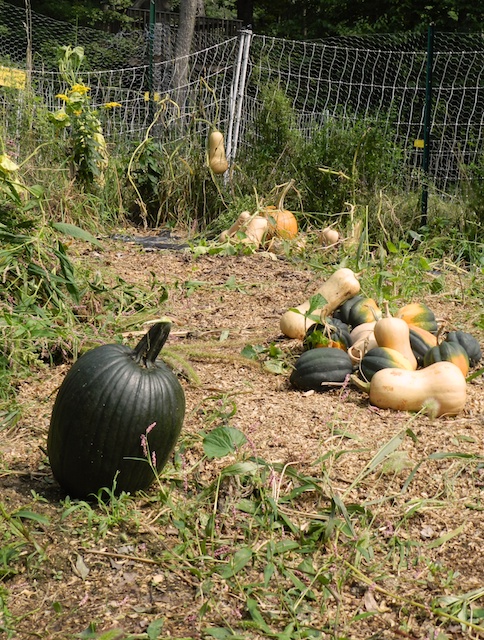 I’ve learned that mulch, even plastic, creates a safe haven for these insects. That bit of advice (read today, sadly too late) was proven true, as the strip of black plastic mulch I’d put in the pumpkin patch (because I had some leftover and thought I’d try it) was swarming with squash bugs, and the few vegetables there were ruined by the suckers.

At least the chickens were willing to help clean that up. 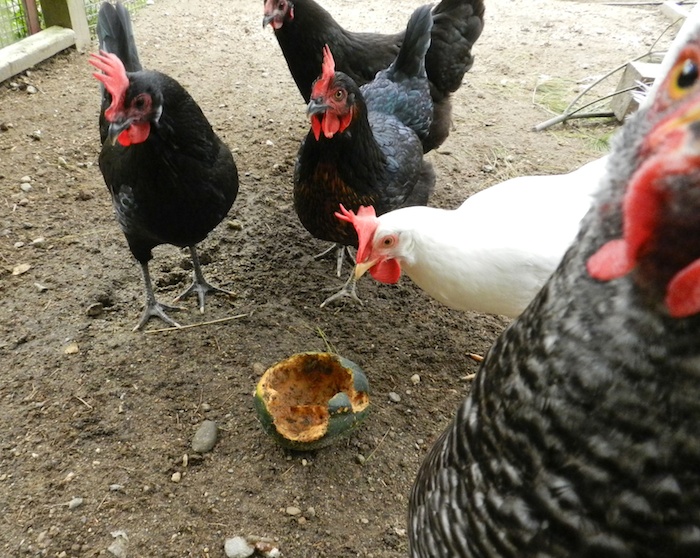 I’ve more work to do before I’ve got the squash bug infestation under control. I’ve learned my lesson that you can only ignore a garden for so long until the neglect catches up with you. But, with gardening, a failure in one corner doesn’t mean a failure everywhere. Last night friends came for Rosh Hashanah dinner. Side-dishes included honeyed carrots, tomato, cucumber and basil salad, chard with a dressing of lemon juice and toasted mustard and coriander seeds, and rice with minced herbs. All from the garden.