Over the years I’ve seen many sick chickens. You can divide the ailments into respiratory and other. Respiratory disease can spread quickly through your flock. It can be lethal.  You’ll find a lot of erroneous information online about how to determine which pathogen has caused the outbreak; there is no way of telling without expensive lab tests. I know, because I’ve gone that route. Unless you are a professional farmer, it doesn’t make much difference to know what germs are causing your hens to wheeze and go listless. The treatment is the same. Antibiotics can often stem the tide, as I detailed here.

That other category covers everything from cancer, to fatty liver disease, to internal laying. Once again, it’s sheer guesswork to try to deduce the underlying cause of your hen’s symptoms. Once again, almost everything you read online is wrong. A chicken has only so many ways of looking ill, and that penguin stance, the listlessness, the dark comb, can be caused by any number of very different ailments.

Sometimes those symptoms don’t point to a lethal disease. Sometimes a chicken simply needs to get their internal systems moving. Maybe her mineral balance is out of whack. Maybe an egg is taking too long to move along the repro tract. Maybe her digestion has stalled. In those cases, my Spa Treatment will put things to right. You’ll still only be guessing about the root cause, but at least your hen will get some relief. If the Spa Treatment doesn’t work, and your chicken dies, it’s still all guesswork as to the cause unless you do a necropsy.

Some states allow you to send a dead chicken to their labs to be examined, but this service is meant for professional farmers. If everyone with backyard chickens sent their deceased birds in, it would bankrupt the programs. In any event, my state doesn’t offer this option. My own vet doesn’t do necropsies, either. In the past, if I wanted to know why a chicken died, I’d have to pay to ship it out of state. It was prohibitively expensive. I was frustrated with not knowing what my chickens died of. Fortunately, in January of 2010, I was able to attend a necropsy workshop at a poultry show, where I learned how to do this procedure myself. Because it wasn’t prudent to bring diseased birds onto the premises, we practiced on healthy cockerels. So, the workshop taught me the basics, but after doing my first necropsy on a hen from my own flock, it was obvious that a healthy rooster is nothing like an aged laying hen.

I looked for necropsy tutorials. Cornell Veterinary School has put a 4-hour video online. I watched that. State extension services have basic information online, like this fact sheet from Ohio State. I found papers about specific diseases, like this one on kidney damage in commercial layers. I looked through my collection of poultry books. The most useful illustrations were found in the older books, when farmers had small flocks and did the necropsies themselves. 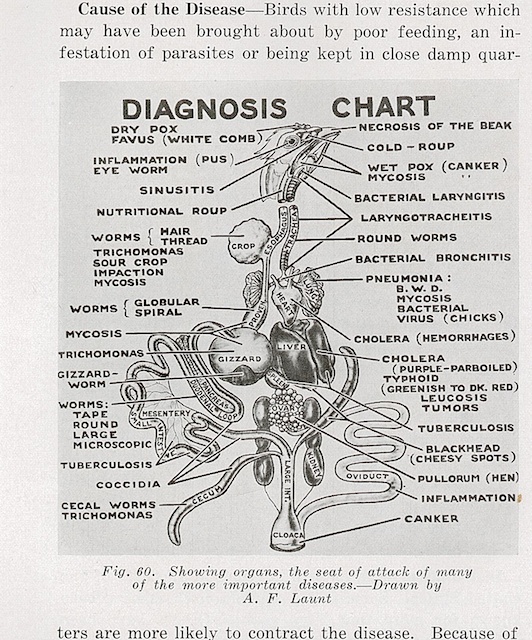 All of this research was helpful, but what I found inside of my old chickens didn’t match the tidy illustrations from the manuals. I contacted a vet in Michigan who does necropsies with the 4-H club kids. I contacted an avian vet in England who is experienced with older backyard birds. I’ve been learning a lot. I’ve done thirteen necropsies. Each time I learn something new. Each time, before I do the necropsy, I think that I have a good sense of what was wrong with the hen. Each time I was wrong. Two chickens, the same age, breed and care, died within a month of each other. They both exhibited the same symptoms. But, what I found inside was not at all the same.

What I can tell you is that by the time a chicken dies, her internal organs are a mess. I’ve seen ovarian cancer, tumors and blocked guts. I’ve seen masses of solidified eggs in the body cavity, infected fluid, and a heart that looked like jelly. It is astounding what a diseased chicken can live with before she shows signs of illness. I’ve come to believe that by the time I see her standing hunched and miserable, that things have been going wrong inside of her for a long time. This is why, if a hen is not eating on her own, that I don’t feed her with a syringe, or baby her with gruel. Or, If she has fluid in the body cavity, I know that there’s an underlying disease causing it and I’m not going to drain her and keep her around for a few more months. I’ve come to know that when a hen can’t eat, that she is suffering. If she is listless in a corner, then she is suffering. I’ve come to believe in the kindness of euthanizing.

Doing the necropsies has taught me more than I’d ever hope to learn from a book or a video. Doing them has certainly taught me that most of the amateur diagnoses out there (for example, “she’s egg bound”) are just plain wrong. This doesn’t mean that you, too, have to do necropsies. Knowing the cause doesn’t change the outcome. (The only exceptions are the increasing number of hens dying of fatty liver disease because  of overfeeding scratch corn, and the hens dying of kidney disease due to overfeeding of meal worms. Read about feeding here.) However, the knowledge that I gain from the necropsies makes me a better chicken keeper. Telling you about what I find in the necropsies helps everyone.

If you do home necropsies, have taken a necropsy workshop, or found a good source of information, let me know. There’s much more to learn.