The rabbit hutch was old, and this past week of high humidity and heat finally did it in. Ants were using it as a highway, and earwigs moved into the hay. Everyday I replaced the hay and everyday the insects returned. Phoebe let me know that she had no intention of going into the hutch unless forced. I didn’t blame her.

The old rabbit house was thrown out and replaced with a clean, dry and comfy (or so I thought) newer hutch. The chickens checked it out and declared it excellent. 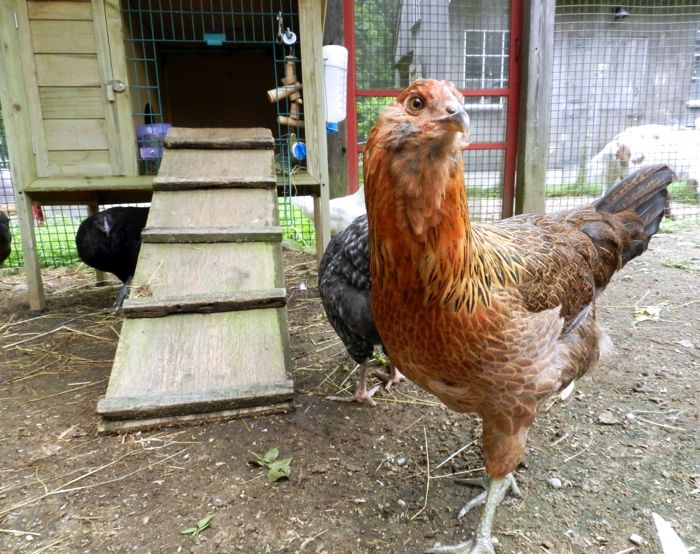 Ancient Twinkydink said that it was about time that she was given a ramp into a nesting box. She’s now laying an egg in there every three days. Not bad for an 8-year old hen! 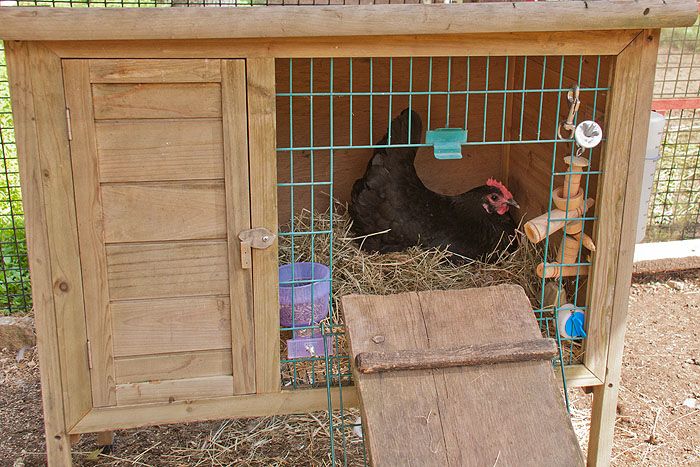 Phoebe said, The chickens are welcome to it! She saw no reason to go into the hutch during the day. Rabbit pellets are uninteresting to her compared to what else can be found. There’s usually greens and woody things to chew on in the compost pile. 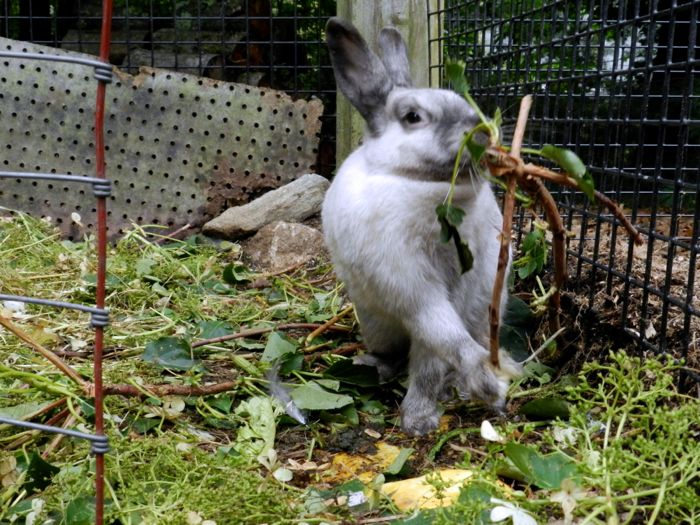 Inside are more greens in the treat holder. 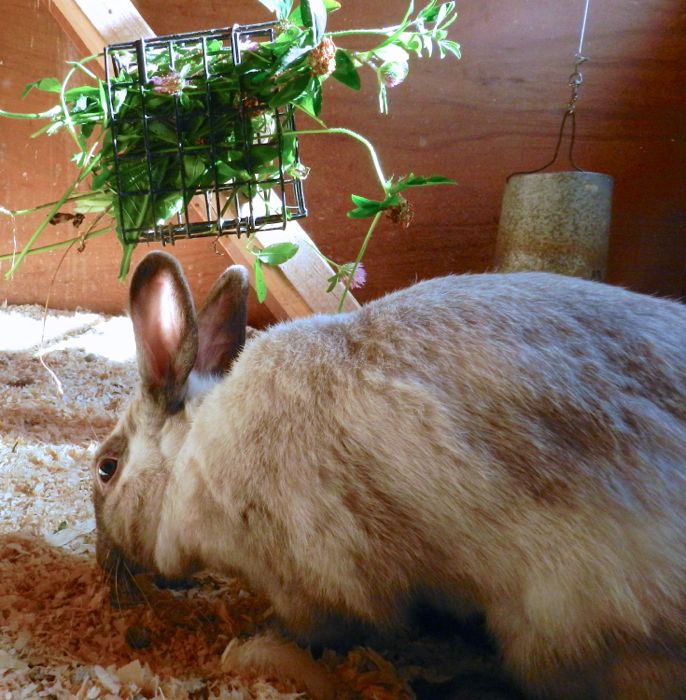 There’s room to run, which gets the goats going, too. 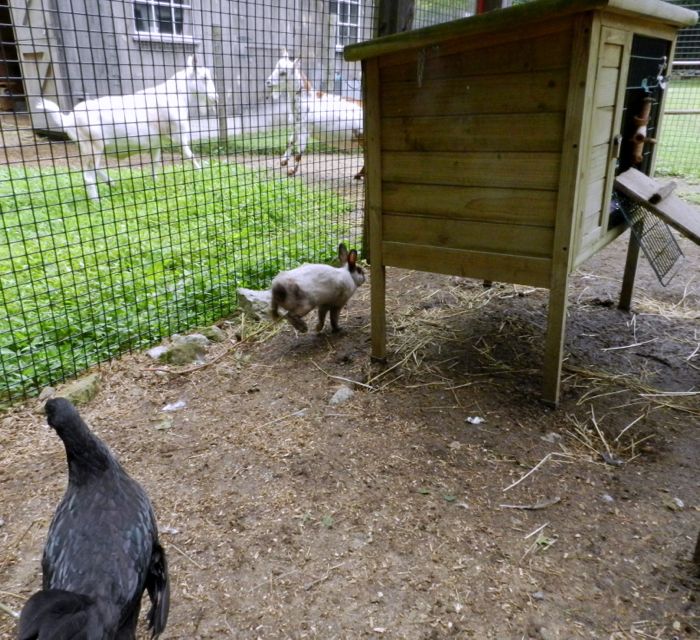 Like Candy did, Phoebe uses the corner of the pen as a litter box. Bunnies are tidy. (The goats and chickens could learn something from her!) 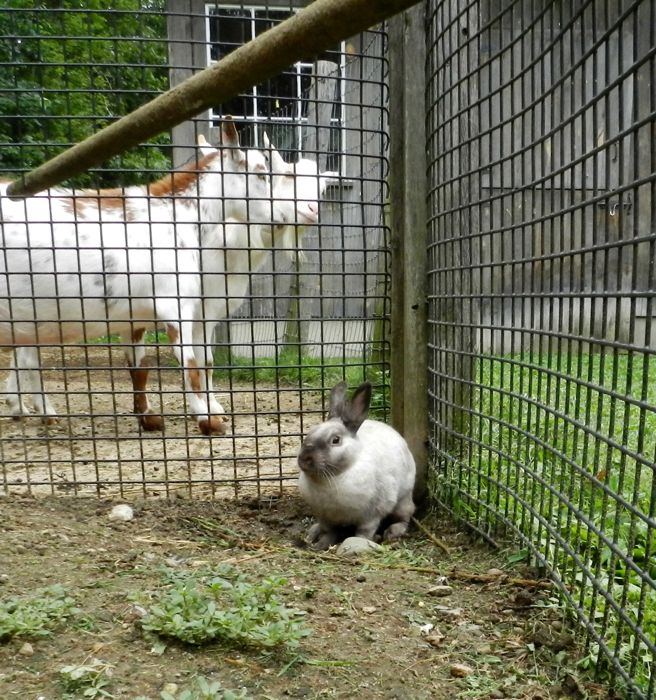 It’s been hot and humid, and the concrete floor of the coop is cooling. Phoebe found the perfect spot underneath the nesting boxes. She convinced Buffy to vacate the premises, and none of the other hens think to bother her there. There’s plenty of room to sit up and groom. 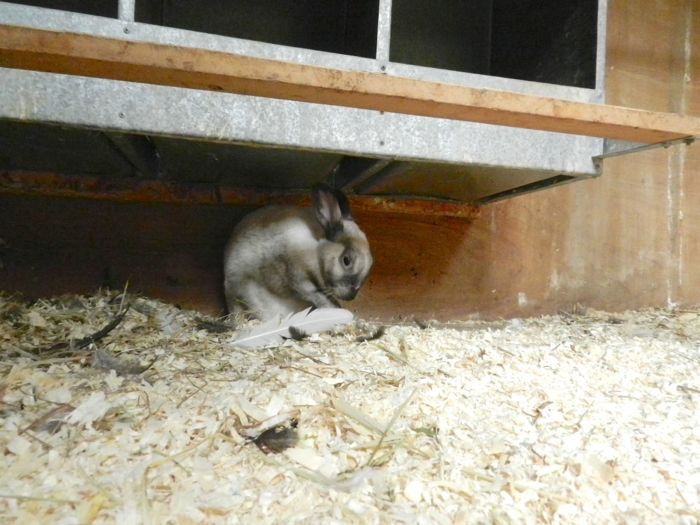 She’s moved the shavings to the side so that she can stretch out and stay cool. 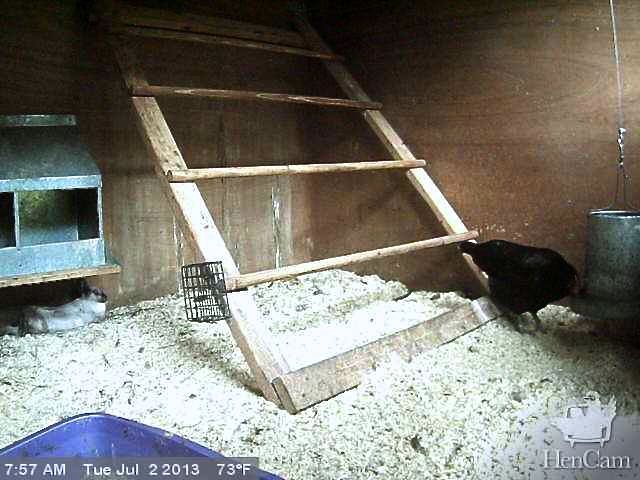 Letting Phoebe making use of the full coop and run during the day is fine with me, but I wanted her to sleep in the hutch at night. I didn’t want her on the floor with the chicken manure. I worried that in the morning, when all of the chickens came off of the roosts, that it would be too crowded and that she’d be subject to pecking. I wanted her in her hutch, where she’d have hay to eat at night (rabbits stay busy in the dark.) But, those are all of my worries and wants. Phoebe didn’t share them. She wants to sleep on the concrete floor. She likes the company of the hens. She likes the hubbub in the coop in the morning. I listened to her arguments (for a silent rabbit, she’s quite clear in her communication) but was still not entirely convinced. Then my son pointed out that the mosquitos were bothering her at night in the hutch, but that they weren’t in the coop (the hens eat them.) Phoebe had made her choice, and finally I was fine with it. She can sleep in the coop. I’ll leave the hutch in the run. It’s a good place for her food and hay. Who knows, maybe she’ll decide that in the winter the concrete floor is too cold and she’ll move in. I’ll be listening to her. She’s a smart rabbit.