Early on, I knew that I’d be keeping one of the Cuckoo Marans, and also the dark Blue Andalusian. The Andalusian is an inquisitive and bold chicken. She’s a tad too fast on her feet and flighty for the nursing home, but I have a soft spot for curious and out-going chickens, and I love the look of her grey feathers. Of the two Marans, one was obviously the calmer and friendlier, and I tagged her quickly as a nursing home hen, but her sister is a nice bird, and her eggs will be dark chocolate in color (alas, not truly chocolate inside) so I’ve decided to add her to my flock as well. 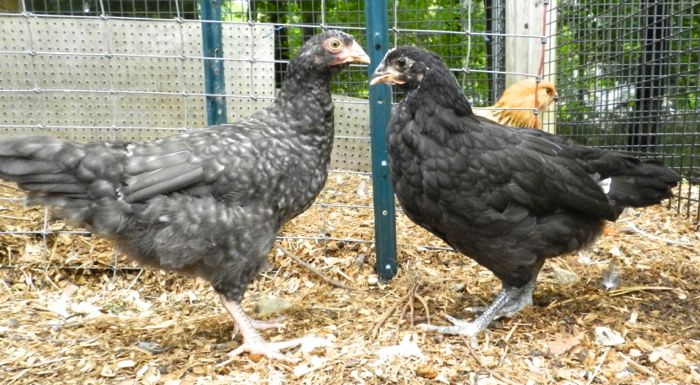 The other Andalusian female is light grey. It’s not exactly what is termed “splash,” but more of a pale wash. Neither of the two Andalusians have plumage that is show quality. The dark one has white splotches on her face and the light one is too white. But, they’re active, they get along well with each other and others, and they look quite pretty together. I’ve decided to keep both. 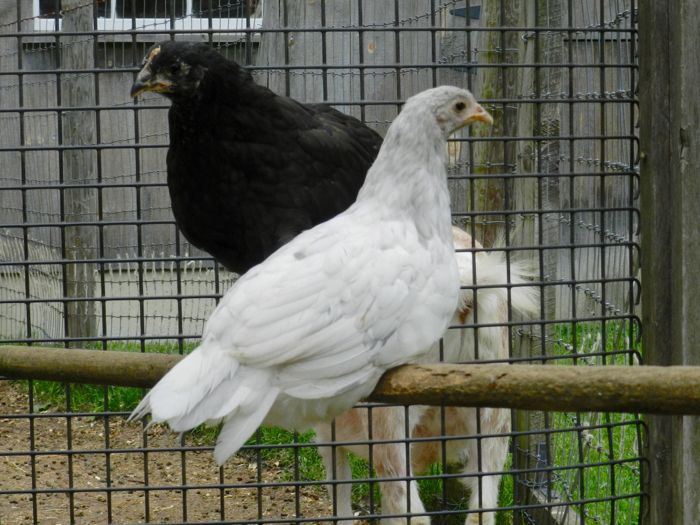 The third Andalusian in the box of chicks turned out to be a boy. 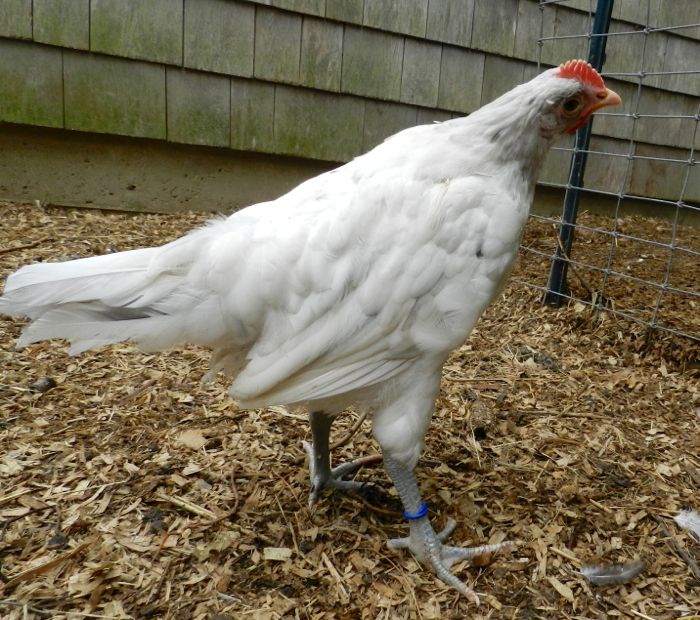 Mr. Grumpy has a quiet temperament. Although there is no bullying in the flock, he does appear, well, hen-pecked. Subdued. He’s easy to handle and, as of yet, no trouble. But he never, ever looks cheerful. He’s not of show quality, but has no defects, either. He would be a good addition to a backyard free-ranging flock that needs a rooster to warn the girls of danger. There’s no place here for him, and in truth, there are few places for roosters anywhere. Even if everyone who kept backyard chickens kept roos, only one boy should be housed with every ten hens. Since half of all eggs hatched are male, there’s obviously a huge disparity between available homes and the quantity of roosters. Many male chicks are killed right after hatching and others are destined for slaughter by 14 weeks of age. This is the hard truth of keeping backyard chickens. I know that this upsets many of my readers, but I am okay with it. I’m not a vegetarian. I believe there’s a place for humanely raised meat on the table. I buy beef, pork and chicken from farmers in nearby towns. If Mr. Grumpy was a different breed, I might even keep him awhile longer and harvest him for soup. I’ve never had to do that, but I would. However, Andalusians are scrawny, and no amount of feeding will give him heft. Processing a chicken is messy and unpleasant work. I’d rather not do it, especially when there’s so little to gain.

I have one more week to find him a home. Any takers? I’m willing to sell the light Andalusian to go with him as a breeding pair. If I can’t find him a place, there’s a poultry dealer in the next town over that takes roosters in for resale. With any luck, Mr. Grumpy will find a flock of his own. If not, he’s already lived a better life than most cockerels.

Meanwhile, now that I’ve decided which pullets to keep, I need to come up with names. Any suggestions for the two Andalusians and the Cuckoo Maran?