When chicks hatch, they still have some yolk remaining inside of them. This can provide them with nutrients and water for the first few days of life, which is why chicks can be shipped in boxes through the mail. As soon as they arrive home they need to be fed and watered. (To see how this is done, see this post.)

The bulk of a chick’s diet should come from commercial feed formulated specifically for them. Chick feed differs from laying hen ration in several important ways. First of all, it is in the form of crumbles, which, being smaller, is easier for chicks to peck and swallow. (Some people feed crumbles to adult hens, but I think it wasteful, as much gets tossed onto the ground where it becomes inedible dust.) Secondly, chick feed is higher in protein, around 18% versus 14 to 16% in laying hen pellets. Lastly, and of the greatest importance, chick feed is low in calcium. Mature birds eat laying hen pellets formulated with calcium because that mineral is necessary to create eggs. What’s good for layers is not good for chicks. Chicks fed a ration with calcium will develop kidney disease. Although chicks can’t eat layer pellets, older birds can eat chick feed. So, if you have chicks in with a flock of adult birds, they should all eat chick crumbles. Calcium can be provided to the mature hens’ diet by offering crushed oyster shell in a dispenser out of reach of the little ones. The higher protein content of the chick feed won’t harm the older hens over the short time that it takes for the chicks to mature.

Chick feed comes plain or medicated. Although chicks in large production facilities are fed sub-therapeautic antibiotics, the bags of feed sold to backyard keepers don’t have those drugs in them. Rather, the “medication” refers to a coccidiostat that kills a lethal protozoa. Not all backyards harbor coccidia, but if yours does, the chicks might get bloody diarrhea and die. Some people wait until there is a sign of the ailment before treating the flock with a coccidiostat. Other chicken keepers routinely offer a medicated ration as a preventative measure. Some, like myself, get chicks vaccinated for coccidia. If your chicks are vaccinated for coccidia, then you cannot use medicated feed. (This is for the coccidia vaccine. If your chicks are vaccinated only for Marek’s disease, you can feed a coccidiostat.) 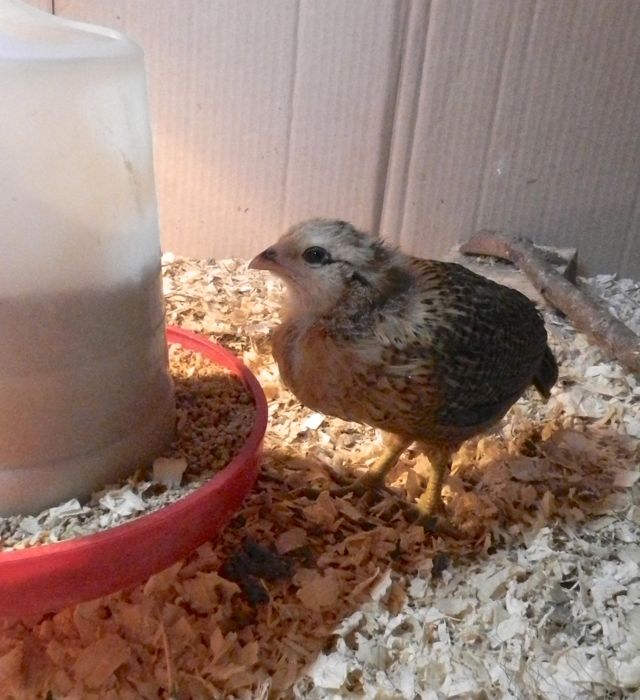 Feed your young birds a starter ration until they reach point of lay, about sixteen to eighteen weeks of age. At that point they will do better on a lower protein ration, and their systems can handle the calcium. Do not feed chicks that are destined to be laying hens a “finish ration” or a “show and grow.” These products are designed for meat birds, and put weight on fast. Not only is the protein and fat content wrong for layers, but a few companies do put antibiotics into them.

Buying a 50 pound bag of chick feed might seem like too much. However, each chick will eat up to 4 pounds of crumbles in the first ten weeks. As they get older, they eat more, so by the time they are at point of lay they’ve eaten around 10 pounds of crumbles. If your chickens free-range, they’ll eat a bit less of the commercial ration. But, if I go by these numbers, conservatively my 26 chicks will eat 260 pounds of chick feed on their way to becoming laying hens. (By the way, a 50 pound bag of feed costs about $18, or 36¢ per pound.)

Chick feed and clean water are not the only things that chicks should be consuming. In tomorrow’s post I’ll tell you about grit and probiotics. Also, like mature hens, chicks do best with a varied diet beyond the commercial ration. I’ll be talking about treats, greens and bugs soon, too.