Little fluffy chicks need help staying warm. Their downy feathers aren’t good insulation. A cold wind goes right through them. A mama hen provides protection under her thick coat and next to her warm skin. But, chicks don’t stay under the hen all day. They venture out and about. In nature, most sensible hens hatch their chicks late in the springtime when the weather has warmed up. Still, weather is variable, and the chicks, even just a few days old, experience a range of temperatures.

Those of us who order chicks through the mail keep our babies warm with a heat lamp in a protected box called a brooder. The rule of thumb is that the first week the brooder should be at 95 degrees F. Each week thereafter the temp is dropped (by raising the lamp up) by 5 degrees. But in reality, it’s more complicated than that. Chicks can easily get overheated, especially if you have only a few babies in a small plastic carton. Last year I heard from two different people whose chicks were dying. I finally figured out that they were too hot. Instead of judging if the temperature is right using a thermometer, use the chick’s behavior as a guide. To do  this, there must be enough room in the brooder for the chicks to get out from under the heat lamp! There should be shadowy, cooler areas.

Comfortable chicks are evenly spaced. They are generally quiet. If there’s a lot of high-pitched cheeping, they’re distressed. These chicks are just right. 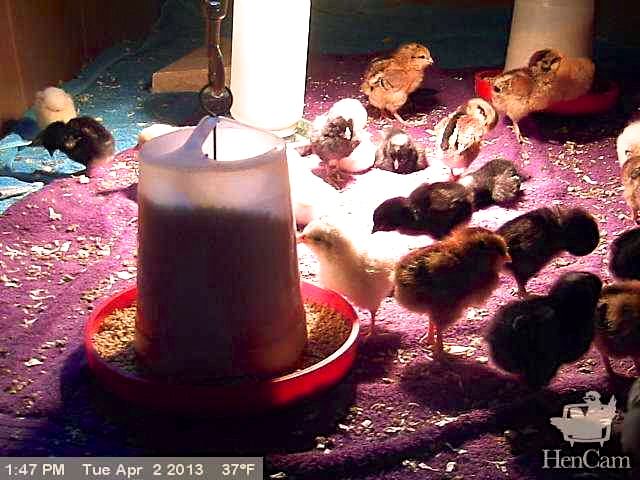 Chicks will go from very active to asleep in a blink of an eye. Sometimes, they fall asleep in mid-step! They sleep near each other but not piled up. 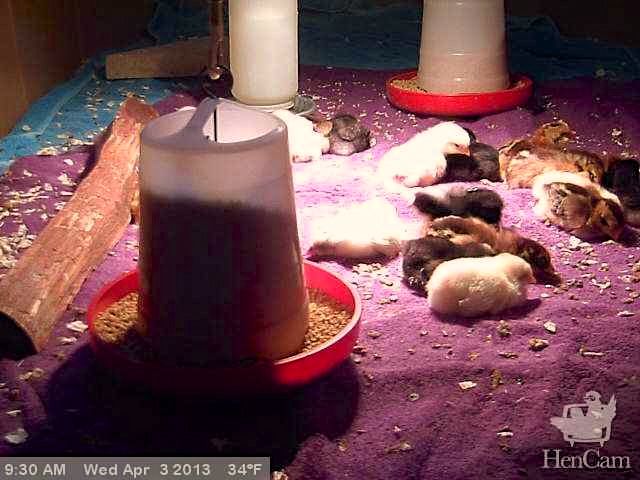 If it’s too cold, they’ll huddle directly under the heat lamp. It got down to about 20 degrees last night. The air in the shadows was quite chilly, but the chicks were fine under the lamp. I could tell that they were okay because there’s still some space between them, and they were quiet. 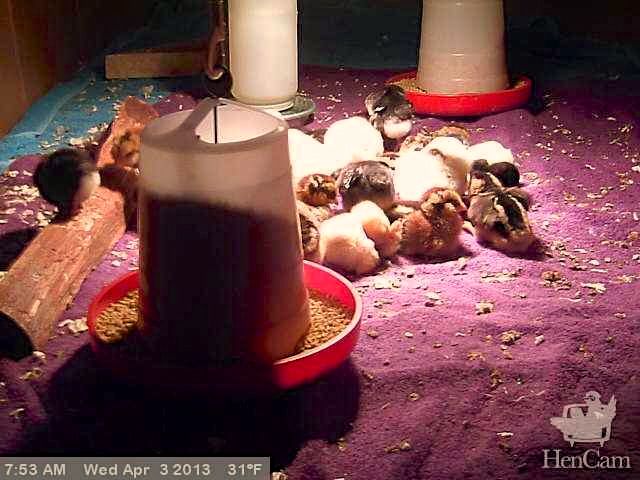 If they’re too warm, they’ll move away from the lamp. Here they’re keeping their butts warm, and their heads in the shadows. 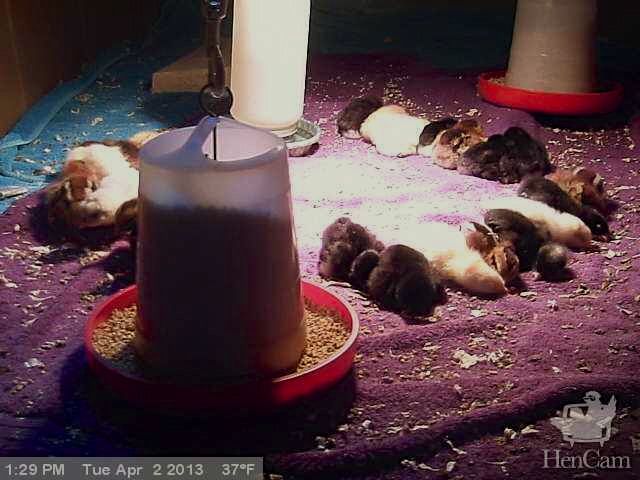 They look like a group of Brownie Scouts around a campfire. I’m waiting for them to burst into a version of Kumbaya. If the chicks entirely avoided going directly under the heat lamp, I’d raise it up a notch, but as I watched them, they finished their naps and hurried hither yon, under the lamp, and drank and ate. The chicks were able to regulate their body temperature by moving around the brooder.

Taking good care of the chicks is all about paying attention. Of course, that means that I have to spend time watching the chicks, which is about the best excuse ever to procrastinate from my work.