Yesterday afternoon Candy looked fine, she had spent the day as always, visiting with the hens, talking to the goats, sprawling on the snow, and basically lording it over the backyard animal community. I brought her a carrot, which she ate. But, at bedtime she did not eat her banana chips. Something was very wrong. We brought her inside to keep an eye on her, but there was nothing more to be done. She died peacefully early this morning. 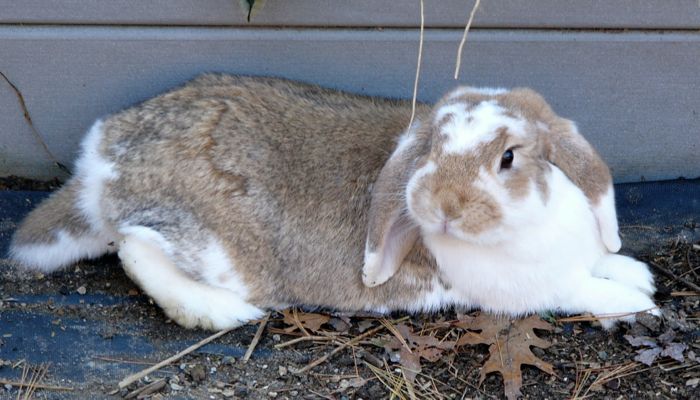 Candy, at the age of one.

Candy was such a vibrant personality that, day to day, it was hard to remember how very old she was. Intellectually, I had expected that at some point this year that she would succumb to old age. But, it still came as a heart-wrenching surprise. In a way I’m grateful that it happened as it did, quickly and without suffering.

In the summer of 2004, I took my seven year-old son to the local pet store to get him a rabbit. His beloved bunny, Spot, had recently died and he was bereft. Spot had been a house bunny, or, more specifically, my son’s bedroom bunny. Spot didn’t like anyone other than his boy. My son has a way with rabbits. At the pet store, there were a dozen young bunnies to choose from. I picked up a sweet, cuddly spotted one. My son wasn’t interested. He pointed to Candy and said, “that one.” I picked up Candy. She was clearly annoyed. I said, “I don’t think so. This one is not going to be easy.” He said, “I want that one.” And so Candy came home with us.

She spent a year in my son’s bedroom, and then we thought to put her outside with the chickens. Candy immediately became the Empress of the Barnyard. My vet visited a couple of years ago and said that Candy was the happiest and healthiest rabbit he had ever seen (and he loves rabbits).

Candy was demanding. Heaven forbid that I was late to let her out of her hutch in the morning! She’d ring her bell and make a ruckus. Candy had rules. Hens were not allowed in her hutch (unless invited in). She was to be fed two (not one) banana chips at bedtime. On dreary days she got to sit in the sand-filled dust bath in the coop, not the hens. And yet, she had this centered, calm, zen-like personality. The chickens would be squawking and carrying-on around her, and she’d be sitting statue-still, as if meditating. I think she was.

Candy would have been nine years old this March. She was a very old bunny. She had a very good life. She will be greatly missed.

It will warm up enough to bury her under the peach tree today.

I will get another rabbit, when and what breed I don’t know yet. Today I’m just thinking of Candy. I expect that a lot of you will be as sad as I am to say good-bye to her. I welcome your comments and memories, but you’ll understand that I’m not up to responding. I have barn chores to do today, which is good, as that’s where I need to be when I’m sad. But, I’ll miss Candy’s supervision.