We all want a year round supply of eggs from our hens. But, despite the unchanging and abundant display at the supermarket, the backyard chicken keeper soon learns that eggs are seasonal. Chickens start and stop laying for many, many reasons. One of them is the amount of daylight. The optimum amount of light to stimulate laying is 14 hours. Today, here in New England, we’re getting just under ten hours daily, and that will dip further to under 9 at the winter solstice in December. (This nifty site calculates the amount of daylight in your latitude.) Factory egg production facilities get around this natural fluctuation by housing chickens in windowless buildings illuminated with artificial lights. LIghtbulbs works for them, but it’s not always the right choice for backyard chickens. I don’t light my coops, and I’ll explain why.

Right about now, in late fall, there are a lot of people new to chicken keeping who are anxiously waiting for their young chickens (called pullets) to start laying. They got chicks in the summer and haven’t found an egg yet. Depending on the breed, you won’t see the first egg until 22 to 26 weeks of age, which is usually October or into November. But, that’s when reduced daylight is signaling the pullet to slow down. So, to egg on their pullets (pun intended, sorry!) some chicken keepers keep a light on in their coops. That’s not necessarily a good idea. The University of Maine (where they know firsthand about dark and cold) says that encouraging early maturity with lighting can cause prolapse. Also, A second negative effect associated with early sexual maturity is small egg size. Birds that lay early may never reach their genetic potential in terms of egg weight. And finally, if pullets are stimulated to lay before 17 or 18 weeks, their lifetime egg output may suffer. So, wait to hang a light until after your chickens are consistently laying normal eggs.

In my experience, pullets lay through the winter without additional light. But, one reason that I have had that success is because I designed my chicken housing to have plenty of windows. The Gem’s first winter was a snowy one, and I couldn’t even shovel out their pop-door to let them outside. If they’d been stuck in a small dark coop, they would not have laid an egg. But light streamed in the windows. They had sunny patches to loll in. They laid eggs all winter. 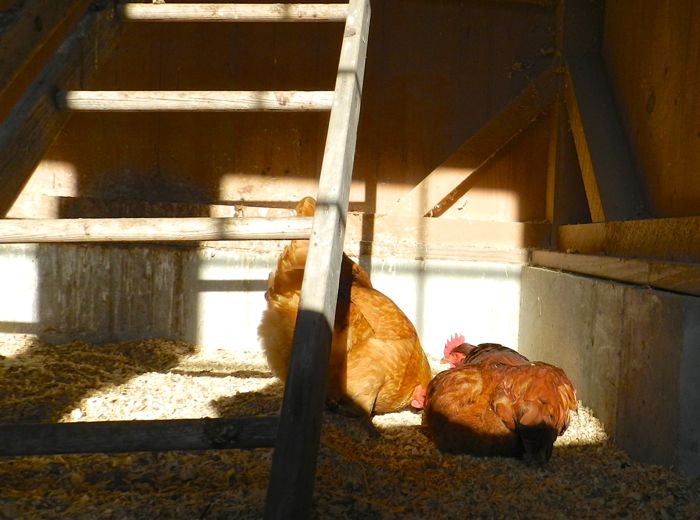 By their second winter, most hens are about 18 months old and so they are all at some stage of the molt. The molt takes up to 8 weeks to complete. During that time they stop laying. It doesn’t speed things up to add a light, and it won’t bring on more eggs. Later in the winter you can stimulate more egg production with a light, but you still won’t get as many eggs as you do in the summer. That might not be a bad thing. Back in 1923, A University of Illinois Agriculture College bulletin warned: Care should be taken not to overstimulate the hens by the use of artificial lights. A production of more than forty eggs daily from each hundred hens during the winter months may be disastrous in that it may result in a spring molt. Molting is a sign of stress, and it makes sense that forcing egg production during the winter, which is a time of rest and rejuvenation for chickens, would cause issues.

Over the years I’ve tried hanging a lightbulb in the coop to increase winter egg production. I’m sure it’s worth it on a large scale – if you have 100 hens, it will make a difference to your bottom line and pay for the electricity. It also works if you have hens under two years of age; in a backyard flock of six birds you might go from collecting one egg per day to three. But, if you have older hens like I do, the added light won’t make a difference. They’re going to take a break no matter what.

If you do decide to use light in winter, (definitely an option if your coop doesn’t have windows) then there’s a few things to know. A 40 or 60 watt bulb is plenty. Worry about fire. Periodically inspect the wires for gnawing by mice, and dust off the bulb. Do not leave it on all night, as it’s been shown that constant light is detrimental (the girls need their rest!) Put it on a timer and have it turn on in the early morning hours. Don’t have it turn on after dusk and then turn off to suddenly plunge the chickens into darkness in the middle of the night – chickens do not have any night vision and they’ll be stuck on the floor of the coop, unable to make it up onto their roosts.

The 1923 booklet did have this advice: The more exercise a hen takes, generally speaking, the more eggs she will lay. An additional benefit of exercise in the winter is that getting the hens outside means that they’ll also be in the sunshine. Chickens don’t mind cold temperatures (see my FAQ on winter care), 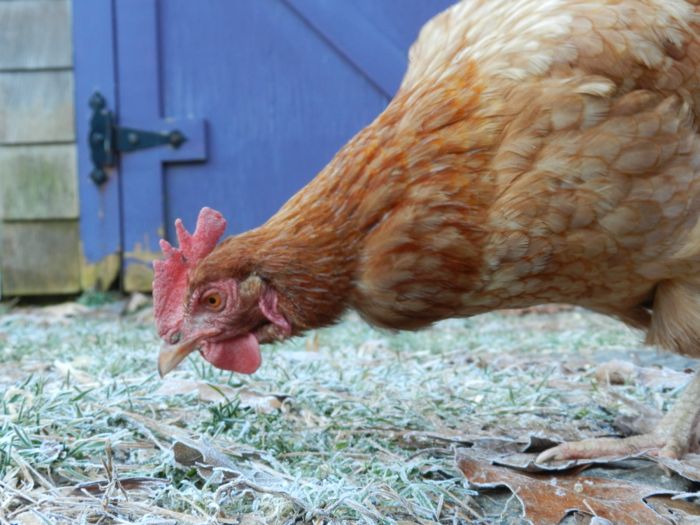 and, actually, they rather like how all of that frosty ground sparkles. So, give them as much natural sunshine as you can. Use your judgement about adding a lightbulb if your housing keeps them in the dark for long stretches. And don’t expect an egg everyday.