Pip had a bellyache last night. Since a goat has four stomachs, that can be a lot of ache. The largest stomach (technically there’s only one stomach with four compartments, but everyone calls them stomachs) is the rumen. The rumen is like an expandable pouch. It’s where all of the bulky, grassy, thorny, leafy, barky things that goats eats are stored. It’s amazing the quantity of feed that can fit in there. Sometimes Pip eats so much that his left side (where the rumen is) sticks out in a lopsided way. Counterintuitively, an asymmetrical, bulky belly is a sign of a healthy goat. Bacteria in the rumen break down the tough matter. The goats regurgitate clumps of it and grind it with their teeth. That’s called chewing their cud. The goats burp. A lot. Burping is another sign of a healthy goat. Eventually it all goes back through the stomachs and on through the twists and turns of the digestive tract and comes out either as pee or as “goat berries.”

Last night Pip was not burping. He stood with his back roached (think curved like a Halloween cat.) His stomachs weren’t gurgling. He wasn’t chewing his cud. He didn’t want to eat. He looked wretched and you could tell that he felt very sorry for himself. I called the vet, who recommended dosing with an item that all goat-keepers have in their first aid boxes: Pepto-Bismol. 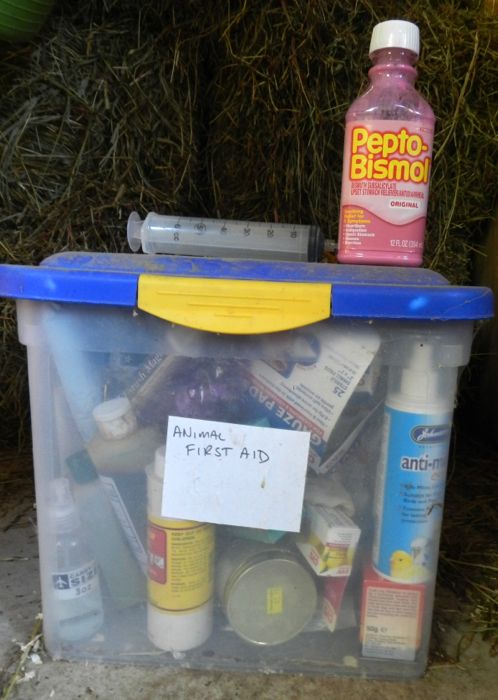 I gave Pip an ounce. He peed and pooped within the hour. By midnight he was chewing his cud. This morning at 5 am I heard him burp. He got another dose at 9 am. And that’s why Pip has a pink beard. 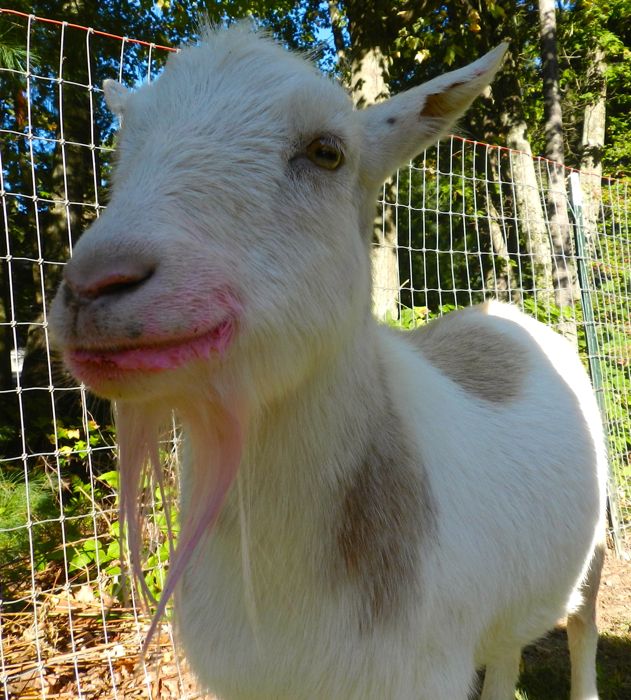 It’s hard to get Pepto-Bismol pink off of a goat’s beard. It’s rather like in The Cat in the Hat Comes Back. In the book the pink spot moves on through the house, all the while getting larger and larger. In the barn the pink gets on my boots, on Caper, and on the stall door. 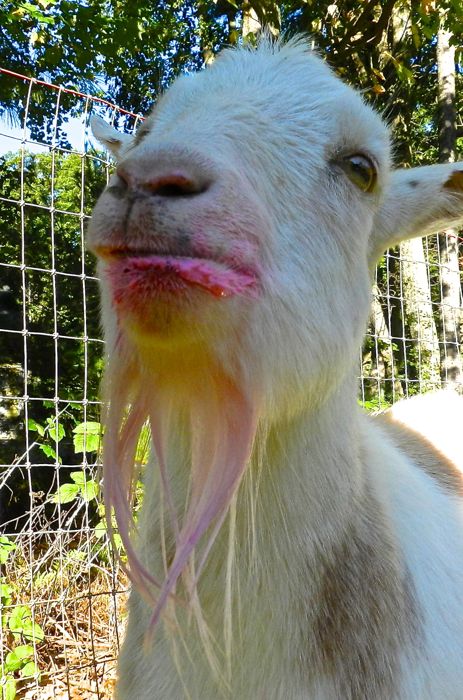 This is my first time treating goat bloat. I think that it came on because I moved the pasture fence and the boys had access to lots more greens. Perhaps there’s a toxic weed out there. At the same time, I gave him less hay in the morning, so he was eating all of those greens on an empty (for a goat) stomach(s). I provide goat minerals a couple of times a week; because of this experience I’ll finally build and put in a goat-proof mineral feeder so that he can have them free choice. Any experienced goat keepers want to chime in?