Chickens love to eat. They’ll let you know that they are going to waste away if they aren’t fed right now and that an hour without a treat is a hardship. The truth is that they can go for days without food and recover just fine. What they can’t do without is water. Manure is 75% water. Egg whites are 90% water. Laying hens need to stay hydrated in order for their body processes to work. When it’s hot in the summer and the only water is in the sweltering coop, the hens won’t go inside to drink and they’ll suffer. It’s not only during times of high temperatures that you have to worry about keeping the waterers filled. Ignore the fount in the winter so that it freezes and assume they’ll be fine eating snow and your hens will be dead in two days.

I started out using plastic waterers, with the red screw-on bottoms. They’re fine for small flocks. But, they have their drawbacks. When almost empty the plastic dispenser is easy to tip over. The top is flat, so there’s always one bird that tries to roost on it. I don’t have running water in my barns in the winter, and so have to fill the waterer inside the house. Several times, carrying the plastic one out to the coop, the bottom popped off and splashed freezing cold water on me. I switched to the metal fount, which holds more water and is much easier to carry. Whichever type you use, you have to keep it from freezing solid. If you have electricity in the coop, use a heated base. For years my coop did not have power and so on the coldest of winter days I’d have to go out several times daily to swap frozen waterers for fresh. It is not enough to leave water early in the morning, and then replace the frozen dispenser with a fresh one at night. Chickens don’t drink after dark.

Even in the summer I keep the waterer raised up on the electric heater base (unplugged) to keep the water from getting bedding and manure in it. Notice that the electric cord is covered with a protective conduit. This is to keep Candy from chewing through the wire. But, a conduit is also a good idea in a barn that doesn’t have a rabbit, as mice gnaw wires and can potentially cause fires. 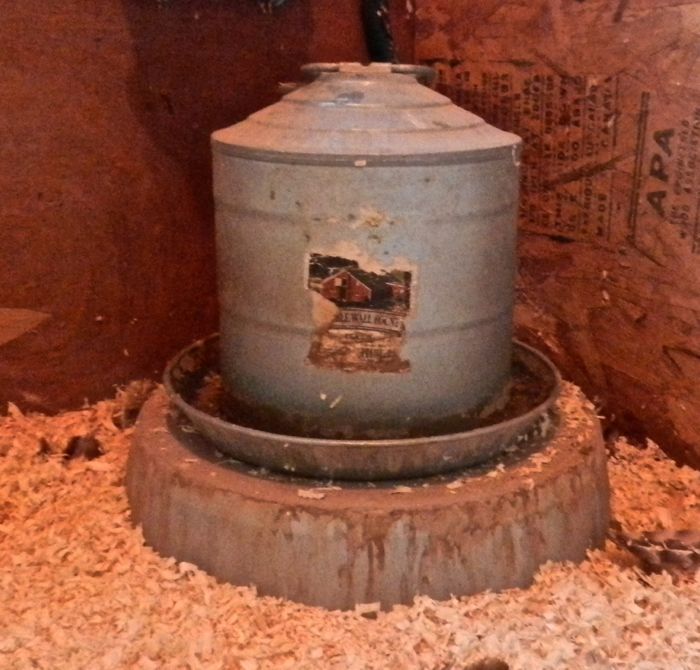 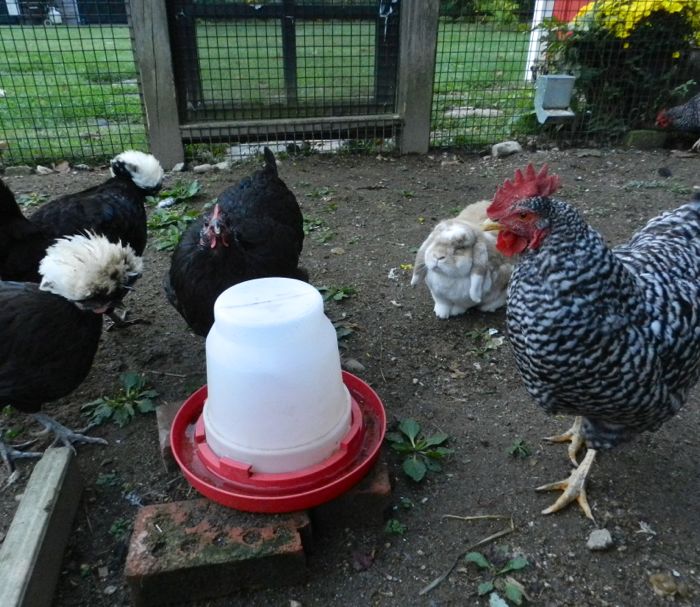 Given their druthers, the girls prefer their water outside. I keep this fount filled until the temperature drops to freezing. Every few days it gets refilled. Even Candy likes drinking from it. Note that it’s up on bricks to keep it clean. An added bonus is that every once in awhile I move the base and the hens have a feast on worms that live underneath it.

The Big Barn houses the twelve large, young and active Gems. They, too, prefer to drink outside, but a small plastic waterer won’t do. This large one is awkward (and the gasket breaks) but it holds enough so that in the worst of the summer heat I only I have to refill it every four days or so. The Gems have a galvanized waterer inside of the coop, too, that I keep cleaned and filled. 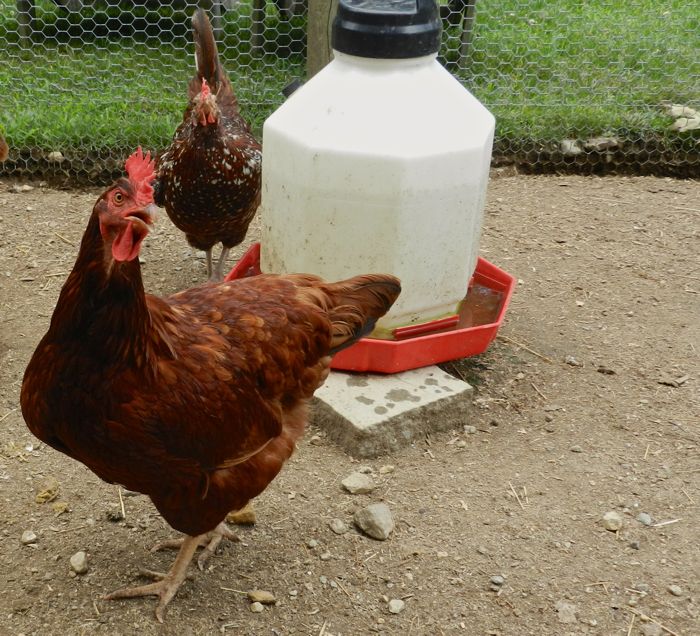 Every time I fill a waterer, I take a scrub brush to it. Despite the fact that chickens love to drink from mucky mud puddles, I want the water that I give them to be clean! (The one in the photo is due to be cleaned and refilled.) Water dispensers, especially in the summer, are prone to hosting algae blooms. If that is a problem, a splash of apple cider vinegar in the fount keeps the water clear.  (Only put vinegar in plastic containers as it will cause the metal ones to rust.) However, I don’t routinely add apple cider vinegar in a large enough quantity to be a tonic because I prefer to reserve it when needed medicinally.