I have a progressive, neural hearing loss, which, by the time I turned 50, had become severe. I struggled to understand conversations, felt a step behind (or totally out) of social interactions, and was constantly under stress from not being able to hear. Then, in December of 2010 I had a cochlear implant surgically placed on the left side of my head. It’s a delicate operation which entails drilling a hole in the skull, scraping nerves, carefully avoiding others, and threading a squiggly array of electrodes into my cochlea. A month after implantation, the device was turned on and my world was transformed.

It’s not like putting on a pair of new glasses and all of a sudden being able to see with clarity. I went from being severely hard of hearing to hearing with a CI. I don’t hear “normally.” Everything that I hear comes in through a microphone perched on my left ear, and then the sounds are transmitted into the device inside my skull. My brain has had to make sense of electronic inputs. It’s been working hard to interpret the new sounds, which at first came across as synthesized, but now seem (mostly) natural. It’s an on-going process. Some sounds have become more melodic over time. Bird calls are now birdsong. Voices have become more distinct. I can hear footsteps and my dogs’ toenails clicking on pavement. I can hear the timer on the oven go off – from another room! I can hear children ask questions when I do storytimes.

Because I hear from one side only, I am constantly turning to position my head/microphone to the person I want to hear. Neck pain! Invariably, I miss half of the conversation in a group. Also, I have no idea of where sounds come from. If I hear Steve talking, but don’t see him, for all I know, he could be at one end of the house or the other (I’ve walked into empty rooms trying to find him.) When I’m walking the dog I don’t know if a car is coming at me or from behind. So, for awhile now, I’ve been thinking about getting another CI. Being able to hear all around me and knowing where sounds come from are good reasons for getting another CI, but not enough.

My right ear barely functions. I no longer wear a hearing aid on that side, as even with amplification, voices are unintelligible. Still, I can hear a door slam and a fire alarm go off. When my CI isn’t on (when I’m sleeping or in the shower) it’s good not to be in total deafness. Getting a second CI would destroy that. Ironically, what would allow me to hear even more, would also put me into a silent world. I always thought that I’d wait, and get a second CI when I naturally lost all hearing.

The success of a CI is tied into the flexibility of the brain. Everyone who gets a CI will regain some hearing, but how much will vary from person to person. My CI has been one of the most successful my audiologist has ever seen. One of the reasons for that success is that I was not fully deaf before implantation, and so my brain had never stopped being active and engaged in the listening and interpretation of sounds. However, I can tell that the part of my brain that pays attention to and processes sound from the right side has shut down. The longer I go without using it, the harder it will be to get that grey matter to work when I get a second CI. So, I concluded that if I want to be able to hear from my right side, I have to get another CI sooner rather than later.

Still, how to decide whether to undergo surgery when there are risks to the procedure – including losing my sense of taste and facial paralysis?

There was one more thing to consider and it can’t be quantified. I’ve read that there is a beauty to sound when heard bilaterally. The brain is designed to hear from both sides and when it brings the sounds together it becomes rich. Full. Gorgeous.

So, I might be pushing it – I’m hearing so brilliantly well with the one CI – but today, February 28, I’m going in to have a second CI implanted on my right side. It’ll take a week or more to recover from the surgery, and it’ll be a couple of weeks before it gets turned on. That will be right when the birds are singing their springtime songs. I’ll let you know how they sound. 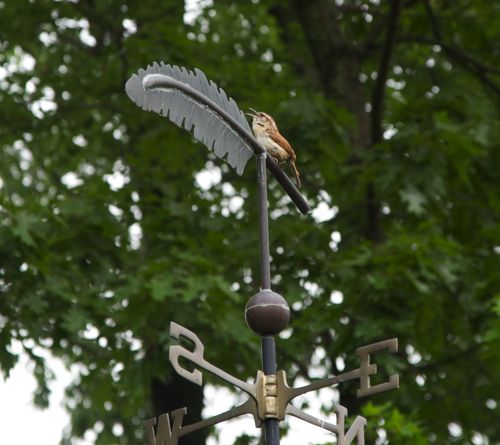 (This weathervane is on my barn. It was purchased here.)