My good friend, Karen Pryor, was wondering if I could do her a favor. Six Red Marbles, a publisher of children’s educational books, was planning an early reader about Karen and they needed photographs of her training animals. Karen was one of the first marine mammal trainers (dolphins and killer whales, etc.) Her book, Don’t Shoot the Dog!, has transformed the world of dog training from dominant based to one that uses positive reinforcement and scientific principles. Her work with zoos has brought enrichment and gentle care to those establishments. (She is currently quite enthused with helping reptile keepers train their crocodiles!) Reaching the Animal Mind, her latest book, is a must read for anyone who interacts with animals of any species – including humans. Anyway, for the children’s book they didn’t need her training anything exotic, but something other than dogs would be good. Could the Six Red Marbles photographer and art director come here for a photoshoot? I practically shouted an enthusiastic yes.

Karen uses a technique sometimes called clicker training. The desired behavior is broken down into very small increments and each step to reach the final goal is marked with a click (usually from a hand-held noise-maker like those toy crickets from dime stores) and then immediately rewarded. It’s like playing the “hot and cold” game, but only saying “you’re getting hotter” and never discouraging with a “cold.” It’s ridiculously fun for the animals and trainers alike. Counter-intuitively, although the behavior is taught in the tiniest of steps, your get what you want far, far quicker than if you hold out for the ultimate trick. When Karen trains an animal, everyone is calm, it almost looks like nothing is happening, but then you realize that the animal has done the desired behavior and wants to know what’s next.

We started with the goats. 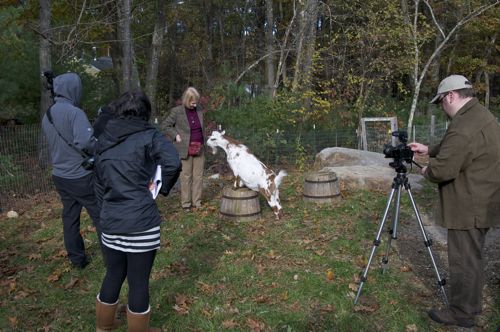 I think that I need to feed Caper less hay. Then, perhaps, he could sprightly jump up onto that barrel instead of do the “hang the belly” trick.

Next, Karen trained Agatha to follow the target (see the wand with the ball on the end?) 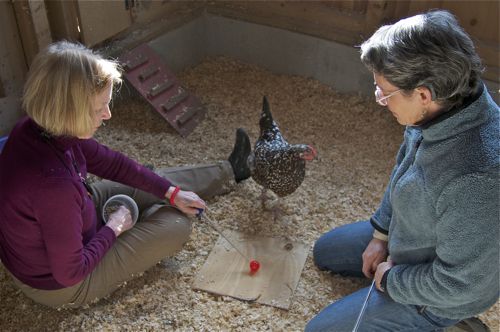 I’d warned Karen that Agatha is a very sweet, but rather placid and dim-witted bird. Karen has trained clams to open and close on cue, so she could certainly train Agatha! Still after a few minutes we switched to Florence, who was less mollusk-like and offered more behaviors, more quickly than Agatha. However, Agatha excels as a lap bird, and is ever so beautiful, and so she had her portrait taken by the photographer who was, I think, rather smitten with her. 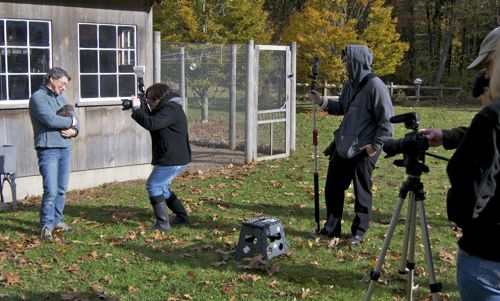 Next, it was time to work with Lily. Lily is eight years old, and I’ve clicker-trained her since I got her as a rescue at the age of six months. I showed off a few of her behaviors, including weaving between my legs and a bow. 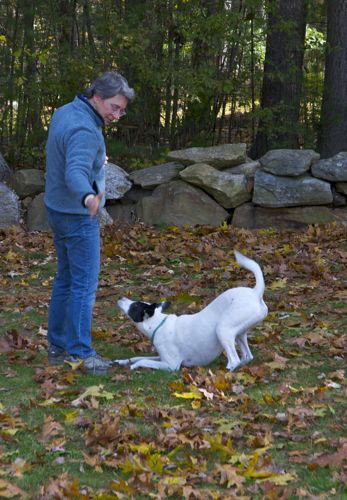 Then it was Karen’s turn. In less than a minute she taught Lily to leap up to the target stick. 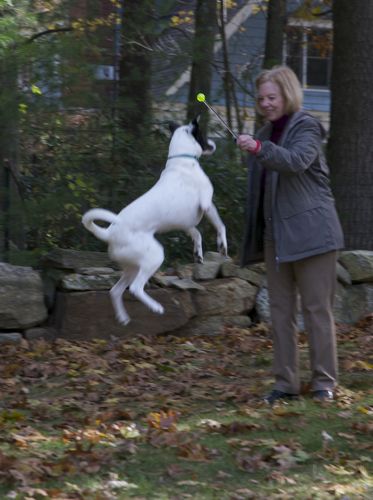 This is the expression of a clicker-trained dog – calm, confident, happy, and ready for more. 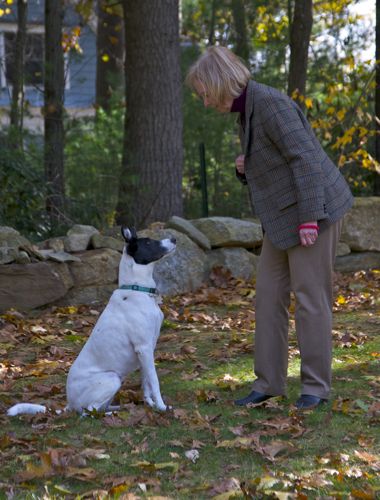 However, Lily is a farm dog, and she took a break to chase some varmints. She has her priorities! 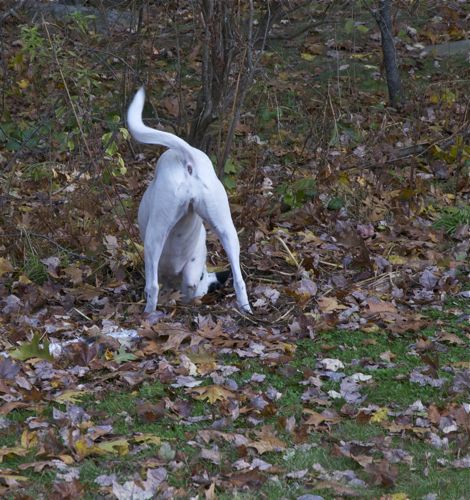 Clicker training can be exhausting. The animals are asked to think and be active participants in the training process. After everyone had left, the goats sat in the sun and chewed their cuds, mulling over the visit. It was quite the satisfying day. 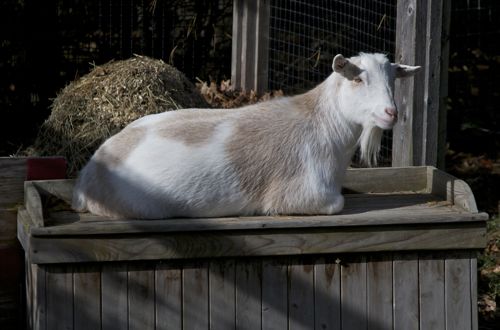