Ten years ago my sons were eight and four years old. We had a small room, not much bigger than a walk-in closet, that we used as the “lego space.” Both boys were avid builders. Those first days, after hearing the news, I sat in the room with my youngest son while he and I played. Without thinking about what I was doing, I constructed towers. Solid, tall, colorful, beautiful towers. During the few hours in the morning that he went to preschool, I went back into the room and kept building. I didn’t recognize what I was doing that first week. I built with those legos until the tips of my fingers were sore.

Solid lego towers use up hundreds of bricks. Eventually they were needed for other buildings. There were castles and shops. Airports. Pizza parlors. Slowly my lego towers were taken apart and used again. It’s an apt metaphor. When disaster strikes, work through grief, then build and rebuild, not to put the past aside but to use it as a base for an ongoing life.

I have one tower left. It’s not the biggest, or the prettiest, but I’ve had it above my office bookcase for years. It’s solid all the way through. 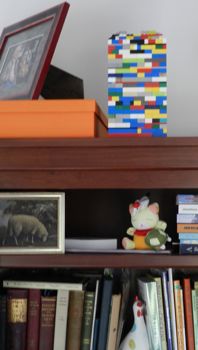