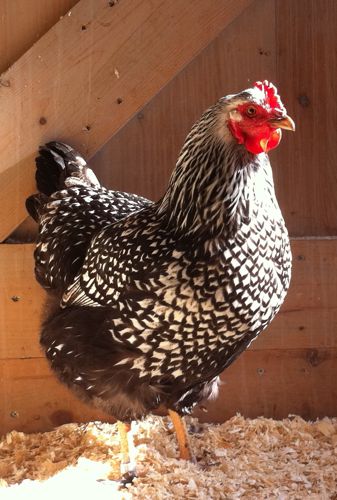 Maizie was not a friendly bird. She started off life as a mail order chick. She and about two dozen peeps arrived at an urban farm to be used in their educational program. By the time I got her as a pullet, she had had it with humans. I understood and let her be. She was bossy, but she was beautiful, and she laid eggs steadily for three years. Since last winter, though, she hadn’t laid a one. I kept her with the flock of old, retired hens.

She’s a bird I didn’t interact much with, still, I knew her well; she’s been in my flock for four years. A few weeks ago I noticed that she didn’t carry her tail with quite as much aplomb as usual, and she wasn’t the first into the morning scrimmage for corn. This isn’t uncommon with older birds. They get arthritis. They slow down. But about two weeks ago it was clear that something was truly off. She had runny manure stuck to her usually pristine fluffy vent feathers. I didn’t see her scratching in the compost. Then this week she took a turn for the worse. Maizie stood aloof, in a tail down, upright stance – a bit like a penguin. A healthy chicken’s head is at one point of a triangle, the tail at another. A sick chicken stands more upright. Maizie’s abdomen felt like a water balloon. For the last few days, when I picked her up, brown fluid poured out of her beak. Every morning I expected to see her dead, and yet there she was, standing with the flock. It is a tribute to what a bossy hen she was that even in this state the other girls didn’t bother her. Finally, two days ago she stopped roosting and so I put her into a straw-bedded private coop.

I could tell by posture and behavior that Maizie was not well. But, beyond that with a chicken, it is impossible to know what she was experiencing. I’ve had chickens with gaping wounds that acted as if nothing was amiss. I’ve had chickens with oviduct blockages that didn’t show any symptoms until a few days before death. Some might call it stoic, but that implies a conscious decision to overcome adversity. I think that a chicken divorces herself from illness and just keeps on ticking. They are hurting – that’s why they’re moving differently – I know there is pain. But how they register it not known. Chickens have an innate reaction to disease. They act as if nothing is wrong for as long as is physically possible. After all, if you live in a group with a pecking order that can become lethal if it becomes disturbed, and when you are on every predator’s dinner menu, you don’t show weakness.

Maizie died yesterday. Since she hadn’t laid an egg for a long time, I doubted that it was an oviduct or internal laying problem. I guessed that she had peritonitis, or some similar infection. I did a necropsy. I was right about it not being a reproductive issue. I was wrong about it simply being an infection of some sort. Maizie’s intestinal tract was twisted and tumorous. Organs were distorted and discolored. She had cancer. I’m sure she’d lived with it for a long time.

In the end Maizie was terribly skinny. She had not a bit of yellow fat anywhere in her body, and her flesh was a thin sheet on the bones. I hadn’t realized that she wasn’t eating because up until this last week she moved with the pack, roosted and came out to see what I had in the compost bucket. I’ve always thought it was a kindness to let my chickens live out their days to the very last, but I’m rethinking that. The next time one of my old chickens looks “off” I’ll be more observant. When other, serious symptoms appear, I’ll hand feed the hen. If she doesn’t eat, I’ll know it’s time. I’ll euthanize her and spare her the week or two of slowly petering out.