Betsy is the sweetest little hen. I take her to preschools and forty children line up to pet her. See? I don’t even have to hold her. She sits in my lap. 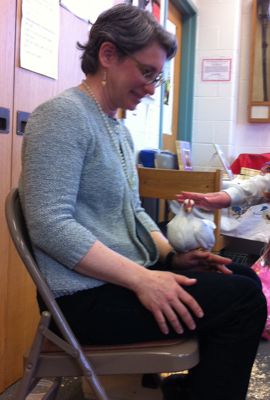 But, Betsy has been crazy-broody. Angry, raspy-voiced, flattened in the nesting box broody. It’s been hot. I’ve ignored her. Which was a mistake.

Animals have the uncanny ability to get into trouble when you are running out the door and don’t have time to deal with them. Yesterday, about ten minutes before I had to pick my son up at school, I checked on the flock. It was hot and I wanted to make sure there was enough water. Betsy, in her bad, shove everyone out of her box mood, had stomped on eggs (that other hens laid that day) smashing them. Once broken, she recognized the eggs for what they are, food. By the time I looked in, her white breast was shellacked bright yellow with dried-up yolk. It looked like half of her had been coated with a thick coat of paint. On a humid, very hot day, this could be lethal. I scooped her up and hurried over to the outside faucet. I held her chest under running water, working the baked-on yolk off bit by bit. It certainly brought her elevated broody body temperature down! I now had about three minutes before I had to pick up my son. I tossed Betsy in the broody coop, gave her some fresh water and headed out.

A few hours later, back home, I checked on Betsy. Despite the 90º temperature the air was so humid that she was yet to dry. Thunderstorms threatened. So, instead of making dinner, I brought her inside, got out the hair dryer, and went to work. Her crop was the size of a golf ball. On a tiny bantam, that is way too huge. I could feel sharp bits of egg shell in it. Now I was worried about impaction. So, I mixed some canola oil and yogurt and offered it to her. Betsy is a hen who is usually eager to eat and is used to being fed from my hand. She was too stuffed to even peck. I dipped her beak in the concoction and she swallowed a little.

I finished the blow drying and put Betsy back in the coop just as the storm hit. It was raining buckets. Even running as fast as I could back to the house, I got soaked.

This morning Betsy was put right back in the broody coop. She has water and a small piece of watermelon. She doesn’t have any other food – her crop is getting smaller but it’s still full enough. I know she’s fine. She’s pooping and she’s glaring at me. 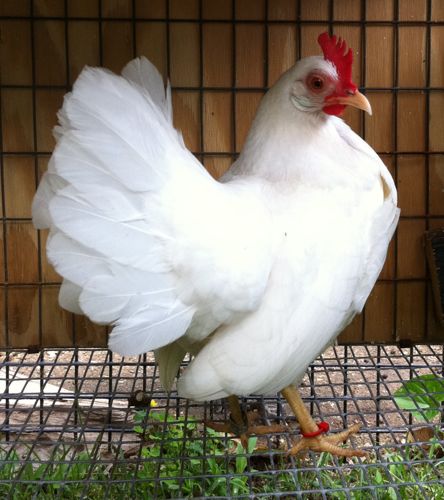 I’m hoping it’ll be only two more days before she back to her sweet self. I’m also hoping she’ll forget about the egg eating. When werewolves turn back into people they forget their evil ways, right?