While I was off in England, Steve had a crisis here at home. On Sunday night he noticed that Lulu’s breath sounded a tad raspy. On Monday morning she obviously had a respiratory ailment. He did exactly the right thing – isolated her in a crate, moved her indoors to keep her warm, and evaluated her condition. By late Monday morning, Lulu’s eyes were gunking up and swelling shut. It seemed like a clear case of mycoplasma. We’ve had it here before, so he knew what to do and we had the antibiotic, Tylan, on hand to treat her. But, it wasn’t enough. Lulu died Monday night. She was a beloved character and is already sorely missed.

Mycoplasma spreads fast. On Monday, Maizie showed symptoms. Steve started her immediately on the Tylan. She didn’t get better, so Steve hurried her to an avian vet on Tuesday. The vet confirmed that it looked like mycoplasma and put her on Doxycycline, an antibiotic known to be potent against the disease. Maizie will get half a 100mg pill once a day for ten days. The rest of the hens were put on Tylan, via the drinking water, as a preventative measure. England was dry, but here it’s been raining and drizzling non-stop, and there are puddles in the run. The hens have to drink their medicine, not rainwater, and so they’ve been closed up in the coop. No one has been happy.

I knew what was going on. Steve has been texting me. Fortunately, I was staying with hen keepers who understood how I could get so sad over the loss of a chicken. I came home from my trip late last night. First thing this morning I went to the coop and carefully inspected the hens. Siouxsie’s left eye was swollen shut. I fixed up a crate for her in the basement. Maizie is still down there. I fed them scrambled eggs (which otherwise would have to be thrown out because of the antibiotics in the water.) Maizie ate. Siouxie did not, but she did drink a lot. I got sand to spread in the run and rid it of puddles. The hens came out, but that meant that Candy had to stay in. I can’t risk her drinking the medicated water.

We have instituted strict biosecurity to keep the chicks as safe as we can. My new, clean pink boots from England will be worn in the big barn. My old red ones will be worn in the infected HenCam coop. I have a different jacket to wear for each barn. Hands will be washed before going to the chick’s enclosure. I won’t be handling the chicks at all. I’m hoping these steps will be enough. So far, the chicks show no sign of disease. I don’t know where the Mycoplasma originated. Maybe one of my old hens was a carrier and Lulu was susceptible. Maybe a wild bird brought it in. Few backyards are free of it. Mycoplasma is virulent when in a body, but dies quickly outside the bird in the sunshine. I’m hoping that things will dry up, but we’re not supposed to get blue skies until Sunday.

I’ve known people who, when Mycoplasma swept through their flocks, decided to cull all the hens, wait half a year and start again. I know others that keep a couple of chronically affected chickens. Sometimes Mycoplasma kills all the birds within the week, and sometimes antibiotics saves half your flock. Going to a veterinarian is not a necessity. The vet will only tell you what you already know – that you need to treat with Tylan. In the United States, you can get drugs on-line and in feed stores. Even if you have access to an avian vet, few of them have experience with chickens. The decision to go to a vet is difficult. It will be expensive. Although we hate to put a price on our animals, we have to. How much are you willing to spend on your chickens? Will spending that money make a difference? I think that it is realistic to have limits. Around here, an office visit is $65. The drugs this time came to another $30. However, going to the vet enabled Steve to get pills that are more potent than the widely available powders. Hopefully, that will save Maizie. Steve also decided to take the extra step and have a blood sample sent to a lab to confirm the mycoplasma diagnosis. Having peace of mind that we know what the disease is will cost us $137. (I’ll post as soon as the results come in.) I have a friend who lost a couple of birds to disease. Her other hens are fine. Finances are tight. She decided not to do a lab test. That was a good decision, too.

I don’t know how this will all settle out. Siouxsie is making sad chirrups sounds. Maizie is eating, but weak. We’ll do what we can.

Lulu has been buried in the meadow. 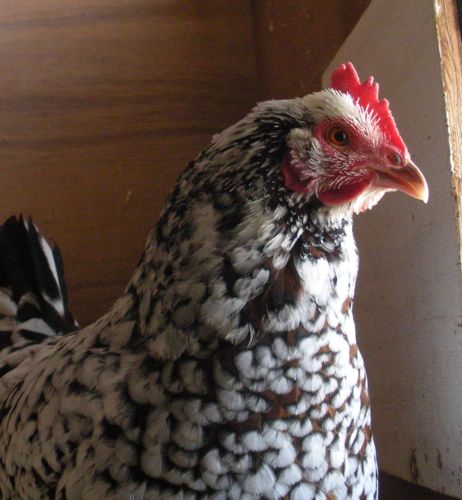