The chicks are ordered and due to arrive sometime this week. Waiting for a chick delivery is worse than waiting for an appliance truck – for the latter you block out a half-day, but for chicks you block out the week and wait by the phone for the call from the post office to hurry down for the noisy box.

My nursery is ready. It’s taken awhile. The first step was to move the old hens out of the big barn and into the HenCam coop. Then the big barn got a thorough cleaning. Diseases lurk in dirt and the cracks in wood, but the worst culprit is dust. Chickens are dust generators, and cobwebs hold it all in place. I got out the shop vac and hoovered it up. In some places, like the beams above the windows, the dust was a quarter-inch thick. I got static shocks while vacuuming!

Meanwhile, my crack IT team (aka husband Steve) bought a new cam, installed it, fixed the web site so that it can be viewed, and did lots of stuff I don’t understand but is absolutely necessary to share the chicks with you.

I went to an appliance store and got the perfect box to build a brooder. A brooder is what the chicks will live in for the first few weeks. It has to be draft-free and hot – 95º F to start. Thanks to my crack construction crew willing to climb a ladder (aka husband Steve) the heat lamp is on an adjustable chain. Each week it will be raised and the temp in the brooder reduced.

Here is the brooder. You can see the camera mounted on the right: 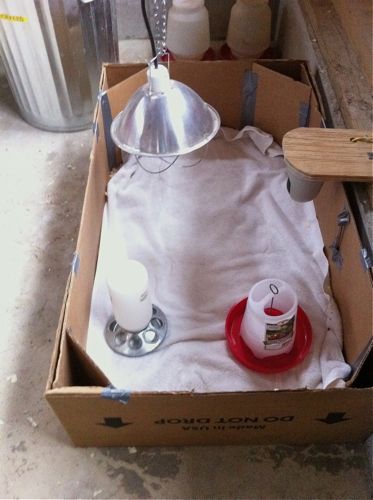 For the first two days the chicks will be walking on that old towel. This gives them secure footing (newspaper is too slippery.) After the chicks learn to eat their chick ration, the towel will be removed and they’ll be on pine shavings. If the chicks were to start on the shavings they would eat them, and possibly get impacted. It’s best for them to get the knack of eating the right stuff, first!

Note that I’ve blocked off the corners. Chicks have been known to walk into corners and get stuck. They don’t know how to turn around. Never underestimate the trouble that a chick can get in.

The chicks will grow quickly, and as soon as the box becomes crowded, they’ll have the run of the barn. You can see there’s a lot of space. 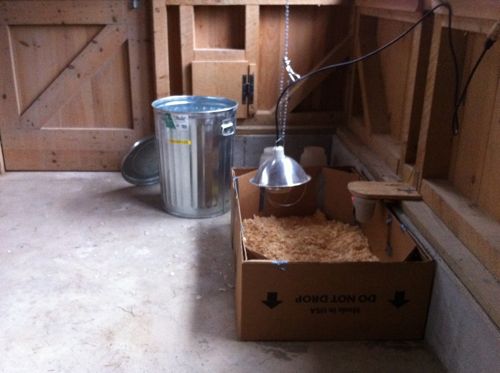 But, even growing chicks need protection from drafts, so I have more cardboard to make a barrier to cold air that might blow in under doors. Also, as they grow they’ll want to get higher and roost. I have a branch just the right size to make a perch for little feet.

As soon as the chicks arrive we’ll turn the ChickCam on. Keep an eye on the HenCam home page – there will be a new button to click on for that camera. I’m hoping my friends at the post office will call me tomorrow. They’re almost as excited as I am!